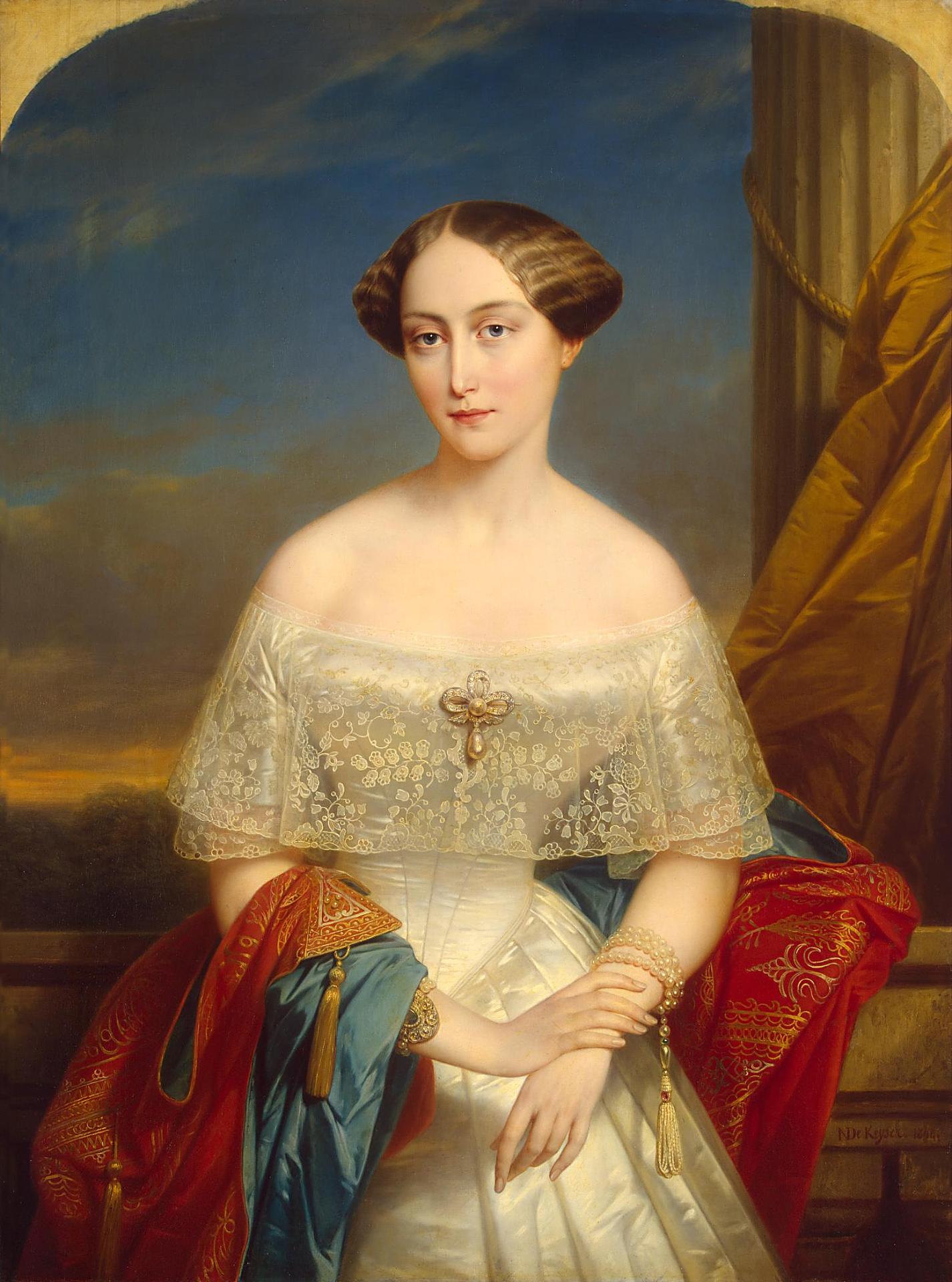 Portrait of Grand Duchess Olga Nikolayevna by Nicaise de Keyser, 1848
.
She had a very unhappy marriage. Here she is still young, married only for two years. On this painting she is 26 years old. She never had any children. 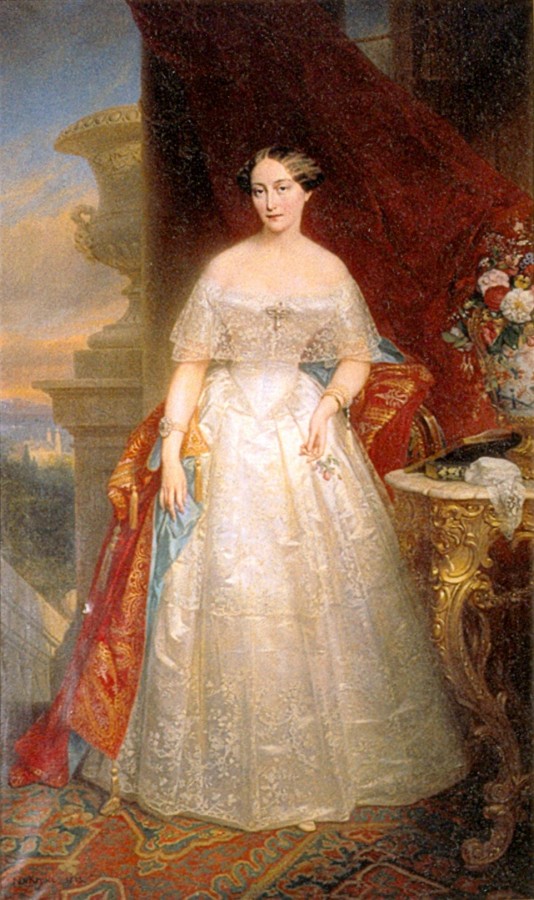 She was the second daughter of Nicholas I of Russia and Charlotte of Prussia. She was thus a sister of Alexander II of Russia. She married Charles I of Württemberg, with whom she had no children.

Attractive, cultured and intelligent, she was considered to be one of the most eligible princesses in Europe. She spoke several languages, and was fond of music and painting. Olga met Crown Prince Charles of Württemberg in early 1846 in Palermo, Two Sicilies. Her parents wished that she make a dynastic marriage, especially since her siblings Alexander, Maria and Alexandra had married relatively insignificant royal partners. There had already been several marriages between members of the Russian Imperial Family and members of the Württemberg Royal Family (in addition to the marriage between Olga’s paternal grandparents): Olga’s future father-in-law, King William I of Württemberg, married Olga’s paternal aunt, Grand Duchess Catherine of Russia; Olga’s paternal uncle, Grand Duke Michael of Russia, married William I’s niece, Princess Charlotte of Württemberg.

Olga gave her consent to Charles’ proposal of marriage after only a few meetings, on 18 January. The wedding was held in great splendor on 13 July 1846 at the Peterhof Palace, Russia. The couple came back from Russia to Württemberg on 23 September. They lived mostly in the Villa Berg in Stuttgart and in the Kloster Hofen in Friedrichshafen.

The couple had no children, probably because of Charles’ homosexuality. Olga’s husband became the object of scandal several times for his closeness with various men. The most notorious of these was the American Charles Woodcock, a former chamberlain whom Charles elevated to Baron Savage in 1888. The resulting outcry forced Charles to renounce his favourite. In 1863, Olga and Charles adopted Olga’s niece, Grand Duchess Vera of Russia, the daughter of Olga’s brother Grand Duke Constantine.

On 25 June 1864, after the death of his father, Charles acceded the throne and became the third king of Württemberg, making Olga the fourth queen of Württemberg. The new king was enthroned on 12 July 1864.

With no children of her own, Olga dedicated her life to social causes. She was especially interested in the education of girls, and also supported wounded veterans and the handicapped. A children’s hospital of Stuttgart, the Olgahospital, was named for her in 1849; and an order of Protestant nursing nuns of Stuttgart, the Olgaschwesternschaft, was named for her in 1872. These charitable enterprises made her very popular among her subjects, much more so than her husband.

Olga was fond of agriculture and was keenly interested in all happenings on her farming estate which was located in the German Volhynia colony of Russia. She received detailed reports from her ward Karl Alexander Wieler, a Württemberg orphan, who managed her estate and would rise to prominence in Russia’s Imperial government owing to this Imperial association.

Olga was also very interested in natural science and collected minerals systematically. Her collection was left to the Staatliche Museum für Naturkunde in Stuttgart. As of 2011 part of the collection is still on display. Her name is attached to a geological formation in the Northern Territory, Australia. In 1871, Charles elevated the German-born Australian explorer Ferdinand Mueller to “Baron von Mueller”. He repaid the compliment as follows. A series of massive rock formations was discovered by the British-born Australian explorer Ernest Giles in central Australia in 1872. Mueller was Giles’ benefactor. Giles had wanted to name the tallest peak Mt. Mueller, but Mueller prevailed on Giles to name it Mt. Olga, in honour of the queen. The entire geological formation then became known as “The Olgas”, before the indigenous name “Kata Tjuta” was officially proclaimed in the 1980s.

Olga was noted for her dignity and queenly demeanor. On a visit by the royal couple to Austria in July, 1873, a lady-in-waiting to Empress Elisabeth of Austria noted, “He is most insignificant. She makes a most imposing appearance … the only one who is a queen …”

In 1881, Olga wrote a memoir called Traum der Jugend goldener Stern (translated as The Golden Dream of My Youth) which described her childhood in the Russian court, her grief at the loss of her sister Alexandra, and her early adult life, ending with her wedding to Charles. It is dedicated to her nieces Grand Duchess Olga of Russia and Grand Duchess Vera of Russia.

When her husband died on 6 October 1891, Olga became Queen Dowager of Württemberg. She died one year later, on 30 October 1892 in Friedrichshafen, at 70. She was buried in the crypt of the Old Castle in Stuttgart.