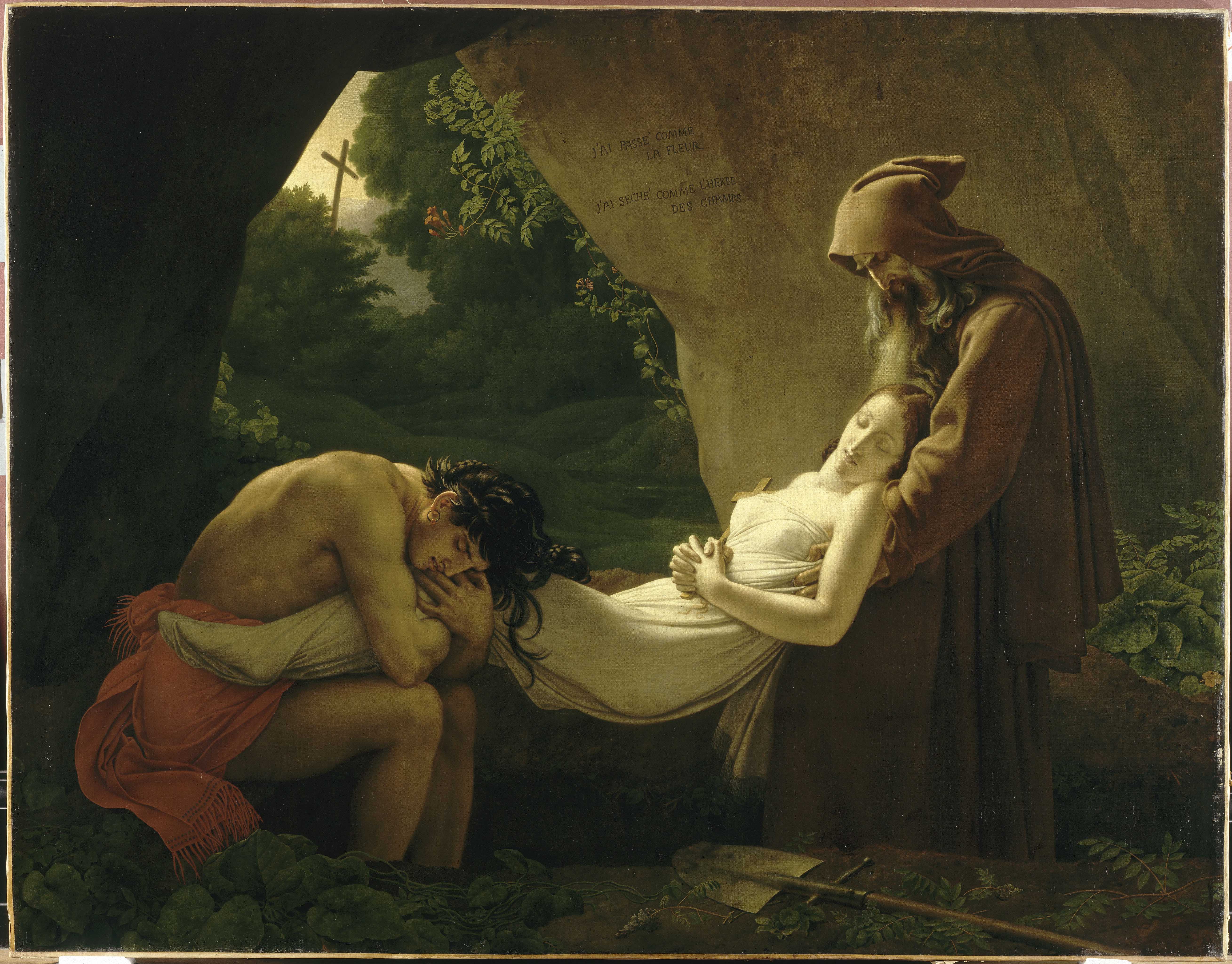 The Entombment of Atala by Anne-Louis Girodet de Roussy-Trioson, 1808

Chactas the Indian and Father Aubry are burying Atala, heroine of Chateaubriand‘s novel, published in 1801. Everything about this funerary elogy – the Christian subject, the exotic setting, intense emotions – must have appealed to those who, on the fringes of David‘s rigor, remained attached to the sacred, to nature and sentiment.

A young woman torn between love and religion: In the sunset, in a cave, the old hermit, Father Aubry, is supporting the corpse of the half-caste Atala. Chactas the Indian, stricken with grief, clings passionately to the young woman’s knees. Atala, torn between her love for Chactas and the vow she took to remain a virgin and a Christian, committed suicide. With a crucifix clutched in her hand and the drapery of her dress clinging to her bust, she is both pure and sensual. After their all-night vigil, the two men will bury her in the cave. A verse from the Book of Job is carved on the cave wall: “When it is yet in flower, and is not plucked with the hand, it withereth before all herbs.” Girodet drew his subject from Chateaubriand’s Atala, or the Loves of Two Savages in the Wilderness (1801), set in America in the 17th century.

This novel by the first French romantic novelist was published in his hugely popular The Genius of Christianity. The book celebrated Catholicism at the time when Bonaparte signed the Concordat with the Church. The exoticism, the defense of the innocence of primitive peoples and the religious sentiment that characterized the novel are all transposed into the picture. Girodet has not merely illustrated a single scene from Chateaubriand’s novel, he has synthesized several passages. He has also forsaken the antique subjects dear to his master, David, for new subject matter: for Girodet, unlike David, painting no longer has a moral or political function.

An innovative painter: Girodet showed this painting at the 1808 Salon, where it was widely acclaimed. It was bought by the anti-Empire journalist Louis-François Bertin, who later posed for Ingres’ famous portrait (Musée du Louvre). Chateaubriand admired the painting, as did another romantic writer, Charles Baudelaire. Girodet, who had become famous at the 1793 Salon for his extremely strange picture, The Sleep of Endymion (Musée du Louvre), was an innovative painter, both in subject matter and style.

Neoclassicism and romanticism: Girodet used a traditional composition of Christian iconography, The Entombment, for this canvas. Yet, in the manner of his master, David, his figures are aligned in a frieze-like manner and his drawing is precise. The dead Atala is somewhat unrealistically portrayed as an ideal beauty, and Girodet reuses the chiaroscuro effect of The Sleep of Endymion: the light caresses Chactas’ back and Atala’s bust and lips. The picture, foreshadowing romanticism, is steeped in sensuality, emotion and religiosity, and the scene’s exotic setting and vegetation are a far cry from David’s austere decors.