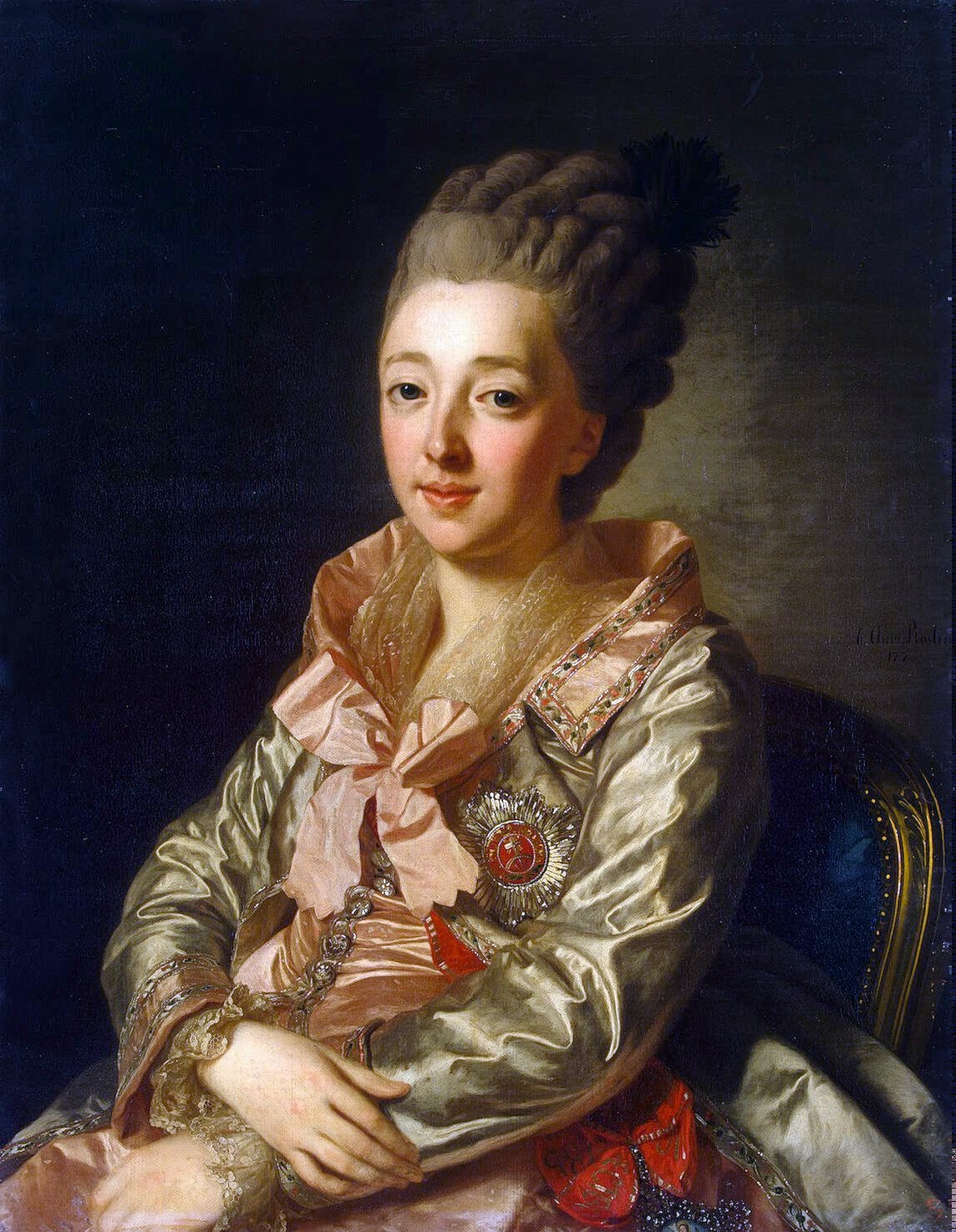 This painting was painted in the year of Natalia’s death. She was only 20 years old when she died after having given birth to a stillborn child 15th of April 1776. On this painting she is still expecting, full of expectations and hope.

Grand Duchess Natalia Alexeievna of Russia (25 June 1755 – 15 April 1776) was the first wife of the future Tsar Paul I of Russia, the only son of the Empress Catherine II. She was born as Princess Wilhelmina Louisa of Hesse-Darmstadt in Prenzlau, Uckermark, Brandenburg, Prussia as the fifth child of Louis IX, Landgrave of Hesse-Darmstadt and his spouse Caroline of Zweibrücken, Countess Palatine.

In 1773, the Empress Catherine II of Russia was looking for a suitable wife for her son Paul and turned to King Frederick II of Prussia for “recommendations”. The King thought about the remaining three unmarried daughters of the Landgrave of Hesse-Darmstadt. Unable to decide which one was worthy, the Empress sent an invitation to Wilhelmine, her sisters Amalie and Louise, and their mother to visit Russia. Hurriedly, the three Princesses studied to perfect their French, worked on their dancing, practiced dropping deep curtseys, and completed their wardrobes. Their first stop was in Berlin where from there a flotilla of four ships, sent by the Empress Catherine, took them to Russia. It was the Grand Duke Paul’s best friend, young Andrei Razumovsky, who commanded the frigate that carried the young ladies and their mother. He was immediately captivated by these charming passengers, and was particularly taken with Wilhelmine. She was not insensible to the admiration of Andrei.

Two days after arriving in Russia, the Grand Duke Paul chose Wilhelmine to be his wife. Wilhelmine was very pretty, gay and exuberant, and Paul was very delighted with her. Their betrothal was celebrated with great ostentation and Wilhelmine changed her religion and her given name: she became Natalia Alexeievna. On 29 September 1773, the wedding took place in the church of the Nativity of the Mother of God.

During the first few months of her marriage, Natalia’s gaiety and spontaneity animated the whole court. The Empress was delighted with her initially, but as time passed difficulties started to appear. Paul and Natalia’s marriage was a failure. Paul’s mother wrote that Natalia “loves extremes in all things. She will listen to no advice, and I see in her neither charm, nor wit, nor reason.” Natalia refused to learn Russian and schemed to help Paul win the throne. She felt such a need to accede to power because of her disappointment in her life as a woman, and also disappointment with her husband. She fell in love with the charming Andrei Razumovsky and the two started an affair. Unfortunately for Natalia, the whole court knew of her infidelities. Andrei was supposed to be sent away from the palace but Paul, who knew nothing of the situation, protested against his best friend’s departure. At the same time, Natalia was pregnant, and Catherine didn’t seem to care if the child was Paul’s or Andrei’s. Natalia was carrying the heir to the Russian throne, and for Catherine, that was all that mattered.

Natalia finally delivered a stillborn son, after a long and painful labour, on 15 April 1776. The infant was enormous and although it was impossible for Natalia to safely deliver the child, the court doctors did not perform a Caesarian. Shortly after the delivery, Natalia died. Her husband, Paul, was mad with grief and insisted on keeping her with him. The Chevalier de Corberon questioned the surgeon Moreau during a dinner, and he wrote, “He [Moreau] told me privately that in his opinion, the surgeons and doctors of the court were asses. The Grand Duchess should never have died. In truth, it is very surprising that greater care is not taken in advance with a Grand Duchess. The people are very angry, weeping and bitter. Yesterday and today, people in shops were heard to say, ‘The young ladies die; the old babas never die.'” ‘Old babas’ (old women) was an allusion to Empress Catherine II.

Here below is another painting, by the same painter, also in the Hermitage Museum Collection, of a pregnant Grand Duchess. The only thing is that I don’t see any baby bump. Maybe she posed for the painting several months earlier. If the baby was huge, as it said on the Wikipedia bio, then I imagine we should see a lot more bump already if the baby was born in April. The date of this portrait really is correct however, for if you look closely it is written on the painting itself. You can see she has the same hairdo, the same order star and the same red sash. But if I had not looked at the dates of the two portraits I would never have guessed that the woman on the painting below was pregnant. It does not look like a pregnancy portrait. 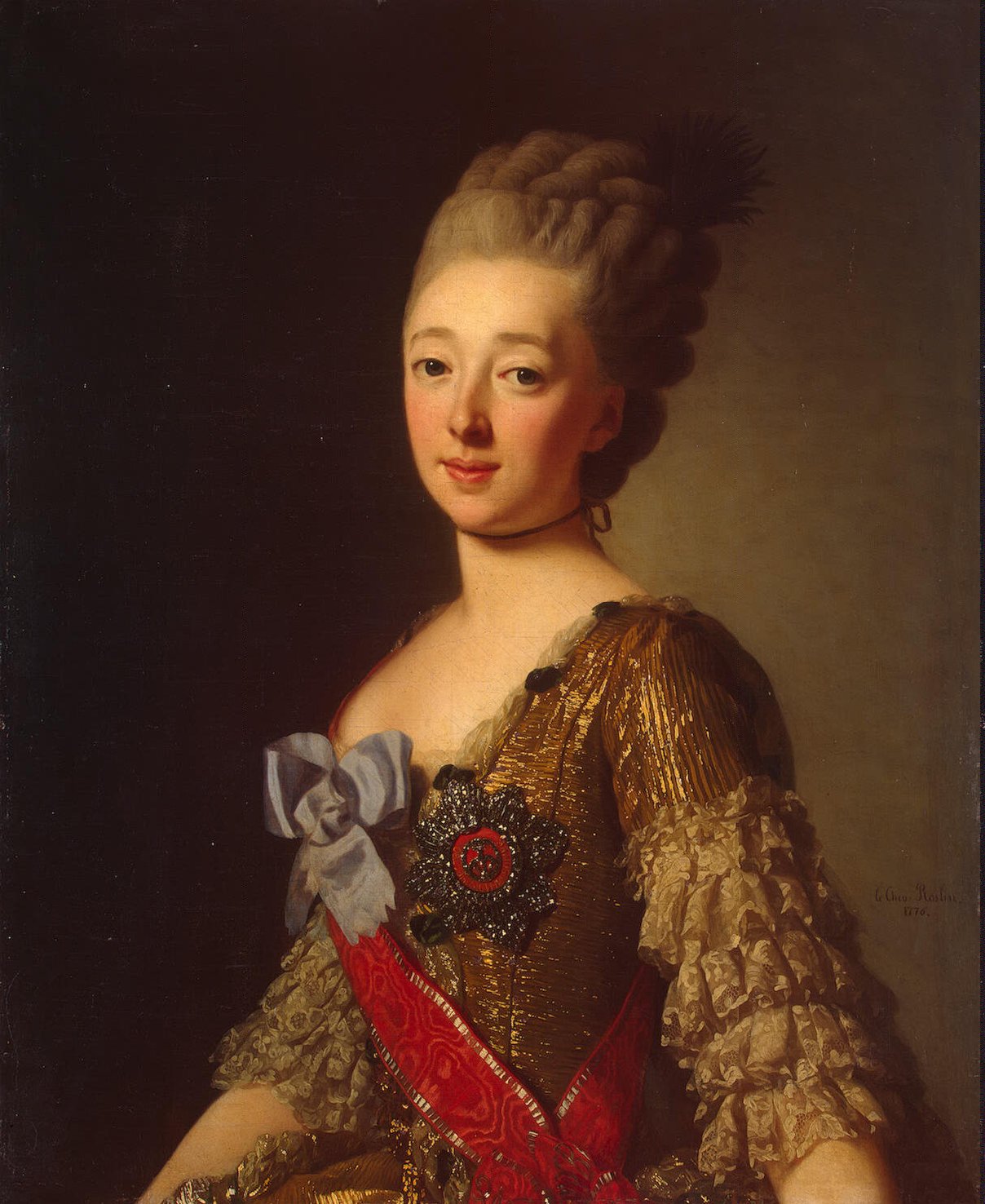