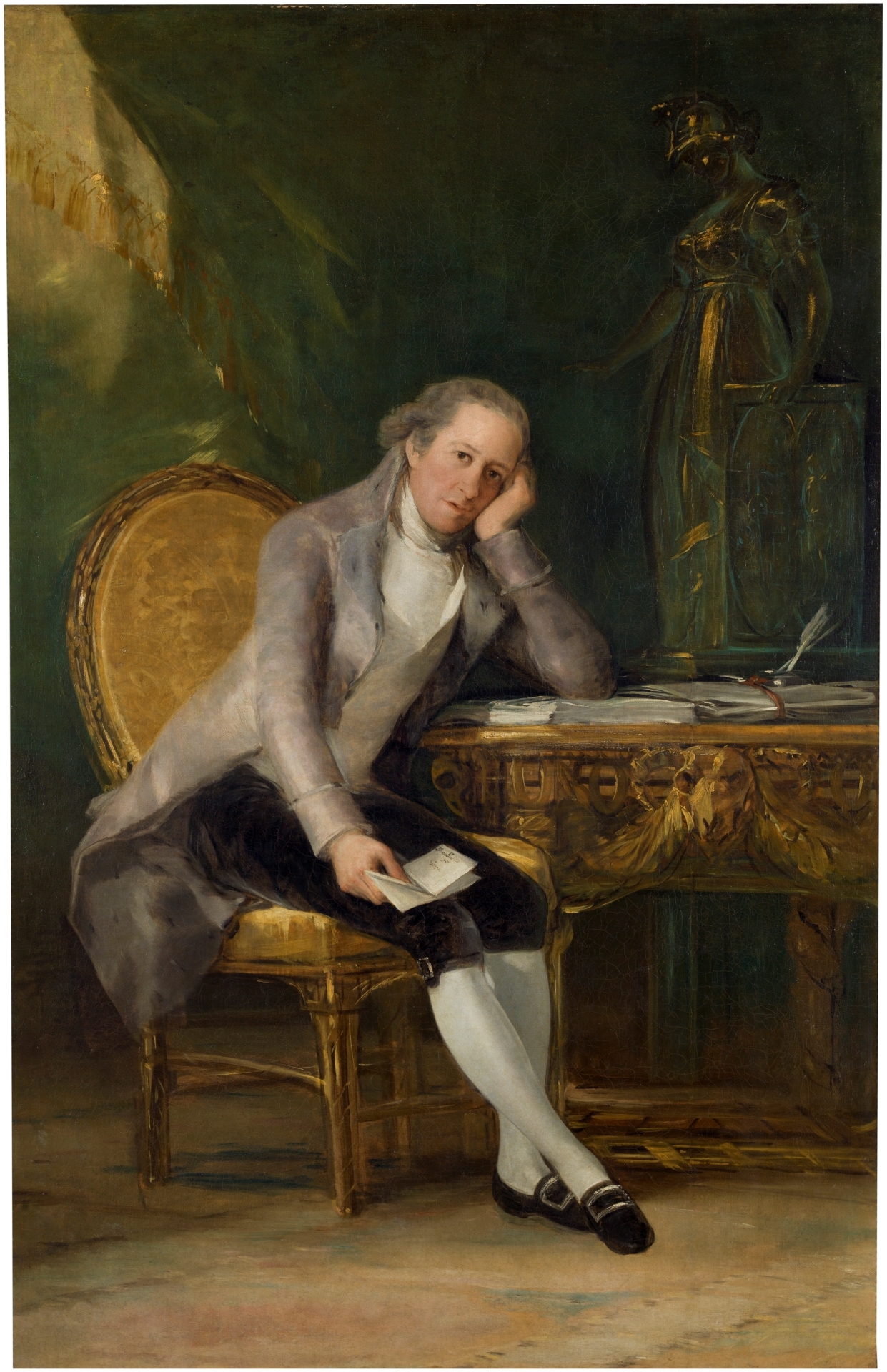 Gaspar Melchor de Jovellanos was one of the most illustrious representatives of the Spanish Enlightenment, a man of letters, writer and poet, as well as a statesman with advanced ideas. Born in Gijón in 1744, he received his Doctorate in Law from the University of Salamanca. He was interested in art and admired Goya from early on, having commissioned him to paint his portrait shortly after his appointment to the Royal Academy of San Fernando. In 1767, Jovellanos was named magistrate to the Criminal Court in Seville, and in 1778, magistrate of the Royal Family and Court. He moved to Madrid in 1780 when he was promoted to the Consejo del Real de las Órdenes (the Royal Council on Judicial Affairs). However, his defense of agrarian reform and economic freedom in the years that coincided with the French Revolution led to his banishment to Gijon, where, in 1794, he founded the Royal Asturian Nautical and Mineralogical Institute and wrote his Report on Agrarian Law. He returned to Madrid in November 1797, after Godoy’s fall from favor, and he was then appointed Minister of Grace and Justice. His jansenist reform of religious policy led to his fall from grace in August 1798 and his imprisonment in Mallorca from 1808 through March 1808. He rejected the post of Minister of the Interior under José Bonaparte, moving instead to Cadiz as the Principality of Asturias’s representative to the Supreme Central Board. He died on November 27, 1811 on the way to Gijon while fleeing the French.

This portrait, almost certainly painted in Aranjuez in April 1798, shows Jovellanos as Minister of Grace and Justice, the post he held at that time. He sits at a desk with numerous documents and a silver inkstand. Sober and elegant, he wears none of the medals or sashes that had been bestowed upon him. Instead, his intimate character is emphasized: a pensive expression, with his head resting on his hand in a position that had been a traditional representation of Melancholy since the 15th century. That affliction was associated with artists and symbolized creative genius. Known to his friends as Jovino, “the melancholy,” he is characterized as such in the role of an Arcadian poet in a poem by Juan Meléndez Valdés, and also here by Goya. The carved and gilded desk includes bucrania, which are attributes of Melancholy and symbols of the vanity of man, who only attains divine wisdom in death. Here, Jovellanos’s intellectual stature is also accentuated in the form of a bronze sculpture of Minerva, goddess of wisdom and the arts, who extends a protective gesture towards the sitter. The goddess’s shield bears the coat of arms of the Royal Asturian Nautical and Mineralogical Institute, which Jovellanos had promoted and of which he was very proud.

His position, seated at the table with head in hand, has been related to the artist’s own, as can be seen in his self-portrait from The Sleep of Reason produces Monsters, which is the 43 image of his contemporaneous Caprichos, published in 1799. Some of the precedents that have been suggested as possibly influencing Goya for that engraving would be equally valid for the figure of Jovellanos, including the engraving of the frontispiece of the 1793 edition of Jean Jacques Rousseau’s Philosophie, vol. II, which J. B. D. Duprée had engraved after a drawing by Charles Monnet; or the engraving for the frontispiece of volume I of the 1699 edition of the Works of Quevedo.