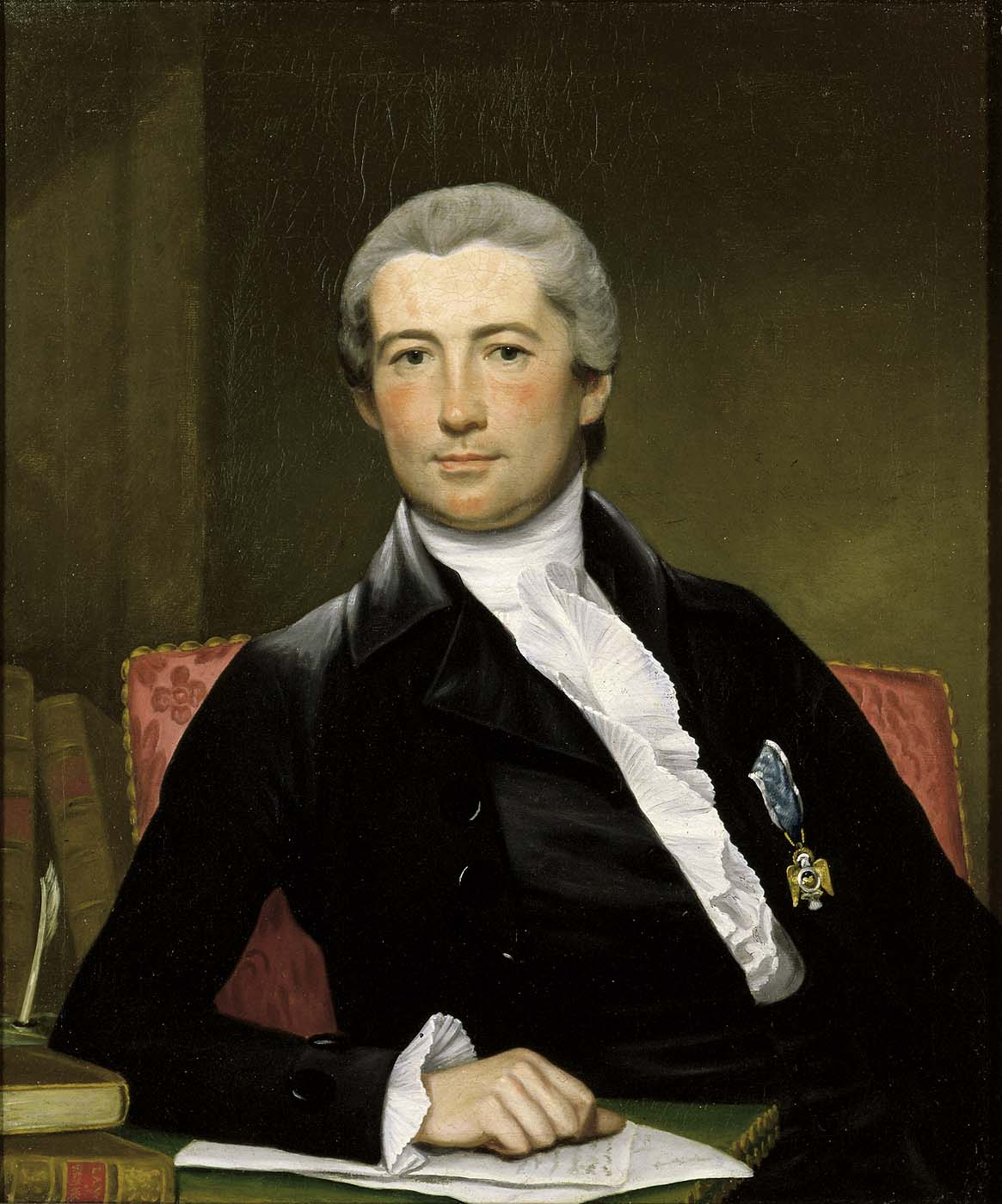 Based on the medal that General Giles displays on his coat, researcher Laura was able to follow clues that led to the discovery of a French sword belonging to General Giles and a contemporary account of Giles’s life written by his friend. These discoveries tell us more than we ever knew before about the life of General Giles; a man who served his country during the American Revolution.

Joseph Wright painted General Giles with the insignia of the Society of the Cincinnati prominently displayed on his jacket, indicating that he was a commissioned member of the Continental Army in the Revolutionary War. What else can we find out about the life of Giles and his participation in the American Revolution?

I formulated the above question after I had a chance to do some preliminary research by reading the curatorial files to find out what the museum already knew about this painting and after I had the opportunity to study the work in person. One of the first questions I wanted to answer was a question that is usually the first to be asked about a portrait, which is “who is this person?” We knew little about the artist Joseph Wright and even less about the sitter, General Giles.

From other research I had previously done on Revolutionary-era military portraits, I recognized that Joseph Wright painted General Giles with the insignia medal of the Society of the Cincinnati prominently displayed on his coat. This indicated to me that he was a commissioned member of the Continental Army in the Revolutionary War. Knowing this detail I was curious to see what I could find out about the life of Giles and his participation in the American Revolution. The curatorial files indicated that Giles’s given name was James, so with that information I began a genealogical search on several different databases. I was hoping that the information turned up in this search would provide me with names of relatives, dates, locations, or any other clues that could help. The essence of what I discovered was that James Giles was born in 1759/1760, died in 1823 and that he and his wife Hannah resided first in New York City and secondly Bridgeton, New Jersey, where he lived out the remainder of his life working as a lawyer. The search also confirmed that Giles was a member of the Society of the Cincinnati.

I then contacted the Society of the Cincinnati to see if they had any records on Giles. They provided me with a brief biography on Giles, and even though it was brief, it was enough to provide me with more clues and key terms that I could use to further my research efforts. The biography mentioned that that Giles had been awarded a sword and that as of 1877 it resided in the collection of the New Jersey Historical Society.

Further investigation into the whereabouts of and information on the sword revealed that presently the sword resided in the collection of the Morristown Historical Society in Morristown, New Jersey. A response to my request to their collections manager provided me images and information on the history of the sword and some further information on Giles himself. Apparently Giles had served under the command of the Marquis de Lafayette during the American Revolution and it was during this time that Giles received the sword along with a sword knot and scabbard. The sword was featured in an exhibition at Mount Vernon entitled “George Washington and His Generals” in 2009 and it is from the corresponding exhibition catalogue that we get the following information:

“Lafayette was in France trying to secure aid for the American cause in 1779. His purchased material consisted of “uniforms, swords, and other military accoutrements for all the commissioned and noncommissioned officers of his new command, the Continental Army’s Light Infantry. The much-needed goods arrived in Newport with Rochambeau in July 1780. Lt. James Giles of the Second Continental Artillery received [a] small sword, sword knot, and scabbard from Lafayette that September . . . Giles’ sword is a model 1767 French infantry officer’s sword. Its elaborately-engraved colichemarde (hollowed triangular) blade required training and skill to be thrust properly, and the weapon proved impractical in most combat situations. The sword knot was both decorative and functional: when looped around the guard, it prevented the sword from being lost if dropped.”

The sources that I had gathered about the sword led me to a contemporary account of the life of General Giles, written by his friend Lucius Elmer who, like Giles, was a lawyer by trade. Elmer describes Giles as “a small man, precise in his dress, and remarkably erect and graceful, but very slow in his movement, and in all he did. At the circuits he was one of the most genial and delightful companions . . . he was kind and friendly.”

Elmer writes that by 1771, Giles had entered into the study of law with Benjamin Helme in New York City. Sometime before 1776, Giles had joined the Continental Army, for in March of that year “he was appointed a Lieutenant in the 2d or New York Regiment of Artillery, continued in service until 1782, and during some part of the time was Adjutant of the Regiment. In 1780 he was attached to the command of LaFayette, and served under that distinguished friend of America in Virginia.” At this time Giles received the aforementioned sword. A transcribed anecdote written about the sword by Giles recalls Lafayette’s reception at the Society of the Cincinnati in 1824: “In September last I went to N.Y. for ‘e purpose of meeting General L. F., as I had served under his particular command. He was very glad to see me, and expressed himself highly gratified when I showed him ‘e sword he had presented to me in ‘e time of ‘e Revolution, and in his affectionate way thanked me for my remembrance of him in ‘e preservation of his gift.” The inscription on the hilt reads “Presented by the Marquiss LaFayette, Major-General of the Army of the United States, to James Giles, Lieut. In the 2d or New York Reg’t of Artillery, Sept. 9, 1780.”

After 1782 Giles seems to have put his military career on hold in favor of returning to his legal career and starting a family. In that year he became a student of New Jersey lawyer Joseph Bloomfield (later Governor of New Jersey, 1801-1812.) Giles became licensed to practice law in New Jersey in September of 1783 and in the following year he married Bloomfield’s sister Hannah. Additionally, Elmer writes that in the early part of 1784 Giles “was licensed as a lawyer in the courts of New York, and appears to have resided and practiced in that city several years after his marriage.”

In 1788, Giles and his growing family of five moved to Bridgeton, New Jersey. In 1793, Giles built “a good house, which for many years was, with its ornamental grounds and furniture, the best residence in the place; and he accumulated the largest library, both of law and miscellaneous books, in South Jersey.” In the same year Giles briefly returned to his military roots when he was commissioned as Brigadier General of the Cumberland (County, NJ) Brigade of Militia. Giles would live out the rest of his life in his Bridgeton home, dying there on July 23, 1825.

Elmer, Lucius Quintius Cincinnatus. The Constitution and Government of the Province and State of New Jersey, with Biographical Sketches of the Governors from 1776 to 1845 and Reminiscences of the Bench and Bar During More Than Half a Century. Newark, NJ: Martin R. Dennis and Company, 1872.

Schulz, Emily L. and Laura B. Simo. George Washington and His Generals: A Companion to the Exhibition on Display, February 21, 2009 through January 10, 2010 in the F. M. Kirby Foundation Gallery at the Donald W. Reynolds Museum and Education Center at Mount Vernon. Mount Vernon, VA: The Mount Vernon Ladies’ Association of the Union, 2009.