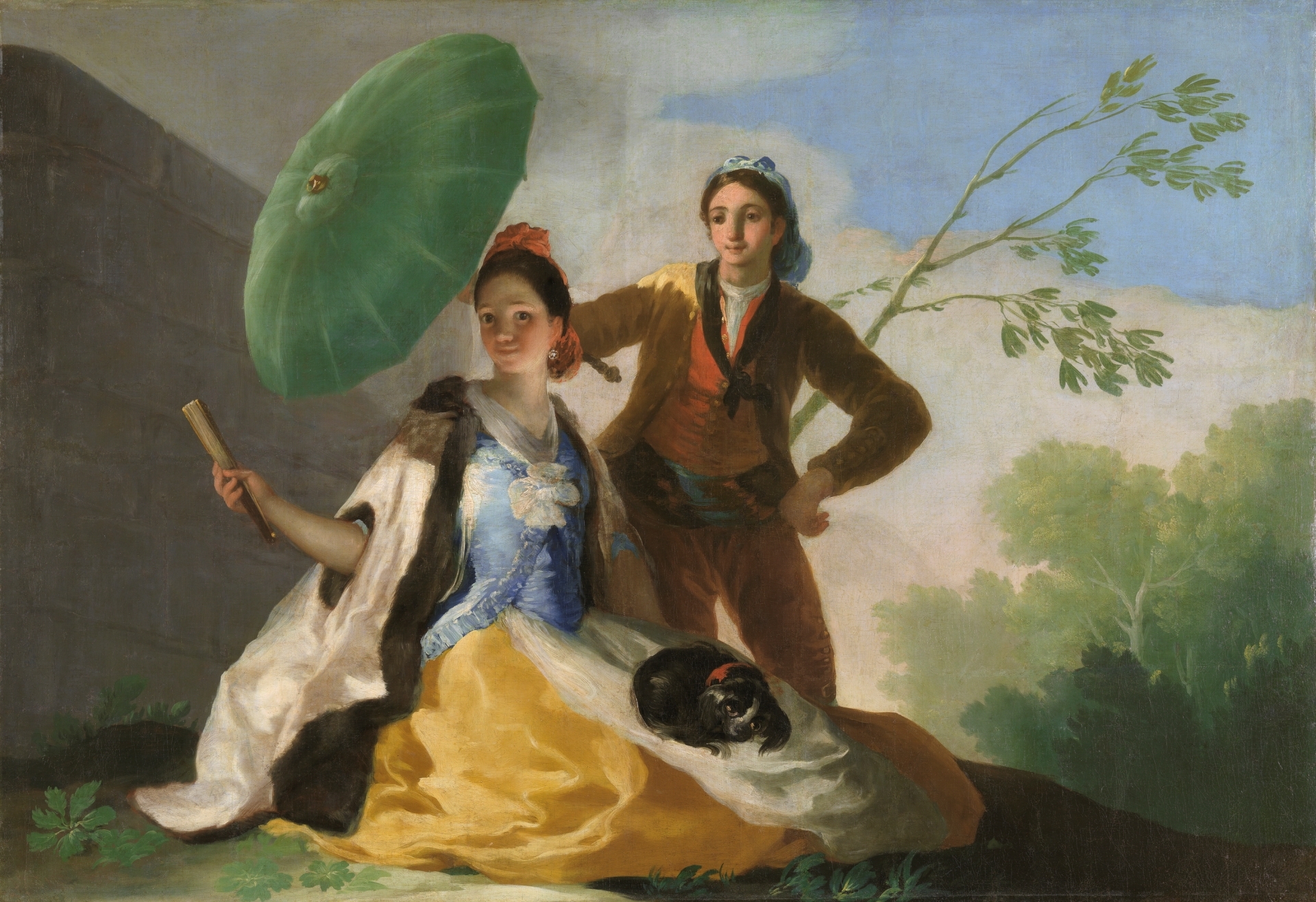 This tapestry cartoon depicts a young woman. She is sitting, with a dog on her lap, and is accompanied by a Majo who protects her from the sun with a parasol. This work’s format and bottom-to-top perspective indicates that it was intended to hang over a window. It’s pyramidal composition, with the figures in the foreground, reflects the influence of classical Italian painting on Goya, as well as his mastery at painting light and shadows. The resultant tapestry was intended to hang in the dining room of the Prince and Princess of Asturias (the future Carlos IV and his wife Maria Luisa de Parma) at the Monastery of El Escorial. This work was part of a decorative series of ten cartoons for tapestries on “countryside” subjects. Goya, himself, invented the specific composition of the present one. This work entered the Prado Museum Collection in 1870 by way of Madrid’s Royal Palace.

The Parasol (also known as El Quitasol) is one of a cartoon series of oil on linen paintings made by the painter Francisco Goya. This series of paintings was specifically made in order to be transformed into tapestries that would be hung on the walls of the Royal Palace of El Pardo in Madrid, Spain. The tapestries showed serene events in everyday life, which made them a nice addition to the dining room of Prince and Princess of Asturias—the future King Charles IV and Maria Luisa of Parma. The queen called on Goya because she wanted to decorate the dining room with cheerful scenes; The Parasol and the other tapestry paintings were Goya’s response to this request.

In his paintings, Goya often joins French fashion to the Spanish one. The woman in this particular painting is sitting on the ground, possibly resting from a long walk. She is dressed in French style, according to the time period. She is holding a fan in her right hand, while a little dog is cuddled in her lap. The young man is holding the parasol (umbrella) in order to shade the woman’s face. He is dressed in the so-called majo style, meaning he is dressed like a poor person for the time period. His hair gathered in a net, and his belt is made of colorful silk. In the background we can see dark clouds in the sky and the trees swaying in the wind, possibly signaling a storm coming. The painting has very calm warmth it emits, which is then offset by the tree that seems to be blowing in pretty strong wind. The way the boy is standing, with one foot on the rock and one not, he seems to be triumphantly shading the woman from the harmful rays of the sun, and the possible storm.