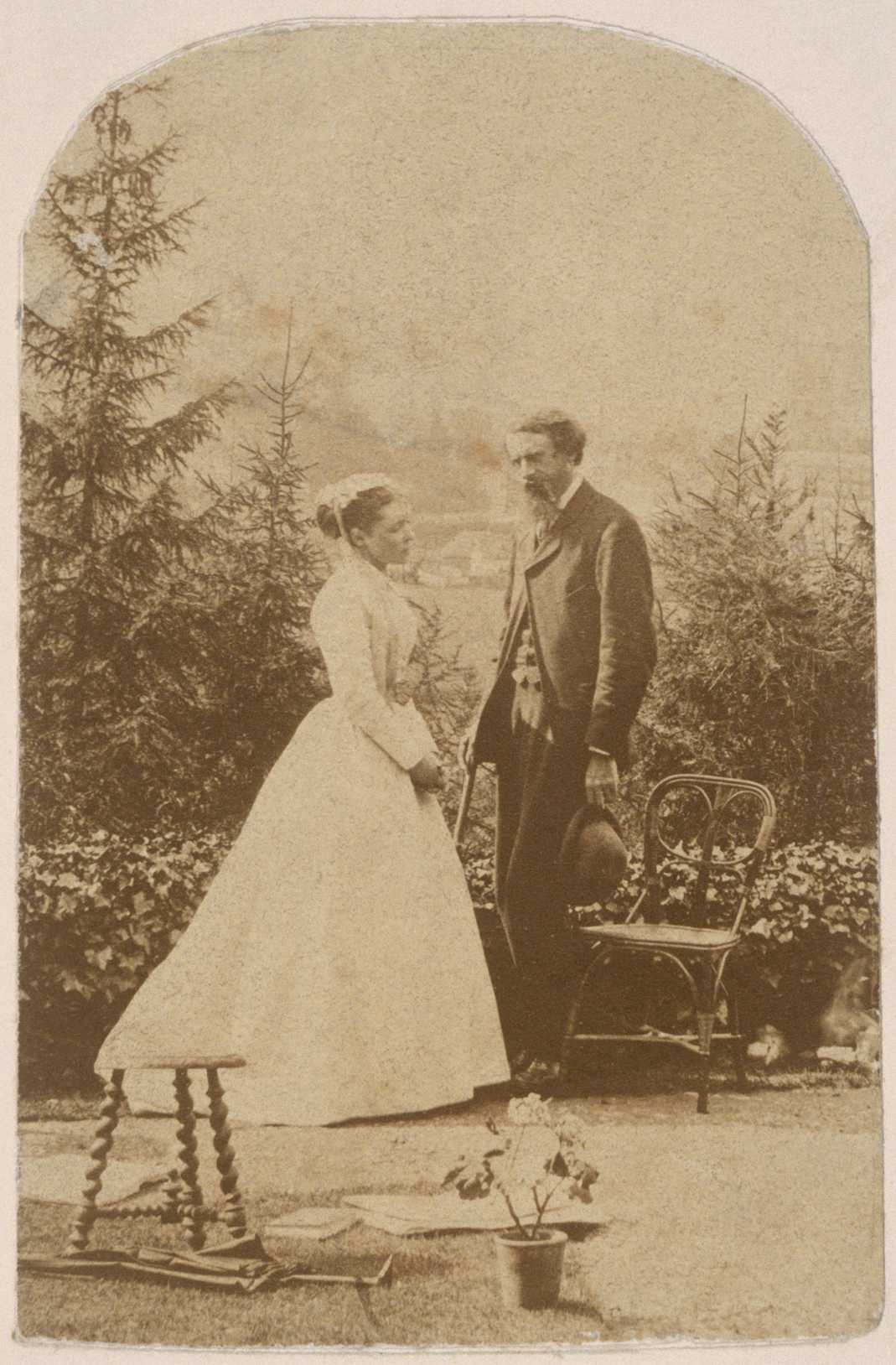 Minny was the youngest daughter of the novelist William Makepeace Thackeray and Isabella Shawe, who suffered a mental breakdown in 1840. Minny and her older sister, the novelist Anne Isabella Thackeray Ritchie (1837-1919), were friends of Leslie Stephen’s mother and sister, as well as Stephen’s second wife, Julia Jackson.

Leslie’s sister Caroline met Thackeray’s daughters, Anny (1837–1919) and Minny (Harriet Marian Thackeray 1840–1875) when they were mutual guests of Julia Margaret Cameron. This led to an invitation to visit from Leslie Stephen’s mother, Lady Stephen, where the sisters met him. They also met at George Murray Smith’s house at Hampstead. Minny and Leslie became engaged on December 4, 1866 and married on June 19, 1867.

After the wedding they travelled to the Swiss Alps and northern Italy, and on return to England lived at the Thackeray sister’s home at 16 Onslow Gardens with Anny, who was a novelist. In the spring of 1868 Minny miscarried but recovered sufficiently for the couple to tour the eastern United States. Minny miscarried again in 1869, but became pregnant again in 1870 and on December 7 gave birth to their daughter, Laura Makepeace Stephen (1870–1945). Laura was premature, weighing three pounds.

The couple had one living child, Laura Makepeace Stephen (1870-1945) who was born prematurely on 7 December 1870. Laura was “mentally deficient,” according to Leslie Stephen, and may have suffered from a form of autism. She lived at home with a German nurse, Louise Meineke, when Virginia Woolf was a child. In 1888, Laura was settled with Dr. Corner at Brook House, Southgate, and she died at the Priory Hospital, Southgate, in 1945.

In March 1873 Thackeray and the Stephens moved to 8 Southwell Gardens. The couple travelled extensively, and by 1875 Minny was pregnant again, but this time was in poor health. On November 27 she developed convulsions, and died the following day of eclampsia.

After Minny’s death, Leslie Stephen continued to live with Anny until 1877, but they moved to 11 Hyde Park gate South in 1876, next door to her widowed friend and collaborator, Julia Duckworth. Leslie Stephen and his daughter were also cared for by his sister, the writer Caroline Emelia Stephen, although Leslie described her as “Silly Milly” and her books as “little works”. Meanwhile Anny was falling in love with her younger cousin Richmond Ritchie, to Leslie Stephen’s consternation. Ritchie became a constant visitor and they became engaged in may 1877, and were married on August 2. At the same time Leslie Stephen was seeing more and more of Julia Prinsep Duckworth (née Jackson, 1846–1895). Leslie Stephen and Julia Duckworth were married on March 26, 1878. They had four children, among which Virginia Woolf and Vanessa Bell.