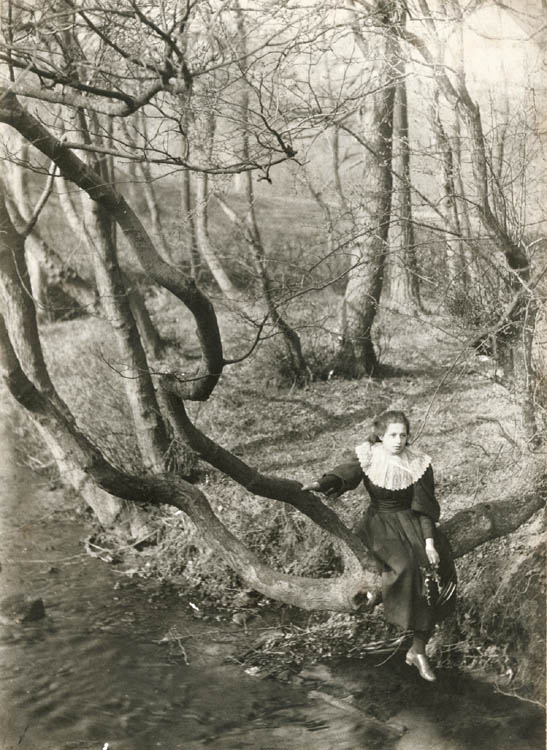 Girl in Tree by Stream (Epping Forest, England) by Circle of Frederick Evans, 1892-94

The print comes from the same source as a number of albums that were collected by Alfred Harrison (possibly Evans’ brother- or father-in-law), and contain photos by Evans, Harrison, John Dent (attributed), Eustace W. Porter and Hector Maclean (attributed). The latter two, photographers in the salons at the turn of the century; the former, the publisher of Aubrey Beardsley‘s prints, who was introduced by Evans to Beardsley in Evans’ bookstore, a favorite haunt of both parties. Identified Evans’ photos were of his wife and her sister. The albums are particularly important because they represent one of the few amateur collaborations in the history of photography (the one other the Dillwyn-Llewelyn clan) and shed light on Evans’ earliest work and possible influences. It is possible that many more photos, including this one, were actually by Evans than were credited by Harrison, who apparently would often claim the credit for other’s work. On some prints, Harrison’s initials have been erased and another photographer’s initials were put in. Considering the low number of prints attributed by Harrison to Evans and the high caliber of some of the photos attributed to Harrison of Epping and other forests where Evans was known to photograph, it is highly likely that many were actually by Evans, who might have been reluctant to challenge an in-law’s faulty credit line. Provenance: the Harrison family.