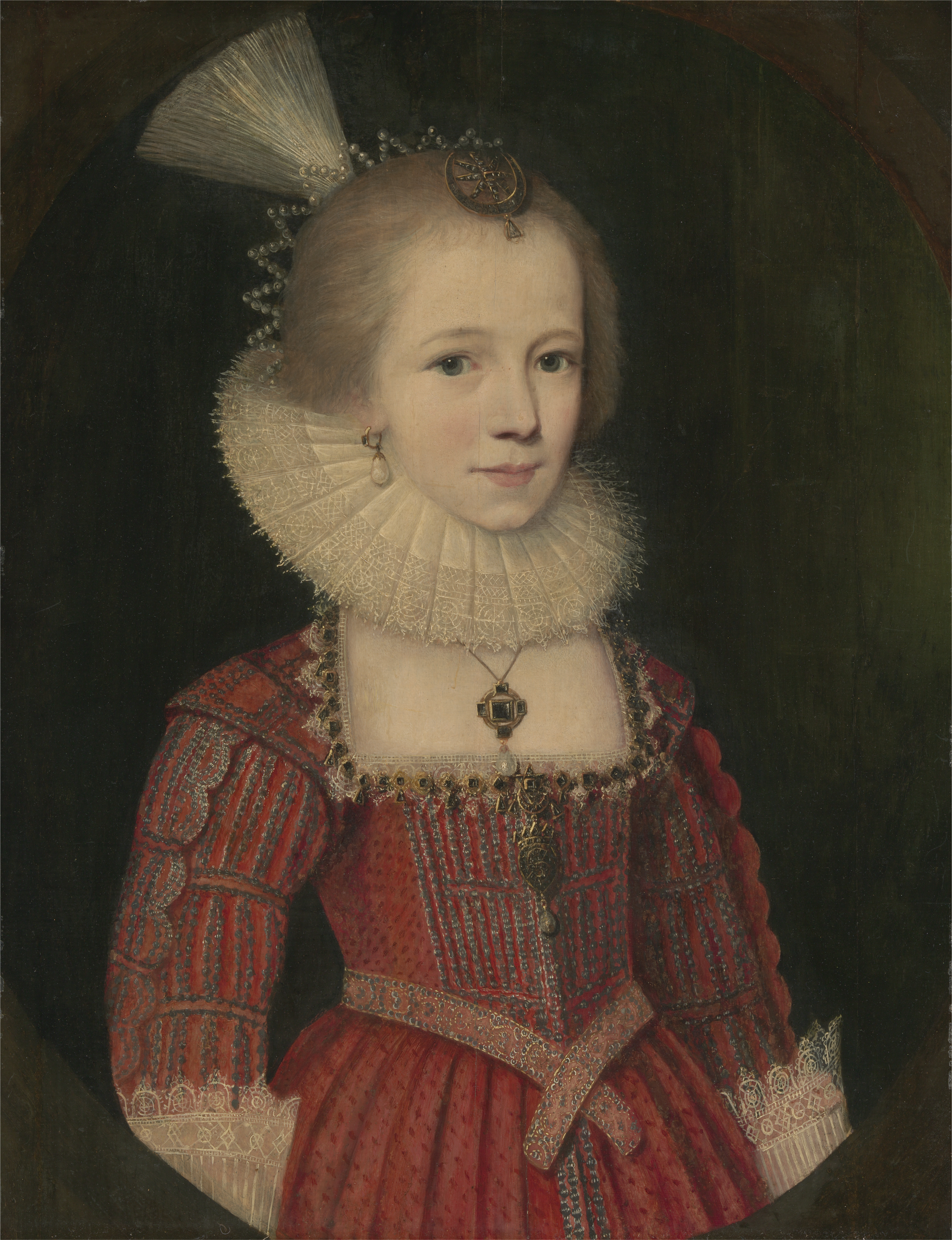 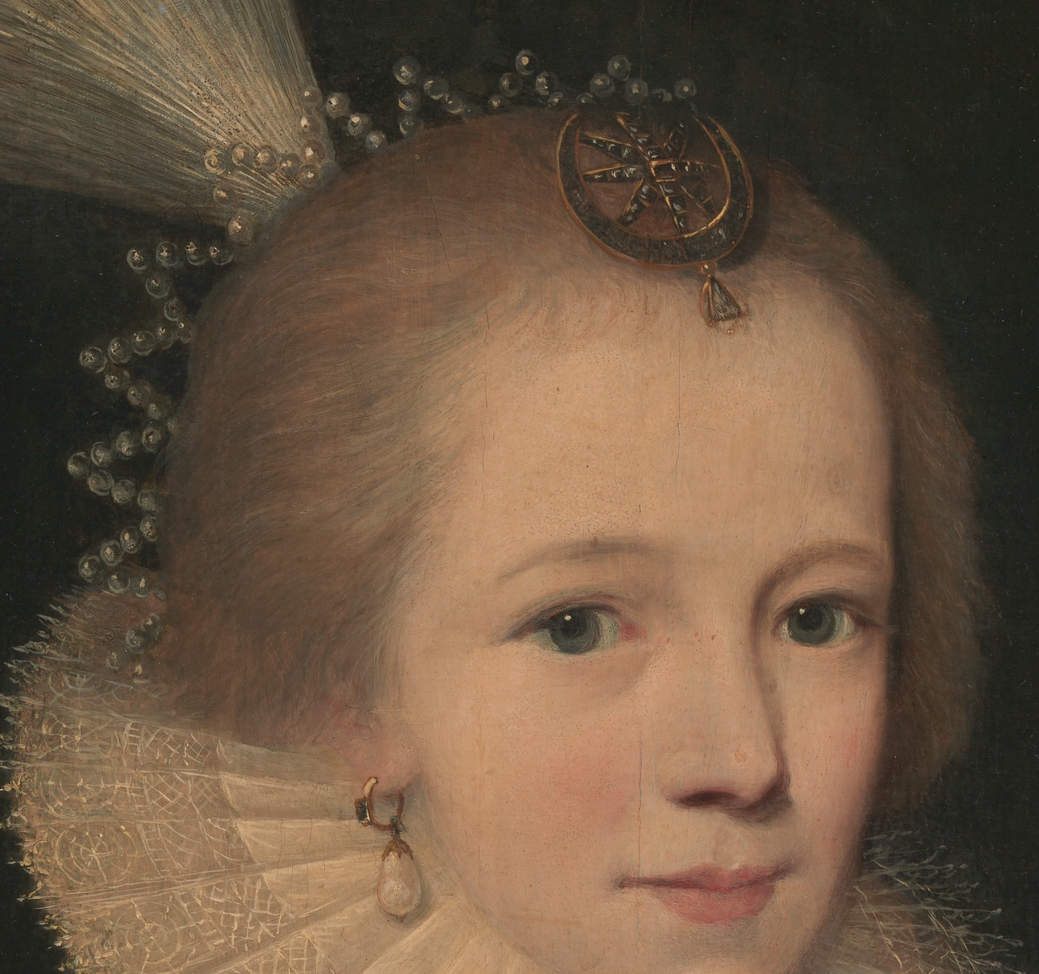 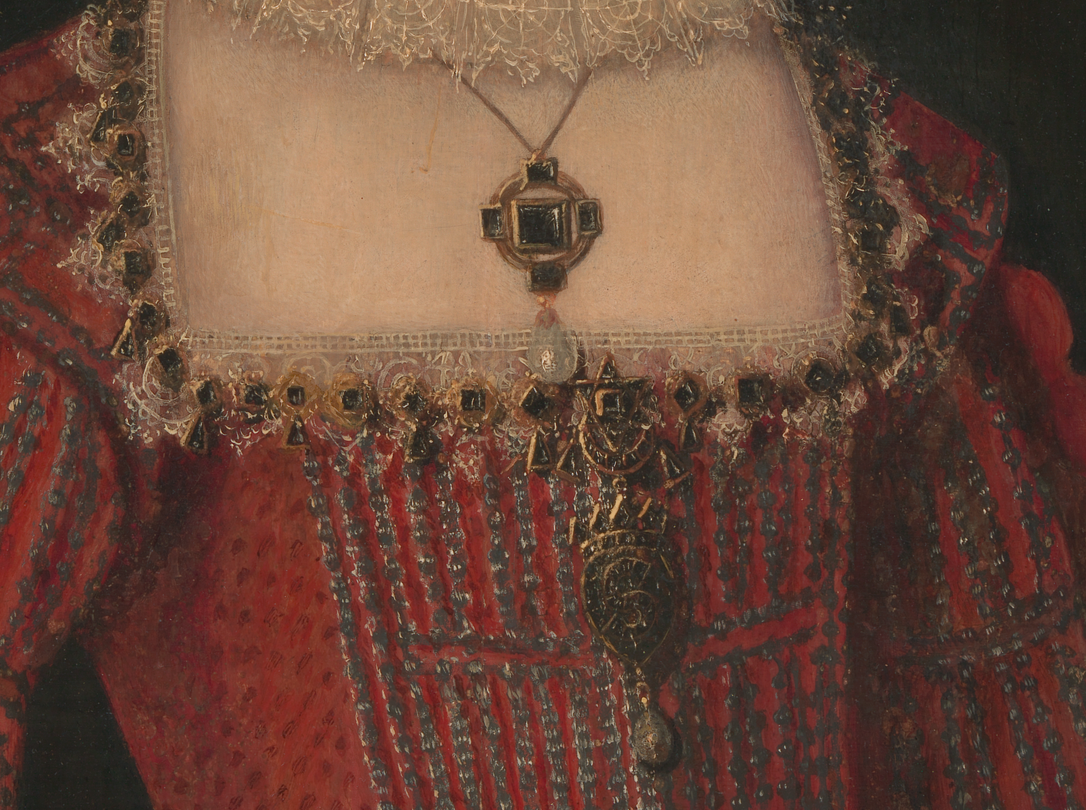 The girl in this portrait wears remarkable jewelry. At the back of her head a crown of pearls, and above her forehead a jewel in the shape of a crescent moon with inside it an 8-pointed star or octagram. The crescent moon was most probably a symbol of Diana, the Roman Goddess of the moon and  hunting. The crescent moon, sometimes worn as a diadem, is a major attribute of the goddess. Diana was the Roman goddess of the moon and hunting. An interesting article about Diana symbology in the arts can be found on this link here. The pearls might also refer back to the Goddess Diana. On this link here there is a description of Moon and Pearl symbology in Tudor paintings of Queen Elizabeth:

” Moons and pearls (because of their resemblance to the moon) were used to present Elizabeth as the goddess of the Moon, Cynthia (also known as Diana), who was a virgin and therefore pure. Sir Walter Ralegh helped to promote the cult of Elizabeth as a Moon goddess with a long poem he wrote during the late 1580s, ‘The Ocean’s Love to Cynthia’, in which he compared Elizabeth to the Moon.”

The star, next to the crescent moon, is also related to the Diana symbology, see wikipedia on the link here and fragment below:

“By the late Hellenistic or early Roman period, the star and crescent motif had been associated to some degree with Byzantium. If any goddess had a connection with the walls in Constantinople, it was Hecate. Hecate had a cult in Byzantium from the time of its founding. Like Byzas in one legend, she had her origins in Thrace. For example, some Byzantine coins of the 1st century BC and later show the head of Artemis (=Diana) with bow and quiver, and feature a crescent with what appears to be a six-rayed star on the reverse.

The six-pointed star is the Creator’s Star or Star of Creation. Its six points stand for the six days of creation, and are also represent the six attributes of God: power, wisdom, majesty, love, mercy and justice. This star is the same as the Star of David, a symbol of Judaism modern-day Israel. The six-pointed star is of ancient origin and is used in many other religions with a variety of meanings.

Then there is the initial of the letter “S”. I wonder if this letter refers to the surname of the family the girl belongs to. Like the letter “B” of Anne Boleyn’s famous pearl necklace. Or does the letter “S” refer to some kind of order to which she belonged? I would be very curious to find out more about it. As I wrote in my ‘About’ page, I am by far no historian. But I love to learn more about the past and understand it’s symbols. And this portrait has certainly sparked my curiosity.

Via: Yale Center for British Art