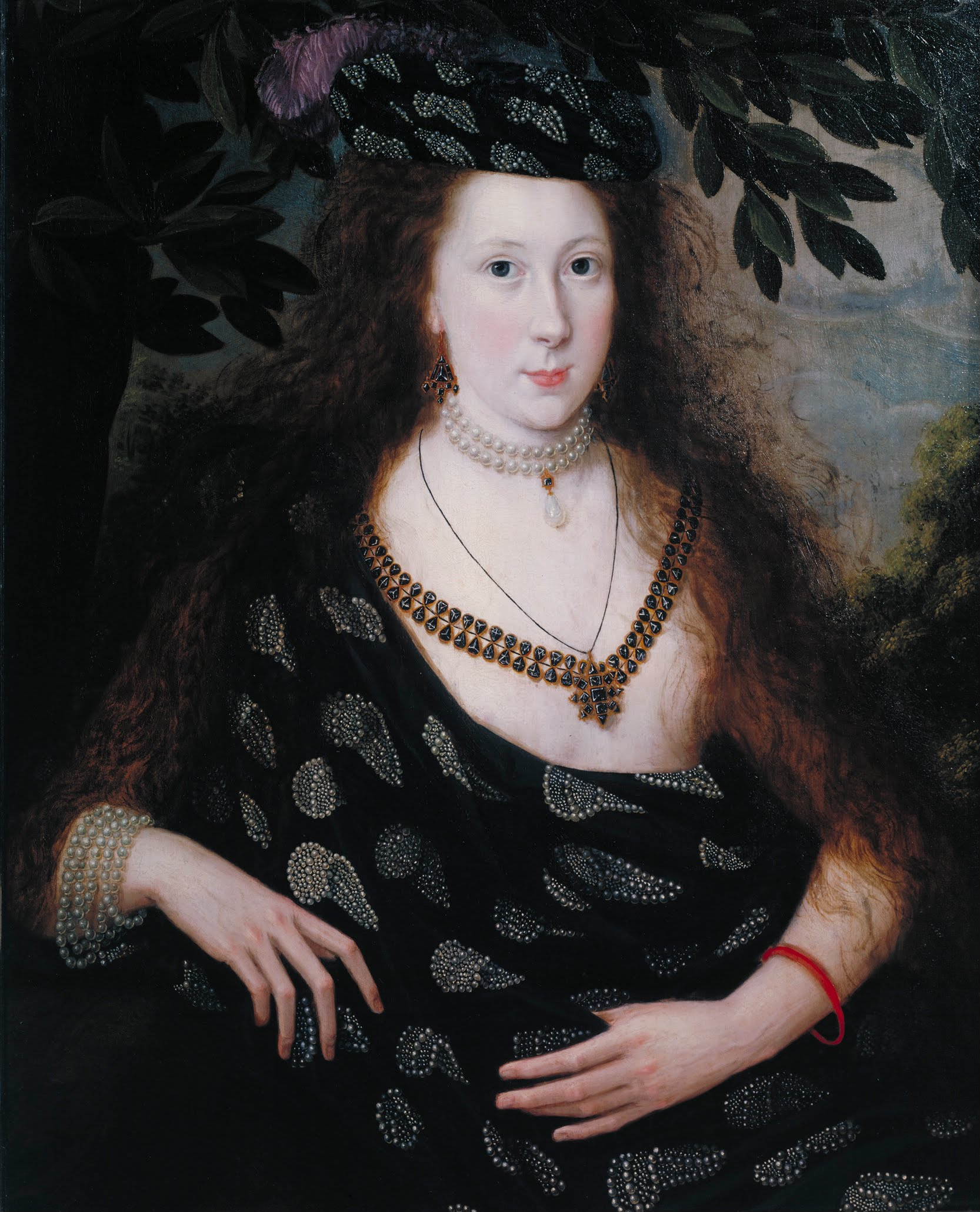 This painting came from the same family collection at Wroxton Abbey, Oxfordshire, as the portrait of the sitter’s unmarried sister-in-law Anne Pope, dated 1615 (Tate T00068). This collection was dispersed in 1933. Both works are by the same hand, which has been identified as that of Robert Peake, by comparison with such documented works as the 1613 full-length image of the future Charles I as Duke of York (University of Cambridge, Old Schools).

Elizabeth Watson, an heiress, married Sir William Pope of Wroxton (1596-1624) on 13 December 1615, and it is thought that her portrait may have been painted in connection with this event. She is depicted beneath a laurel tree, with a landscape beyond, and wears a classical mantle of black fabric embroidered with pearls in an ostrich-feather pattern; this pattern is repeated on her hat, which is trimmed with a real purple feather. She has a pearl choker, strings of pearls round her right wrist and a coral bangle round her left. Her chest is bared, with a heavy diamond necklace laid across it, and her left breast is almost exposed. Her long hair hangs down, loose except for a single braid above her arm. This was a contemporary symbol of virginity and brides sometimes wore their hair down thus – one high-profile example being Princess Elizabeth (1596-1662) the future ‘Winter Queen’, at her marriage on St Valentine’s Day (14 February) in London in 1613 (see Robert Rait, Five Stuart Princesses, London 1902, p.75).

Near-exposure of the breasts seems to have been fashionable at the Jacobean court, although it was presumably restricted to within the confines of an elite coterie. The sitter’s attire has affinities with some of Inigo Jones’s (1573-1652) costume designs for masques – elaborate and costly court entertainments which combined spoken text, music, and dance, performed in fantastical costumes within elaborate painted sets. These were rich in classical imagery and the sitter’s mantle is probably intended to be seen as classical in inspiration.

It has been suggested that the ostrich-feather imagery indicates that Lady Elizabeth is here presented as the personification of the continent of America (Chirelstein, pp.41-3). Her wealthy father, Sir Thomas Watson, had invested in the settlement of Virginia. Feathers do, however, occur in many and varied contexts in Jacobean art, often with no evident connection with America. Elizabeth bore Sir William three sons and after his death in 1624 married Sir Thomas Peneystone of Leigh in Sussex. The dates of her own birth and death are not recorded.

Robert Peake came from a Lincolnshire family and, like other British painters of the period, initially trained as a goldsmith. He was apprenticed in London in 1565 and first worked as a decorative painter for the court of Elizabeth I in 1576. Following the accession of James I in 1603, Peake was appointed Serjeant Painter to the monarch in 1607. Peake became the official painter to Henry, Prince of Wales, James I’s art-interested heir who died in his teens in 1612. In 1611, Peake commissioned a translation of Sebastiano Serlio‘s The Firste Booke of Architecture, which he dedicated to the Prince.