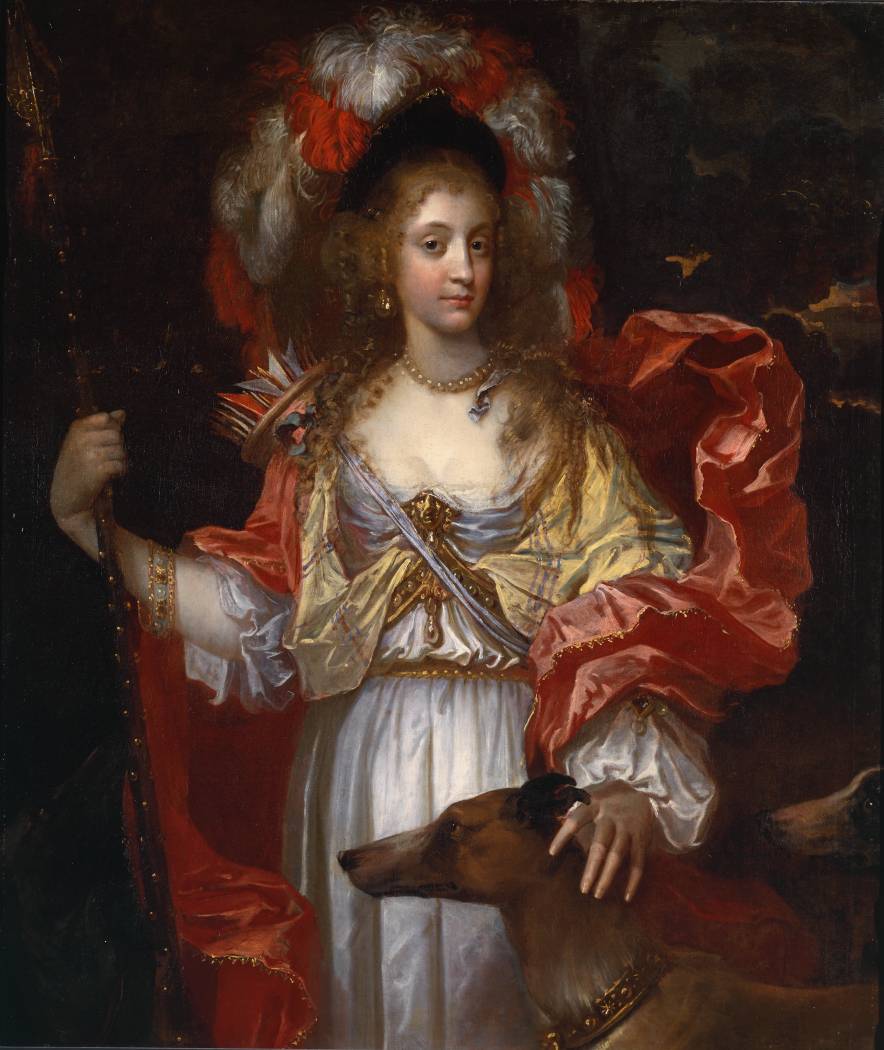 Huysmans, an artist from Antwerp first recorded in England in 1662, is particularly associated with the court of the Roman Catholic Catherine of Braganza (1638-1705), queen to Charles II. Huysmans was most likely a Roman Catholic too and is said to have styled himself ‘her Majesty’s Painter’ (Vertue Notebooks II, Walpole Society, 1931-2, 20, p.124). He produced several works for Catherine, including religious images as well as portraits. Most spectacularly he painted her as a holy shepherdess, seated on a riverbank surrounded by ducks, lambs and putti (Royal Collection), typical of the exuberant Continental baroque style he practised. The portrait was admired by the famous diarist Samuel Pepys (1633-1703) who saw it on a visit to Huysmans’ studio in 1664, along with portraits of her maids of honour.

The unknown sitter in this portrait was formerly identified as Margaret Blagge, later Lady Godolphin (1652-1678), because of a label (no longer extant) pasted to the back of the picture inscribed ‘Calisto’. Calisto was a play, or masque, by the dramatist John Crowne (?1640-1712), performed at court in 1675 in which Blagge, at the time one of Catherine of Braganza’s maids of honour, played the part of Diana, virgin goddess of the hunt. Other court ladies played the parts of Diana’s attendant nymphs, each equipped with ‘plain quivers and arrows’ (see Eleanore Boswell, The Restoration Court Stage 1660-1702, London 1932, p.214). Calisto was magnificently staged and Margaret Blagge’s costume alone is said to have cost £300, excluding the expensive jewels. However, the yards of gold brocade and gold and silver lace with which it was made are not shown here, and the sitter’s hair appears to be dressed in an earlier style. Blagge was also a deeply pious woman, opposed to the superficiality of court life, and was a reluctant participant in Calisto, apparently retiring to a quiet corner to read a devotional book between appearances on stage. It seems unlikely that she would have sat for her portrait to commemorate the event.

Huysmans frequently painted ladies in the guise of Diana, a presentation that was seen to compliment the beauty, purity and chaste virtue of the sitter. Two other portraits by him, Anne Scott, Duchess of Monmouth and Buccleuch (private collection, Scotland) and Elizabeth Cornwallis (National Trust, Canons Ashby), show sitters in exactly the same pose as here, holding hunting spears with quivers of arrows at their shoulders, and with the same sharply delineated drapery characteristic of Huysmans. The portrait type was evidently repeated by Huysmans for various sitters and, although possibly influenced by stage costume, had no connection to a specific production. The hounds, one in the shadows on the left, one prominently in the foreground, the nose of another jutting into the picture on the right, suggestive of Diana’s hunting pack, are also studio patterns and appear in all three portraits.