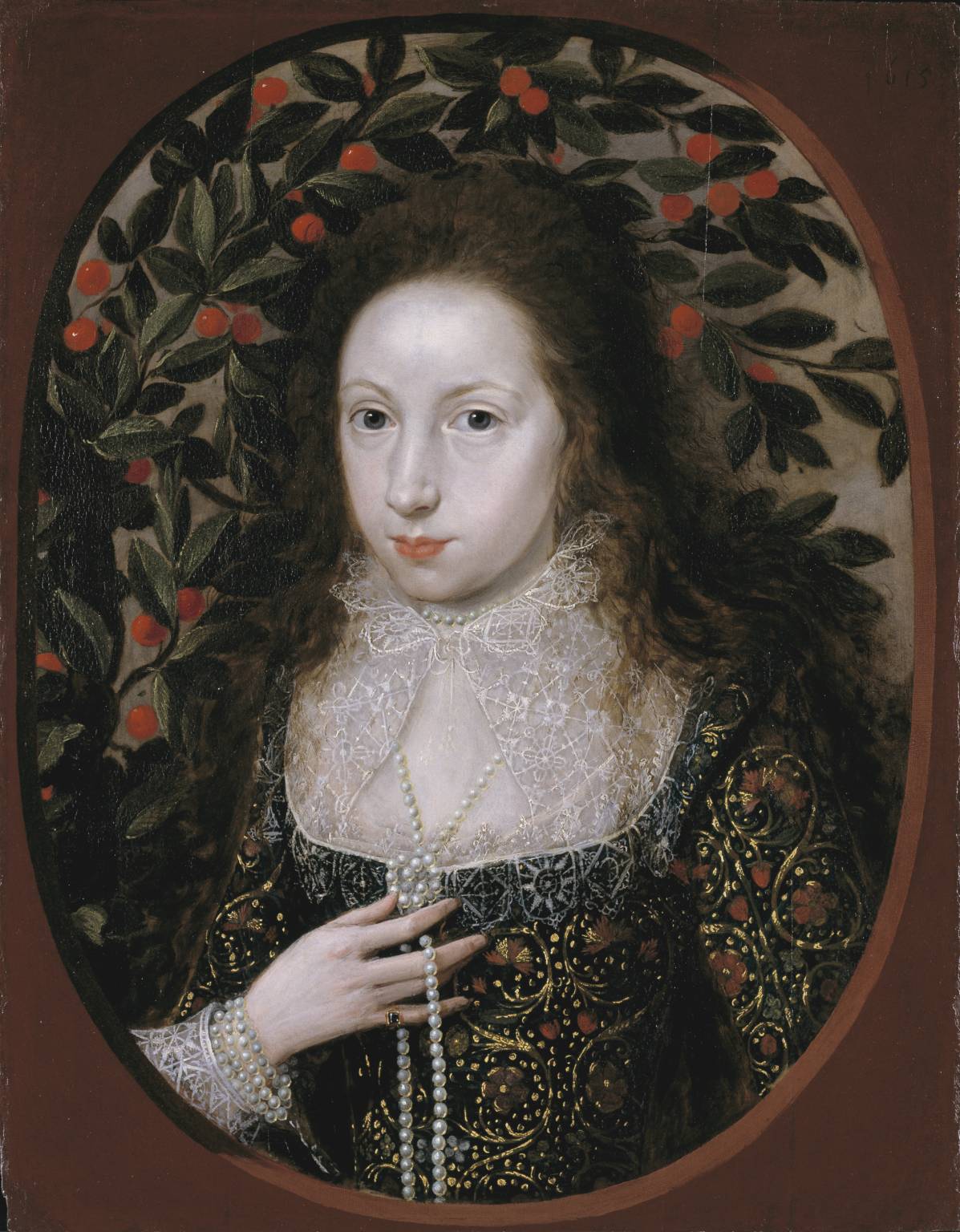 The sitter is identified by an inscription on the back of the painting, and the work is dated 1615, in the top right corner of the painted oval. Lady Anne Pope, who died unmarried on 13 July 1629, was the daughter of Sir William Pope, 1st Earl of Downe (1573-1631) and his wife Anne Hopton, who were married in 1595. She is thought to have been born in c.1599.

Lady Anne is richly attired, in a jacket embroidered with carnations, roses and strawberries. These can all be interpreted as symbols of love. She wears expensive lace at her neck and wrist, and strings of pearls that are symbolic of purity, but also signify her high status. Her long hair is unbound – a sign of virginity – and she is framed by the branch of a cherry-tree in fruit. Cherries were considered to be the fruit of Paradise and thus a reward of virtue. With her fashionably pale complexion, Lady Anne gazes out at the viewer with modest directness, one hand against her breast, which emphasises her large and costly pearls. The whole work adds up to a presentation of this young woman as a potential bride.

The painting was in the same family collection, latterly at Wroxton Abbey until sold in 1933, as the portrait of the sitter’s sister-in-law Elizabeth Pope. Both are by the same hand, which has been identified as that of Robert Peake, by comparison with such documented works as his 1613 full-length image of the future Charles I as Duke of York (University of Cambridge).

Peake came from a Lincolnshire family and, like other British artists of the period, initially trained as a goldsmith. He was apprenticed in London in 1565 and first worked as a decorative painter for the court of Elizabeth I in 1576. Following the accession of James I, Peake was appointed Serjeant Painter to the monarch in 1607. He shared this office with another artist who also made royal portraits, John de Critz (c.1552-1642) The two men were neighbours in the London parish of St Sepulchre and it is possible that they also shared a studio. Peake became the official painter to Henry, Prince of Wales, James I’s art-interested heir who died in his teens in 1612. In 1611, Peake commissioned a translation of Sebastiano Serlio‘s The Firste Booke of Architecture, which he dedicated to the Prince.