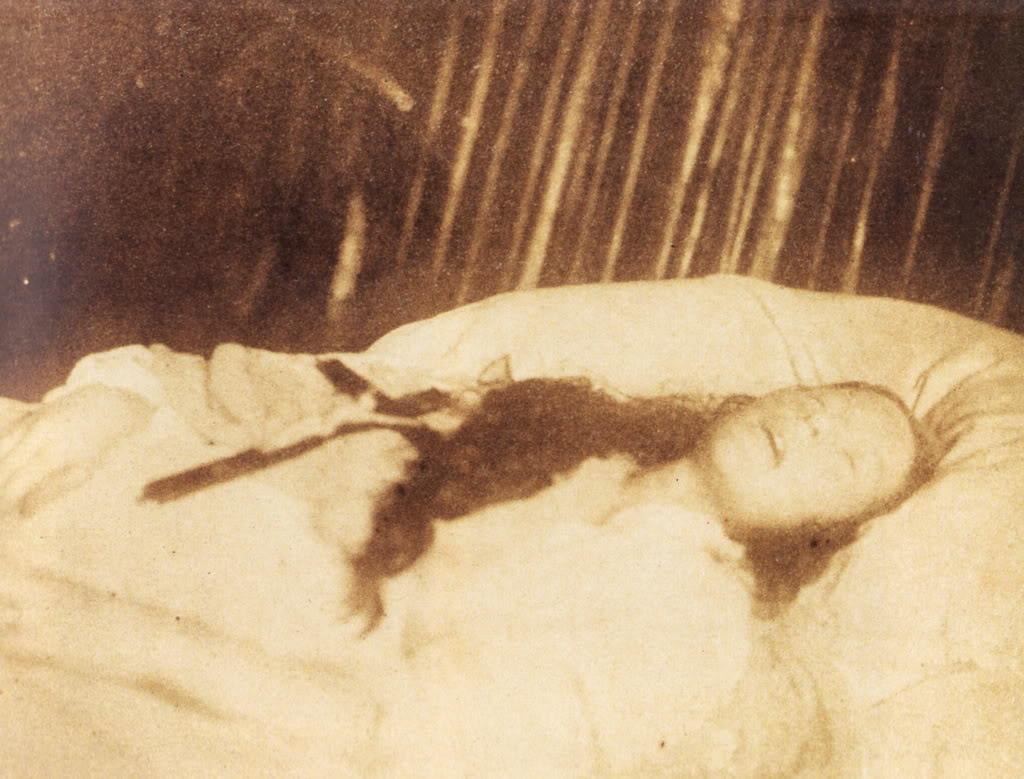 Post mortem of Victoria, Duchess of Nemours on her deathbed in Claremont Castle, Surrey (GB), 1857

When the Duchess died suddenly on 10 November 1857, only ten days after she had given birth to her fourth child, Blanche, both the Queen [Victoria] and her husband [Prince Albert] were ‘deeply afflicted’ and ‘completely upset’, and rushed to visit the family on the following day. The Queen provided a highly melodramatic account of the death to Lord Clarendon:

“We visited the house of mourning yesterday and no words can describe the scene of woe… There was the broken-hearted, almost distracted widower… and lastly, there was in one room the lifeless, but oh! even in its ghostliness, most beautiful form of his young, lovely, and angelic wife, lying in her bed with her splendid hair covering her shoulders, and a heavenly expression of peace; and in the next room, the dear little pink infant sleeping in its cradle… The dear Duchess’s death must have been caused by some affection of the heart, for she was perfectly well, having her hair combed, suddenly exclaimed to the Nurse, “Oh! mon Dieu, Madame” – her head fell on one side – and before the Duke could run upstairs her hand was cold!”.

Prince Albert wrote equally emotionally to his brother on November 11 and described her as looking “like an angel of beauty, her glorious hair falling over her bosom”. To commemorate her cousin the Queen also compiled an album which included a watercolour of the ‘Duchesse de Nemours on her deathbed, after death, 10 November 1857’. This shows her in a similar pose to that adopted by the sculptor Chapu for the tomb effigy. 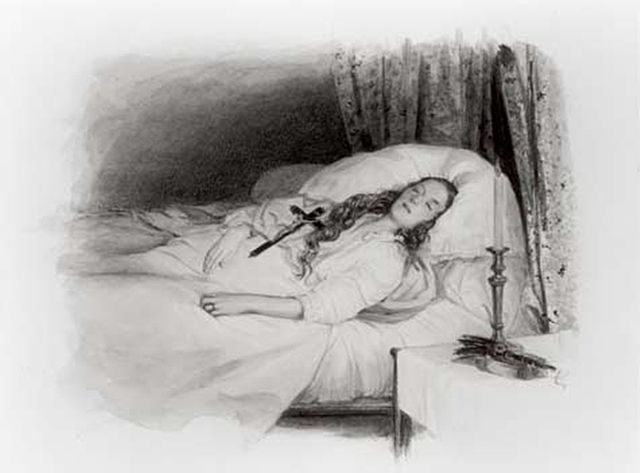 Chapu would never have seen the Duchess alive as his effigy was carved some 24 years after her sudden death, nor is he known to have visited England. His serene evocation of the youthful but dead princess must have derived from portraits of her. There is some evidence that he was sent a plaster cast of a portrait bust of the Duchess. On 12 June 1880 Princess Beatrice wrote, on behalf of her mother the Queen, to the Duke of Nemours, that: “the cast of the bust of dear Aunt Victoire that you would like to have is ready and Mother will send it to you. She is very happy for you to have it. I will put you in contact with a sculptor for the monument at Weybridge.”

NB: I’m not sure what the Duchess’ real date of death was. On Wikipedia it says she died 10th of December 1857, on the website of the Liverpool Museums (from which the above quote is taken) it says she died 10th of November 1857. On Wikipedia it said she died two months after giving birth, on the Liverpool Museums website it is said she died only ten days after giving birth. Which dates are correct?