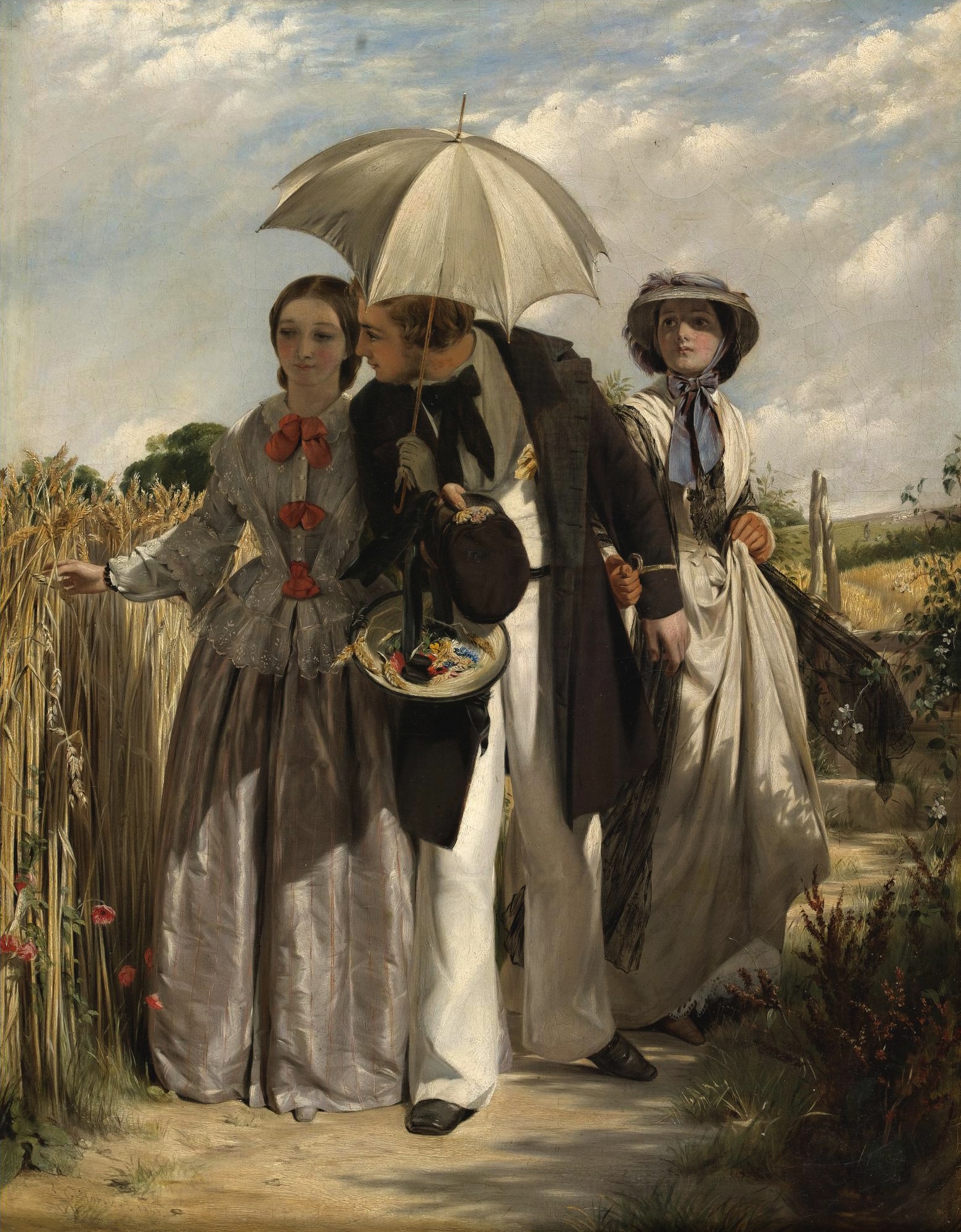 ‘Young naval officers are notoriously susceptible but I am sorry that this one should have two such unsuitable girl-friends, one obvious soppy and the other, who is having trouble with a bramble, equally obviously bad tempered. But naval officers are experts at shedding their girl-friends (they have to be!), there is safety in numbers and I have little doubt that this young man (far too young to marry) will succeed in disentangling himself – and after all it is autumn not spring. The only comment of a farming friend of mine whom I showed this picture was “Wheat was very long in the straw that year”‘. Sir David Scott

Showing a Preference is beautifully painted, but at the same time – as so often with Victorian genre painting – is in certain respects an unsettling subject. A young naval officer is seen walking in the countryside with two young women, each of whom has rested her hand upon his sleeve. On his right side, is a girl who wears a grey and pink silk dress and embroidered jacket, which is closed at the front with three carmine red bows. Her hair is demurely parted at the centre, and her expression is one of contented self-possession. She holds out her right hand to catch and break off ears of wheat which she collects in the crown of her upturned bonnet, which hangs by its ribbon from the young man’s arm. That the young officer is attracted to the girl in pink and grey is made clear by the way he thrusts himself forward, at the same time twisting his head around to look into her face.

On the right side of the composition is the other young woman, who though neglected by the man, seeks to retain her hold on his slack arm, but is left to walk alone as he heedlessly turns away from her. She too is elegantly dressed, but without the gaiety of her female companion; a black lace or embroidered shawl suggests loss, perhaps that of a husband or erstwhile lover. She wears a wide-brimmed hat, so that her hair is largely concealed, and a mauve ribbon tied in a bow, so that no glimpse is offered of her neck. Whereas the girl on the left side glides along serenely, and seems to enjoy the experience of walking in the countryside, the girl on the right finds her path obstructed and her shawl torn by brambles.

As might be expected of a genre painting of this type, which serves as a metaphor of the shallowness of male romantic feelings, Showing a Preference incorporates an elaborate system of symbolical motifs which are calculated to support the intended allegory. The left and right sides of the composition represent environments that are respectively bountiful and welcoming, and threatening and inhospitable. The girl who is favoured stands against a harvest field which is a symbol of forthcoming fruitfulness; while the girl who is not admired is seen to have passed a field of corn (glimpsed at the right edge of the composition) which has already been harvested, perhaps an allusion to her having already been married or in love, but subsequently finding herself alone. Likewise, Horsley has manipulated the fall of light over the composition to give symbolical emphasis to the subject: the girl on the left is protected from the fierce light of the sun by the parasol that she holds and which forms a crown over her head and that of her suitor and in the shadow of which their faces may be seen to conjoin. The quality of shaded light appears to bring colour to her cheeks, making her look young and healthy. The poppies at her feet, and the red bows on her bodice, serve to echo the brightness of colour in her lips and cheeks. Her neglected companion, however, is unguarded from the light, and her face seems pallid and tense as the sun casts under the brim of her hat. The shadows that fall on the two girls’ skirts are each of a different kind: the one who is favoured has a zig-zag pattern cast by the flapping wings of the man’s frock-coat; while the other’s skirt shows a sinister edge of invading vegetation. The allegory was clearly understood by contemporary commentators. Punch issued a commentary on the subject in response to the work shown at the 1860 Royal Academy: ‘Mr Horsley’s naval lieutenant (H.M.S. Trifler) is “showing a preference” in a very indiscreet and decided manner. The very poppies hang their heads in shame’.

Horsley, an artist who was regarded by some as out of touch with progressive artistic developments (not least by his notorious aversion to the painting of nude subjects and his disapproval of study from the undraped model, leading to his mocking sobriquet ‘Clothes Horsley’), shows himself here to be a master of plein-air naturalism, and one who had surely studied figurative subjects in out-door settings so as to capture a particular quality of light that would make such subjects convincing. In purely pictorial terms Showing a Preference is vivid and virile, rich in colour and texture, and of great compositional power.

Lindsay Errington, in her 1991 catalogue entry for the painting when it was exhibited at the National Gallery of Scotland, suggested that Horsley may have had in mind treatments of the subject The Choice of Hercules when devising the present composition. According to that familiar pictorial convention, two paths are offered, one of which must be chosen, and which represent alternatives of virtuousness or sinful indulgence. Annibale Carracci‘s Hercules at the Crossroads, of 1596, in the Farnese Collection in Naples (Museo di Capodimonte), stands as a representative iconographic example, and exemplifies the contrasting styles of dress and degrees of allure, one distracting by her capacity for beguilement, the other requiring the god to be upstanding and manly, that goes with the subject. The comparison breaks down, however, when the young naval officer in Horsley’s painting is equated with Hercules; in representations of the mythological subject Hercules is shown to equivocate between the two, whereas Horsley’s hero makes no resistance to the temptation that the prettier of the two girls makes to him. Comparison may also be made with Titian’s Sacred and Profane Love, of 1514, which Horsley – who was known to be interested in the works of the Old Masters, and who was later deputed to select the Royal Academy winter exhibitions of historic paintings – may perhaps have seen in the Borghese collection in Rome. In Titian’s work, a contrast is offered between two female types who exercise their attraction in different ways, with the figure of Cupid at the centre and who seems indifferent to both. Horsley had previously explored the theme of contrasting female types and an individual’s preference for one or the other in his painting L’Allegro e Il Penseroso (Royal Collection, Osborne), of 1850, representing the two girls’ personalities respectively as light-hearted and frivolous, and serious and doleful.

One of the most famous and remarkable of all Victorian genre paintings, this is one of two autograph versions of John Callcott Horsley’s masterpiece Showing a Preference. The version shown at the Royal Academy in 1860 was probably that offered for sale by Christie’s on 22 November 2006, lot 219 and bought by Agnew’s (Fig 1), which bears a label which may be related to its submission to the Academy selection committee that year. Which of the versions came first is impossible to say; the present composition is somewhat smaller (that sold at Christie’s was 91.5 by 71.1 cm); both are dated 1860, and the two were therefore likely to have been worked on in tandem. The quality of handling of the two versions supports the view that each of the two paintings has the status of a prime version. The history of the Christie’s version of the subject is unknown, although it belonged to a Mr Wedderburn in 1962; the painting from the Scott collection was part of the distinguished group of paintings and drawings formed by George Schlotel and which was described in an article in Art Journal in 1869 (pp. 341-43).