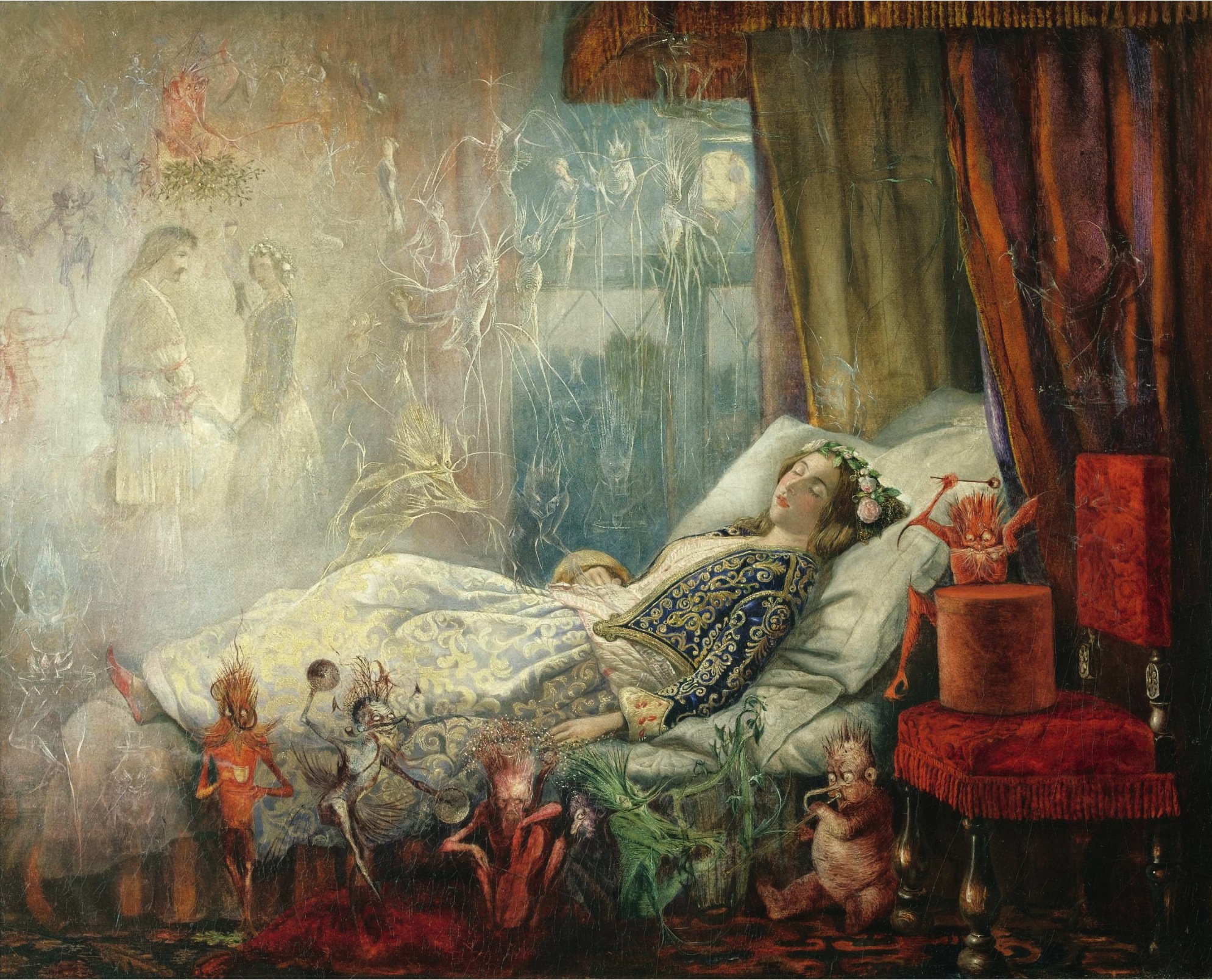 The Dream after the Masked Ball by John Anster Fitzgerald
.
” Our revels now are ended. These our actors,
As I foretold you, were all spirits and
Are melted into air, into thin air:
And, like the baseless fabric of this vision,
The cloud-capp’d towers, the gorgeous palaces,
The solemn temples, the great globe itself,
Yea, all which it inherit, shall dissolve
And, like this insubstantial pageant faded,
Leave not a rack behind. We are such stuff
As dreams are made on, and our little life
Is rounded with a sleep. “

The lines of poetry are those spoken by Prospero before the marriage of Miranda and Ferdinand at the conclusion The Tempest. This picture was first exhibited at the National Institution in 1858 and the critic for the Art Journal explained the strange circumstances of the subject: ‘The dreamer is a young lady, who has cast herself on her couch, while yet dressed. Her dream conjures up gnomes, elves, sprites, and representatives of all the populations of “faerie;” but the chief incident of the vision has reference to a dame and a cavalier, who represent herself and him on whom her thoughts most dwell. The vein of ideality pervading the work is equalled only by its colour and neat execution’ (Art Journal, 1858, p. 111).
.
The sleeping girl therefore imagines herself to be Miranda, dressed for her own wedding and with a crown of roses in her hair. This was perhaps the role in which she had that evening attended a masked ball, and the clothes that she still wears, having collapsed in exhaustion before she had undressed, are possibly intended as a costume that suggests the Shakespearean heroine. All around her bed, and in the air above her sleeping body, swarm myriad fairy creatures and hobgoblins as existed on the magic island, while above her appears a vision of herself and Ferdinand holding hands before the unseen figure of Prospero. In a more immediate sense, the subject of the painting is the dream of a young woman who has fallen in love and in which she sees herself standing hand in hand with that person at the moment before their first kiss (made permissible by the bunch of mistletoe beneath which they stand). The painting remains full of very personal and fevered adolescent excitement.
.
In his discussion of Fitzgerald’s fairy paintings in the 1997 Royal Academy catalogue, Jeremy Maas places the various versions of the present subject, which he refers to generically as the artist’s ‘dream’ paintings, in the context of opium consumption and addiction. Opium, usually in the form of laudanum and therefore taken as a sweetened drink, was frequently prescribed as a painkiller and general-purpose sedative in the mid-nineteenth century. References to the use of laudanum in the present painting may include the goblin figure in the foreground carrying a steaming beaker. Furthermore, the astonishing and vibrant colours of the painting, particularly the violent blood reds of the chair and curtains, seem to be an attempt to simulate the hallucinatory appearance of such objects to the person who has taken the drug. The weirdness of this and other paintings by Fitzgerald must derive from experimentation with such drugs, whether as a remedy for health problems or taken for recreational purposes.
.
‘Fairy Fitzgerald’, as the artist was known in reference to his favourite types of subject, was the son of an Irish actor, William Thomas Fitzgerald. His upbringing in a theatrical family may explain his fondness for Shakespearean quotation, and in a larger sense the character of his compositions which are often suggestive of the stage. A vivid account of Fitzgerald was given by Harry Furniss in his memoir My Bohemian Days (1919): ‘He was a picturesque old chap, imbued with the traditions of the transpontine drama [i.e. that of the Old Vic Theatre, then as now on Waterloo Road on the south side of Waterloo Bridge] He had a mobile face, a twinkling eye, and his hair was long, thick and thrown back from his face. He was known as “Fairy Fitzgerald” from the fact that his work, both colour and black-and-white, was devoted to fairy scenes, in fact his life was one long Midsummer Night’s Dream’ (Jeremy Maas, ‘Introduction’, Victorian Fairy Painting, exhibition catalogue, Royal Academy of Arts, London, 1997, p. 18). Fitzgerald’s knowledge of how limelight was being introduced to theatres in the mid-century to produce stronger stage lighting, and the way this might be manipulated to spectacular and garish effect, lies behind the types of composition that he favoured. In The Dream after the Masked Ball the explosion of supernatural brightness and vivid colours in the girl’s chamber, which lights her sleeping body, the curtains and furniture of the room, and all the weird creatures who are there – all of which contrasts with a cold beam of light cast by the moon – could never have been attempted by an artist who had not witnessed similar effects in pantomime and serious drama on the contemporary stage.
.
One of the two versions of the present subject, The Dream after the Masked Ball, was exhibited by Fitzgerald in 1858 at the National Institution. It may be confidently stated that the present painting is the exhibited work because it is the larger and more finished of the two compositions. The other version, which measures 25.4 by 30.4 cm, is in the collection of Andy and Susan Borowitz, and was included with the present painting in the Royal Academy exhibition Victorian Fairy Painting in 1997-98 (catalogue no. 38). Each of these two versions of the subject has customarily been entitled The Stuff that Dreams are Made of and it was under this title that the present picture was sold at Christie’s in 1954.