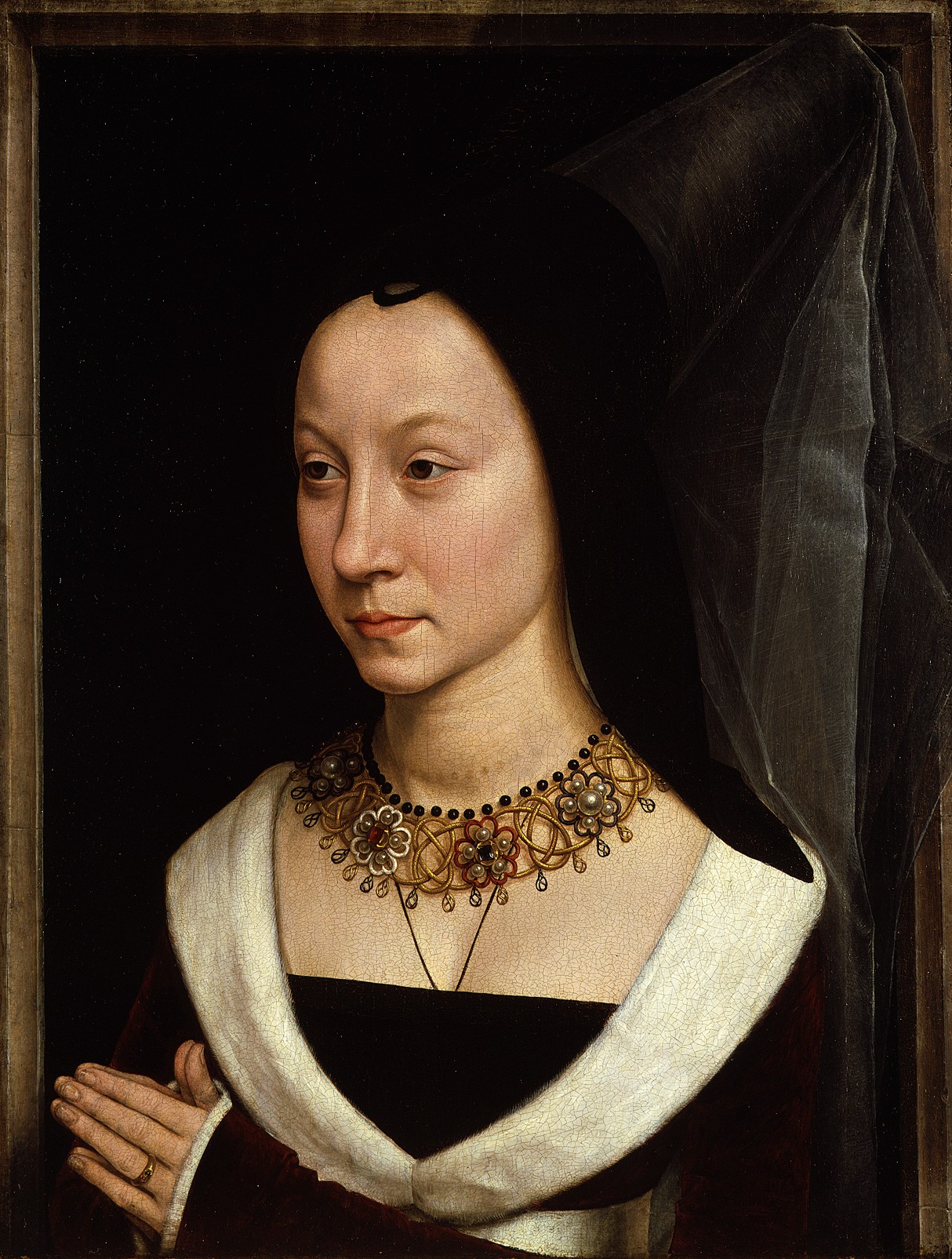 “The clever balance of verisimilitude and idealization in the features of this pair made Hans Memling the most sought-after portraitist of his day. The Florentine Tommaso Portinari was the branch manager of the Medici bank in Bruges, and probably commissioned these portraits from Memling upon the couple’s marriage in 1470. They originally formed a triptych with a central devotional image of the Virgin and Child. Beyond demonstrating the couple’s piety, Maria’s elaborate necklace and gown display their wealth and social status. Memling places the sitters before illusionistic frames, an innovation suggesting that the figures project into our space. (…) Maria Portinari was still alive in 1501, when she served as the executor of Tommaso’s will. We do not, however, know the date of her death.”

Tommaso Portinari (1428–1501), member of a prominent Florentine family, was the representative of the Medici bank in Bruges. During his tenure there, he made large and extremely risky unsecured loans to Duke Charles the Bold that were never repaid, eventually leading to the ruin of the bank. However, at the time that Hans Memling painted these portraits of Tommaso (then about thirty-eight) and his wife Maria (only fourteen), Tommaso was a favored councilor of the duke and at the peak of his reputation in Bruges. These portraits were most likely commissioned around the time of the couple’s wedding in 1470.

The two portraits were certainly the wings of a devotional triptych, the center panel of which was a now-lost Virgin and Child (Waldman 2001). But these representations are not solely indicative of the couple’s piety; they also express their social status and connections at court. The plain black backgrounds of the paintings presented a type that was popularized by Rogier van der Weyden and was favored by Burgundian court circles. Memling’s innovation was to place the sitters before a trompe-l’oeil frame, boldly suggesting their relationship with the viewer’s space. Tommaso and Maria are dressed in the height of fashion. Maria in particular wears an ostentatious necklace very similar to one worn by Margaret of York at her wedding to Charles the Bold in 1468, which Tommaso and Maria attended. X-radiographs of Maria’s portrait show that her hennin was originally adorned with a V pattern and the initials T and M in pearls for Tommaso and Maria, as she wears in Hugo van der Goes’s Portinari Altarpiece (right wing; Galleria degli Uffizi, Florence). Her hennin was also positioned at a steeper, more vertical angle and overlapped the upper edge of the fictive frame. This can be seen as a pentiment, visible to the naked eye.

The two portraits are in remarkably fine condition—among Memling’s best preserved—except for the general darkening of the costumes that appear to blend into the background; the pattern on Tommaso’s purple jerkin and the details of Maria’s hennin have become obscured. Even so, the likenesses are marvels of naturalistic observation and exquisite execution. The subtly blended flesh tones describe not only the smooth sheen of the flesh, but also the sculptural form of the physiognomy. Extraordinary attention is given to such details as the scar on Tommaso’s chin, the lines at the edges of his eyes, and the wrinkles of flesh at the knuckles of the hands. Memling’s clever balance of verisimilitude and idealization of his sitters made him the most sought-after portraitist of his day by both locals and foreigners, and his exported portraits exerted considerable influence abroad, especially in Italy.