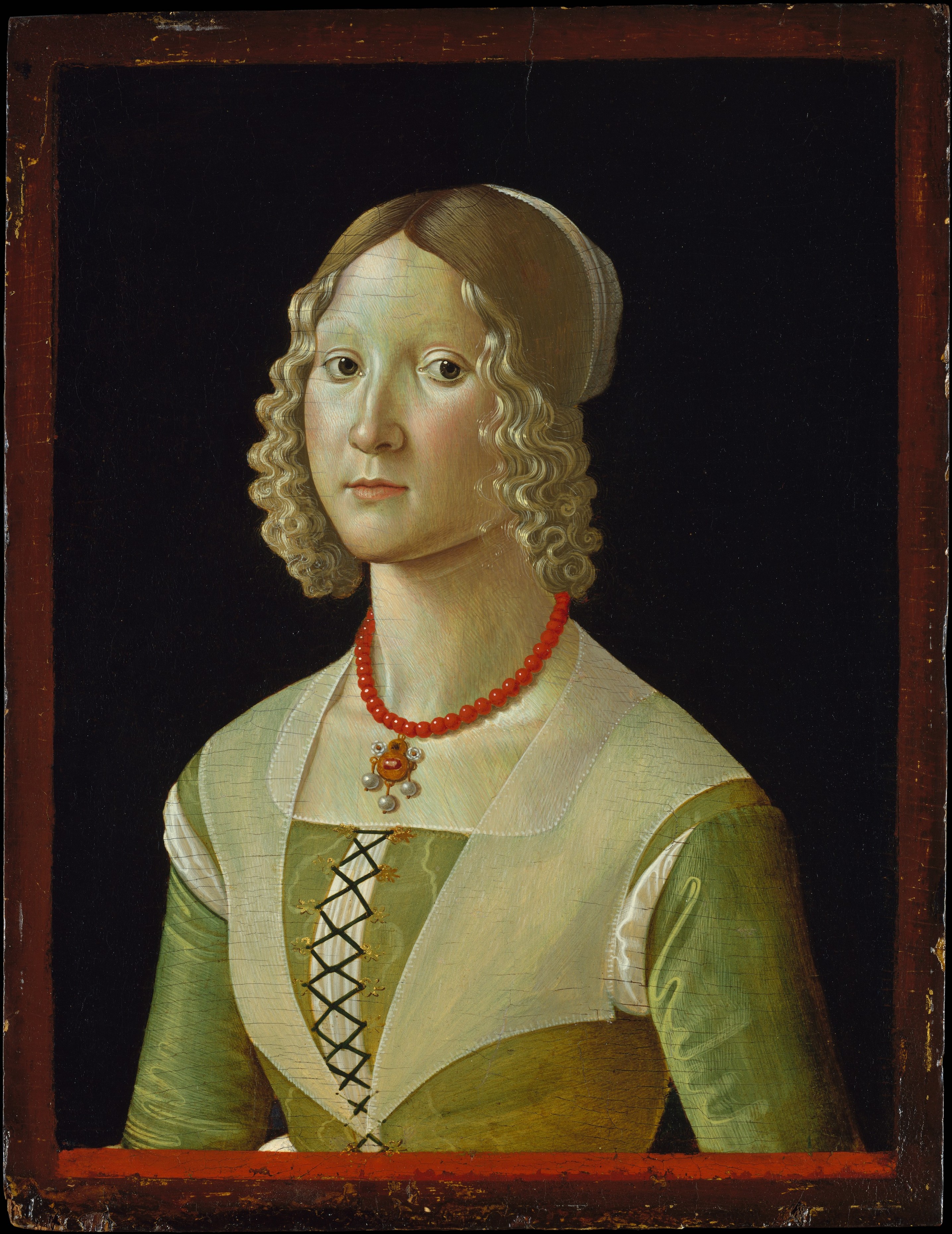 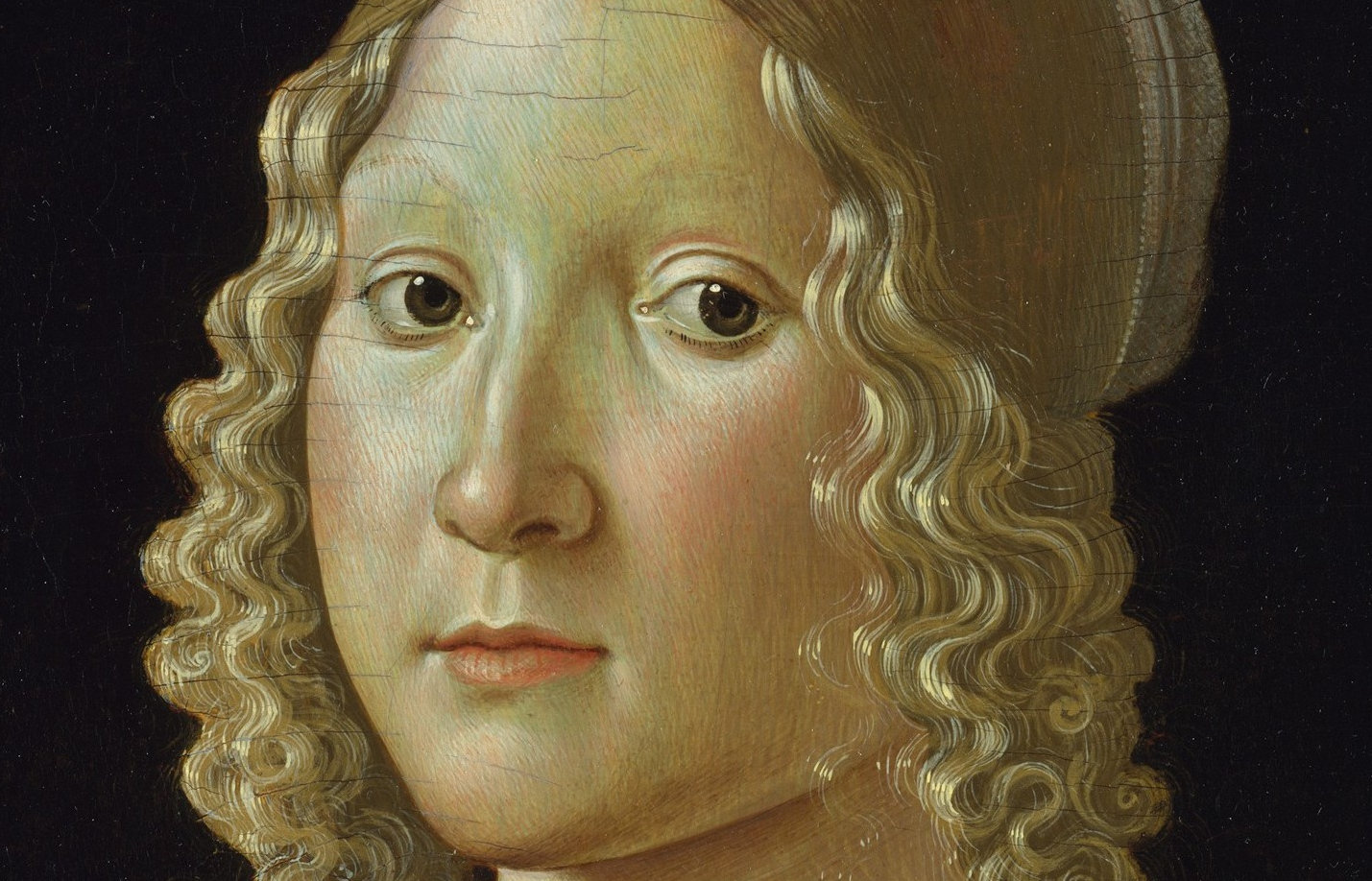 Probably painted by Domenico Ghirlandaio’s brother Davide, the sitter of this striking portrait has been identified as the fifth daughter of the banker Francesco Sassetti (he had seven daughters in all). The occasion may have been her marriage to Simone d’Amerigo Carnesecchi in 1488. Her well-to-do clothes include a coral necklace with a gold pendant with a red stone and three pearls. The three-quarter view and the manner in which the bust is cut off, with the arms acting as supports, remind one of sculpted portrait busts.

Two portraits of this young woman exist: a life-size full-length in Domenico Ghirlandaio’s mural of the Raising of the Roman Notary’s Son in the Sassetti chapel of the church of Santa Trinita, Florence, and this bust-length that shows her standing before a plain background which was originally blue, the azurite pigment having discolored. The mural contains over a dozen portraits of members of the banker Francesco Sassetti’s household, including three daughters who stand and kneel in the front row of the mural, which was completed by Christmas Day 1485: sixteen-year-old Lisabetta on the far left, in a white brocade gown with her hair elaborately coiffed in the Florentine bridal fashion (since she was betrothed as the mural was being executed); fifteen-year-old Selvaggia in a gown of the light blue color called cilestri di bianco in contemporary inventories, with the loose hair of young unmarried Florentine women; and eleven-year-old Maddalena, kneeling as the distraught figure by the catafalque, with the long blond hair and red dress of her name saint. In 1488, Selvaggia married Simone d’Amerigo Carnesechi. Her wedding is the most likely occasion for commissioning the Museum’s portrait, in which she is more mature than she is in the mural, which was painted three years earlier.Infrared reflectography reveals summary lines for the eyes, eyebrows, the eye socket of the sitter’s left eye, and the nose, lips, and chin. Before drawing these lines on the panel, the artist must have made a preparatory study like the large metalpoint drawing by Domenico Ghirlandaio’s younger contemporary Filippino Lippi of the bust of a stern matron in the Gabinetto disegni e stampe degli Uffizi, which, coincidentally, shows the sitter in the same pose as the young woman in the Metropolitan’s portrait, with her body turned slightly to the right, her head inclined to the left, and her eyes focused on the spectator. Van Marle’s (1931) suggestion that a drawing of a young woman in the British Museum is a sketch for the Metropolitan’s portrait is sometimes repeated in the literature (Venturi 1933, Wehle 1940, Ragghianti Collobi 1949), but the drawing bears only a superficial resemblance, and it is now accepted as by Perugino (A. E. Popham and Philip Pouncey, Italian Drawings in the Department of Prints and Drawings in the British Museum: The Fourteenth and Fifteenth Centuries, 1950, p. 117).

Since Van Marle first published the panel in 1931, it has been widely accepted as an autograph work by Domenico Ghirlandaio, though some doubts have been expressed orally. In the most recent monograph on Ghirlandaio, Jean Cadogan (2000) catalogued it with Domenico’s autograph work but qualified her attribution by saying the portrait “is probably by an unidentified helper in Ghirlandaio’s workshop.” She did, however, observe the “pronounced left-handed hatching of the brushstrokes,” with diagonal hatching from the top left to lower right, which recur in other Ghirlandaiesque works attributed to Domenico’s younger brother David. In fact, David was the only left-handed painter working in Domenico’s circle (Jill Dunkerton. “Michelangelo as a Painter on Panel.” In Making & Meaning: The Young Michelangelo. Exh. cat., National Gallery, London, 1994, pp. 83–105) , with whose work the present portrait is consistent.