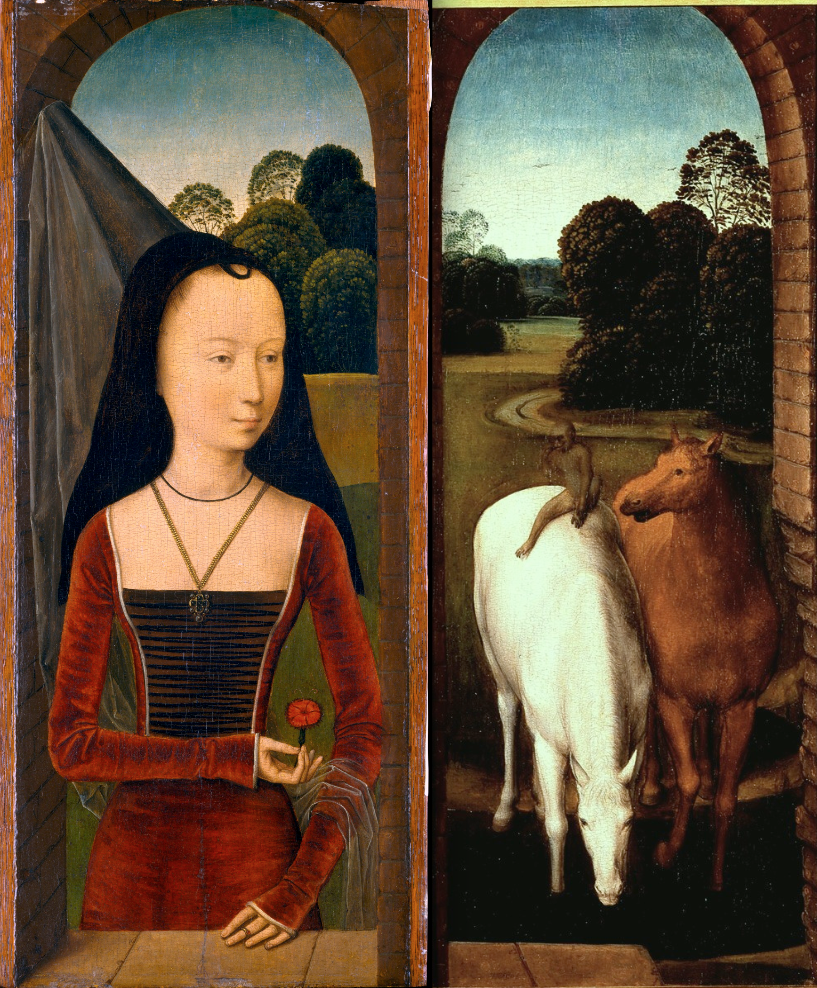 ” Rather than depicting a specific woman, this painting of an idealized beauty was once part of an allegorical diptych. Together with its pendant (Museum Boijmans van Beuningen, Rotterdam), the panel represents the virtues of true love and the obstacles it must overcome. The woman holds a pink, a flower symbolizing betrothal or marriage. She gazes toward the pendant panel, which depicts two horses and a monkey, symbols for the man in love and the opposing attributes of lust and faithfulness. “

” This painting of a young woman holding a pink, standing behind an arched window through which a landscape can be seen, was once thought to be a portrait. The pink, or carnation, is a symbol of betrothal when present in a secular image. If this painting was truly a portrait, one might expect to find a matching panel with a portrait of the young lady’s betrothed. Instead, the companion panel is Two Horses and a Monkey in a Landscape (Museum Boijmans van Beuningen, Rotterdam). It depicts a brown horse and a white horse with a monkey on its back, behind a matching arched window, with a landscape that is continuous with the background of the MMA panel. Allegorical images are rare in Netherlandish art of this period. Panofsky (1953) was the first to examine the symbolic meaning of the pair. Together, these two panels form an allegory of true love: betrothal is represented by the pink, while in the tradition of medieval poetry, a horse relates to a man in love. The two horses represent lust and faithfulness. The monkey, a traditional symbol of evil, rests on the back of the white horse, which ignores the young lady to satiate its thirst, emphasizing its self-gratification. In contrast, the brown horse gazes at the lady in devotion. The crumbling bricks on the right side of the archway, which are nearest the brown horse, are symbolic of faithful love overcoming the temptations of evil (De Vos 1994). “ 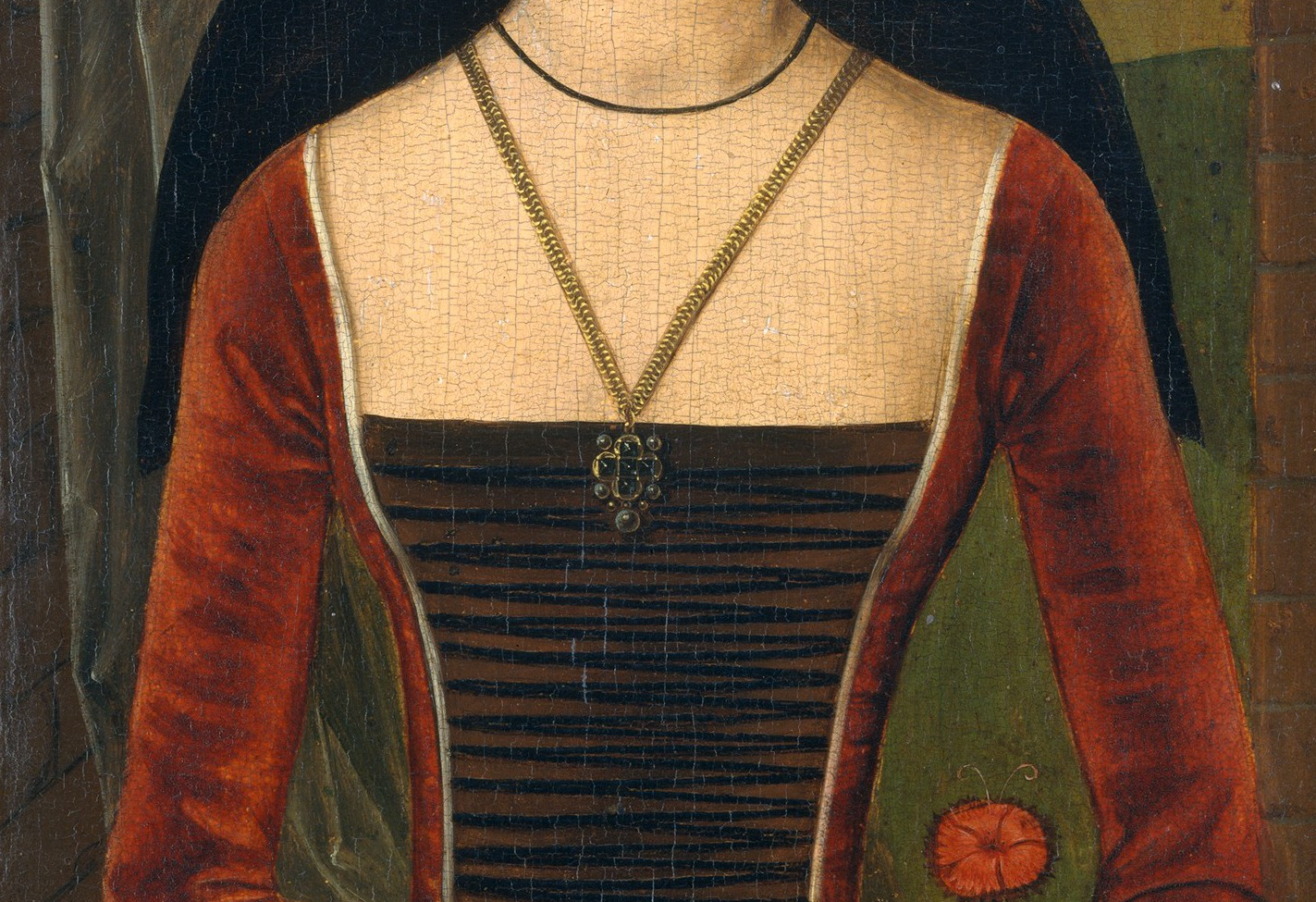 ” The young woman’s costume derives from Burgundian court styles of around 1470 and can be compared with Maria Portinari’s dress in Memling’s portrait of her. Campbell (1995) notes, however, that the costume is not quite correct—the artist did not include the eyelets necessary for the laced front of the dress. Her clothing is from a somewhat earlier decade than it was painted, and is probably deliberately old-fashioned (De Vos 1994). It seems likely that the evocation of the Burgundian court relates this allegory to courtly love, and to the relationship between men and women that takes inspiration from medieval chivalric modes of conduct. This pair is part of a group of painted allegories of love and virtue attributed to Memling which also includes Allegory with a Virgin (Musée Jacquemart-André, Paris) and the Earthly Vanity and Divine Salvation Triptych (Musée des Beaux-Arts, Strasbourg).

This lady’s appearance is in keeping with Memling’s anonymous female type, but the weakness of the execution indicates that this was not painted by the master. There is a certain flatness to the lady’s face, an awkward position of her arms, a strange perspective of the arch, and trees which are formulaic in design and execution. The awkward landscape may be the work of the same artist who painted the landscape in Memling’s Portrait of a Man (Uffizi, Florence), and possibly the exterior wings of the Pagagnotti Altarpiece (central panel: Uffizi, Florence; wings: National Gallery, London; see Sprinson de Jesús 1998). Scholars have debated the attribution of both the MMA panel and its mate. Examination with infrared reflectography has revealed no underdrawing in either. The two panels, which share similar dimensions, were cut from the same tree, but cannot have been the front and back of the same panel (Klein 1994). Together, they most likely formed a diptych, either fixed or folding. Another possibility is that they may have been the exterior wings of a triptych—the backs of both panels are planed down, suggesting that they may have been cut from interior panels. “