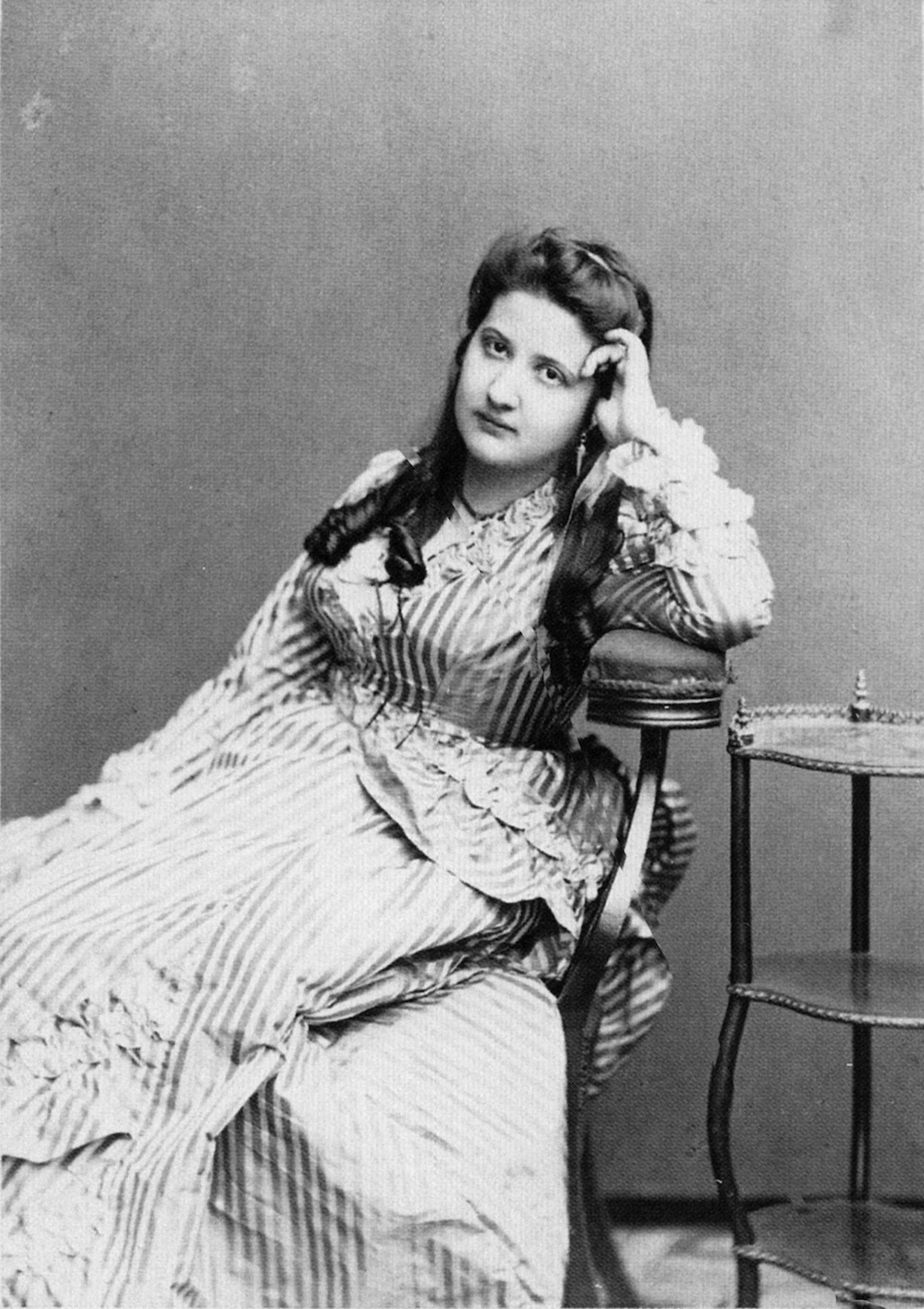 Anna von Lieben (* 26. September 1847 in Vienna; † 31. Oktober 1900 Ebenda) became famous as Sigmund Freuds patient Cäcilie M.. She was a daughter of Eduard Todesco (since 1869 Eduard Freiherr von Todesco) and his wife Sophie Gomperz. The wealth of the Jewish Todesco family was surpassed by the Rothschilds only by little.

In 1866, aged 18, she fled from home to her sister Franziska (named Fanny) in London, who had married 28. April 1866 the wealthy Heinrich von Worms (aka Henry de Worms). The marriage did not last. In London Anna fell (mentally) ill.

Anna suffered from hysteria and was often chained to the bed. After the birth of her children she became addicted to morphine. Hugo von Hofmannsthal, who visited regularly, described her as animalistic, sensual, mad. In 1887 she met the ten years younger Sigmund Freud, who took her in his care until 1895. She became history as the case of Cäcilie M. She lived in constant fear to be put in an asylum.

Born into a rich Austrian Jewish family, Anna von Lieben was referred to Freud in the late eighties for help with a long-standing series of nervous disorders. After referring her for a consulation with Charcot, Freud treated her (with some short-term success) through hypnotism, taking her with him to see Hippolyte Bernheim in 1889 in the (unsuccessful) hope that he might be able to work a permanent cure. He also used abreaction for temporary relief of her symptoms, noting however that her sense of guilt and self-reproaches would swiftly return after the treatment sessions.

Her symptoms, including hallucinations and physical spasms, did much to teach Freud about the reality of conversion hysteria; and how to interpret back from physical symptom or hallucination to the underlying (symbolic) emotional meaning it expressed, often by a ‘punning’ logic.

“Frau Cäcilie M.” is the pseudonym given by Sigmund Freud to Anna von Lieben (her identity was discovered by Peter Swales [1986]), a patient Freud described only briefly in the Studies on Hysteria (1895d). Born Baronne von Todesco in 1847 into a rich Jewish family living in Vienna, she was treated for several years by a number of celebrated physicians, including Jean Martin Charcot, before being sent to Freud, in 1887 or early 1888, by either Josef Breuer or Rudolf Chrobak.

Freud treated Cäcilie M. until November 1893. Although the case receives scant attention in the Studies on Hysteria and in his correspondence with Wilhelm Fliess, it was significant. “This was shown in the case of another patient, Frau Cäcilie M., whom I got to know far more thoroughly than any of the other patients mentioned in these studies. I collected from her very numerous and convincing proofs of the existence of a psychical mechanism of hysterical phenomenon such as I have put forward above. Personal considerations unfortunately make it impossible for me to give a detailed case history of this patient, though I shall have occasion to refer to it from time to time” (1895d, p. 69)

Von Lieben had been suffering sporadically from a facial neuralgia when she became Freud’s patient. In 1925 Freud wrote that she had been sent to him “because no one knew what to do with her” (1925d, p. 18) after thirty years of hysterical disturbances, absences, and pain, which, against a background of depression and feelings of low self-esteem, had led to a serious morphine dependence.

She was nine years older than Freud and was forty-one when he met her. Through her mother, born Gomperz, she found herself involved in a family that played an important role in Freud’s life. Apparently, she met him prior to a trip to Paris, since a letter from Charcot dated September 26, 1888, makes reference to a consultation with the Parisian master, a consultation that does not appear to have been the first:

“I am very grateful to you for the details you have provided concerning the state of Madame de L. Your difficult and extensive analysis of the varied and complex physico-psychic phenomena she presents show that you have grown attached to this interesting person just as we ourselves grew attached during her stay in Paris. I am in complete agreement with you on the method to be followed at this time. Moral treatment must play the principal role and, from the point of view of medication, there is absolutely nothing to say in general. One must naturally act following the indications of the moment. With respect to the diarrhea of which she complains and sometimes lasts two or three weeks, wouldn’t it be appropriate to see how she responded to a few centigrams of silver nitrate taken internally? . . . But, I repeat, it is on her psyche that we must act, as you perfectly understood and it is in this way that we can be useful in this case. Moreover, compared to what she was before, the Mademoiselle de L. of today is much better in all respects. She is, as she herself recognizes, up to a certain point prepared to struggle for her life, something she was not willing to do previously” (de Mijolla, 1988).

Because she was difficult to hypnotize, he accompanied her in July 1889 to Nancy to see Hippolyte Bernheim, who failed to obtain the desired results. This setback was part of what led Freud to abandon hypnosis and suggestion, which nonetheless had enabled his patient “to lead a tolerable existence” (1925d, p. 18).

According to Freud, she presented a “hysterical psychosis of denial,” with broad periods of amnesia regarding the traumatic moments she had lived through. Toward the end of 1889 “an old memory suddenly broke in upon her clear and tangible and with all the freshness of a new sensation” and a “cathartic cure” could be undertaken, not however without “accompanied by the acutest suffering and the return of all the symptoms she had ever had” (1895d, p. 70n). It took three years of “chimney sweeping” to pay back “the old debts” (p. 70n), with alternating periods of irritability, depression, and anxiety.

Cäcilie influenced Freud as well; she taught him the mechanism of “hysterical conversion” associated with a process of symbolization. Her trigeminal neuralgia, for example, appeared to be determined by a “traumatic scene” during which her husband had made a remark to her that she re-experienced during treatment, saying “It was like a slap in the face” (1895d, p. 178).

She had an intuition of a future state that led her to remark, “It’s a long time since I’ve been frightened of witches at night,” the night before she experienced this fear. For Freud, “On each occasion what was already present as a finished product in the unconscious was beginning to show through indistinctly. This idea, which emerged as a sudden notion, was worked over by the unsuspecting ‘official’ consciousness (to use Charcot’s term) into a feeling of satisfaction, which swiftly and invariably turned out to be unjustified. Frau Cäcilie, who was a highly intelligent woman, to whom I am indebted, for much help in gaining an understanding of hysterical symptoms, herself pointed out to me that events of this kind may have given rise to superstitions about the danger of being boastful or of anticipating evils” (1895d, p. 76n).

Peter Swales, after a long investigation, has written a fairly complete biography of this patient, who was a member of Vienna’s aristocracy and an active participant in Jewish intellectual life. It is easy to understand the extent to which she could have influenced Freud, who also saw in her a refutation of the theories of Pierre Janet on the congenital deficiencies of the mental state of hysterics. She died on October 31, 1900, of a heart attack.