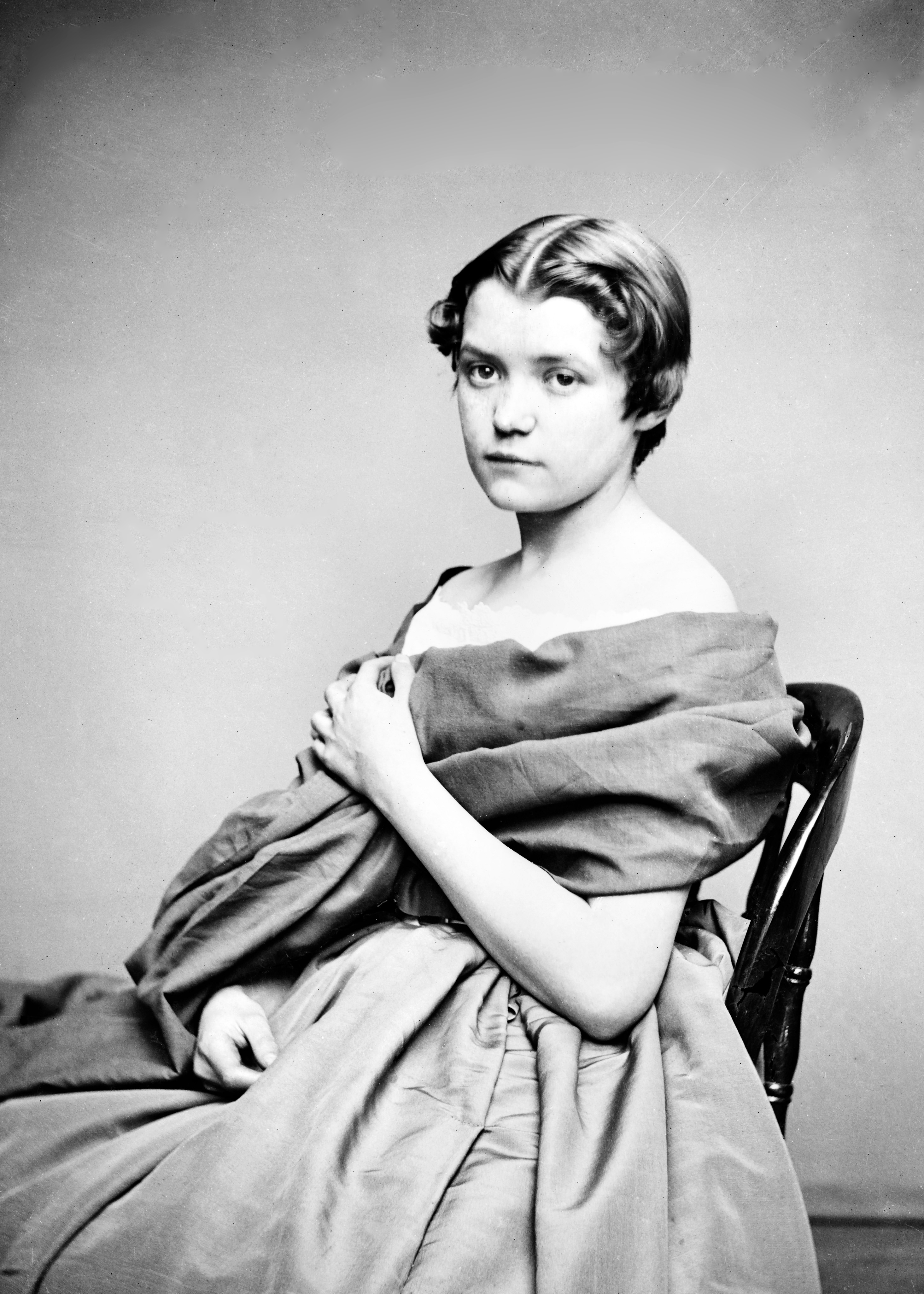 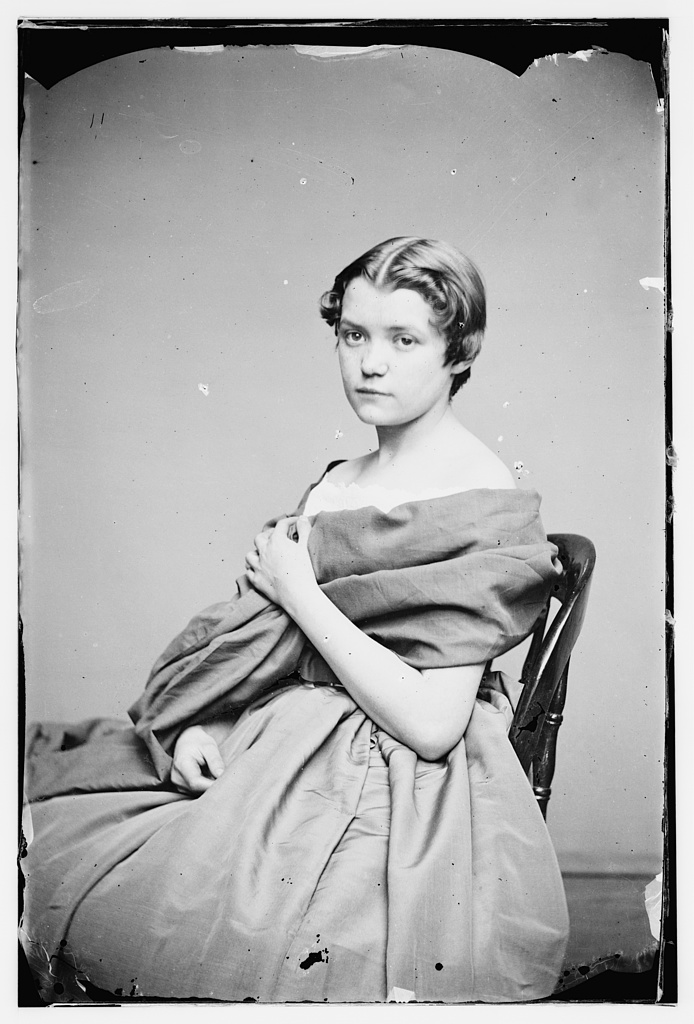 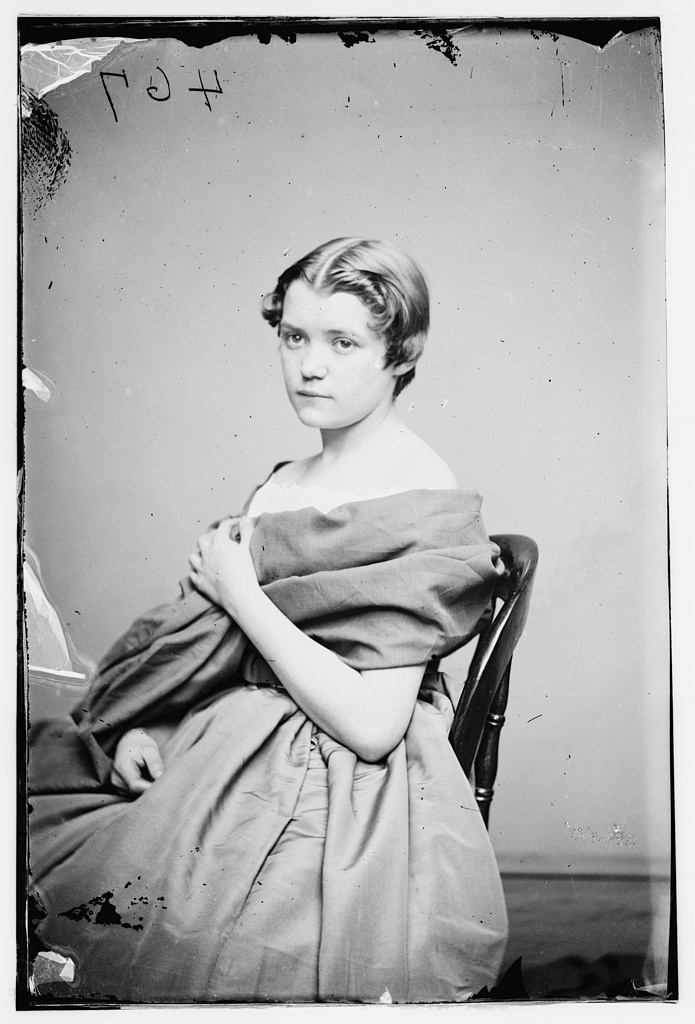 Daughter of Secretary of the Treasury Salmon P. Chase, Kate Chase Sprague married Rhode Island Senator William Sprague during the Civil War. She was beautiful, charming, precocious, a leading social figure in Washington at 19, and a top political aide to her father until his death.

Salmon P. Chase had little luck building a family. Three wives died and four of their six children died as well. Kate Chase, the oldest surviving daughter, was spoiled and ambitious. She had been packed off to boarding school at age 9 because she didn’t get along with her stepmother. At 21, she set out to be the First Lady of Washington in fact if not name. She had no intention of acquiring another stepmother — despite her father’s interest in women such as Adele Cutts Douglas, the widow of Senator Stephen Douglas. Lincoln writer Jerrold M. Packard wrote: ”Aside from his vanity and his intellect, the treasury secretary’s chief possession was his daughter Kate. Probably Chase’s strangest peculiarity was that he ran just about neck and neck with his daughter when it came to national attention. The young, dazzlingly red-haired Kate Chase considered herself her father’s head booster in his quest for the presidency.”

Despite her youth, Kate Chase was the reigning social queen of Washington during the Civil War. Biographer Peg A. Lamphier wrote: “After Willie Lincoln’s death from typhoid fever in early 1862, the mourning Mrs. Lincoln may have remained the titular head of Washington society, but Kate reigned as its sovereign queen.” Historian Doris Kearns Goodwin wrote: “Her social supremacy derived in part from her striking appearance, enhanced by the simple but elegant wardrobe assembled during her many trips to New York in pursuit of furnishings for her father’s mansion.”

Kate had an enchanting effect on men. British journalist William Howard Russell described “her head tilted slightly upward, a faint, almost disdainful smile upon her face, as if she were a titled English lady posing in a formal garden for Gainsborough or Reynolds.” Presidential aide John Hay was once an admirer. He accompanied her to the theater and visited “Pretty Katie” at home. Just before her marriage, Hay wrote a friend: “The town is dull. Miss Chase is so busy making her father next President that she is only a little lovelier than all other women. She is to be married on November 12thth which disgusts me with life. She is a great woman & with a great future.”

Historian Doris Kearns Goodwin wrote: “Kate’s dynamic grace and intellect made her the most interesting woman in any gathering, as well as a critical force behind her father’s drive for the presidency.” She wrote that Kate’s “father’s ambitions and reams became the ruling passions of her life. She gradually made herself absolutely essential to him, helping with his correspondence, editing his speeches, discussing political strategy, entertaining his friends and colleagues. While other girls her age focused on the social calendar of balls and soirées, she concentrated all her energies on furthering her father’s political career.”

Kate’s extravagance in clothes, however, threatened her father’s fragile budget. Her expensive shopping habits were an attribute she shared with the First Lady with whom she shared little else. Kate maintained that her relationship with Mary Todd Lincoln was doomed when she failed to attend a reception in Columbus with her in 1859. “Mrs. Lincoln was piqued that I did not remain at Columbus to see her, and I have always felt that this was the chief reason why she did not like me at Washington.”

Kate wasn’t beyond trying to influence the President himself, writing him in February 1863: “Allow me to offer a modest but earnest plea in favor of Genl. Julius Stahel. That the name of so brave a soldier so faithful a General & so careful an observer of all the Laws — (both Military & Civil) — which should govern a man with such responsibilities, shall not be dropped from the List of those who are to have their respective services rewarded by the Senate.” Stahel received his promotion to major general a month later.

Like much of male Washington, Rhode Island Senator William Sprague was clearly infatuated with Kate. He admitted: “The business which takes my time, my attention, my heart, my all…is of a certain young lady who has become so entwined in every pulsation, that my former self has lost its identity.” Biographer Peg A. Lanphier wrote: “Although her many detractors have long maintained that she married William in a heartless attempt to gain power through his tremendous fortune, it appears that Kate viewed William’s money as secondary to the high position and accolades due her as the treasury secretary’s daughter and hostess.”

President Lincoln attended the opulent Chase-Sprague wedding in November 1863. Mrs. Lincoln was conspicuously absent. Chase family chronicler Lamphier wrote: “By 7:30 on the evening of 12 November, carriages lined both Sixth and E. Streets to deliver their passengers at Salmon P. Chase’s rented Greek Revival mansion. Traffic came to a veritable standstill for blocks while elite Washington society waited to gain entrance to the social event of the season.” Presidential aide William O. Stoddard wrote: “The social event of the past week was the wedding of Senator Sprague and Miss Chase. Never did anything go off more neatly. The ‘tableau,’ as they call it, at the marriage itself was charming; and the dress reception in the evening, and the informal one next day, were entirely pleasant. The presents were magnificent – silver, pearls, diamonds, &c., to the tune of a hundred thousand or so. The worthy young couple certainly have a very fair start in life, and hosts of friends to wish them joy and success.”

According to biographer Lanphier: “The ceremony, conducted by the Episcopalian bishop Thomas Clark of Rhode Island, lasted less than thirty minutes; the subsequent ‘congratulatory manifestations by friends’ as they passed through the receiving line took considerably longer.” Lanphier wrote: “Kate’s large reception served her father’s need for public display. Salmon expected his guests’ elegance to reflect his own prominence, and indeed newspaper accounts of the festivities at Sixth and E Streets emphasized both the August nature of the company and the magnificence of their costumes. One guest reported that the wedding ‘was a great display of elegance and riches.’ Salmon could view the festivities as reflecting his high political status as well as to his increased political and economic aspirations.” Presidential aide John Hay, who had escorted Kate to the theater only a few days before, reported in his diary that night: “Kate looked tired out and languid especially at the close the evening when I went in to the bridal chamber to say good night. She had lost all her old severity and formal stiffness of manner, & Seemed to think she had arrived.”

Kate Chase carried on her own grudges against Mrs. Lincoln. Historian Catherine Clinton wrote: “The Chases…maintained a relentless campaign against the First Lady in other ways, portraying Mrs. Lincoln as someone whose financial improprieties lowered the tone of the White House. This was also hypocritical, because Kate Chase accepted extravagant gifts from Jay Cooke, a Philadelphia financier who sent lavish tokens of his esteem – including an expensive open carriage.”

Kate Chase Sprague was politically astute and economically naive. Her extravagances annoyed her new husband and contributed to the marital difficulties they soon experienced. (Sprague’s poor and unpatriotic business practices also put a strain on their relationship.) Historian Doris Kearns Goodwin wrote: “Though he had made her responsible for redecorating his several multimillion-dollar households, he angrily rebuked her in private and in public for exorbitant spending. ‘Can it be,’ she later lamented in her diary, ‘that he would keep this hateful thought of my dependence ever before me, forcing me to believe that every dollar given or expended upon his home is begrudged?’” Their relations were also undermined by her husband’s drinking and affairs as well as her pride. She herself admitted: “Proud, passionate, and intolerant, I had never learned to submit.”

Mrs. Sprague spent freely to furnish the new Chase-Sprague home. Her father grew concerned: “I need hardly caution you to avoid extravagance, as it is going to be hard work to make both ends meet here; and if any circumstances should compel me to resign before long my expenses shall have far exceeded my income. It does seem a little hard that one who has so much & such important work to do as I have had for the past twelve years should all the time have to pay such a large part of his own expenses.”

Chase’s cabinet salary was $8000 — an increase from $1800 as governor of Ohio but insufficient in view of the needs and tastes of Kate and younger daughter Nettie. Although Chase tried to maintain a facade of the separation of his personal and public finances, the fact was that financier Jay Cooke ingratiated himself into the family finances by gifts which Chase conveniently decided (like a new carriage) had been given to his daughter. Chase wrote to Cooke: “A public officer while in office must accept no presents beyond those which the ordinary intercourse of society prompts and flows from friend to friend.” Chase advised Cooke: “Please in your correspondence keep public and private matters entirely distinct.” Put into final straits by his daughter’s extravagances, Chase came to rely on advances and investments by Cooke in order to keep afloat financially. Cooke’s policies allowed government bonds to be marketed outside of the normal financial circles to ordinary Americans and thus greatly expanded the government’s borrowing abilities. Chase’s subordinates did not have the same rectitude — whether supervising customs or the cotton trade.

Kate was continually ambitious for her father — acting as his de facto campaign manager for the 1868 Democratic presidential nomination. Chase often seemed to maintain a better relationship with his son-in-law than Kate did. Kate herself put her father’s interests above those of her husband. Her relationship with husband William Sprague was rocky even before they married. Sprague cut off the relationship at one point when he learned of her prior relationship with a married man. The relationship fell apart over their mutual infidelities in the 1870s. She died a broken woman.