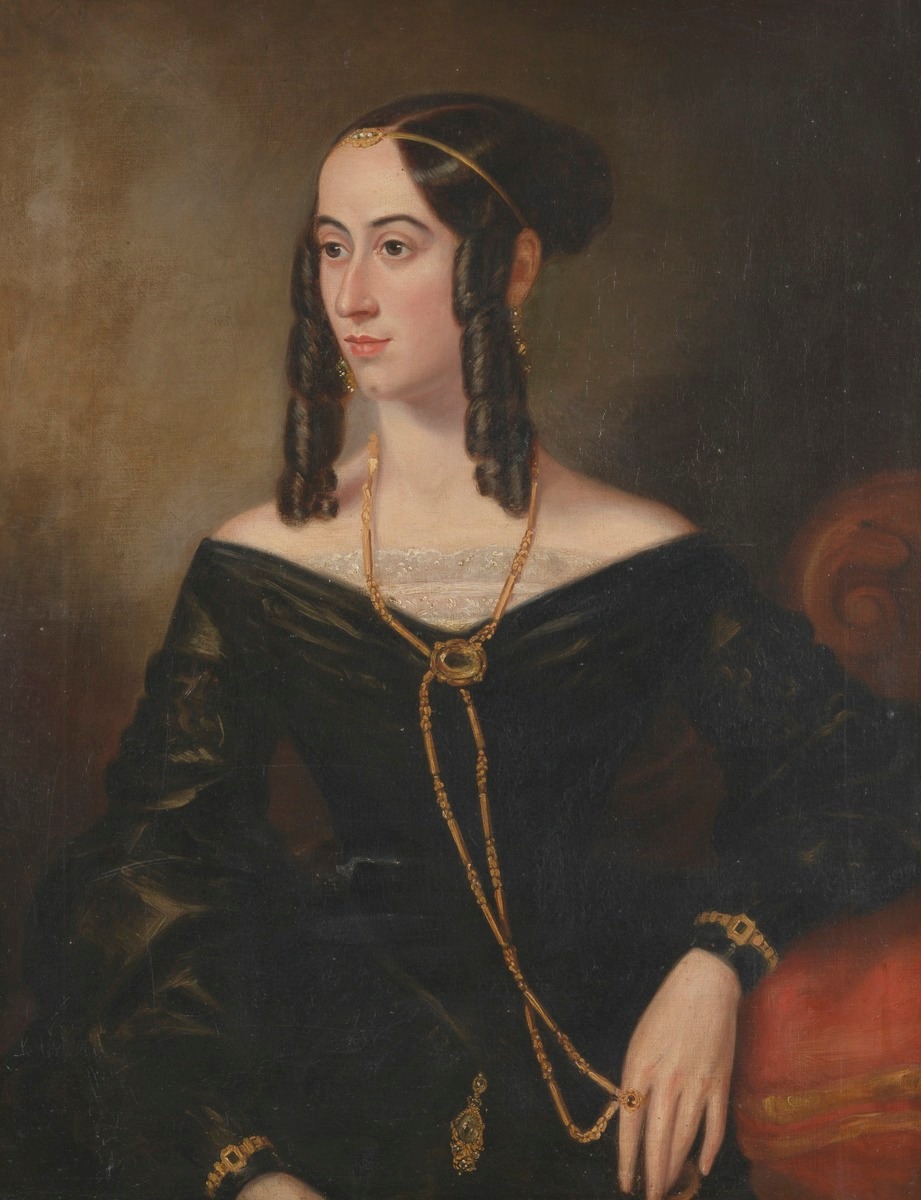 Frances Samuel (1818–c. 1900) arrived in Sydney in 1832 with her widowed mother Lydia; younger brother Saul; and an uncle, Abraham Lyons. They had come to the colony on the recommendation of Frances’s other uncles, Samuel and Saul Lyons, both of whom had become prominent businessmen in the 1820s. Saul Lyons had come to Sydney a free settler; Samuel Lyons had arrived as a convict after receiving a life sentence for theft in 1814. By 1827, despite escapes from custody and other misdemeanours, Samuel had been given a ticket of leave and established himself as a merchant, money lender and auctioneer. Newspaper references to Frances indicate that she enjoyed a genteel existence here for several years before returning to England with her mother in March 1841. Frances married in London in September 1850 and gave birth to a son in 1851. Frances lost both her husband and son during the following decade: the 1861 England census recording her as remarried and residing in St Pancras with Lydia in a household warranting several servants. Letters to her nephew, Edward, written in the 1890s, show that Frances was living in Earl’s Court in her later years.

Frances Samuel (1818-c.1898) was a member of one of early Sydney’s most significant Jewish settler families. Frances, known as Fanny, came to Sydney in 1832 with her widowed mother Lydia (née Lyons, 1783-1865); and younger brother Saul (1820-1900). Lydia Samuel had come to the colony on the recommendation of her brothers Samuel (1791-1851) and Saul Lyons (1799-1878), both of whom had established businesses in Sydney in the 1820s. Saul Lyons had come to Sydney a free settler and at the time of Frances’s arrival was in partnership with her eldest brother Lewis in a pub on Pitt Street. Samuel Lyons came to Australia a convict but as a free man amassed a fortune with various mercantile, property and banking ventures. Frances’s brothers also came to prominence as businessmen and landowners. Saul (later Sir Saul Samuel) was, among other distinctions, the first Jewish man to be appointed a magistrate; the first Jewish man elected to the NSW Parliament; and a key figure in the establishment of Sydney’s Great Synagogue. Although references to the women of the family are rare, it appears that Frances and her mother lived in premises next door to Lyons’s Pitt Street business, where they enjoyed the style of existence typical of genteel women in Sydney at the time.

Maurice Appleby Felton (1803-1842) arrived in Sydney with his wife and four children in late 1839 as surgeon to the immigrant ship the Royal Admiral. Although listed in July of the following year as one of the colony’s ‘duly qualified medical practitioners’, Felton had also by this time established himself as a portrait painter. In January 1840, Felton exhibited examples of his paintings at a shop on George Street. This led to an acquaintance with the merchant and arts patron Alexander Brodie Spark. In September 1840, ‘Mr Felton, Surgeon, top of Hunter Street’ impressed the Sydney Herald with his ‘fine, life size portrait of Her Majesty Queen Victoria’ – a copy of the portrait by Thomas Sully, which Felton had seen in England. In December 1840, The Colonist recommended that ‘lovers of the fine arts pay a visit to Dr. F’s rooms in Hunter Street, and they will have the pleasure of … recognising the likenesses which are in various stages of execution in [his] exhibition.’ His talents as an artist being ‘highly appreciated’, Felton created portraits of a number of Sydney identities between this time and his unexpected and unexplained death, aged 40, in March 1842. Among the sitters depicted by Felton are Spark’s wife, Frances Maria; pastoralist John Marquett Blaxland, his mother Harriott and sister, Anna Elizabeth Walker; Sophia O’Brien, the wife of newspaper proprietor; and Felton’s friend and fellow artist, Conrad Martens. Felton’s works are held in a select number of collections including the Art Gallery of New South Wales, National Gallery of Australia and the Mitchell Library, State Library of New South Wales.