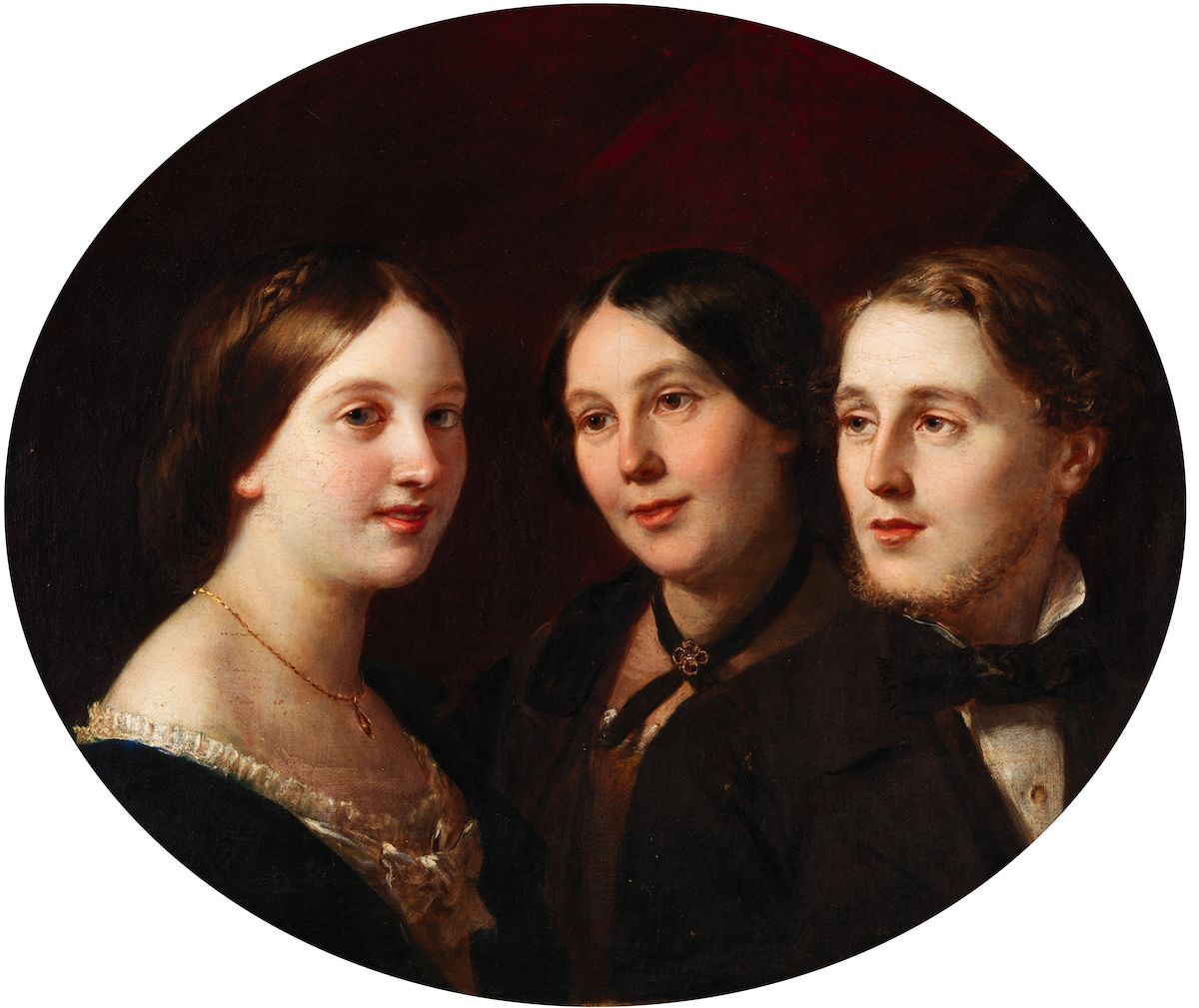 Marianne Egan and her children Gertrude Cahuac and Henry Cahuac were 38, 18 and 20 years old respectively when they died in the Dunbar maritime disaster. Marianne, Gertrude and Henry embarked on the Dunbar with 120 other passengers in May 1857, intending to return to Sydney. Having made good progress, the ship met with foul weather as it arrived off the coast of Sydney around midnight on 20 August. Missing the entrance to Sydney Harbour, the ship was driven by violent seas into cliffs near South Head and ‘rent into a thousand pieces.’ Everyone on board, with the exception of a sailor named James Johnson, perished. While images exist of the sole survivor, this is the only known portrait of victims of the tragedy. The family had sat for the portrait in England but it was unfinished at the time the Dunbar sailed. The painting followed on another vessel, arriving safely a few months after the deaths of its subjects.

Mary Anne Egan (also Marianne or Marian, née Cheers, 1818–1857), was born in Sydney, the daughter of ex-convicts. Her mother, Jane (d. 1823), was transported for theft in 1814; her father, Richard Cheers, was among the convicts transported to New South Wales aboard the Guardian, which struck an iceberg in the Southern Ocean while en route to Sydney in December 1789. Being also among the convicts who stayed on board the Guardian and assisted in keeping it afloat, on finally arriving in Sydney in 1790 Richard was rewarded with land and, eventually, an absolute pardon. He enjoyed considerable prosperity as a publican, butcher, and landlord up until his death in 1827.

Orphaned at nine, Mary Anne with her three siblings was raised by a step-sister in a large household in Phillip Street. She was sixteen when she married Henry St John Cahuac, an ex-convict’s son and clerk to the Superintendent of Convicts, in August 1834. Around 1837, they left Sydney and settled at a farm named Euroka on the Macleay River, near Port Macquarie, where their two children, Henry William (1837–1857) and Gertrude (1839–1857), were born. Following Cahuac’s death in a horse riding accident in December 1841, Mary Anne returned with her children to Sydney; she remarried in 1843.

Her second husband, Daniel Egan (1803–1870), was a shipowner , merchant and former public servant who was among the first aldermen elected to the Sydney City Council in 1842. Egan was briefly the mayor (in 1853); served as a magistrate from 1848 to 1853; and was a member of the NSW Parliament from 1854 until his death in 1870, serving initially in the upper house and then as the member for Monaro and Eden in the Legislative Assembly. Egan also served as postmaster-general, from 1868 to 1870.

In late 1855, Mary Anne, Henry and Gertrude sailed for England, remaining there until embarking on their voyage home aboard the Dunbar, which departed Plymouth in late May 1857. Having made good progress, the ship met with foul weather as it arrived off the coast of Sydney around midnight on 20 August. Missing the entrance to Sydney Harbour, the ship was driven by violent seas into the cliffs near South Head and ‘rent into a thousand pieces’. A crewman named James Johnson was the only one to survive the wreck, with Mary Anne Egan and her children among the 121 passengers and crew who perished.

In 1860, Daniel Egan commissioned three stained glass windows commemorating his wife and step-children for installation in St Mary’s cathedral, which was then under construction. The central panel of the triptych, depicting Mary Anne, was lost when the first St Mary’s burnt down in 1865. The surviving panels were then installed at Subiaco (formerly The Vineyard), a property on the Parramatta River at Rydalmere that had been purchased by the Catholic church in 1848 to house a community of Benedictine nuns. The windows were salvaged prior to the demolition of Subiaco in 1961, and installed at the new Benedictine monastery at Arcadia, north-west of Sydney, where they remain to this day.

The wreck of the Dunbar is still considered one of Australia’s worst maritime disasters; its anniversary is marked each year with a service at St Stephen’s Church in Newtown, where many Dunbar victims are buried.