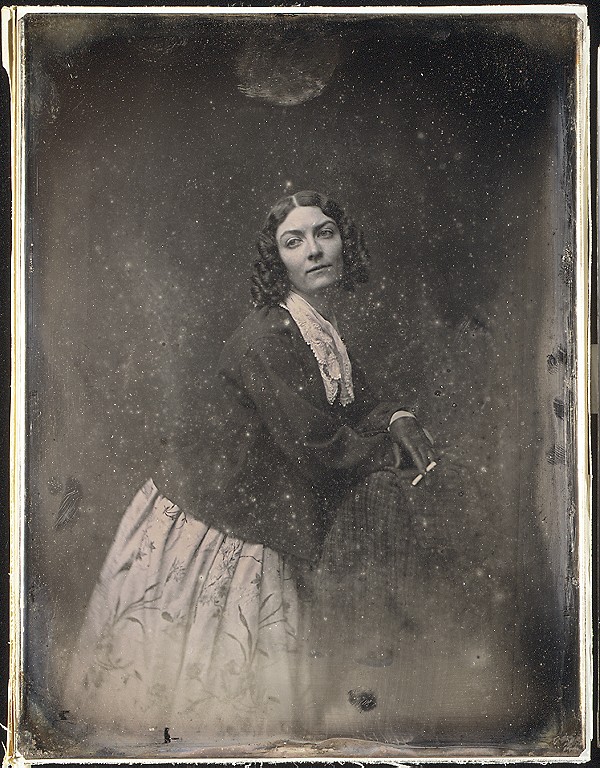 Considered to be the first photograph of a woman smoking, this is Lola’s portrait by Southworth & Hawes.

This is Lola’s third and most provocative and widely recognized daguerreotype, the image of her smoking. In Boston in 1852, she was welcomed to the daguerreotype studio of Southworth and Hawes. The pair captured daguerreotypes of key intellectual and artistic personalities, thus, Lola’s appointment in their studio was a clear signal of her status as a celebrity. The most well known of their daguerreotypes from this sitting shows Lola standing and resting her arms on a fabric covered table. Her wrists are crossed, a gesture of elegance, but she holds a cigarette between her gloved fingers, a particularly controversial detail given that it was not proper for women to smoke in public, let alone be photographed participating in such a gentlemanly activity.

This audacity is consistent with reports of her strolling down streets in European cities and American cities with a cigarette in her mouth, indifferent to the conventions of female behavior or consciously rebelling against Victorian era constraints. Her nonconformity was attributed to her foreignness, but her image also worked to perpetuate associations of smoking to amoral and lascivious behavior, given her scandalous “Spider Dance” and her reputation for taking many lovers.

Irish-born Eliza Rosanna Gilbert (1818-1861) was known by her stage name, Lola Montez. She achieved international fame as a Spanish dancer and adventuress, traveling across Europe, the United States, and Australia. Among her many lovers were Franz Liszt and Alexandre Dumas; in 1846, Montez became mistress to Louis I of Bavaria, who made her countess of Lansfeld. When the Bavarians revolted, forcing the king to abdicate, she fled to America. Montez sat for Southworth & Hawes in 1851, shortly after her arrival in New York, sailing on the same ship as Louis Kossuth. She performed in dramas, enacting her European adventures in Boston, Philadelphia, New Orleans, and San Francisco. Settling in New York in 1856, she became a lecturer on “Women, Love, and Spiritualism,” published several texts including an autobiography, and converted to Christianity.

Via: MET Museum, US History Scene