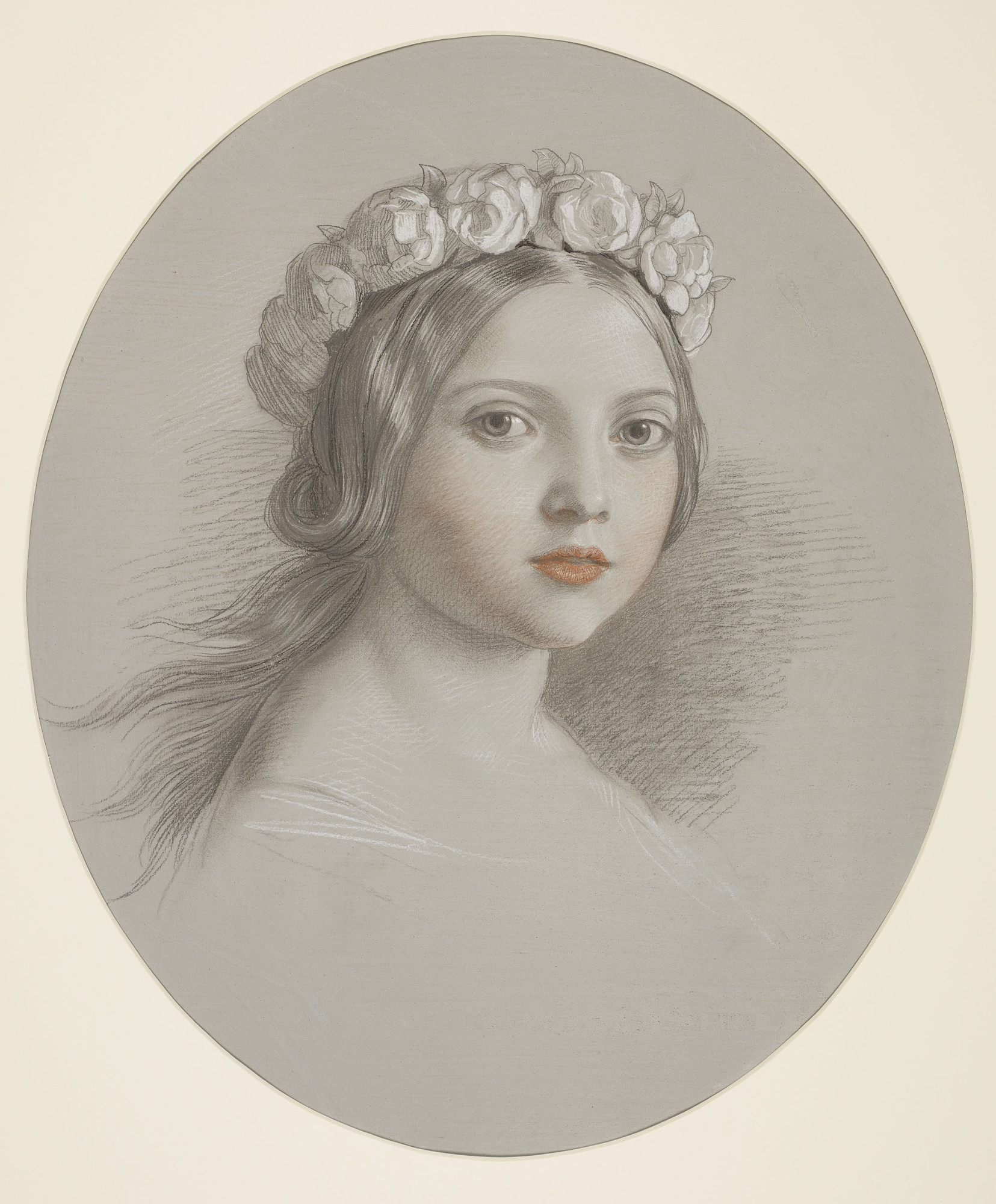 A chalk head and shoulders portrait of Victoria, Princess Royal, at the age of seven, drawn to be framed as an oval. This portrait of the eldest daughter of Queen Victoria and Prince Albert was previously attributed to George Housman Thomas (1824–68), following an annotation in the inventory of pictures at Windsor Castle begun in the 1860s. However, on cataloguing them in the early 1990s, Delia Millar noted that this work and its companion, a portrait depicting Princess Alice, are ‘stylistically unlike other known work by Thomas’.

In January 1848 Queen Victoria made a number of references in her Journal to Princess Victoria and Princes Albert Edward (later King Edward VII) and Alfred having sittings with ‘Mr. Dyce’ at Windsor Castle. On 3 February she noted that ‘Dyce has sent the portraits of the Children, framed, & they really are beautiful, even though not very individual likenesses.’ It would seem that the Queen decided not to keep (or perhaps purchase) the works, as lots 55–8 in the posthumous sale of Dyce’s studio in 1865 comprised portraits of ‘HRH The Prince of Wales, when a child, HRH The Princess Royal, HRH The Princess Alice and HRH The Prince Alfred’, all described as ‘in chalks, in gilt frame, with cardboard mounts’.   A few days later, on 18 May 1865, the Queen bought ‘two drawings by William Dyce RA Portraits of HRH the Princess Royal and HRH the Princess Alice’ from Colnaghi, whose name appears next to lots 56 and 57 in an annotated copy of the studio sale catalogue. Why the Queen apparently rejected the four works in 1848 only to acquire two of them almost twenty years later is puzzling. Dyce’s portrait of Prince Albert Edward, identical in size and technique to the present two works, was acquired by the National Gallery of Victoria, Melbourne, in 1877; the whereabouts of the portrait of Prince Alfred is currently unknown.

She does not look like a seven-year-old to me, she looks much more like a 17-year-old. A very peculiar way to portray a child.