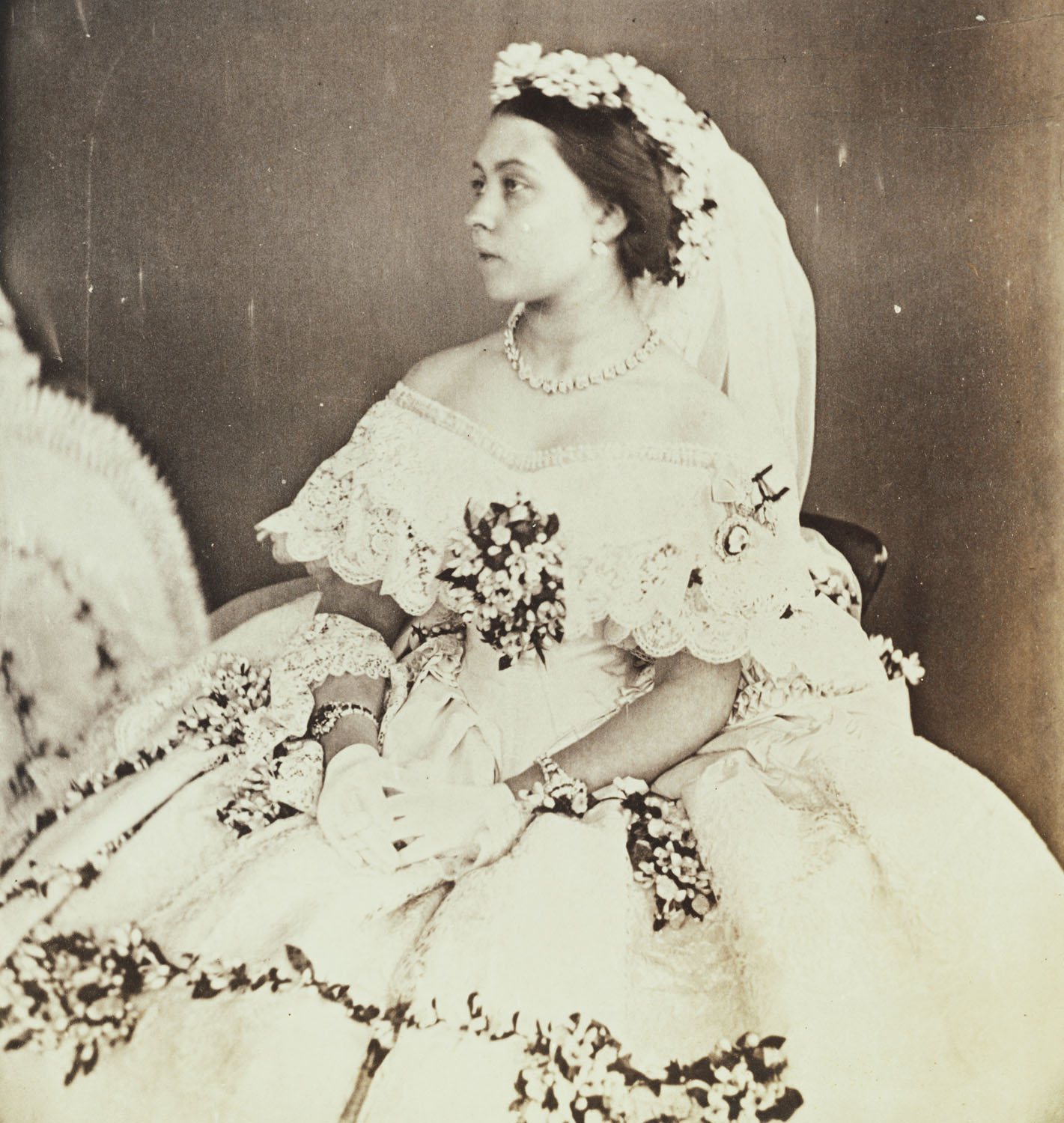 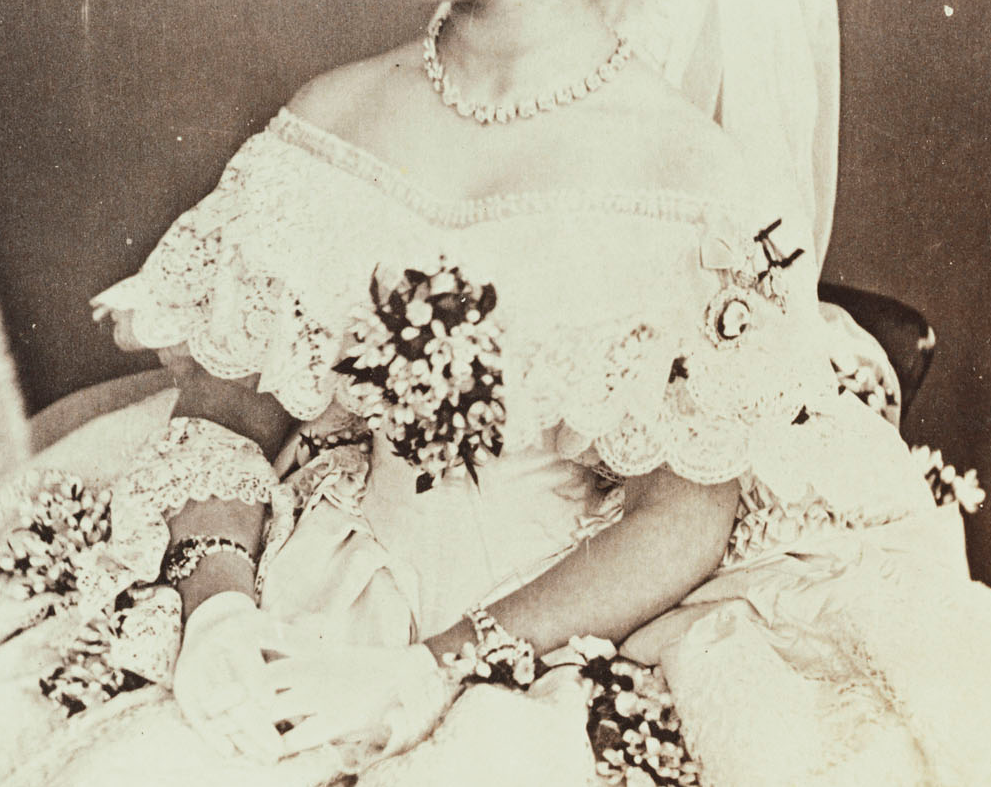 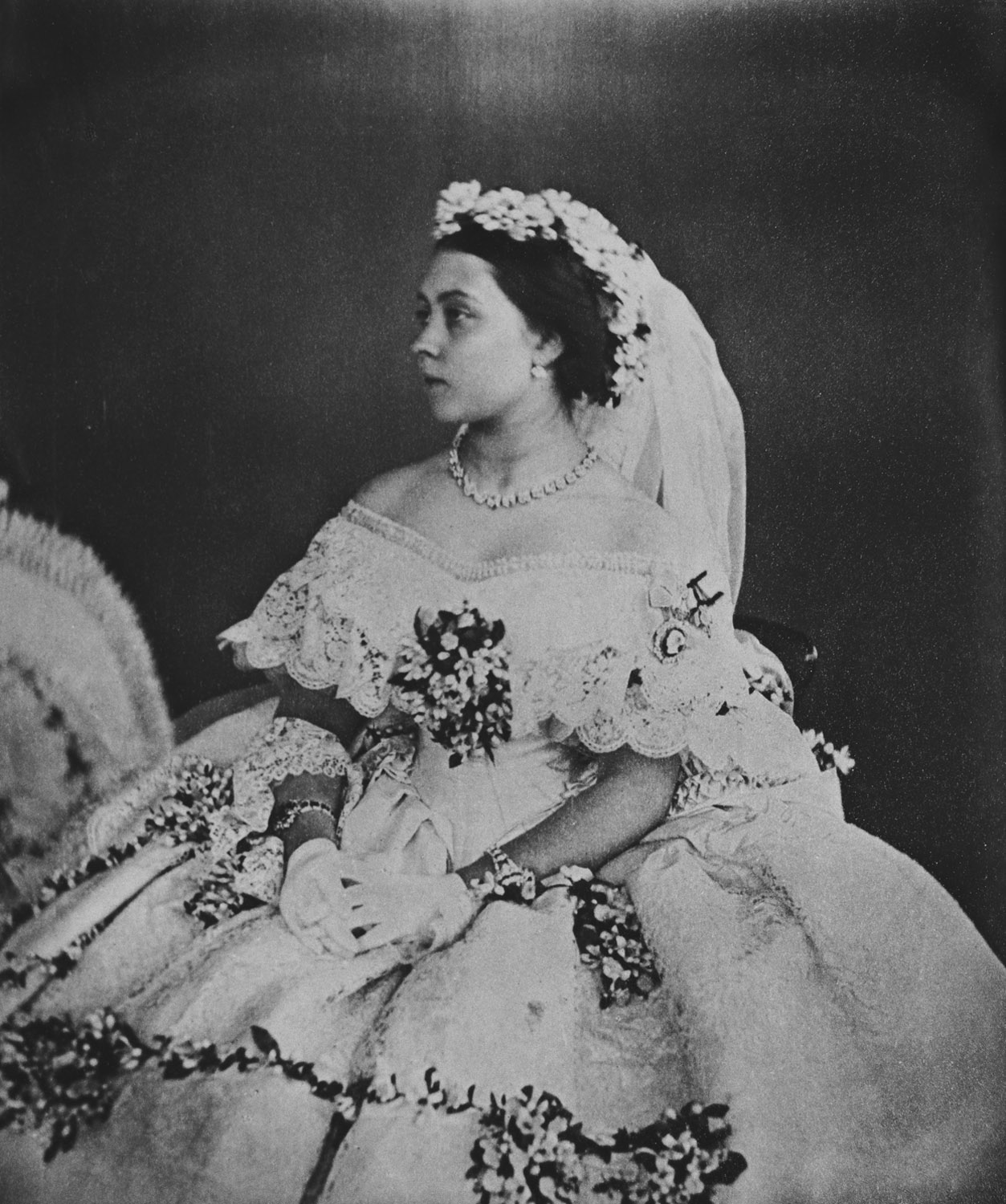 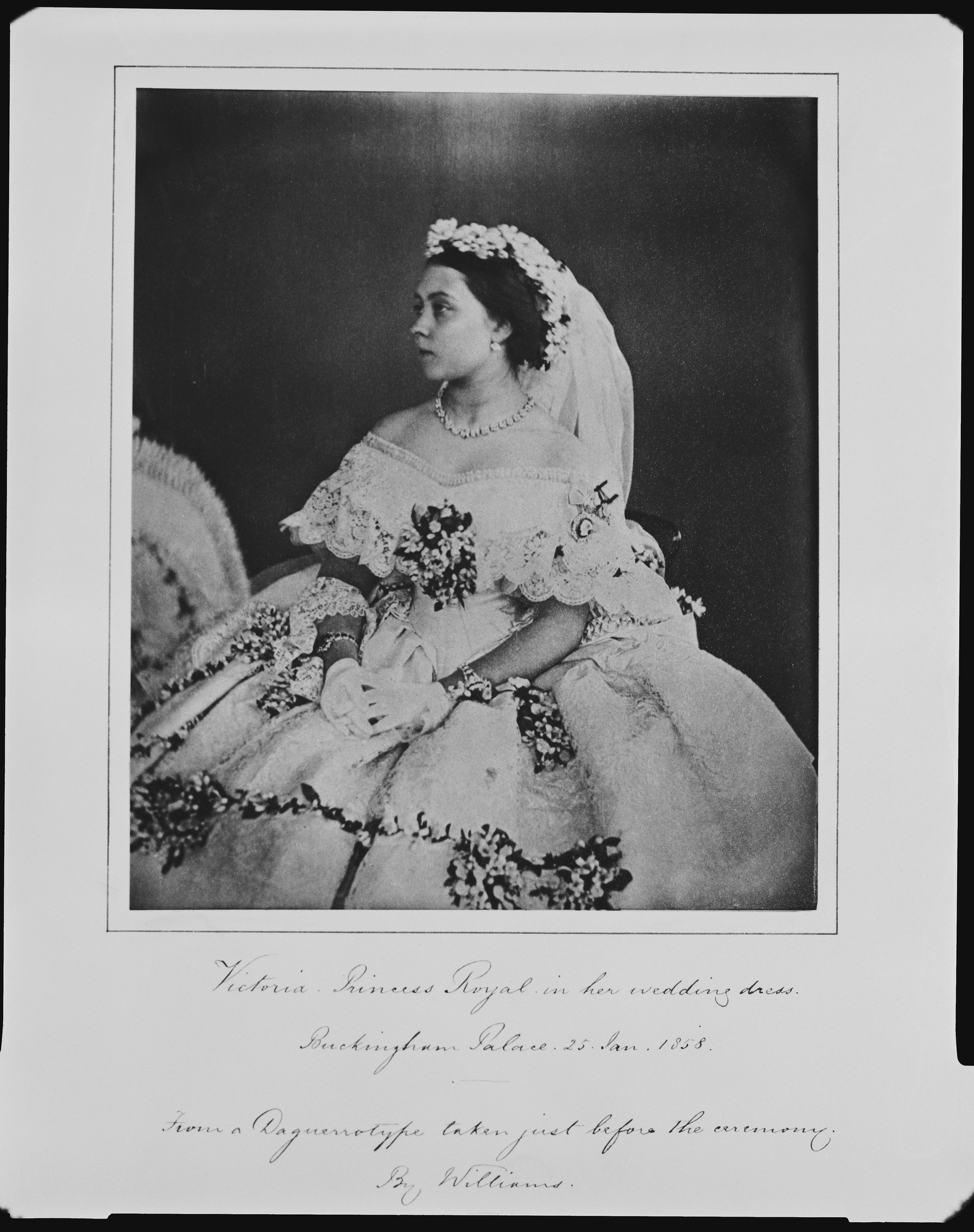 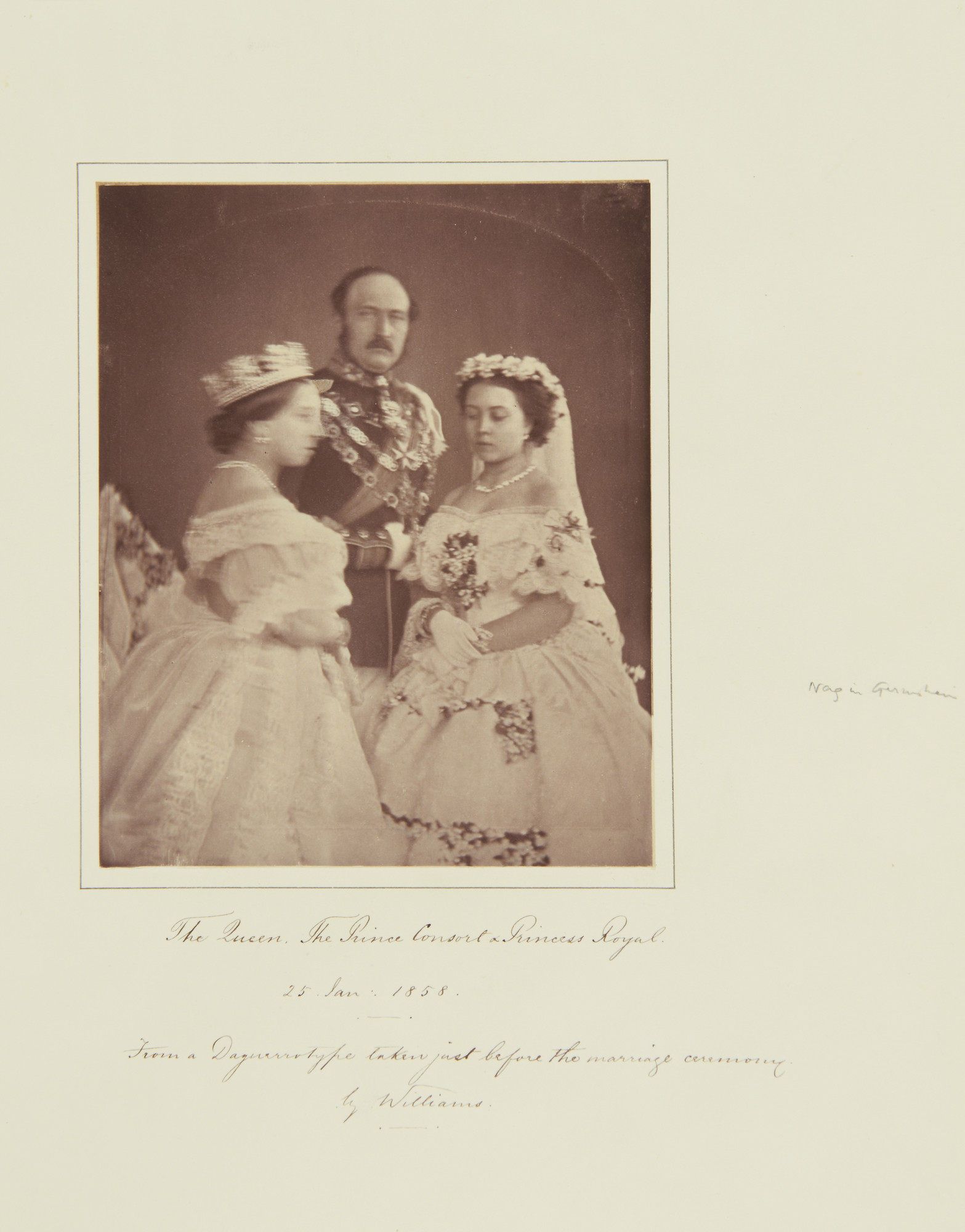 Daguerreotype of Victoria, the Princess Royal in her wedding dress by Thomas Richard Williams, 25 January 1858

On the last photo Queen Victoria and Prince Albert with the bride. The Princess is clad in a dress of white moire antique, trimmed with 3 flounces of Honiton lace and wreaths, and sprays of orange flowers & myrtle, with veil and wreath to match and two insignias on her shoulder. She was 17 years old. 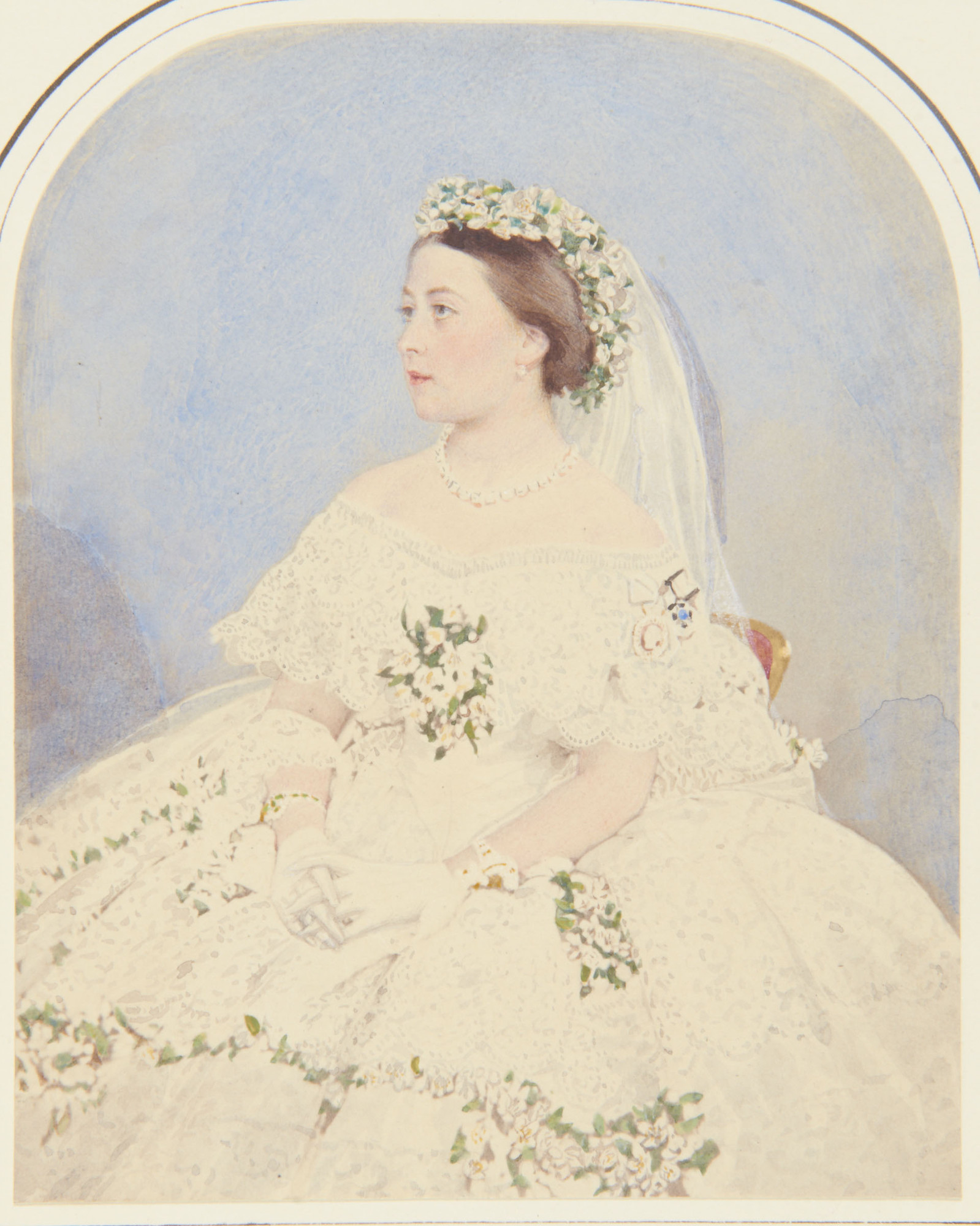 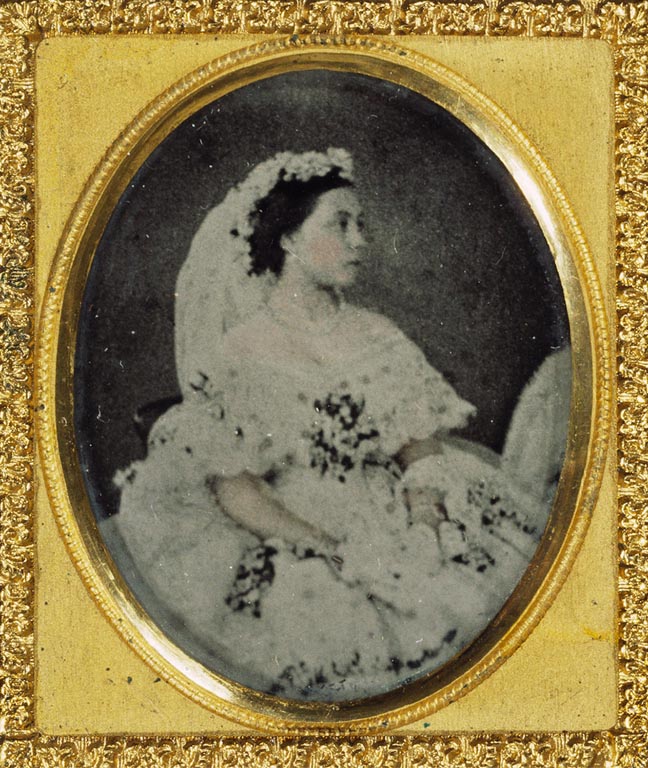 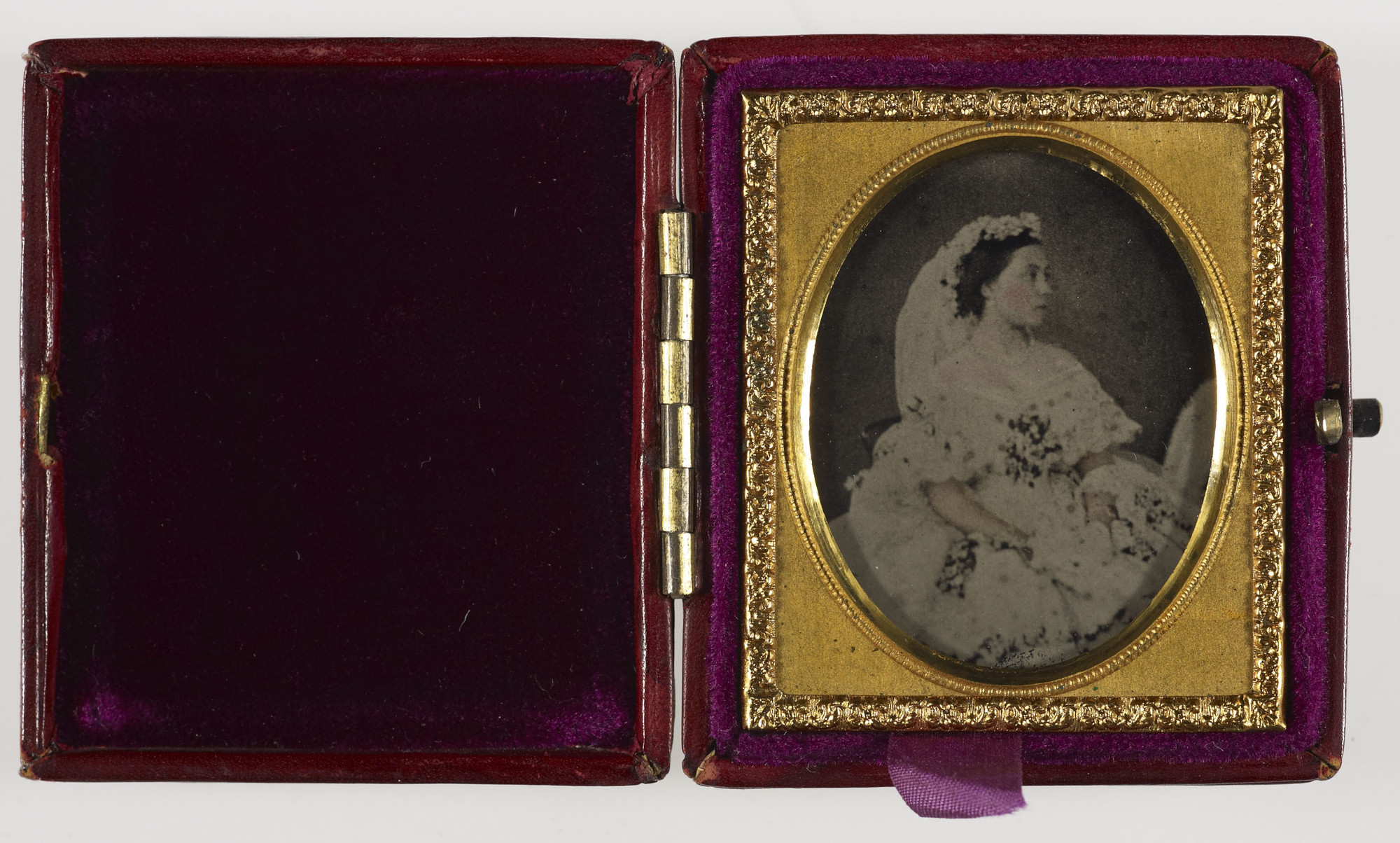 Hand-tinted ambrotype of Princess Victoria wearing her wedding dress. The ambrotype is mounted in a gilt frame housed in a brown leather case with a red velvet interior. Princess Victoria married Prince Frederick of Prussia on the 25th of January 1858 in the Chapel Royal at St James’s Palace. Williams was commissioned to take two photographs to mark the event, the other showing the bride with her parents. There are no photographs of the wedding itself, as it would have been impossible to make adequate exposures in the dimly lit confines of the Chapel Royal. 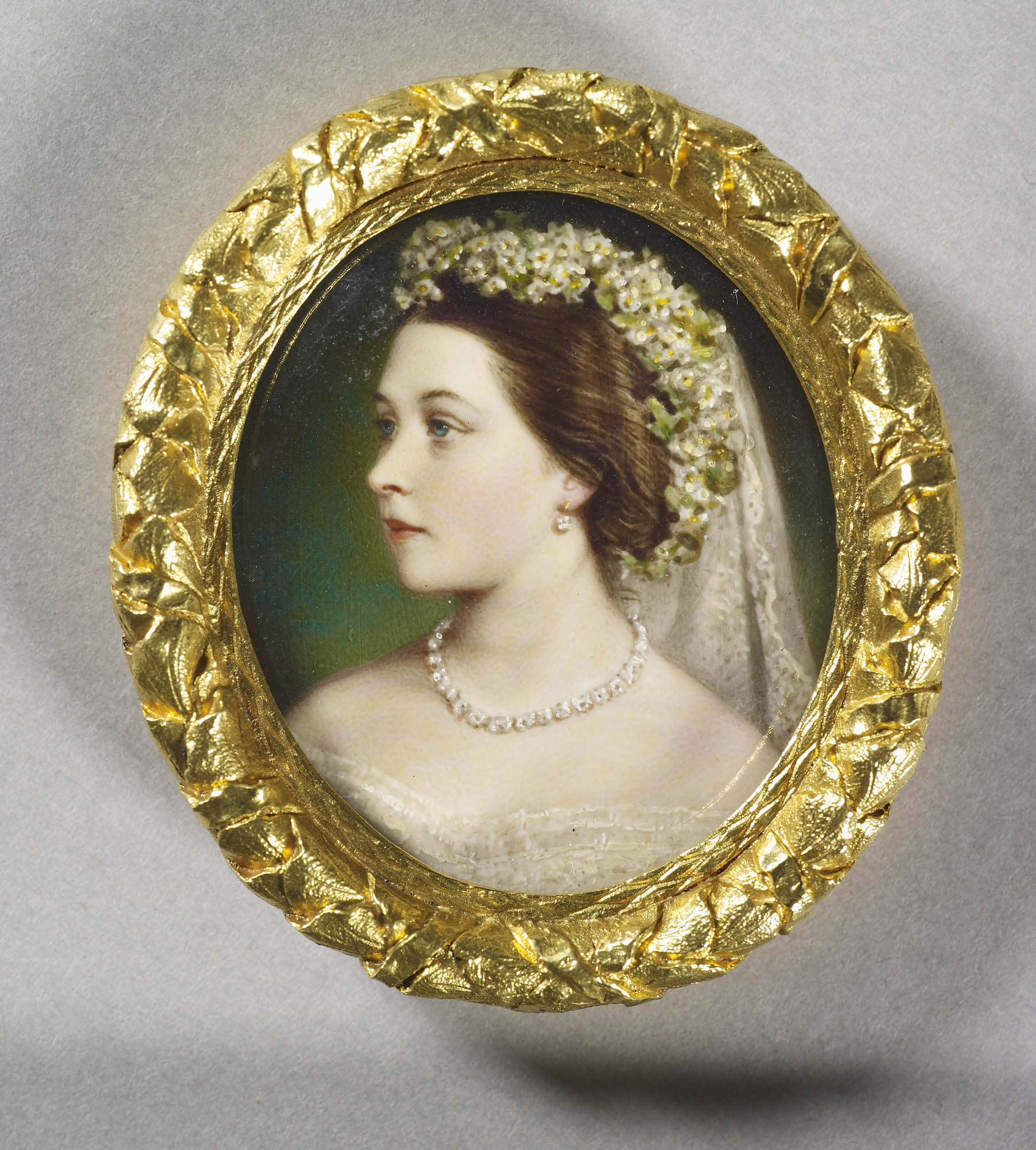 Henry Charles Heath’s miniature is painted over an imprinted photographic base. The photograph of Victoria, Princess Royal, showing her three-quarter-length, in her wedding dress, with an orange blossom wreath, was taken shortly before her wedding ceremony at Buckingham Palace on 25 January 1858. 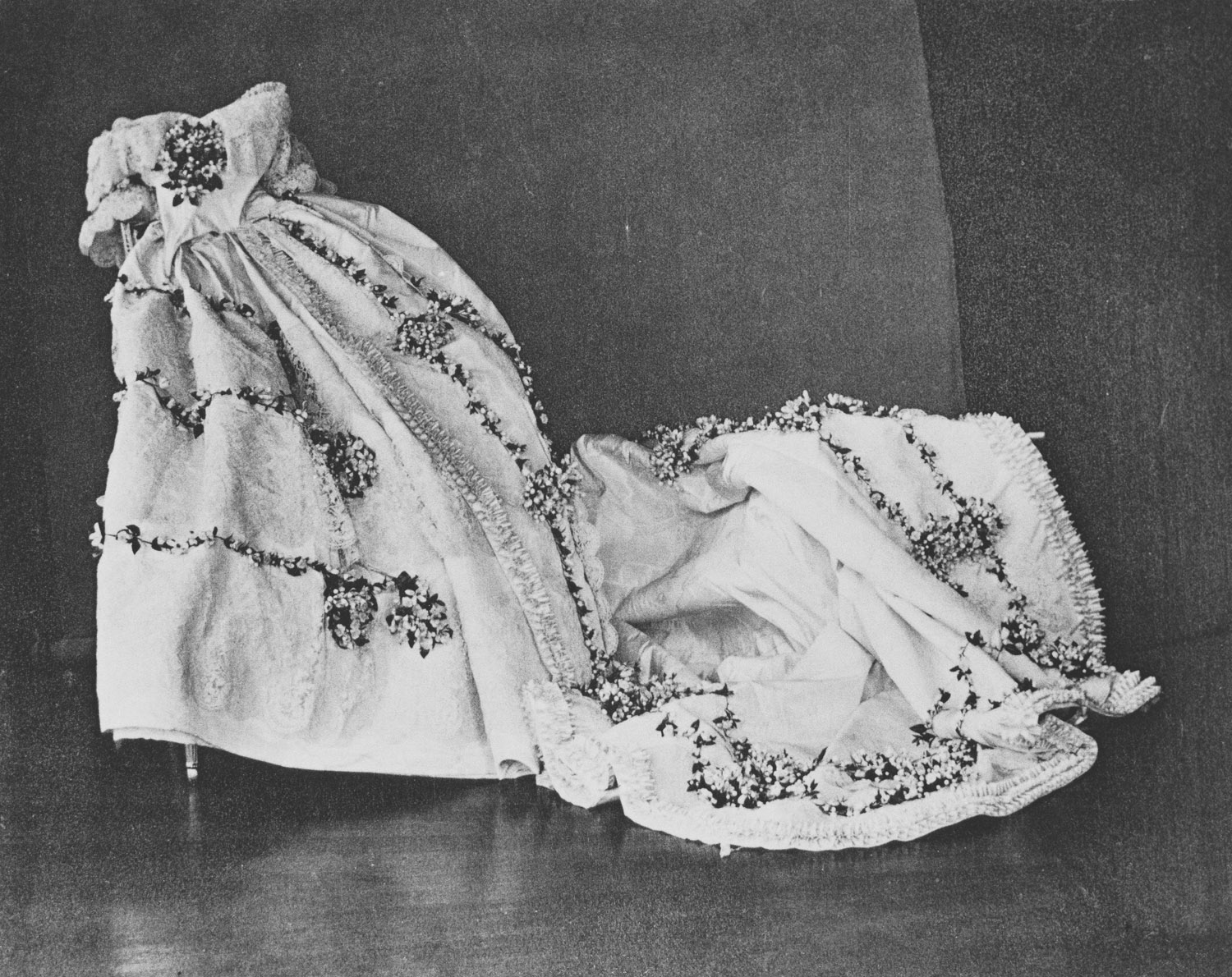 Photograph of the wedding dress and train worn by Victoria, Princess Royal, draped over chairs. 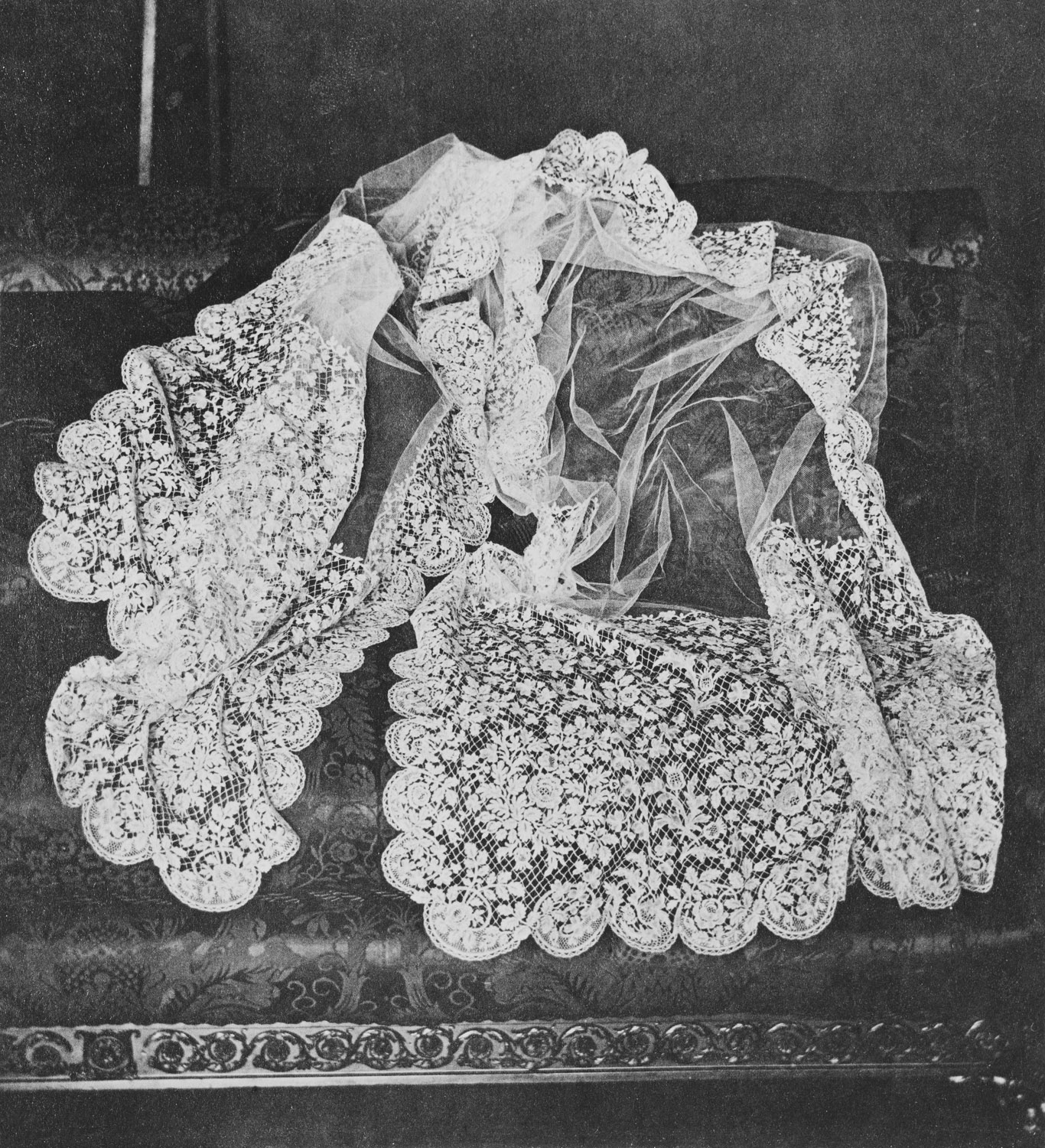 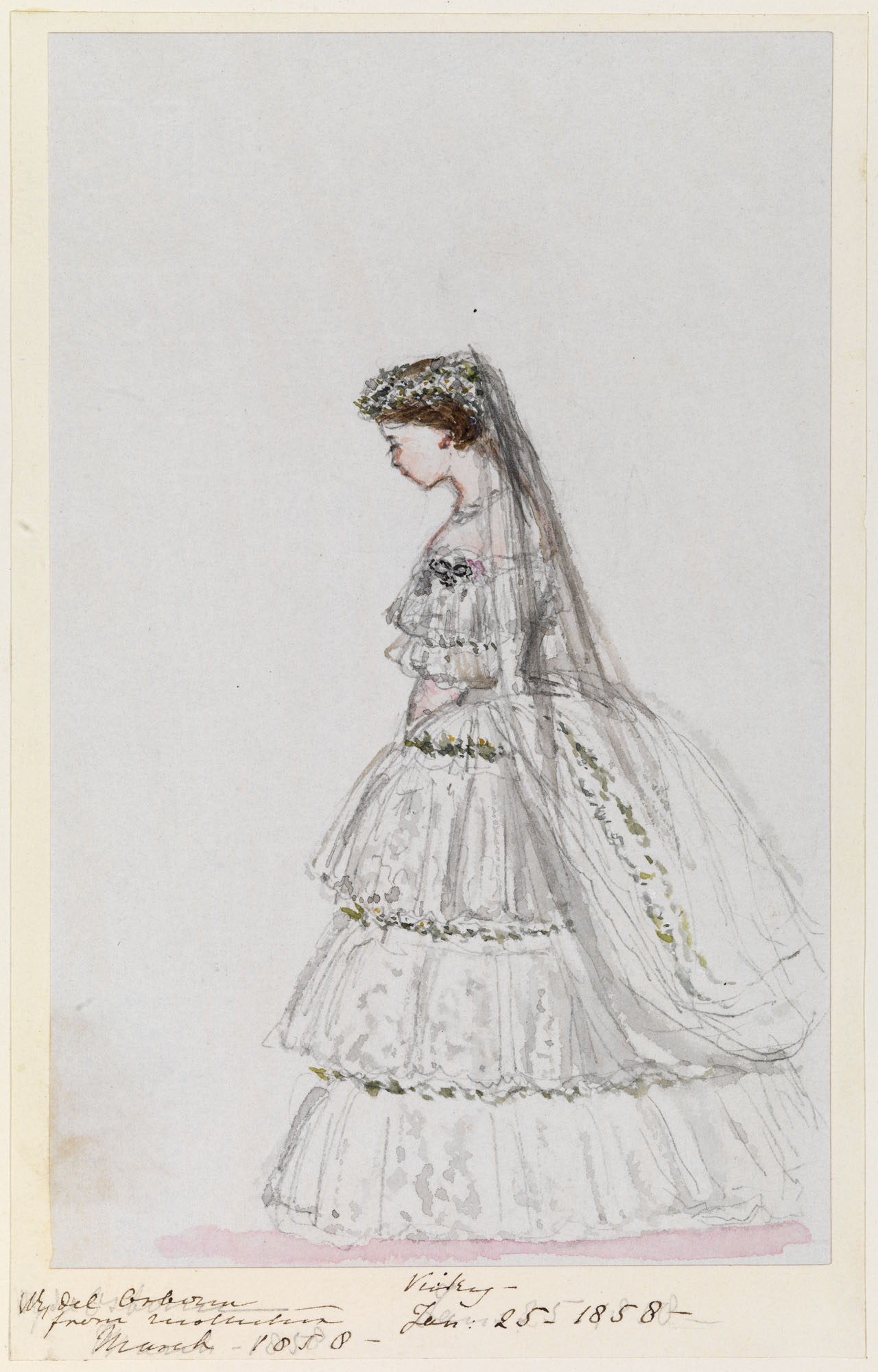 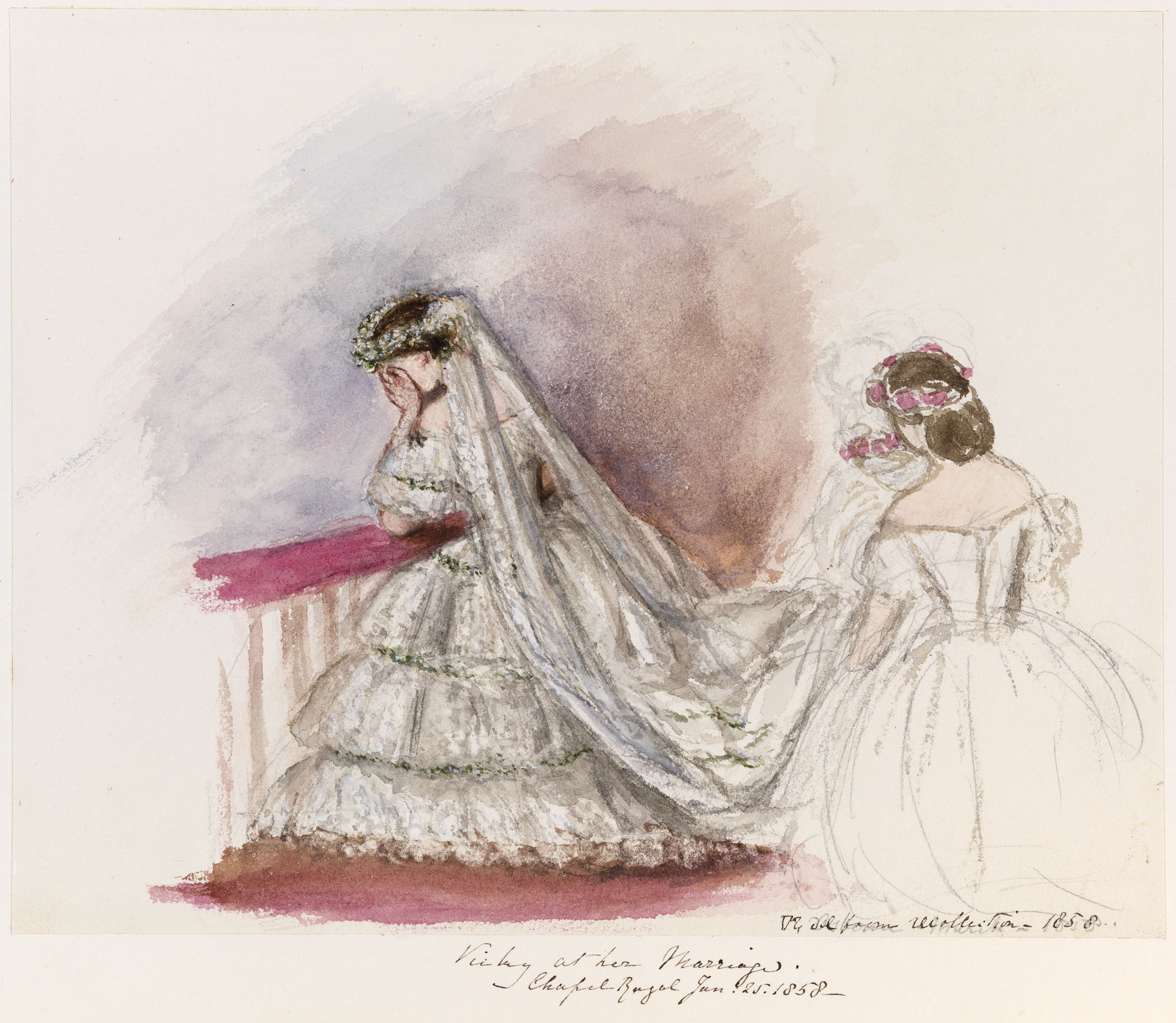 A watercolour by Queen Victoria showing Victoria, Princess Royal on her wedding day. She is shown full-length, facing left in profile. She is dressed in a wedding dress of white moire antique trimmed with three flounces of Honiton lace. At top of each flounce are wreaths of orange and myrtle blossoms which match the wreath attached to her veil.

The Princess Royal married Prince Frederick William of Prussia in the Chapel Royal at St. James’ Palace on 25 January 1858. Queen Victoria records the occasion in her journal entry of that day, describing how it was ” The 2nd most eventful day in my life, as regarded feelings, for I felt almost as if it were I that was being married over again, only much more nervous” but that “My last fear of being overcome, vanished, when I saw Vicky’s calm & composed manner“.