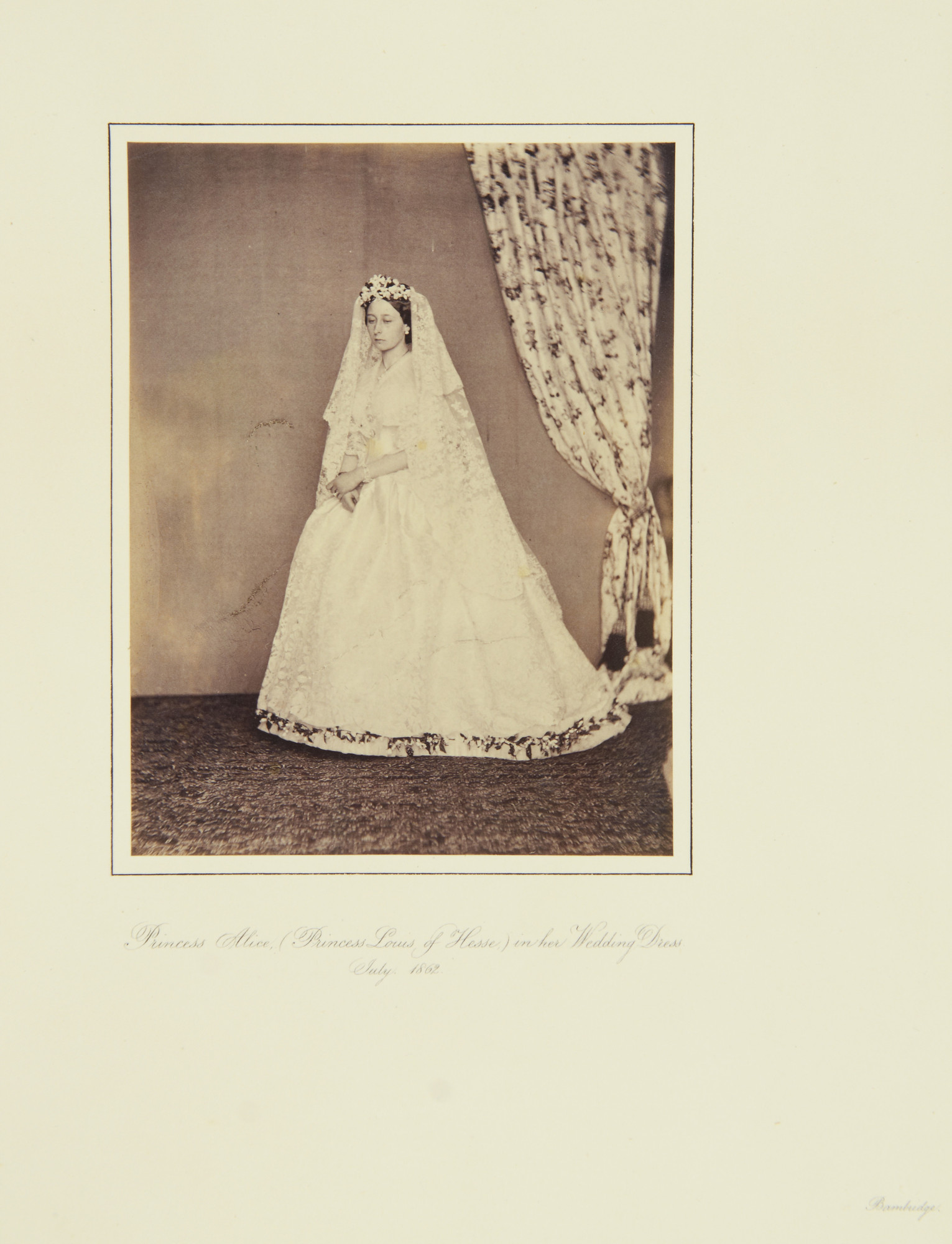 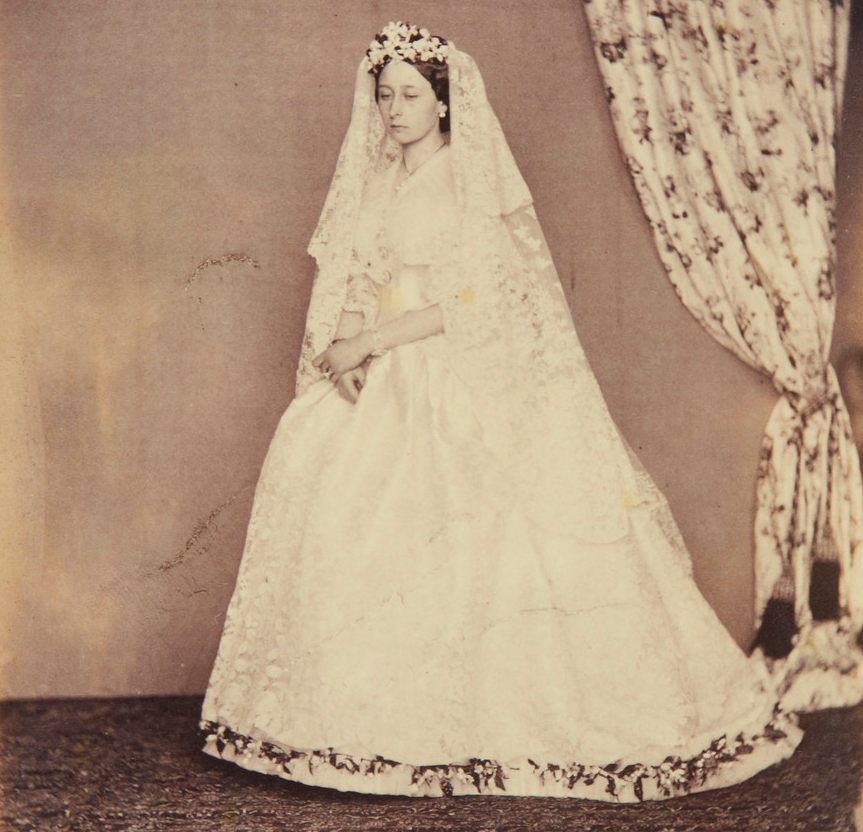 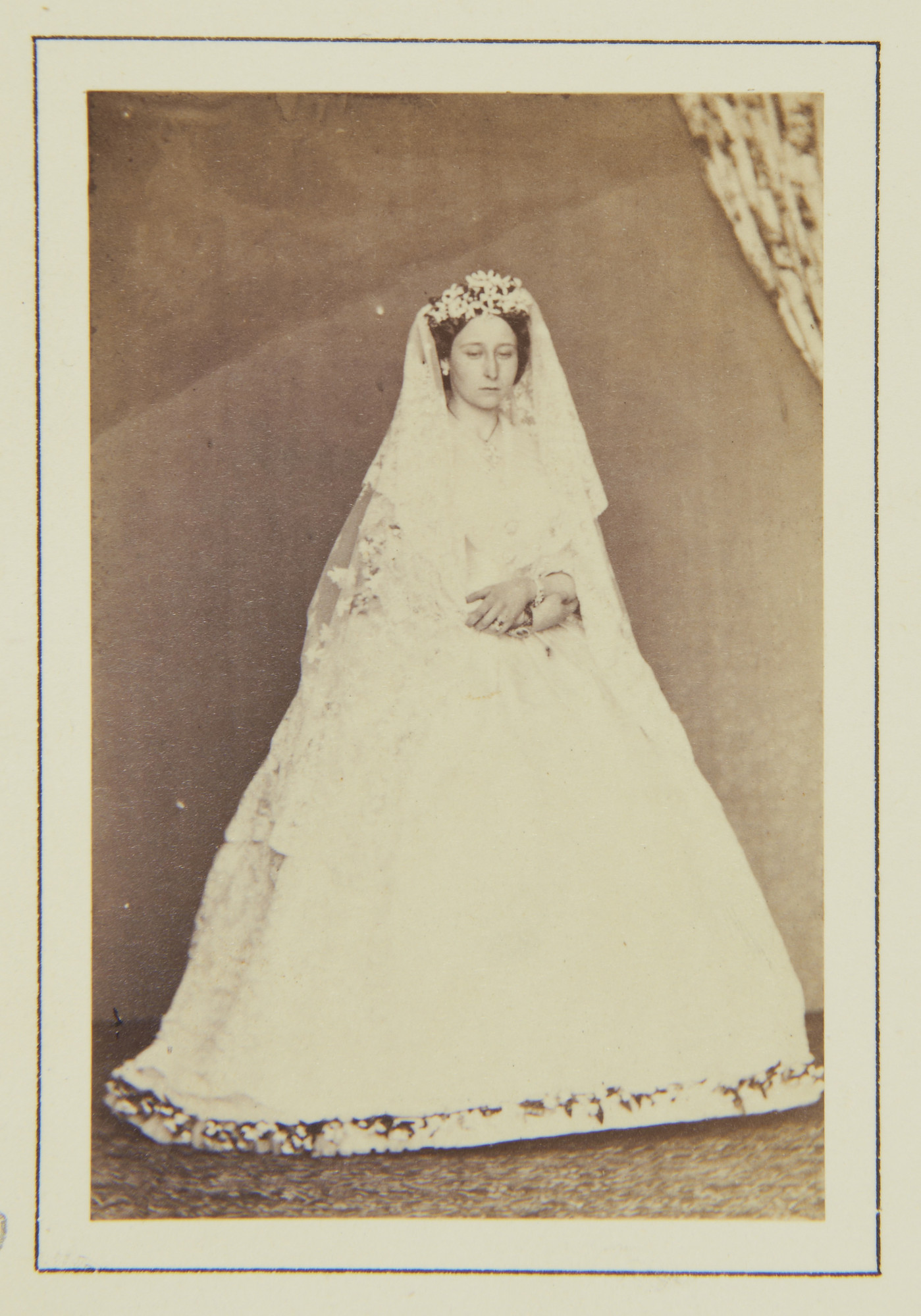 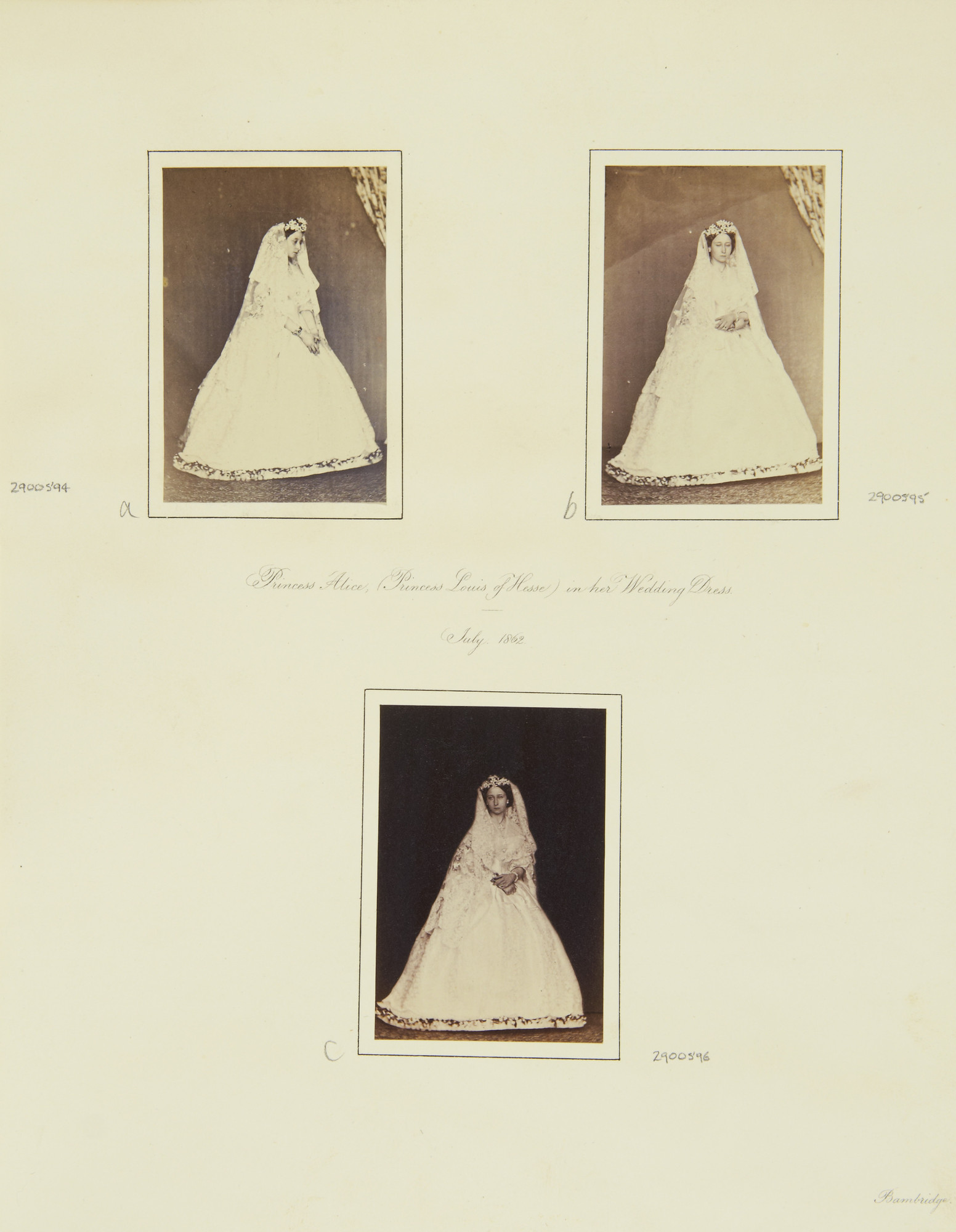 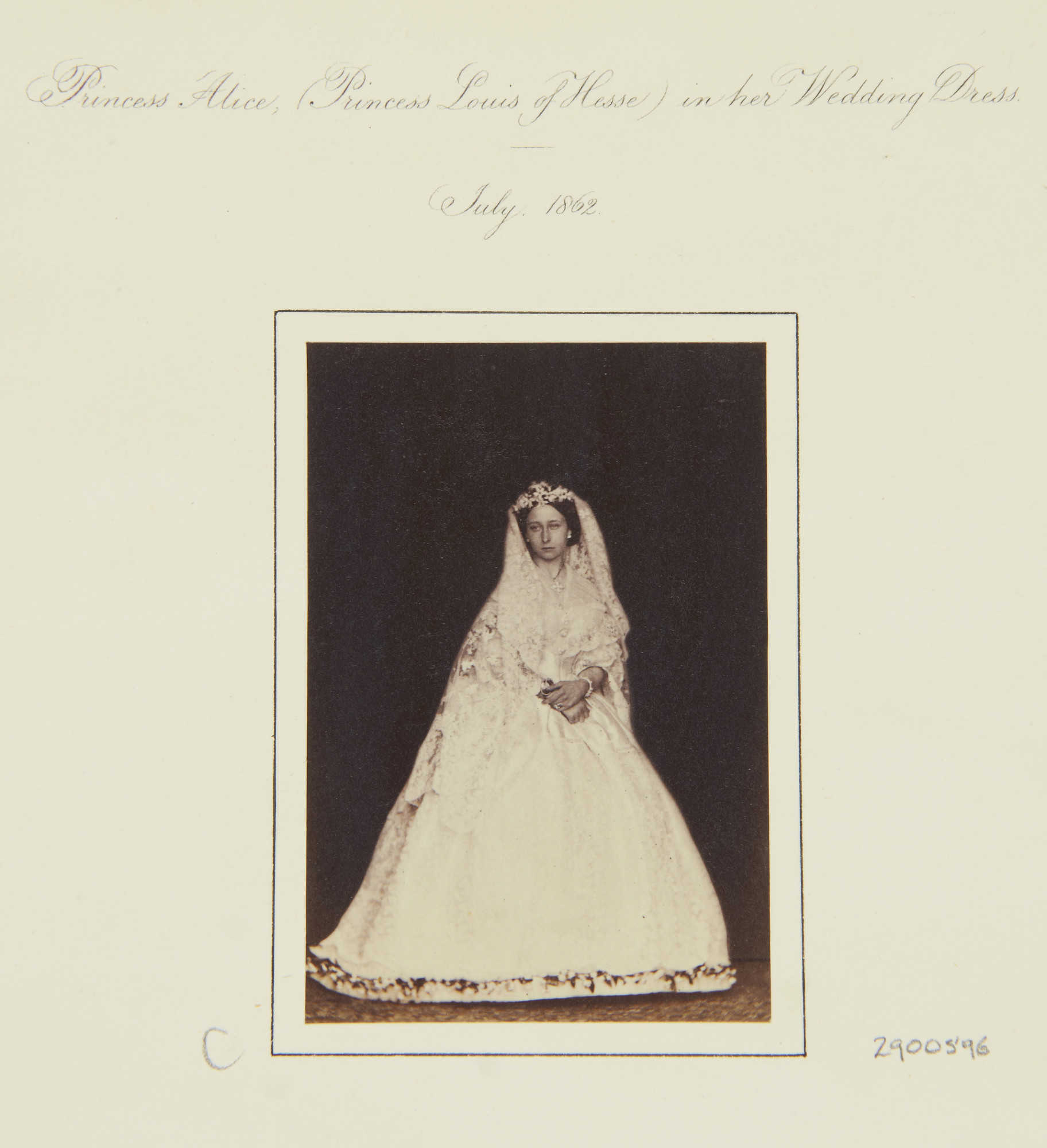 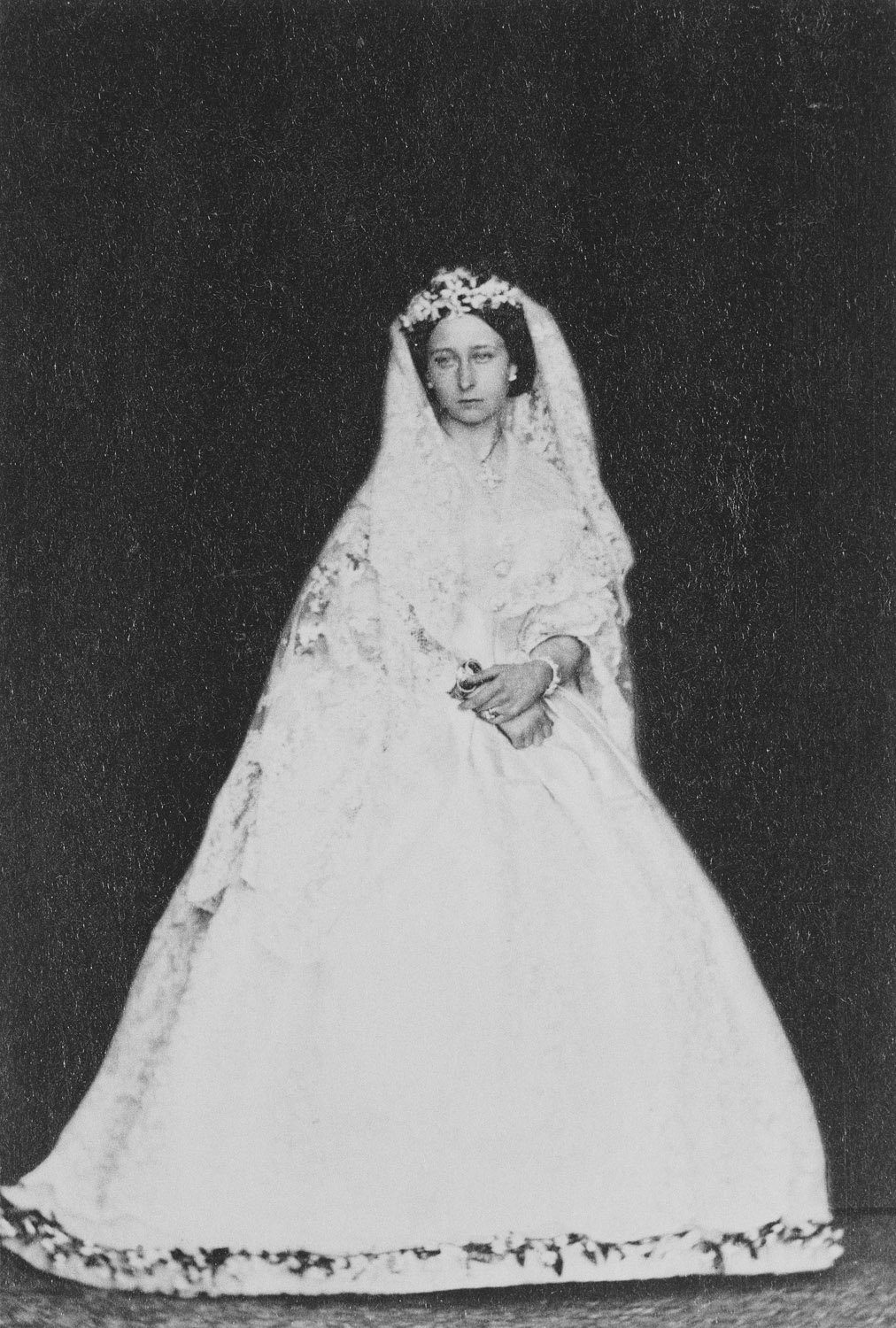 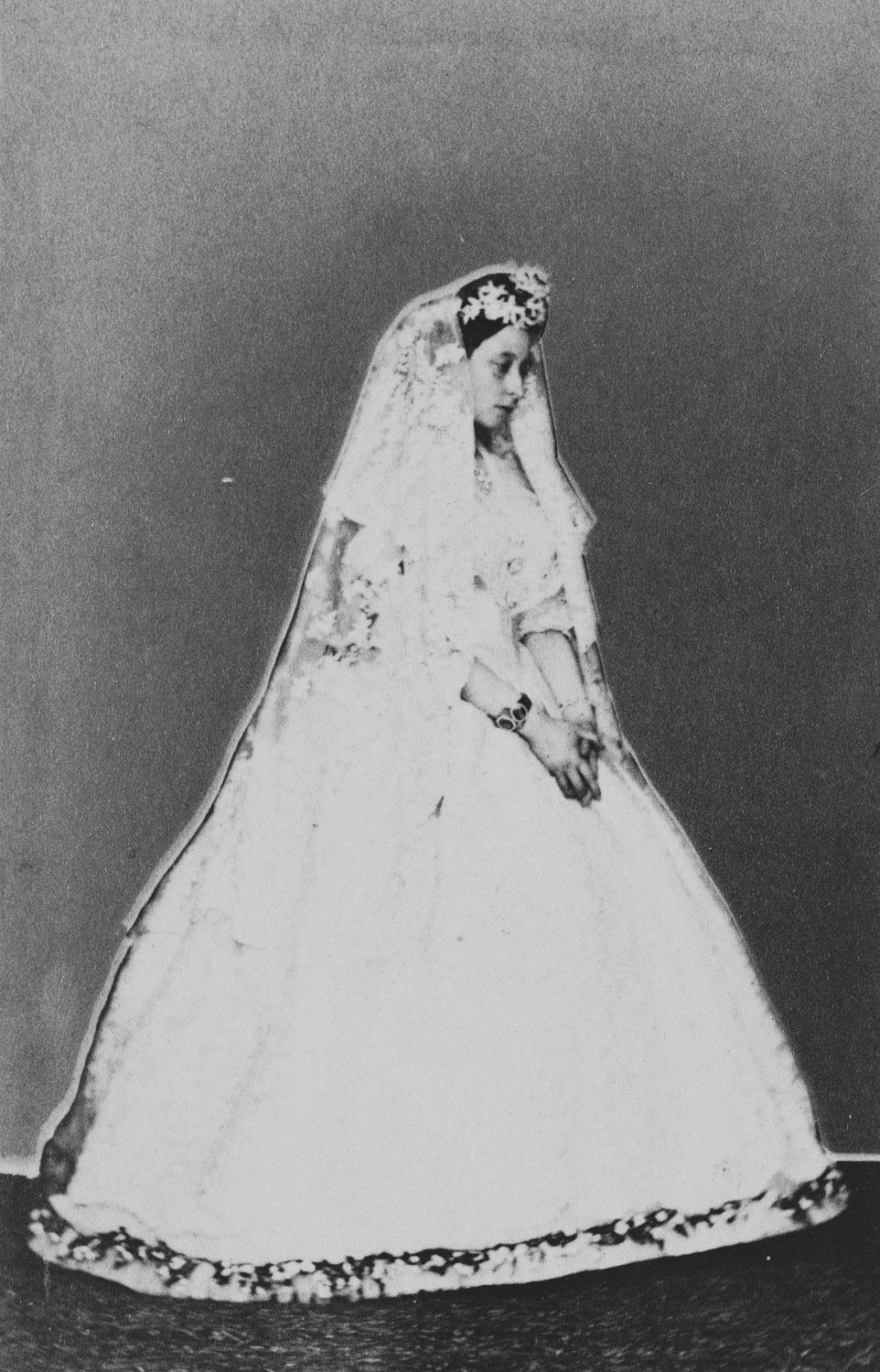 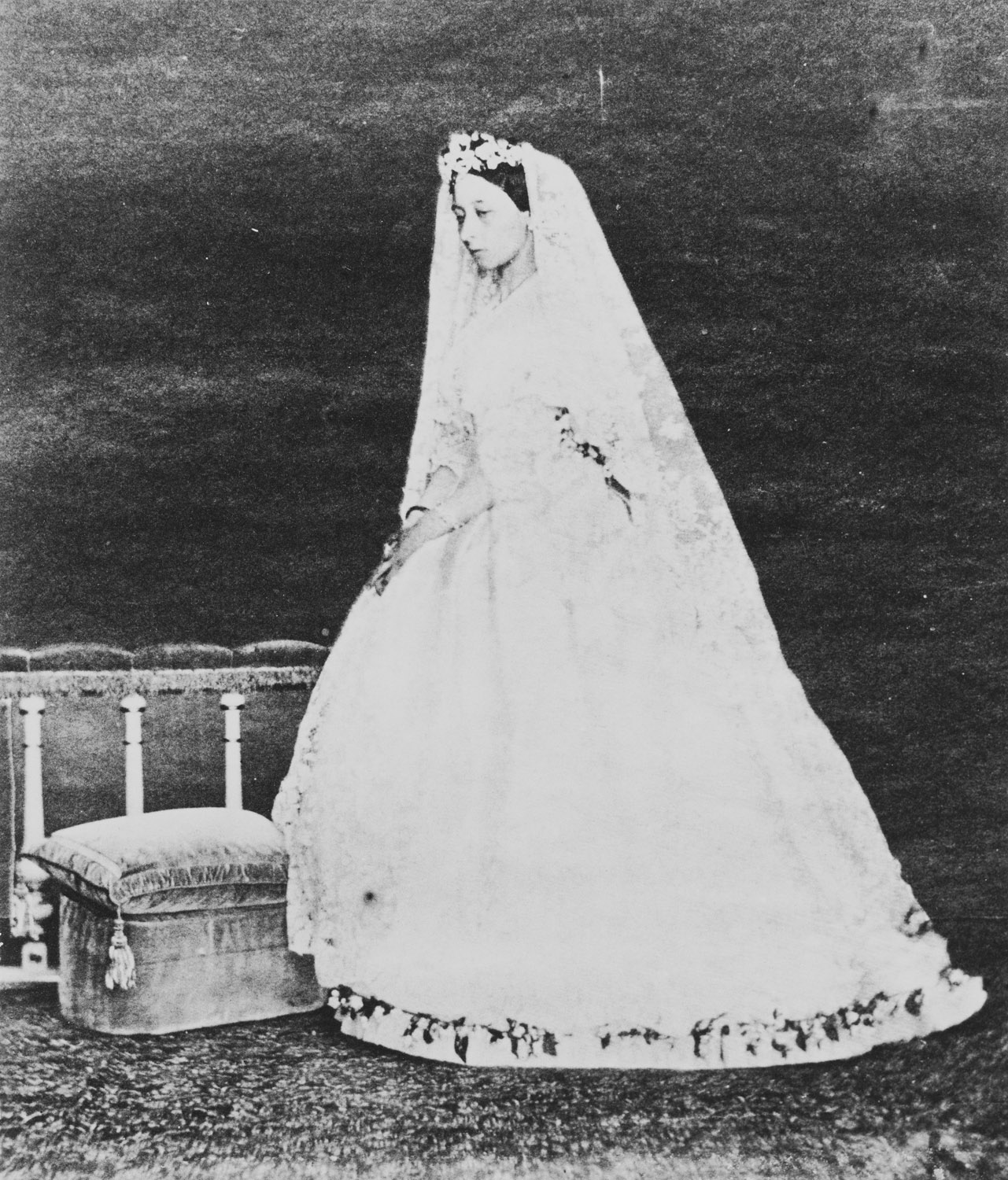 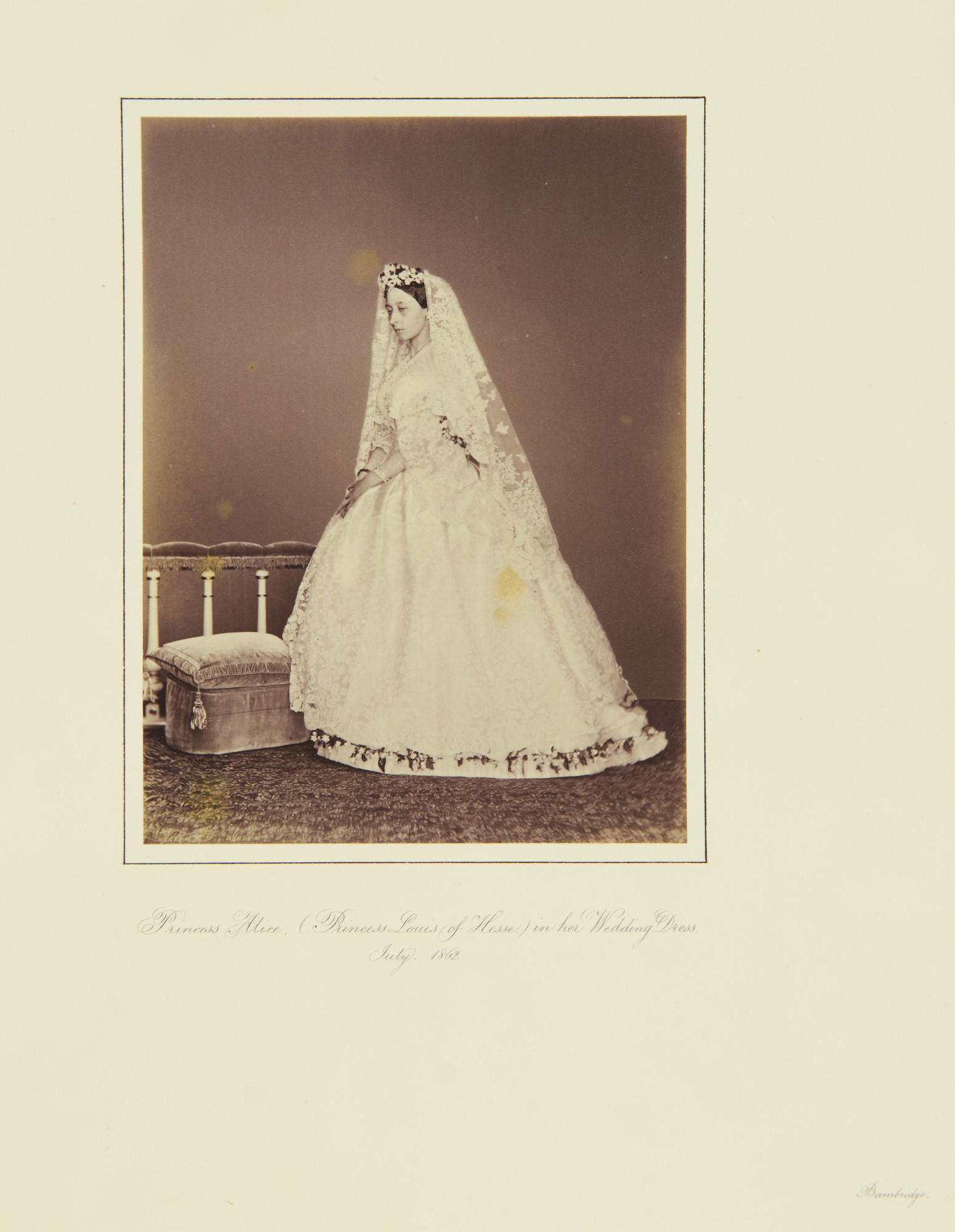 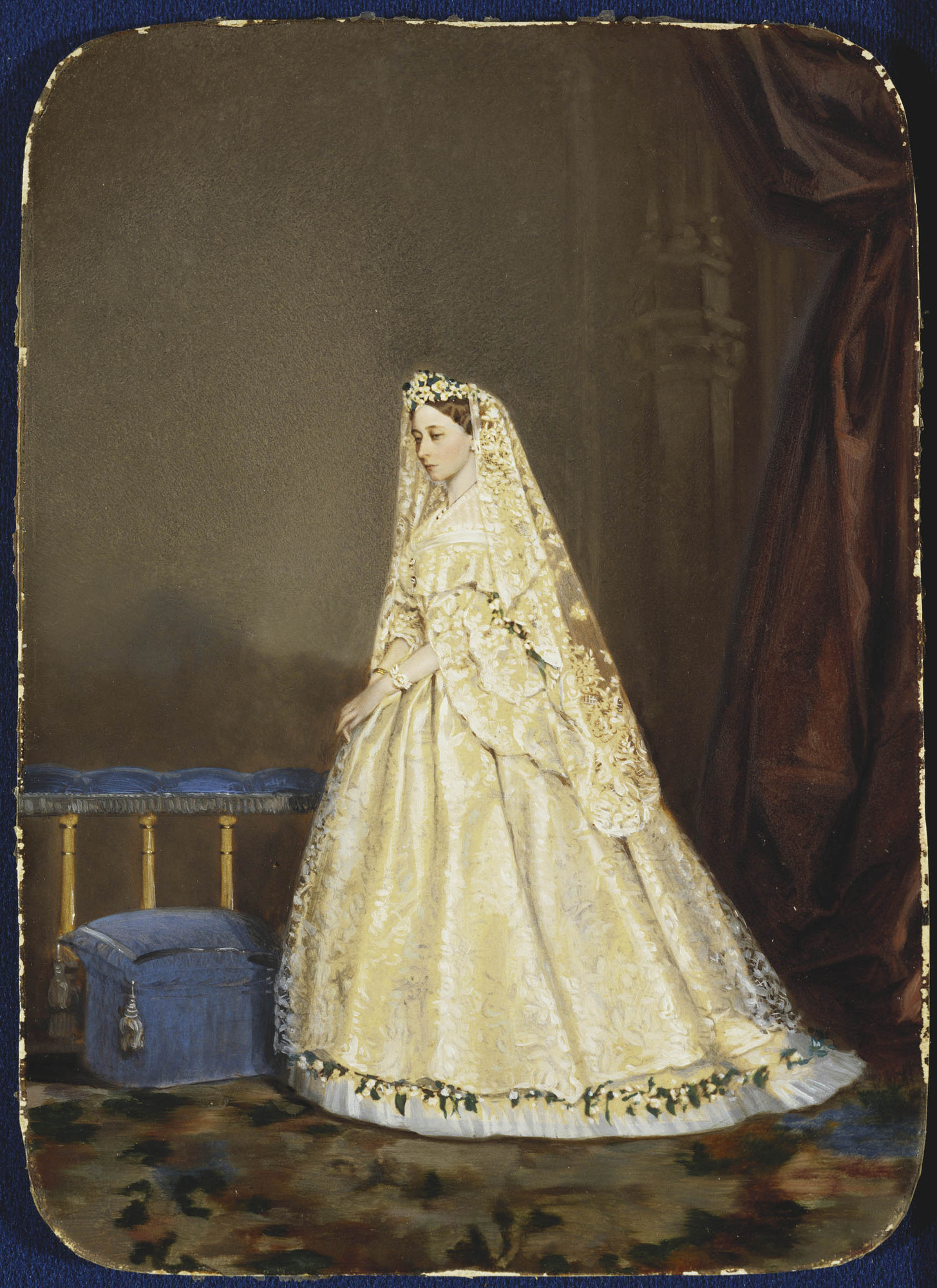 The wedding dress of Princess Alice of the United Kingdom was worn during a period of court mourning for the death of her father. Princess Alice was the second daughter of Queen Victoria and Prince Albert. On 1 July 1862, in the dining room of Osborne House on the Isle of Wight, she married Prince Louis of Hesse. Seven months had passed since the death of the Prince Consort and the Royal Family was still in deep mourning. The venue was chosen so that the Queen was able to avoid inviting the usual guests of state.

From “The Royal Wedding Dresses” by Nigel Arch and Joanna Marschner (p.58): “She wore a ‘half-high dress with a deep flounce of Honiton lace, a veil of the same and a wreath of orange blossom and myrtle’. It was a simple style and not embellished with a court train. Queen Victoria later confided to her daughter, the Princess Royal (Vicky), that the wedding of ‘poor Alice’ had been ‘more like a funeral’.” 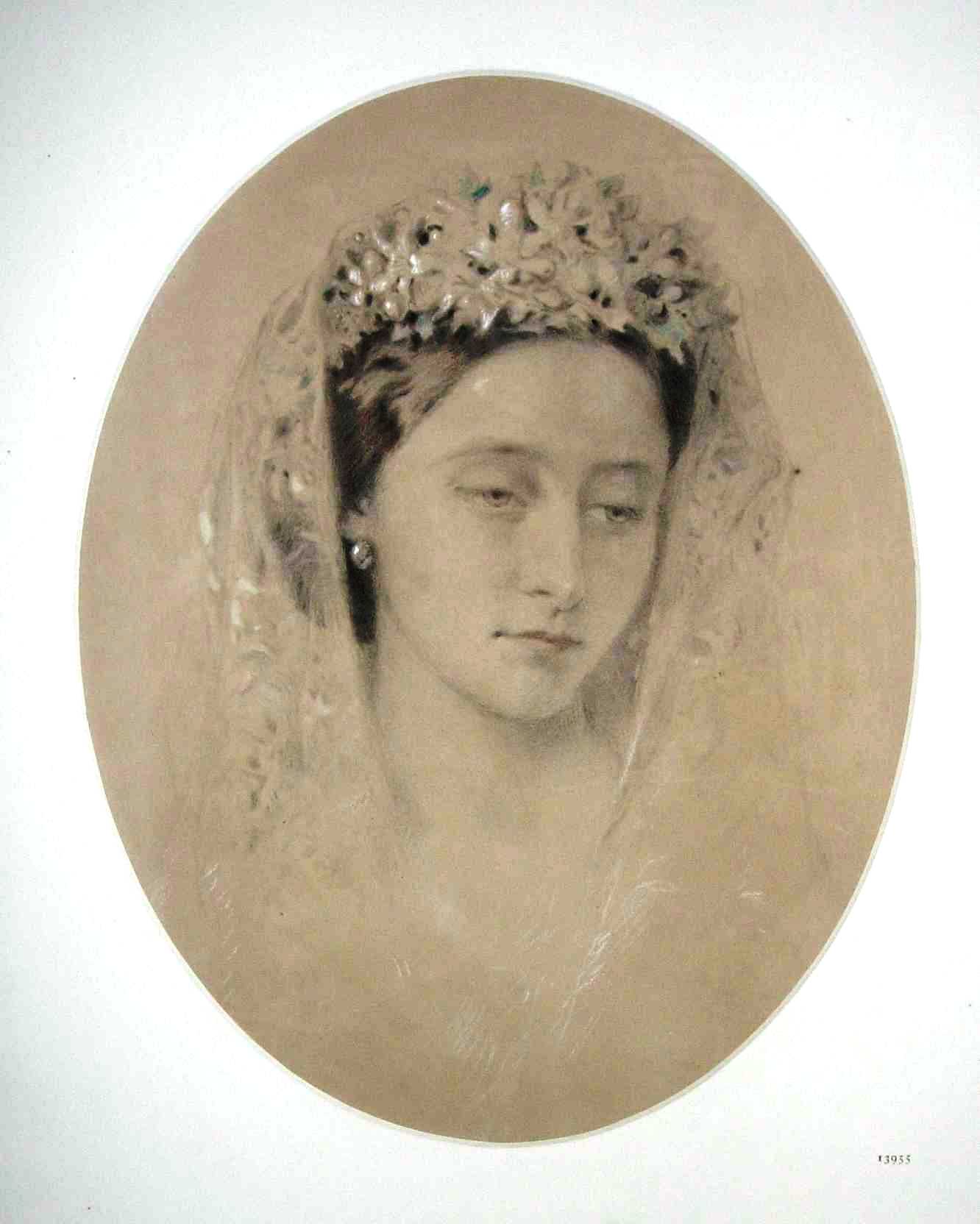 Princess Alice wearing wreath of orange blossom and myrtle and veil of Honiton Lace, which the Princess wore at her marriage on 1 July 1862, by Charles Martin 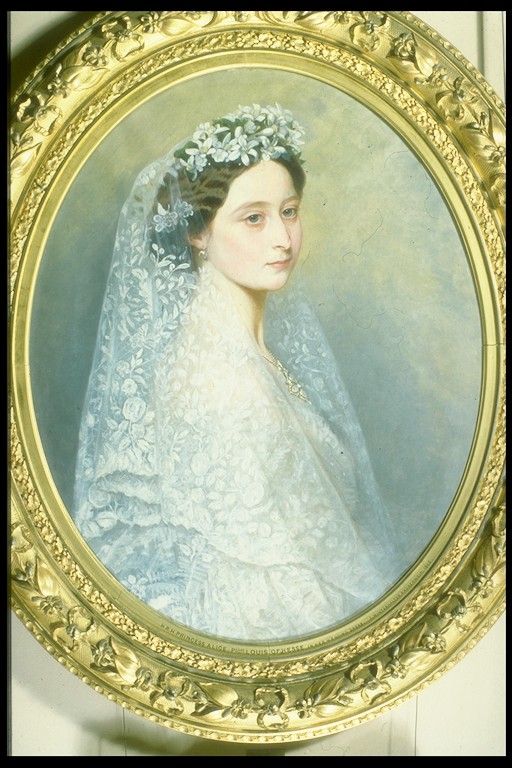 This is a copy by George Koberwein of the head and shoulders of Princess Alice in Winterhalter’s portrait of 1861, but in this painting she is wearing her wedding dress instead of a ball gown.

Alice’s matrimonial plans were begun in 1860 by her mother. Queen Victoria had expressed her wish that her children should marry for love, but this did not mean that her choice of suitors would necessarily be extended to anybody outside the royal houses of Europe. Raising a British subject to royalty, however high their rank, was politically objectionable, and also wasted any opportunity for a useful foreign alliance. The Queen instructed her daughter Princess Frederick of Prussia, recently married to Prince Frederick of Prussia, to produce a list of eligible princes in Europe. Her search produced only two suitable candidates: The Prince of Orange; and Prince Albert of Prussia, cousin to Victoria’s husband Frederick. The Prince of Orange was soon discounted. He journeyed to Windsor Castle so that Queen Victoria could look him over in person, but he proved unpalatable to Alice. The prince too showed little interest in Alice, despite strong pressure from his pro-British mother, Queen Sophie of the Netherlands. Prince Albrecht, too, was spurned, with Prince Frederick of Prussia remarking that his cousin would not do for “one who deserves the very best”.

With both of the leading candidates now discounted, Princess Victoria suggested Prince Louis of Hesse, a minor German royal, the nephew of The Grand Duke of Hesse. Princess Victoria had gone to the court of Hesse to inspect Louis’s sister, Princess Anna, as a potential bride for her brother, The Prince of Wales. Although not favourably impressed with Princess Anna, she was impressed with Louis and his brother Prince Henry. Both were invited toWindsor Castle in 1860, ostensibly so they could watch the Ascot Races in the company of the royal family, but in reality, the visit was a chance for the Queen to inspect her potential son-in-law. The Queen admired both Louis and Henry, but noted how well Louis and Alice got along together. When the Hessian family departed, Louis requested Alice’s photograph, and Alice made it clear that she was attracted to him.

Alice was engaged to Prince Louis of Hesse on 30 April 1861, following the Queen’s consent. The Queen persuaded the Prime Minister, Lord Palmerston, to vote Alice a dowry of £30,000. Although the amount was considered generous at the time, Prince Albert remarked that “she will not be able to do great things with it” in the little realm of Hesse, compared to the riches that her sister Victoria would inherit as future Queen of Prussia and German Empress. Furthermore, the couple’s future home in Darmstadt, the Grand Ducal seat, was uncertain. Although Queen Victoria expected that a new palace would be built, the people of Darmstadt did not want to meet that expense, and the resulting controversy caused resentment there. This meant that Alice was unpopular in Darmstadt before she even arrived.

Between the engagement and the wedding, Alice’s father Prince Albert died on 14 December 1861. Despite the Queen’s grief, she ordered that the wedding should continue as planned. On 1 July 1862, Alice and Louis were married privately in the dining room of Osborne House, which was converted into a temporary chapel. The Queen was ushered in by her four sons, acting as a living screen blocking her from view, and took her place in an armchair near the altar. Alice was given away by her uncle, Albert’s brother Ernest II, Duke of Saxe-Coburg and Gotha, and was flanked by four bridesmaids: her younger sisters, Princesses Helena, Louise and Beatrice, as well as Louis’s sister Princess Anna. For the ceremony, Alice wore a white dress with a veil of Honiton lace, but was required to wear black mourning clothes before and after the ceremony. The Queen, sitting in an armchair, struggled to hold back her tears, and was shielded from view by the Prince of Wales and Prince Alfred, her second son, who cried throughout the service. The weather at Osborne was dreary, with winds blowing up from the Channel. The Queen wrote to her eldest daughter, Victoria, that the ceremony was “more of a funeral than a wedding”, and remarked to Alfred, Lord Tennyson that it was “the saddest day I can remember”. Queen gave her daughter a gold, diamond and pearl bracelet, enscribed as a gift from both parents To dear Alice from her loving parents Albert and Victoria R who though visibly parted are ever united, April 25, 1863. The ceremony—described by Gerard Noel as “the saddest royal wedding in modern times” — was over by 4 pm, and the couple set off for their honeymoon at St Claire in Ryde, a house lent to them by the Vernon Harcourt family. Alice’s entourage consisted of Lady Churchill, General Seymour and Baron Westerweller (a Hessian courtier). Alice was careful not to displease the Queen after her marriage. When the Queen visited the couple at St Claire, Alice tried not to appear “too happy”. Despite this, Alice’s displays of romantic bliss made the Queen jealous of her daughter’s happiness. 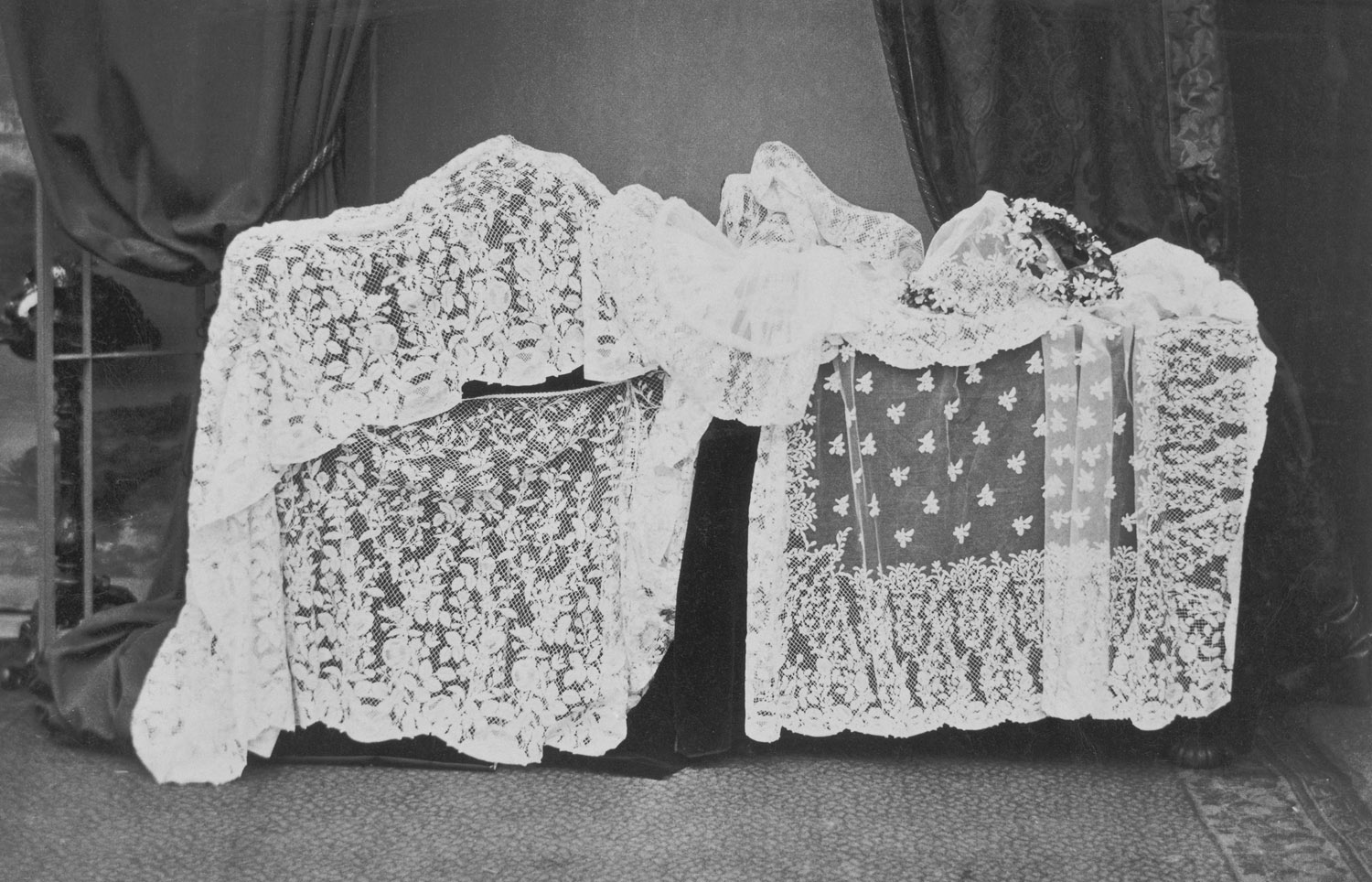 The lace, veil and wreath worn by Princess Alice in her marriage, July 1, 1862 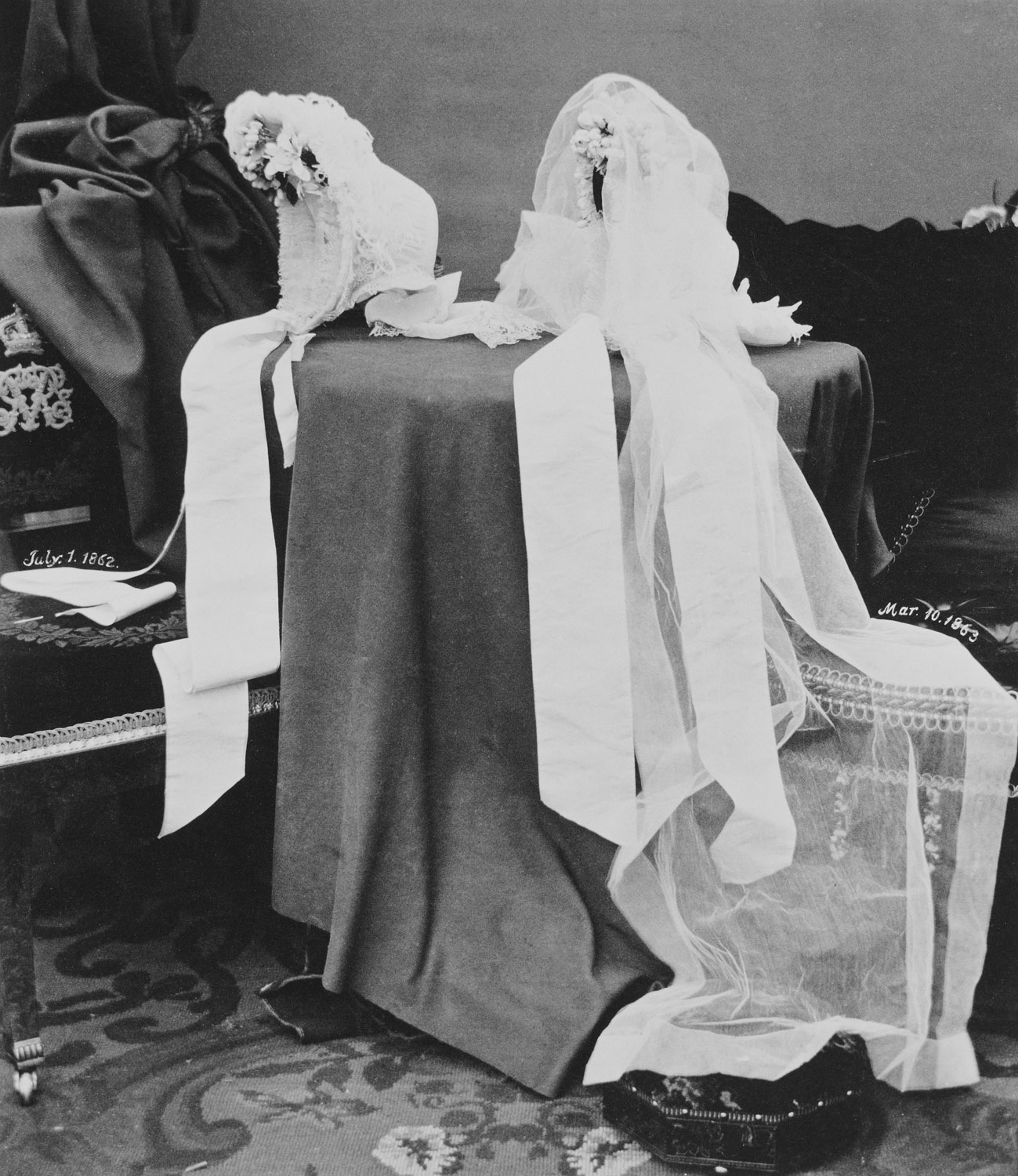 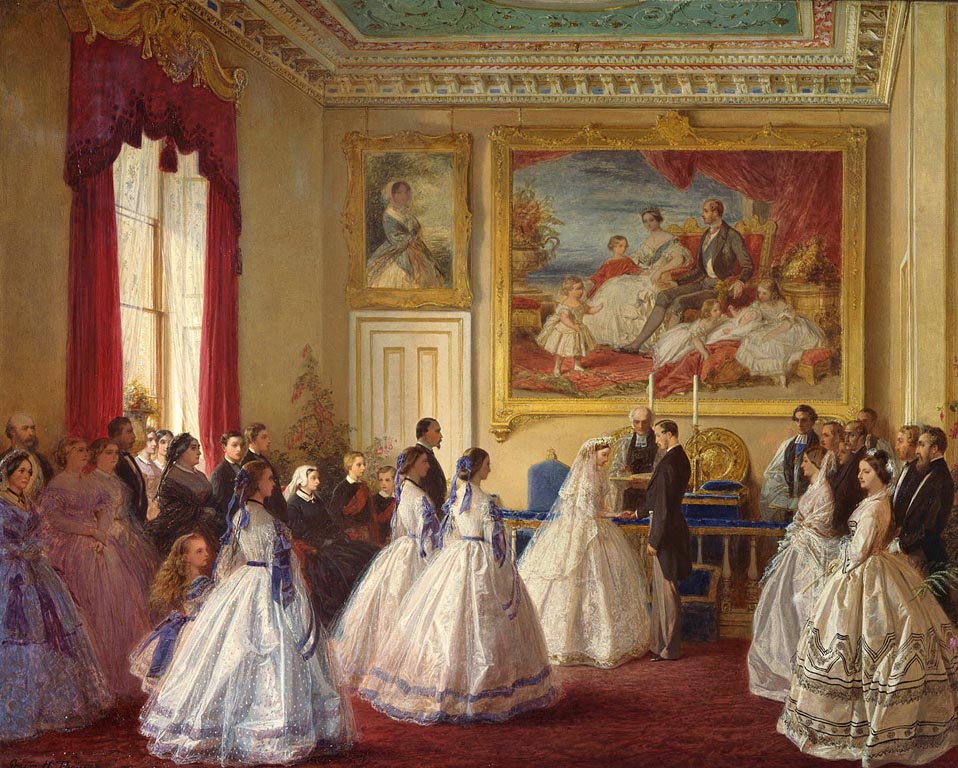 The marriage of Princess Alice, the third child of Queen Victoria and Prince Albert, and Prince Louis of Hesse took place ‘in the strictest privacy’ barely six months after the death of Prince Albert. The ceremony was held in the Dining Room at Osborne ‘which was very prettily decorated, the altar being placed under our large family picture’, as the Queen recorded in her Journal. A portrait of Victoria, Duchess of Kent, by Franz Xaver Winterhalter also hangs on the back wall in this painting. The Archbishop of York stands behind the altar and Queen Victoria sits in the light from the window, with Prince Arthur and Prince Leopold next to her. The bridegroom’s parents, Prince and Princess Charles of Hesse, stand facing Queen Victoria. The bridesmaids were Princess Alice’s sisters – Princess Louise, Princess Helena and Princess Beatrice – and Princess Anna of Hesse. The painting was exhibited at the Royal Academy in 1863. Painter: George H. Thomas.