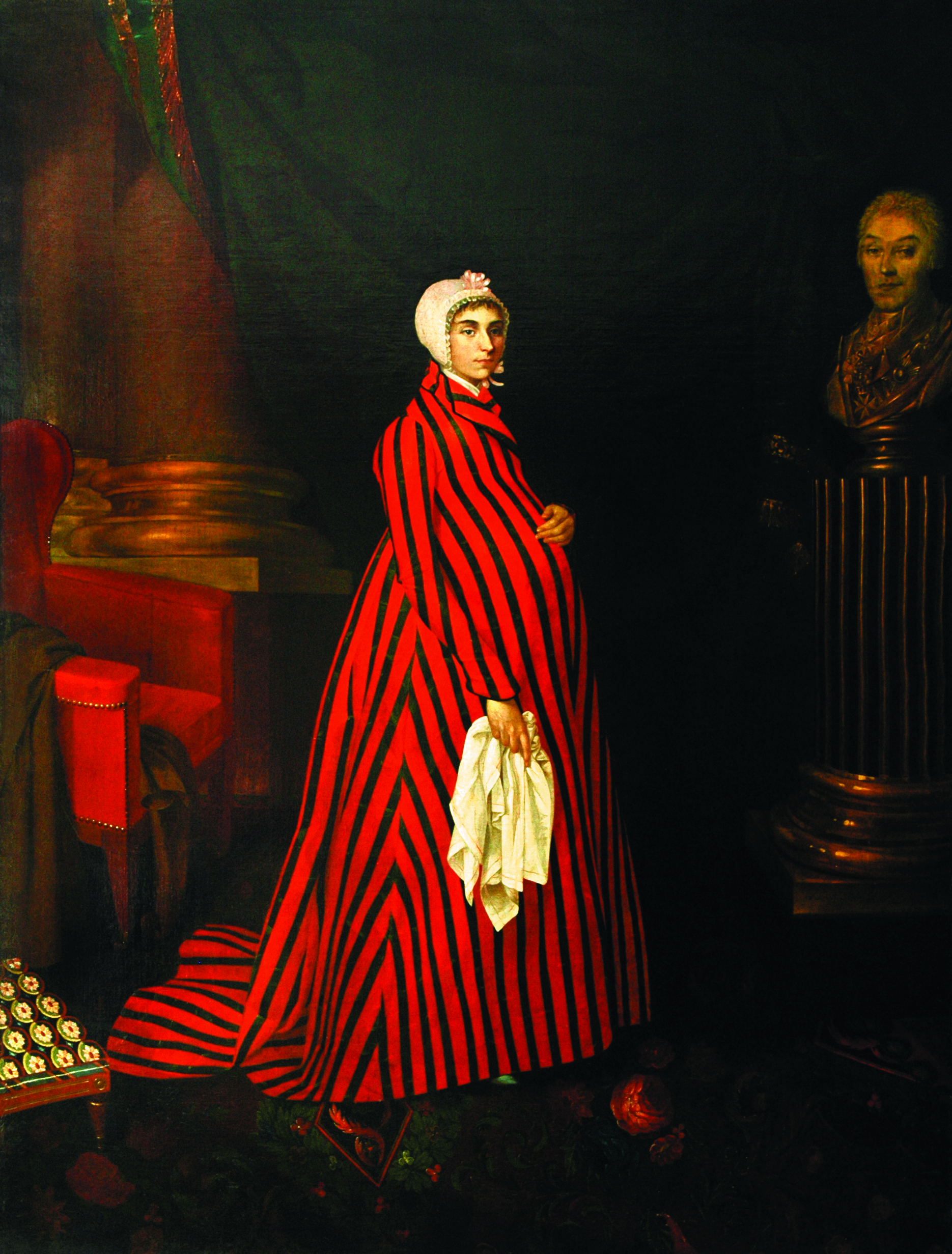 On this painting she was 35 years old and pregnant with her first and only child Dmitry who was born February 3, 1803. She died only 20 days later. How sad… There is another pregnancy portrait of her, see my other post here.

Praskovia was one of the best opera singers in eighteenth-century Russia. She was born into the family of a serf smith by the name of Ivan Gorbunov (a.k.a. Kovalyov) probably on the estate of Voshchazhnikovo in the province of Yaroslavl. Praskovia and her family belonged to the Sheremetevs, one of the richest noble families in Russia at the time. As a young girl she moved with her family to the estate of Kuskovo outside Moscow. Soon thereafter she was taken from her family to serve as a chambermaid to Princess Martha Dolgorukaya, a relative of her master, Count Pyotr Sheremetev, who lived in the manor house.

Blessed with a fine voice, Praskovia was trained to be a singer in the opera company then being put together by Count Pyotr and his son, Nikolai Sheremetev. She debuted in 1779 on the stage of the serf theatre at Kuskovo in the role of the servant Gubert in the comic opera L’Amitié à l’épreuve by André Grétry. Following her success, Praskovia was given the leading role of Belinda in Antonio Sacchini‘s opera La colonie. In this 1780 performance the actress for the first time appeared under the stage name Zhemchugova, “The Pearl”, (zhemchug means “pearl” in Russian). The other stars of the company were also given new names: Arina “The Sapphire”, Fekla “The Turquoise”, Tatyana “The Garnet”, Nikolai “The Marble”, Andrei “The Flint”, etc.

After the role of Belinda, Praskovia was promoted to the position of the first actress of the theatre. By the age of 17, she could read and write French and Italian fluently, played the harp and clavichord, and was acknowledged by her contemporaries for her operatic and dramatic abilities.

Her most important role was Eliane in Grétry’s opera Les Mariages samnites. Assuming the part for the first time in 1785, Praskovia sang Eliane for 12 years — a first in the history of serf theatre. In 1787 Praskovia sang the role of Eliane at Kuskovo for Empress Catherine II and her suite. Catherine was so impressed by her performance that she requested to meet Praskovia and later gave her a diamond ring.

In the mid-1780s, Praskovya became the mistress of Count Nikolai Sheremetev. Nikolai was the impresario of the family serf theater, and he had helped train Praskovia over the years, eventually falling in love with the young star of the troupe. The circumstances surrounding the early years of their relationship, like so much of Praskovia’s life, are unknown. After the death of Nikolai’s father in 1788, Nikolai and Praskovia set up a private household in a secluded corner of the Kuskovo estate. Their unorthodox relationship soon became the subject of gossip among aristocratic society.

In 1795 Praskovia, Nikolai, and the theatre troupe moved from Kuskovo to Ostankino, a brilliant new palace constructed north of Moscow with a large theatre intended for large-scale operas and immense balls. The year 1795 was marked by the premiere of the opera Zelmira and Smeloy, or the Capture of Izmail (Osip Kozlovsky, text by Pavel Potemkin); Praskovia acted in the role of the captive Turkish woman Zelmira). Praskovia performed here for Stanisław August Poniatowski, the last king of Poland.

At the height of the theatre’s flowering in the late 1790s Praskovia became ill, possibly with consumption (tuberculosis), and was forced to retire. In late 1796, Nikolai was appointed to the court of Paul I and Praskovia moved with him to St. Petersburg.

Although they lived as man and wife, Nikolai and Praskovia had to keep the nature of their relationship secret from polite society. It was taboo for an aristocrat like Sheremetev to move about in society with a serf as his social equal. Finally, in 1798 Sheremetev emancipated Praskova and later the entire Kovalyov family from serfdom. Understanding that her health would not allow her to return to the stage, he closed the theatre.

In 1801 Nikolai and Praskovia married in Moscow in the strictest secrecy. As part of the arrangements, Nikolai had created a phony genealogy for Praskovia claiming that she was the long-lost descendant of a Polish nobleman by the name of Kovalevskii. Around the time of the wedding he sent a forger to Poland with a purse full of money to purchase a patent of nobility from a willing noble family.

Within months of their wedding Praskovia became pregnant. On February 3, 1803 she gave birth to a son, Dmitry, but pregnancy and childbirth destroyed her poor health and she died on February 23 at the Sheremetev palace in St. Petersburg. Just before she died Nikolai informed Emperor Alexander I of his marriage and requested official recognition, which he granted. News of the marriage scandalized society and angered Nikolai’s family. Nikolai’s two nephews, the Razumovsky brothers, had planned to inherit their uncle’s vast fortune, and upon hearing that they were to lose it all to the son of a serf they contemplated murdering the infant.

Praskovia was buried in an elaborate ceremony at the Alexander Nevsky Monastery attended by clergy and servants from the Sheremetev household. Nikolai was too overcome with grief to attend, and the nobility stayed away to signal its disapproval of Nikolai’s marriage.

In memory of Praskovia Nikolai built in Moscow on Sukharevskaya square, a large almshouse that tended to the sick, poor, and orphaned up until the revolution of 1917. Under the Soviets the almshouse was shut down and replaced by a scientific research institute named after N. Sklifosovsky.