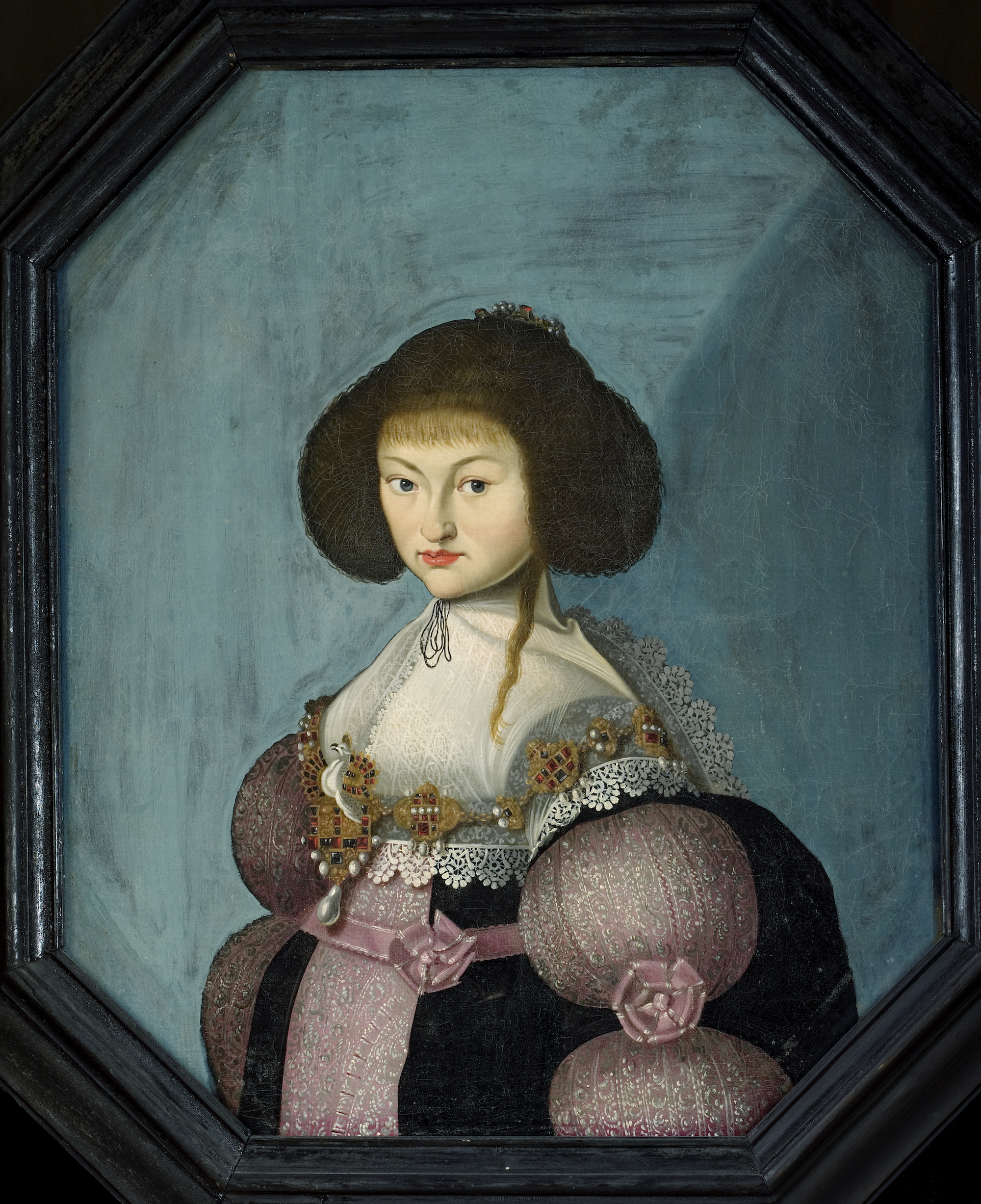 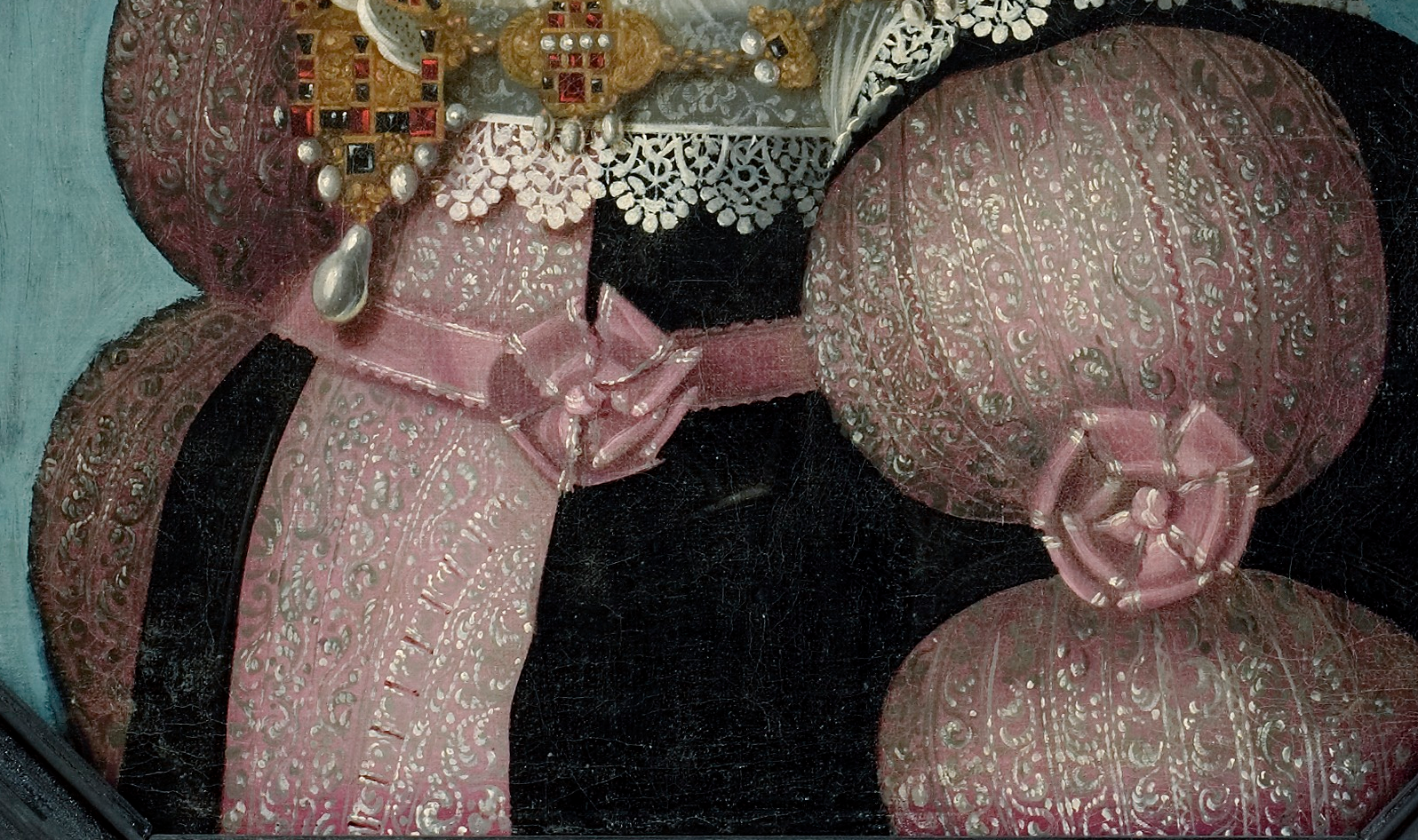 As far as I can see the Skokloster Castle museum website as well as the Wikicommons website do not give an exact date of this painting. Based on the costume, which seems like maternity wear to me, my guess is that this painting is from the 1650s, the years in which she bore her three children. Although she must have been in her late thirties then, and the person on this painting looks more like a young woman or girl. Maybe it was an idealized painting? She really does appear to be very pregnant in my eyes – or was that just part of the fashion of those days?

Because then there is this painting, hanging in the Rosenborg Castle in Copenhagen (unfortunately I found only this low-res version), dipicting Magdalene in a very similar attire, but dated 1634: 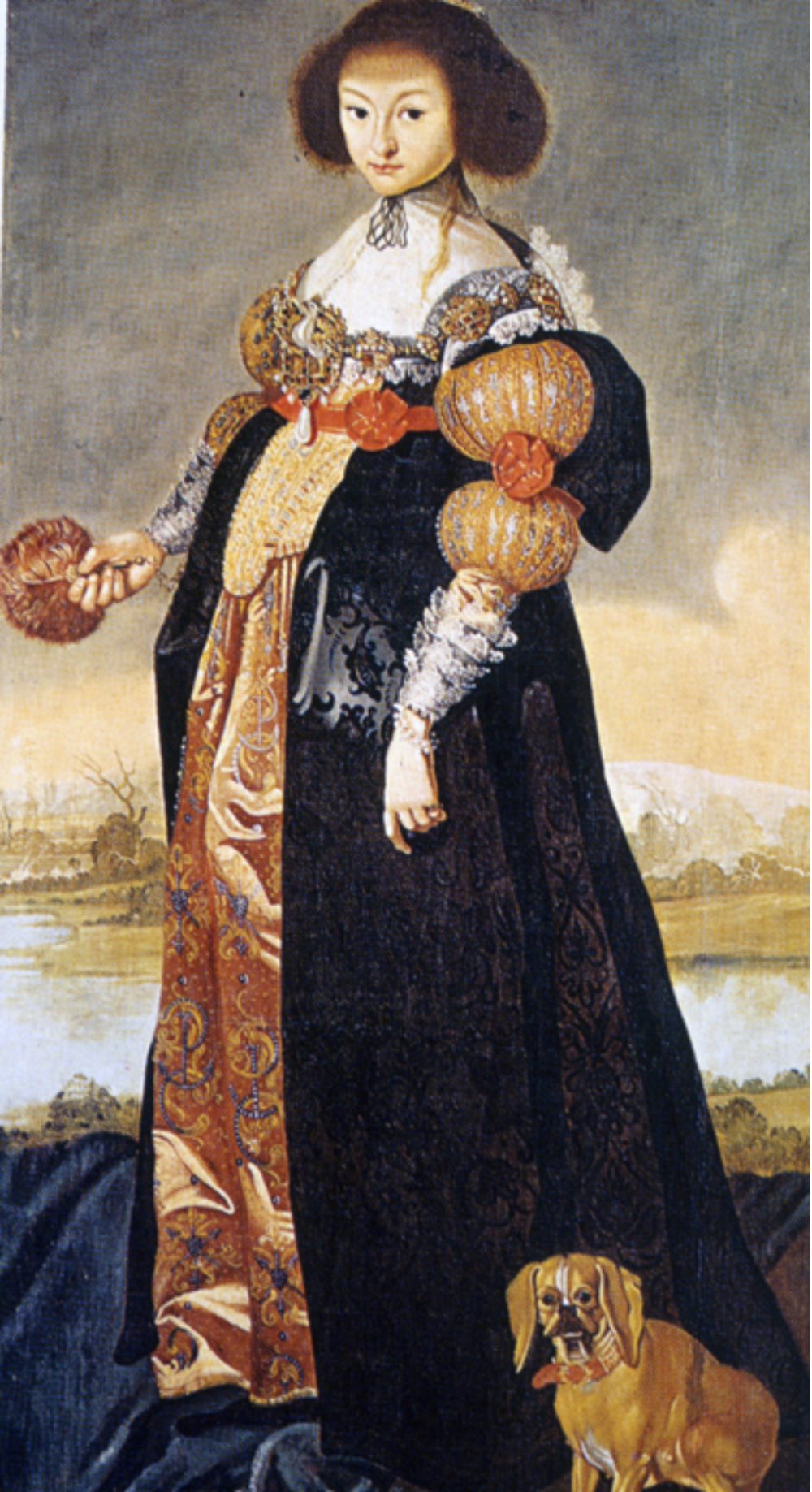 Magdalene Sibylle was born in Dresden, the third surviving daughter and sixth surviving child of John George I, Elector of Saxony, and Magdalene Sibylle of Prussia. Her five elder siblings were Sophia Eleonore, Marie Elisabeth, Johann Georg, August, and Christian; her only younger sibling was Maurice. Magdalene Sibylle of Saxony (23 December 1617 – 6 January 1668) was the Princess of Denmark from 1634 to 1647 as the wife of Prince-Elect Christian of Denmark, and the Duchess consort of Saxe-Altenburg as the wife of Duke Frederick Wilhelm II.

She was engaged in 1633 and married in 1634 to Christian of Denmark, who had been elected Prince of Denmark (heir apparent, Denmark being an elective rather than a hereditary monarchy). The wedding took place on 5 October 1634 in Copenhagen with grand festivities. Known in Denmark as Det store bilager (“The great wedding”), the wedding exemplified the great pomp and luxury of the Baroque era. The first ballet ever produced in Denmark was performed for the occasion.

The couple resided at Nykøbing Castle in Falster. Magdalene Sibylle lived discreetly as princess. She made donations to churches and clergymen, and received praise for doing so. She also wrote a prayerbook. Her husband died during a trip to Saxony, which she was accompanying him on, and the marriage ended childless. Eventually her brother-in-law ascended the throne as Frederick III.

When she became a widow, in 1647, she was granted Lolland-Falster as her fief and the position of royal sheriff of Nykøbing county with the two shires of Falster and the county of Ålholm. She had specifically asked for these fiefs. She withdrew to her dower estates in the south of Denmark.

In 1651 she was engaged to Duke Frederick Wilhelm II of Saxe-Altenburg, and on 11 October 1652, she married him in Dresden. The next year, 1653, she lost her lands and offices in Denmark.

She had three children with her second husband:

She visited Denmark in 1662 for the engagement of Princess Anne Sophie of Denmark to John George III, Elector of Saxony. Upon her death, she was said to have been a loyal Dane until the day she died, 6 January 1668. She died in Altenburg.