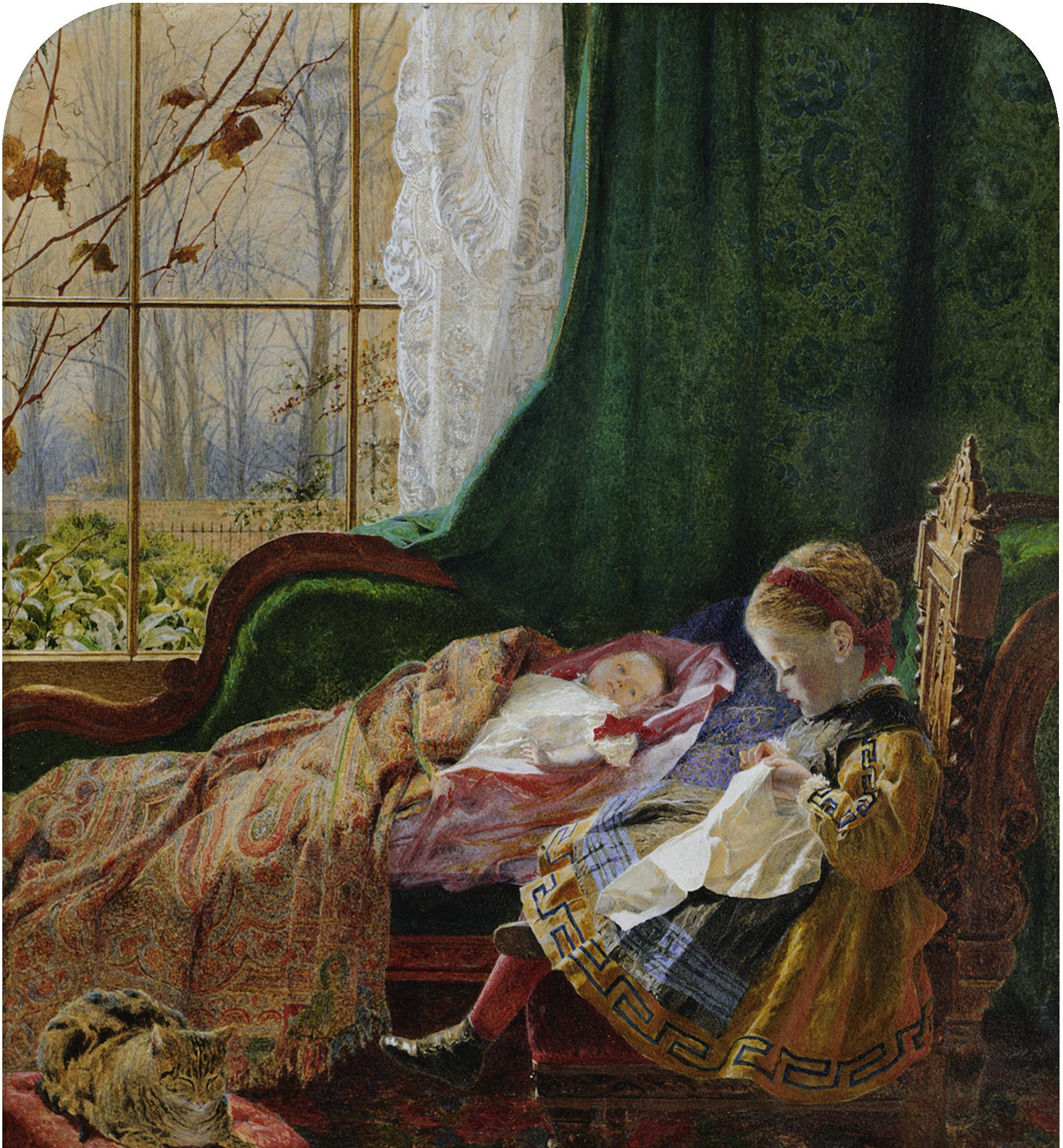 Charles James Lewis is best known as a painter of landscape and rustic figure subjects, with a particular penchant for angling scenes. On this occasion, however, he has treated a sweet domestic subject, showing a baby lying on a day-bed wrapped in a brightly coloured shawl and looking towards his or her sister – a child of three or four years – who sits on an upright chair and who is at work on a piece of embroidery. In the right foreground is a sleeping cat, while the background of the composition consists of a green curtain and lace blind, and a casement window through which a wintry landscape of garden and leafless trees is seen.

Whether conceived as a charming genre subject, or representing children of his own, or those of a friend or family member, Lewis conveys a sense of truthfulness and authenticity to the subject. The Victorians were fascinated by the condition of childhood, and many books, from Charles Dickens’s David Copperfield (1849-50), to Lewis Carroll’s Alice in Wonderland(1865) and Alice through the Looking-glass (1871), as well as countless paintings and photographs, attempted to convey the delights and anxieties of children, as well as the physical appearance of boys and girls of different social backgrounds. Lewis’s success with this watercolour is to represent siblings without artifice or injected charm, but in a way that is absolutely convincing.

Lewis was born in London and lived there all his life, latterly in a house in Cheyne Walk, Chelsea. Nothing is known of his artistic training, but at a young age – in 1847 – he commenced as an exhibitor at the Royal Academy, showing a female portrait. He received an entry in the Dictionary of National Biography in the year of his death, where it was stated that his works were an admired feature of the principal London exhibition spaces and that he was an ‘industrious, rapid, and prolific artist’.

In 1869 the Art Journal published a commentary on a subject of Lewis’s entitled The Mill-door (private collection), depicting two children of different ages, in a way loosely analogous to the present watercolour. The critic was ‘pleased to meet, as in this case, with something that breaks the monotony of what is ordinarily set before us in our exhibition-rooms. Both in the subject and the treatment we have an attractive work’. Of the children it was said that they gave ‘animation to the scene, while they do not appear forced in for the sake of effect; they express only a domestic incident natural enough in their daily life’ (Art Journal, 1869, p. 244).