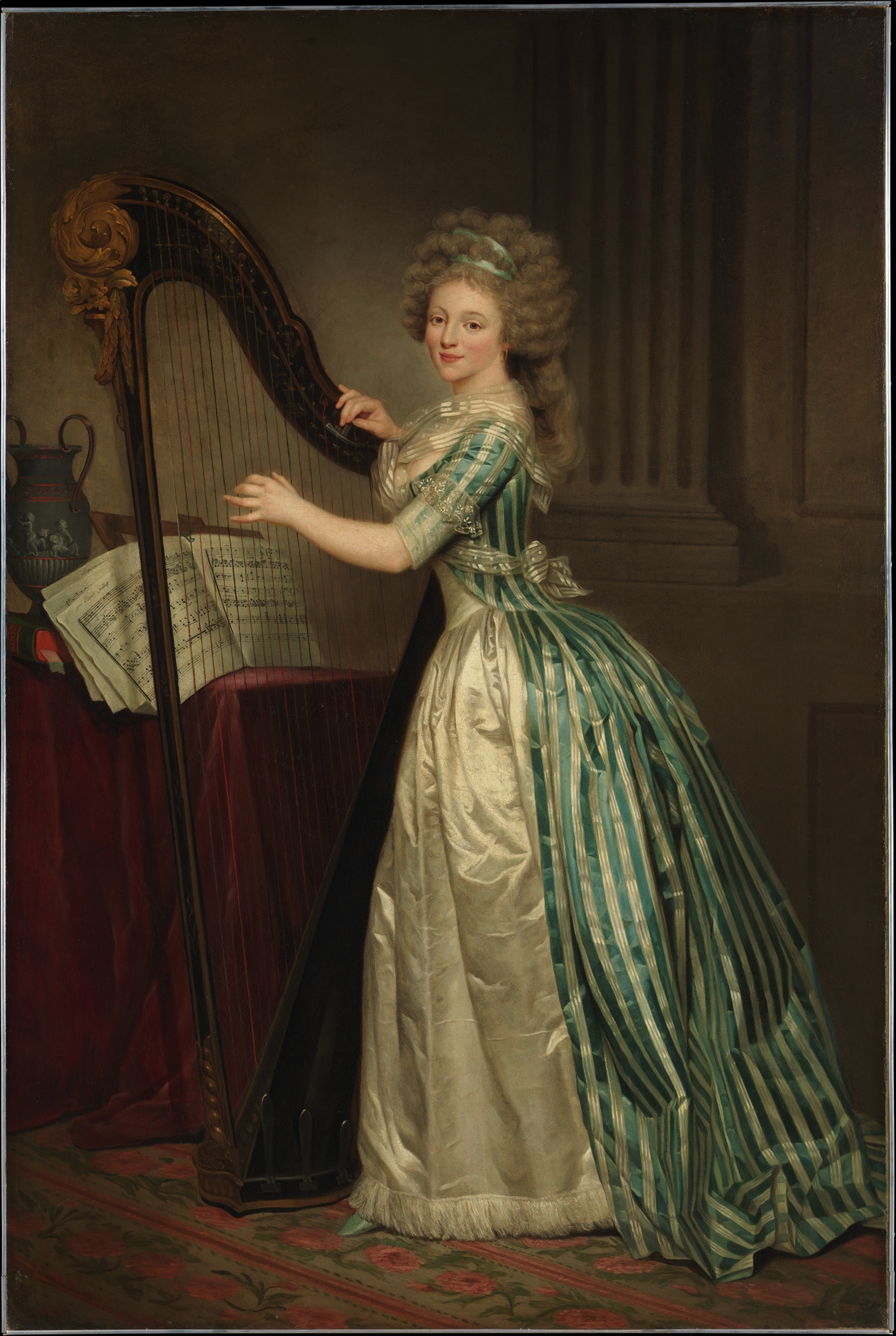 Self-Portrait with a Harp by Rose Adélaïde Ducreux, 1791

This work has been identified with a self-portrait that Mademoiselle Ducreux exhibited at the Paris Salon of 1791. The sitter’s graceful pose and the sumptuous fabrics were admired by contemporary critics.

Although harps were popular accessories for portraits in this period, Rose Adélaïde Ducreux really was both a talented artist and a gifted musician. She was the daughter of Joseph Ducreux (1735–1802), principal portraitist to Marie Antoinette (1755–1793), who had traveled to the Queen’s native Vienna to paint her in 1769. Rose Adélaïde Ducreux’s first exhibited work, at the Salon de Correspondance in 1785, was a self-portrait in which she showed herself painting (location unknown); in her self-portraits she customarily includes attributes of art and music. Since they were not members of the Académie Royale de Peinture et de Sculpture, both Joseph Ducreux and his daughter were excluded from the official Salon until 1791, when the doors were opened to all. In 1791 she exhibited two portraits, including this one; she showed six more portraits there between 1793 and 1799.

Ducreux never signed her work. The few paintings by her that have now been identified had been confused with those of other artists such as Antoine Vestier (1740–1824) and Élisabeth Vigée Le Brun (1755–1842). This composition, however, exactly matches the description of her life-size self-portrait playing the harp, exhibited in 1791; the floral carpet recurs in another portrait of a young woman by Ducreux (private collection). On the table sit a Neoclassical vase, a book whose spine is inscribed “Opera”, and her music, a song by the harpist and composer Jean Joseph Benoît Pollet (1753–1823). She holds a tuning fork in her right hand.

In 1802 Ducreux left Paris for the French colony of Santo Domingo, as she was engaged to the maritime prefect of the island, François Lequoy de Montgiraud (1748–1804). They married, but shortly thereafter she died of yellow fever. Her father, from whom she had previously been inseparable, died two days later.

Ducreux exhibited this self-portrait at the 1791 Salon. She depicts herself testing the tuning of a contemporary single-action harp. A book of sheet music, pictured on the table at left, is open to a song honoring “tender love.” By portraying her musical talents along with her considerable painting skills, Ducreux presents herself as an exemplar of feminine refinement, able to shift gracefully between art and music. This painting, previously attributed to Antoine Vestier (1740–1824) and to Élisabeth Vigée Le Brun (1755–1842), is the finest known example of her work.

On the website The Fasthion Historian you can read a very interesting and in-depth review of this painting. Here is an extract of what she writes about the dress on the painting:

“In her portrait, Ducreux wears a turquoise and white robe a l’anglaise with a zone front, the luster of the fabric suggesting a silk satin. The outer robe is made of a turquoise and white striped fabric, while the zone front and petticoat are a pure white. A translucent silk fichu with satin stripes is wound about her torso, and her sleeves are overlaid with a delicate lace. Fringe decorates the bottom of the petticoat. Luxury is suggested in ever detail. The textile of the outer robe shows highly skilled workmanship, with three smaller, subtle, lustrous stripes residing within each white stripe. The fichu is similarly decorated with satin woven stripes and polka dots.

(…) The robe a l’anglaise worn by Ducreux, while initially seeming to symbolize luxury, is in actuality in line with Revolutionary ideals. The robe a l’anglaise, literally meaning ‘English dress’, was also a new style of garment in the 1780s. Previously, women had worn the elaborate robe a la francaise, a garment which took an enormous amount of fabric to construct and decorate. The robe a l’anglaise had developed in England as an expression of the simple English aesthetic, and indeed was extremely simple in cut and décor when compared with the robe a la francaise. Furthermore, in France, to wear English styles was to align oneself with the constitutional monarchy of England, which the early years of the Revolution strove for. For Ducreux to wear a robe a l’anglaise, she not only embraced traditional gender roles but aligned herself with a more egalitarian society.

(…) The stripes of Ducreux’s dress seem to mirror the column, elongating it into a soft, feminine curve. This, combined with the soft curves of the harp and the vase, detract from the harsh, straight, masculine lines and give the painting a softer, more feminine feel.”

.Another interesting article about Rose Adélaïde Ducreux can be found on this link here.