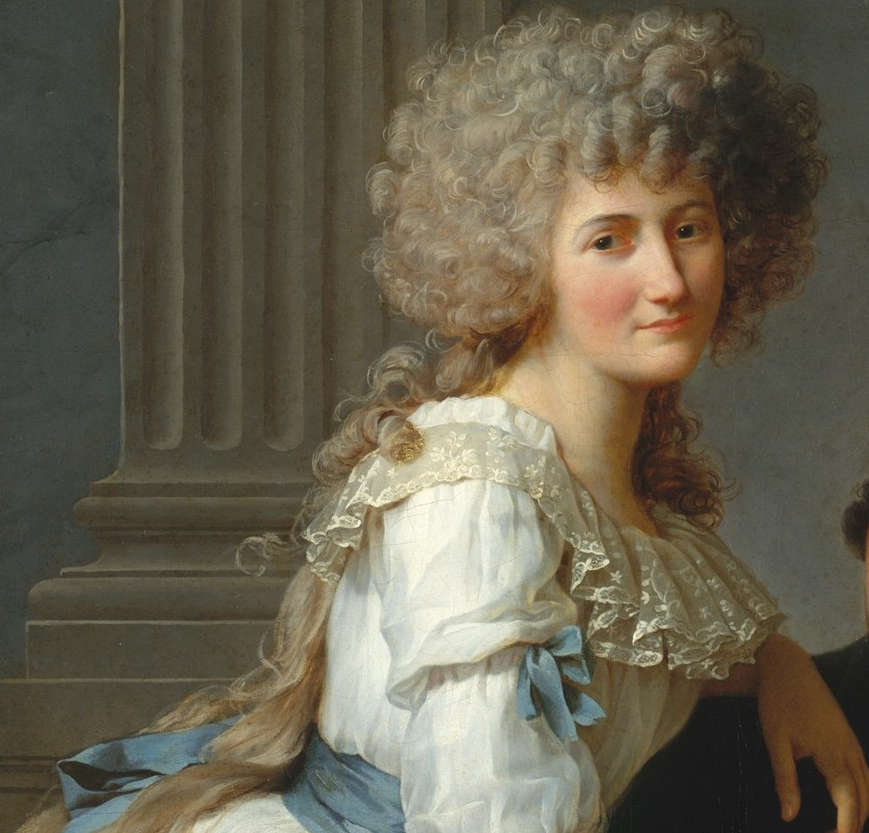 Artist: Jacques Louis David (French, Paris 1748–1825 Brussels)
Date: 1788
Medium: Oil on canvas
Dimensions: 102 1/4 x 76 5/8 in. (259.7 x 194.6 cm)
Via: MET Museum
.
“This great double portrait was painted when the artist, at the peak of his powers, had become the standard-bearer of French Neoclassicism. Lavoisier is known for his pioneering studies of oxygen, gunpowder, and the chemical composition of water. In 1789 he published a treatise on chemistry illustrated by his wife, who is believed to have been David’s pupil. Lavoisier was involved in a political scandal which led him to withdraw the present painting from the 1789 Salon. Despite his service to the revolutionary regime, he was guillotined.
.
This is one of the grandest portraits of the eighteenth century, painted in 1788 when the thirty-one-year-old David was at the peak of his powers and had become the self-appointed standard-bearer of French Neoclassicism. Antoine-Laurent Lavoisier is known today as the founder of modern chemistry, for his pioneering studies of oxygen, gunpowder, and the chemical composition of water. In 1789, his theories were published in the influential Traité elementaire de chimie. The illustrations in this book were prepared by his wife, who is believed to have studied with David. Marie-Anne-Pierrette Paulze was only thirteen when her father, a fermier-générale (tax collector for the royal government), married her to the twenty-eight-year-old Lavoisier. The couple’s income and social standing came from Lavoisier’s own position of fermier-générale, which eventually led to his execution at the guillotine in 1794, during the French Revolution. His widow married the eccentric American inventor Count Rumford in 1804 but soon separated from him; she died in Paris in 1836.Full-length standing portraits of private citizens are rare in French eighteenth-century painting, though much more frequent in British portraits of landed gentry and nobility. The air of informality and arrested, spontaneous action seems to derive from English portrait models, but the controlling reference, as Edgar Wind determined in 1947, is to the trope of “artist and his muse.” Apropos the position of Madame Lavoisier in this painting, Antoine Schnapper (1982) cited Jean-François Ducis‘s verse, “Pour Lavoisier, soumis à vos lois / Vous remplissez les deux emplois / Et de muse et de secrétaire” (For Lavoisier, subject to your law, you fill two posts, that of muse and of secretary). It is also possible, as Wind suggested, that David used Hogarth’s portrait of the actor David Garrick and his wife (Royal Collection, Windsor) as a point of departure. Engravings of English portraits abounded in the studios of French artists at the time, and were consulted by painters as diverse as Prud’hon, Vincent, David, and their various students.

Lavoisier’s habit noir, as opposed to the colorful suits of courtiers, was the customary, English-inspired dress of men who owed their rank to a profession or purchased office. Madame Lavoisier’s muslin gown is characteristic of fashionable women of her day, neither exaggerated nor excessively modest. Both are dressed formally, and not in déshabille, as was the eighteenth-century convention for artists and scientists at work. In other words, the interruption that provides the pretext for the portrait is as carefully staged as every other aspect of the painting, from the array of instruments that would not necessarily be used together, to the red velvet cloth, inappropriate for messy scientific experiments, to the expensive gilt furniture and the invented, though stately and restrained, architecture. Madame Lavoisier recorded an experiment in her husband’s actual laboratory in a drawing made in 1790–91 (private collection), in which she includes herself in a pose that echoes that of her husband in David’s painting.

Although the documents concerning the commission have not been found, David’s payment of 7,000 livres is recorded in a receipt dated December 16, 1788 (Grimaux 1888 and Brière 1909). This was a huge sum: David had charged Louis XVI only 6,000 livres for The Lictors Returning to Brutus the Bodies of His Sons (Musée du Louvre, Paris). David had planned to include the Lavoisier portrait at the Salon of 1789, but it was withdrawn at the last minute and not exhibited publicly until a hundred years later. Although it has since become one of David’s most famous works, and is justifiably considered his finest portrait, it had no immediate impact on the artists of David’s generation, nor on the generation of his students. ”