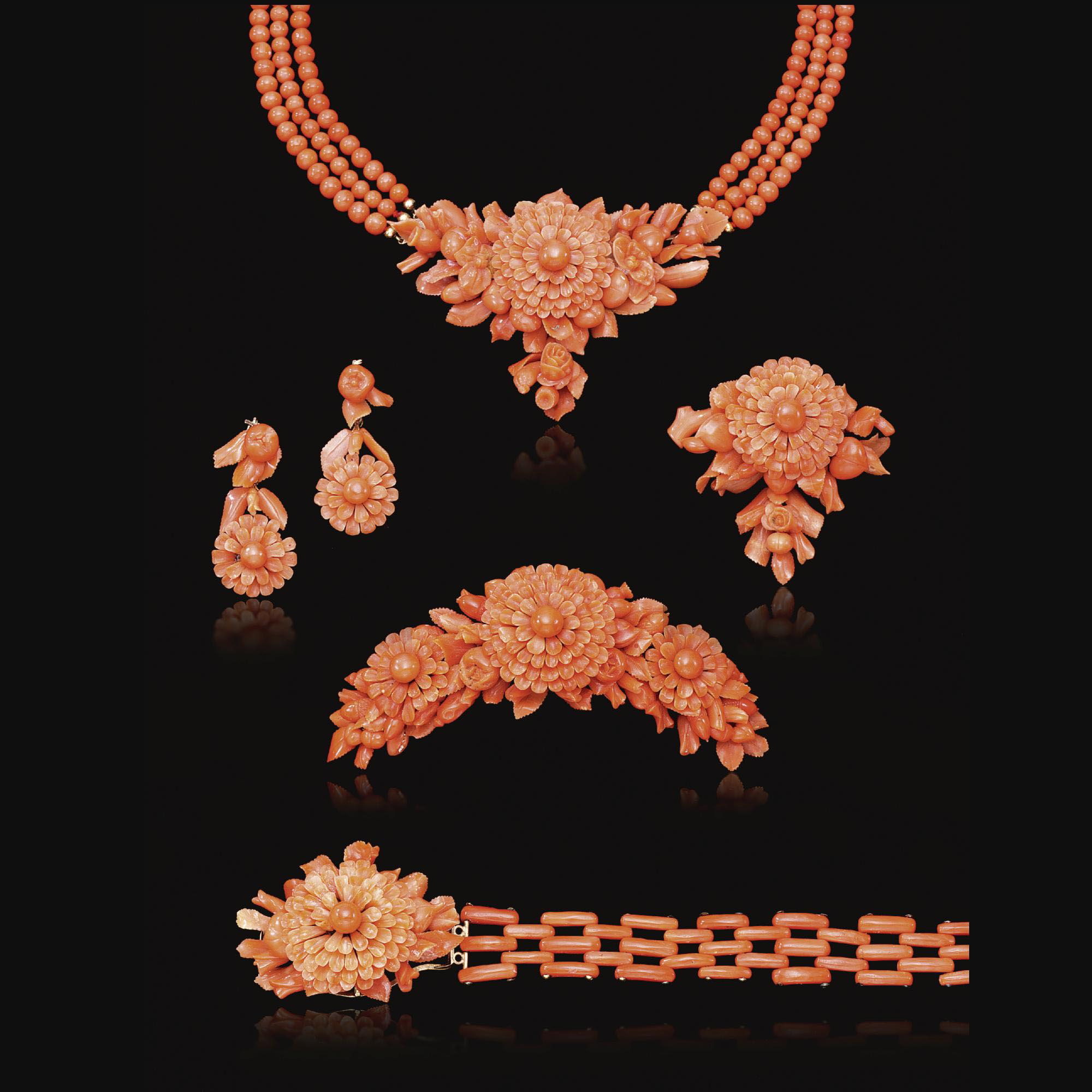 Carved coral parure, mid 19th century
.
Comprising: a necklace, a bracelet, a brooch, a pair of pendent earrings and a hair ornament; each highlighted by a principal carved coral flower head within frames of carved coral branches, fruits, buds and flowers; the necklace to a three row coral bead back, the bracelet on an articulated strap of gate pattern linking, the hair ornament on a black silk strap, necklace length approximately 375mm, bracelet circumference approximately 183mm, later earrings screw fittings, original fitted case.
.
This coral parure was a present of Leo von Klenze (1784-1864) to his wife Maria Felicitas Blangini (1790-1844), a great beauty very much appreciated at the Bavarian court by the King Ludwig I. Leo von Klenze was a German neoclassicist architect, painter and writer. Court architect of King Ludwig I, Leo von Klenze was one of the most prominent representatives of Greek revival style. Between 1808 and 1813 he was a court architect of Jérome Bonaparte, King of Westphalia. He also built many neoclassical buildings in Munich, including Ruhmeshalle and Monopteros temple. When Greece won its independence, the son of Ludwig I Otto became the first king of the country. Von Klenze was then invited to Athens to submit plans of city reconstruction in the style of Ancient Greece. Furthermore, Emperor Nicholas I commissioned von Klenze to design a building for the New Hermitage, a public museum that housed Greek, Roman and Egyptian antiquities.
.
He also travelled extensively in Italy throughout his life and this parure was almost certainly bought in Naples as a souvenir on one of these occasions. The parure was then left to his daughter-in-law Emily von Klenze (1813-1878), wife of his eldest son Hippolyt (1814-1880). The jewels were left to their daughter Irene Athenais (1850-1916) who married in 1879 Angelo Graf von Courten. It was then passed to Rosamund Courten (1875-1962) and hence by descent to the present owner.
.
Coral was at the height of fashion between 1845 and 1865, and worn in all possible forms: either carved as beads, naturalistic sprays of leaves and flowers, or left simply in its natural branch form. Most coral on the market at the time was carved in Italy, especially in Genoa and Naples. The colour of the coral of this parure was much favoured and plentiful at the time in the Bay of Naples.
source: Sotheby’s