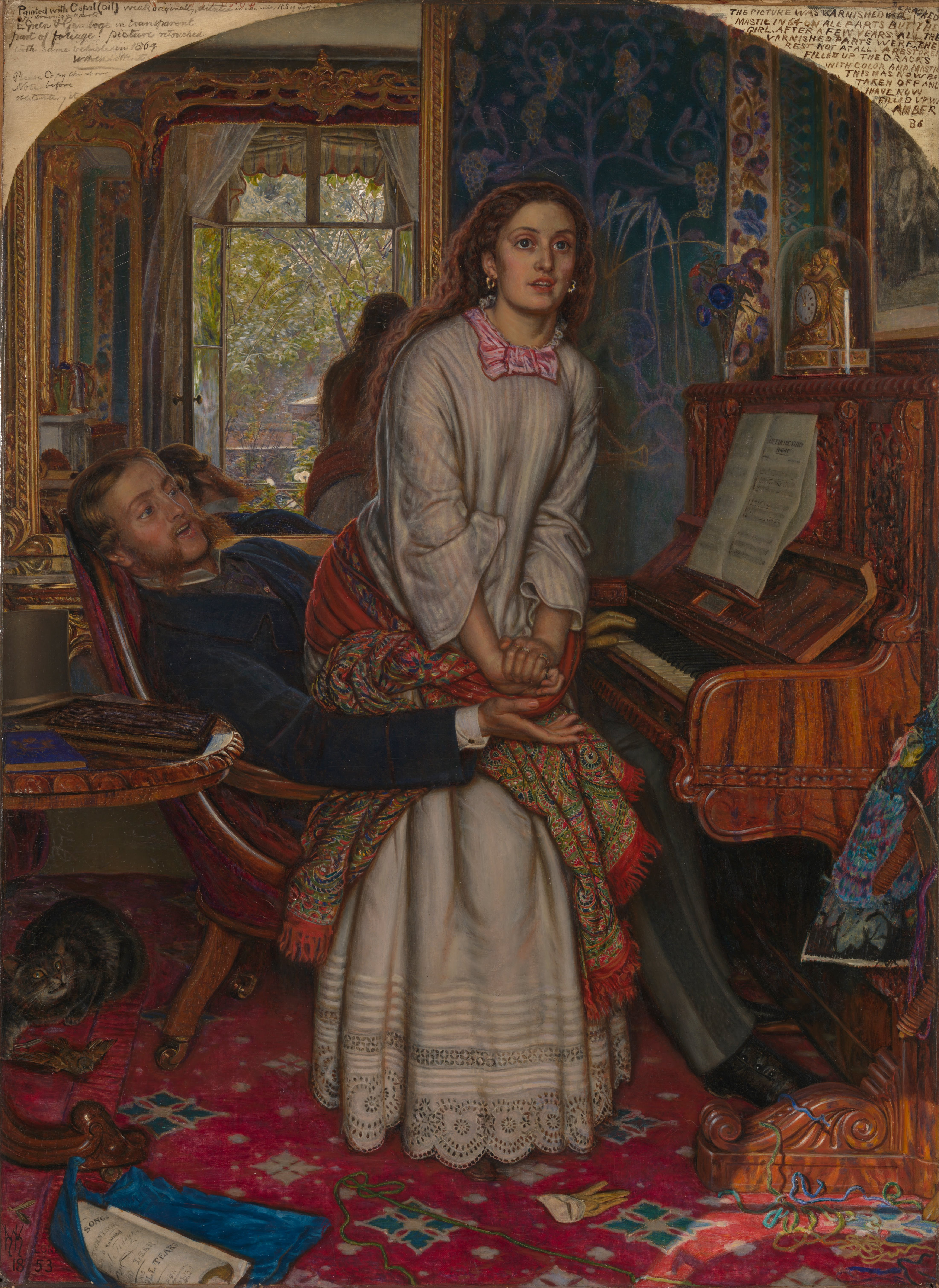 The Awakening Conscience was conceived as the material counterpart to Hunt’s The Light of the World (1851-3, Warden and Fellows of Keble College, Oxford). Its inspiration was a verse from Proverbs: ‘As he that taketh away a garment in cold weather, so is he that singeth songs to an heavy heart‘. With his typical thoroughness, Hunt hired a room at Woodbine Villa, 7 Alpha Place, St John’s Wood, a ‘maison de convenance’, to use as the setting. A gentleman has installed his mistress (known to be such because of her absence of a wedding ring) in a house for their meetings. As they play and sing to Thomas Moore’s Oft in the Stilly Night, she has a sudden spiritual revelation. Rising from her lover’s lap, she gazes into the sunlit garden beyond, which is reflected in the mirror behind her. The mirror image represents the woman’s lost innocence, but redemption, indicated by the ray of light in the foreground, is still possible. Intended to be ‘read’, the painting is full of such symbolic elements. The cat toying with the broken-winged bird under the table symbolises the woman’s plight. A man’s discarded glove warns that the likely fate of a cast-off mistress was prostitution. A tangled skein of yarn on the floor symbolises the web in which the girl is entrapped. Indeed, as Ruskin wrote to the Times on 25 May 1854, ‘the very hem of the poor girl’s dress, at which the painter has laboured so closely, thread by thread, has story in it, if we think how soon its pure whiteness may be soiled with dust and rain, her outcast feet failing in the street‘. The frame, designed by Hunt, also contains various symbolic emblems; the bells and marigolds stand for warning and sorrow, the star is a sign of spiritual revelation.

The underlying spiritual message was generally ignored by most critics, who concentrated instead on the more sensational aspects of the composition. The model is Hunt’s girlfriend Annie Miller, an uneducated barmaid whom he met in 1850 when she was fifteen.

Initially, the painting appears to depict a momentary disagreement between husband and wife, but the title and a host of symbols within the painting make it clear that this is a mistress and her lover. The woman’s clasped hands provide a focal point and the position of her left hand emphasizes the absence of a wedding ring. Around the room are dotted reminders of her “kept” status and her wasted life: the cat beneath the table toying with a bird; the clock concealed under glass; a tapestry which hangs unfinished on the piano; the threads which lie unravelled on the floor; the print of Frank Stone‘s Cross Purposes on the wall; Edward Lear‘s musical arrangement of Tennyson‘s poem “Tears, Idle Tears” which lies discarded on the floor, and the music on the piano, Thomas Moore’s “Oft in the Stilly Night”, the words of which speak of missed opportunities and sad memories of a happier past. The discarded glove and top hat thrown on the table top suggest a hurried assignation.

The room is too cluttered and gaudy to be in a Victorian family home; the bright colours, unscuffed carpet, and pristine, highly polished furniture speak of a room recently furnished for a mistress. Art historian Elizabeth Prettejohn notes that although the interior is now viewed as “Victorian” it still exudes the “‘nouveau-riche’ vulgarity” that would have made the setting distasteful to contemporary viewers. The painting’s frame is decorated with further symbols: bells (for warning), marigolds (for sorrow), and a star above the girl’s head (a sign of spiritual revelation). It also bears a verse from the Book of Proverbs (25:20): “As he that taketh away a garment in cold weather, so is he that singeth songs to an heavy heart“.

The mirror on the rear wall provides a tantalizing glimpse out of the scene. The window — opening out onto a spring garden, in direct contrast to the images of entrapment within the room — is flooded with sunlight. The woman’s face does not display a look of shock that she has been surprised with her lover; whatever attracts her is outside of both the room and her relationship. The Athenæum commented in 1854:

“The author of “The Bridge of Sighs” could not have conceived a more painful-looking face. The details of the picture, the reflection of the spring trees in the mirror, the piano, the bronze under the lamp, are wonderfully true, but the dull indigoes and reds of the picture make it melancholy and appropriate, and not pleasing in tone. The sentiment is of the Ernest Maltravers School: to those who have an affinity for it, painful; to those who have not, repulsive.”

The model for the girl was Annie Miller, who sat for many of the Pre-Raphaelites and to whom Hunt was engaged until 1859. The male figure may be based on Thomas Seddon or Augustus Egg, both painter friends of Hunt.