“I recollect my lady in a wood, Keeping her breath and peering – (firm she stood Her slim shape balanced on tiptoe – ) Into a nest whch lay below, Leaves shadowing her brow.” (From ‘My Beautiful Lady’ by Thomas Woolner, 1863)

Thomas Woolner (1825–1892), the only sculptor to have been a member of the Pre-Raphaelite brotherhood, wrote these lines in 1863, a year before he married Alice Waugh. He commissioned the painting from the artist and it was paid for by his friend Sir Francis Turner Palgrave (1824–1897), a civil-servant poet, as a wedding present.

The painting depicts the wife of the only sculptor to have been a formal member of the original pre-Raphaelite brotherhood, painted by a later adherent of the movement, who for a time shared a studio with its other major sculptor, Alexander Munro.

Alice was the youngest but one of eight daughters of ‘Dr’ George and Mary Waugh, and one of the three who married pre-Raphaelite artists. Two of them, Fanny and Edith, were successively married to Holman Hunt. Originally Fanny had been courted by Woolner; but the Woolners ceased to have any connections with the Hunts after Holman had married his deceased wife’s sister in defiance of law and convention.

The portrait was commissioned by Thomas Woolner (Hadleigh 1825– London 1892), known to be the inspiration for Ford Madox Brown’s The Last of England (1855; Birmingham) stimulated by Woolner’s previous emigration to Australia in 1852. It was begun in September 1864, the month of his marriage, and paid for with the £100 that civil-servant poet, Sir Francis Turner Palgrave (1824 – 1897), had given him to furnish his marital home. Woolner and Palgrave had previously shared lodgings in London. Palgrave’s celebrated anthology, A Golden Treasury of Songs, for which Woolner designed the vignette of the title-page, first appeared in 1861 and in the same year Woolner had made a sculpture portrait of his father. It had provoked a major scandal, however, when The Times revealed that the extraordinarily partial Handbook to the sculpture exhibited at the International Exhibition, excoriating Marochetti and Munro, but praising Woolner’s works to the skies, had been written by one sharing the address of 29 Welbeck Street with this “British Phidias”.

The portrait of Alice Waugh was finished a year after it was begun, when Woolner wrote to Palgrave to say: “I think it looks lovely, only that the red of the shawl attracts from the countenance… My wife has always been saying she wanted me to get something beautiful that your name might [be] associated with, and now I do not think I can do better.” It is indeed a beautiful painting; the combination of the tall, slender young woman and the lovingly delineated vegetation irresistibly recalling Hughes’s most celebrated painting, April Love (1855-56; Tate Britain), originally bought by William Morris and was in his home, Red House (NT), though the parallels with the later, but undated oil study called Amy (Birmingham City Art Gallery) are even closer.

On 6 September 1864 Woolner married Alice Gertrude Waugh. He had initially been in love with her sister, Fanny Waugh, and had previously proposed to her, but she turned him down. Fanny married Woolner’s Pre-Raphaelite colleague William Holman Hunt the following year, but died in childbirth a year later. In 1874, while in Italy, Hunt married their third sister Edith, an act which Woolner considered immoral and which was defined as incest under British laws at the time. He never spoke to Hunt again.

Hunt’s granddaughter Diana Holman-Hunt later claimed that before his marriage Woolner had been involved in a relationship with a lower-class girl called Amelia Henderson, who appealed to Hunt for support. Hunt arranged with Frederick Stephens to give her funds to emigrate to Australia so that she would not interfere with Woolner’s wedding plans.

Woolner and Alice had six children, four daughters and two sons. His eldest child, Amy, later wrote a biography of her father. His two sons Hugh (1866–1925) and Geoffrey (1867–1882) were sent to Marlborough College, where Geoffrey died at the age of 14. Hugh became a stockbroker.

Thomas Woolner died instantly from a stroke at the age of 67. His wife Alice died in 1912. Their son, Hugh, travelled back to his home in New York from her funeral on the RMS Titanic. He survived the sinking of the ship. 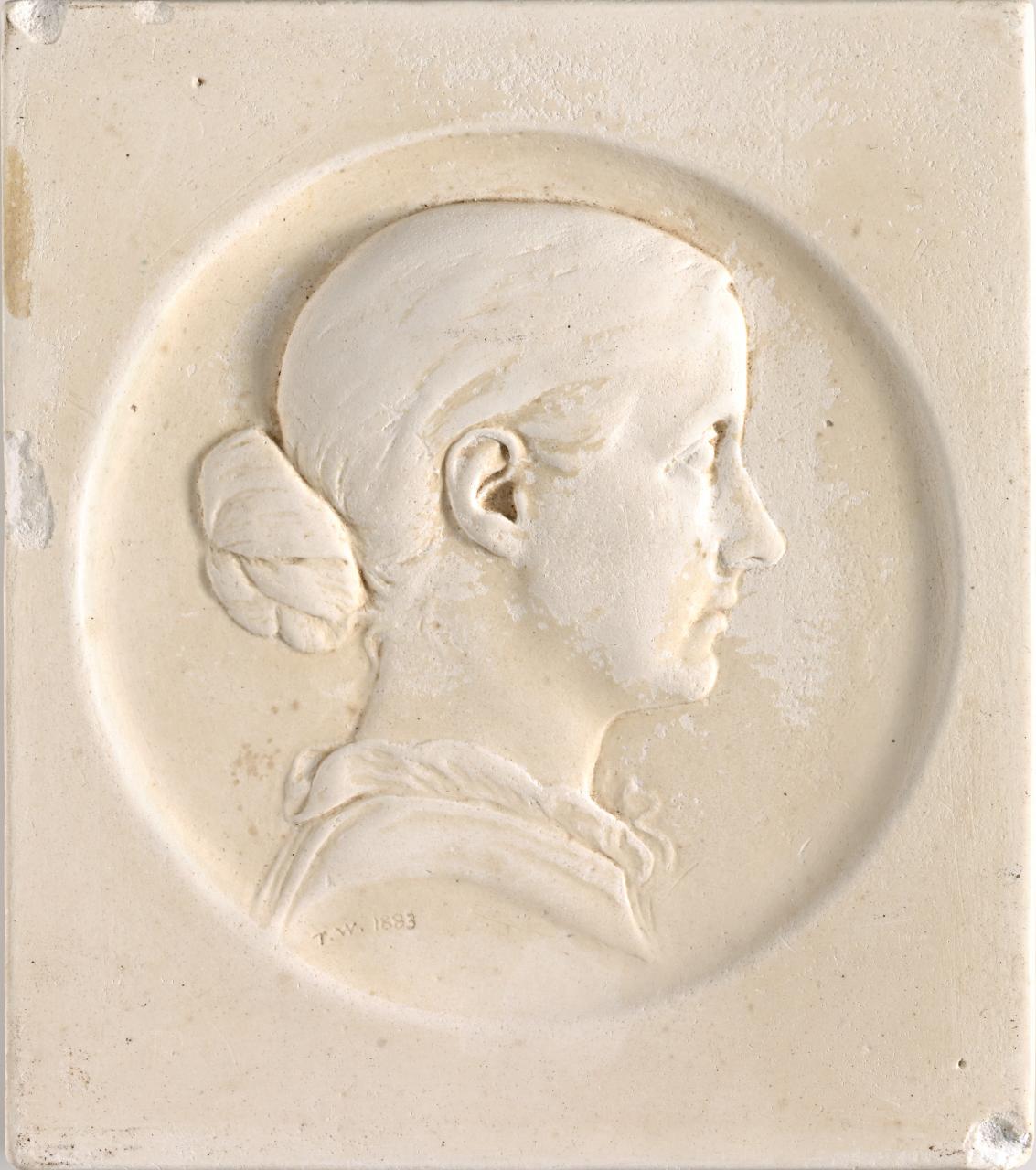 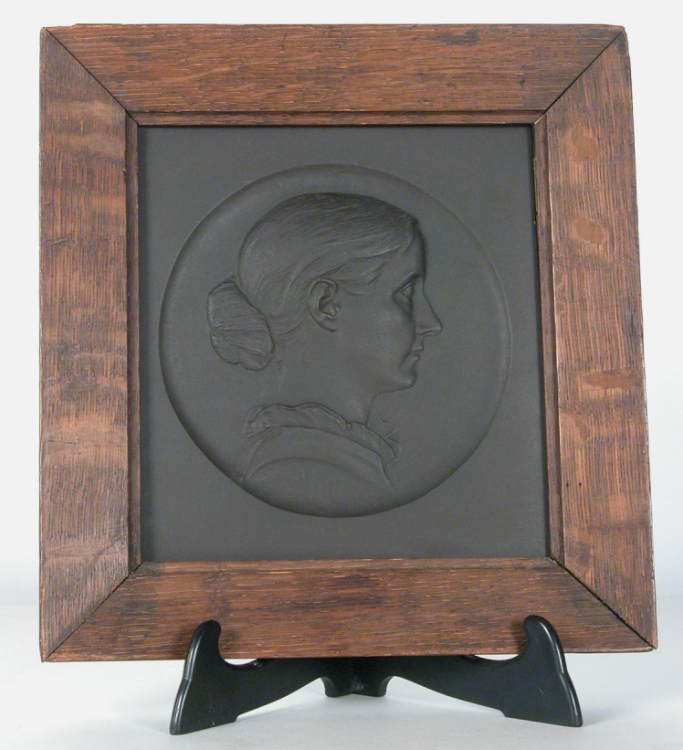 Bronze sculpture medallion in plain oak frame, Alice Gertrude Waugh, Mrs Thomas Woolner (1845 – 1912) by Thomas Woolner RA (Hadleigh 1825 – London 1892), signed, with initials, and dated 1883. Circular bronze bas relief medallion of Mrs Woolner by her husband, head and shoulders in profile, looking to right, with hair in taken back in bun at the nape of the neck. In 1883 Woolner also made medallions of his daughters Phyllis, Dorothy and Clare.