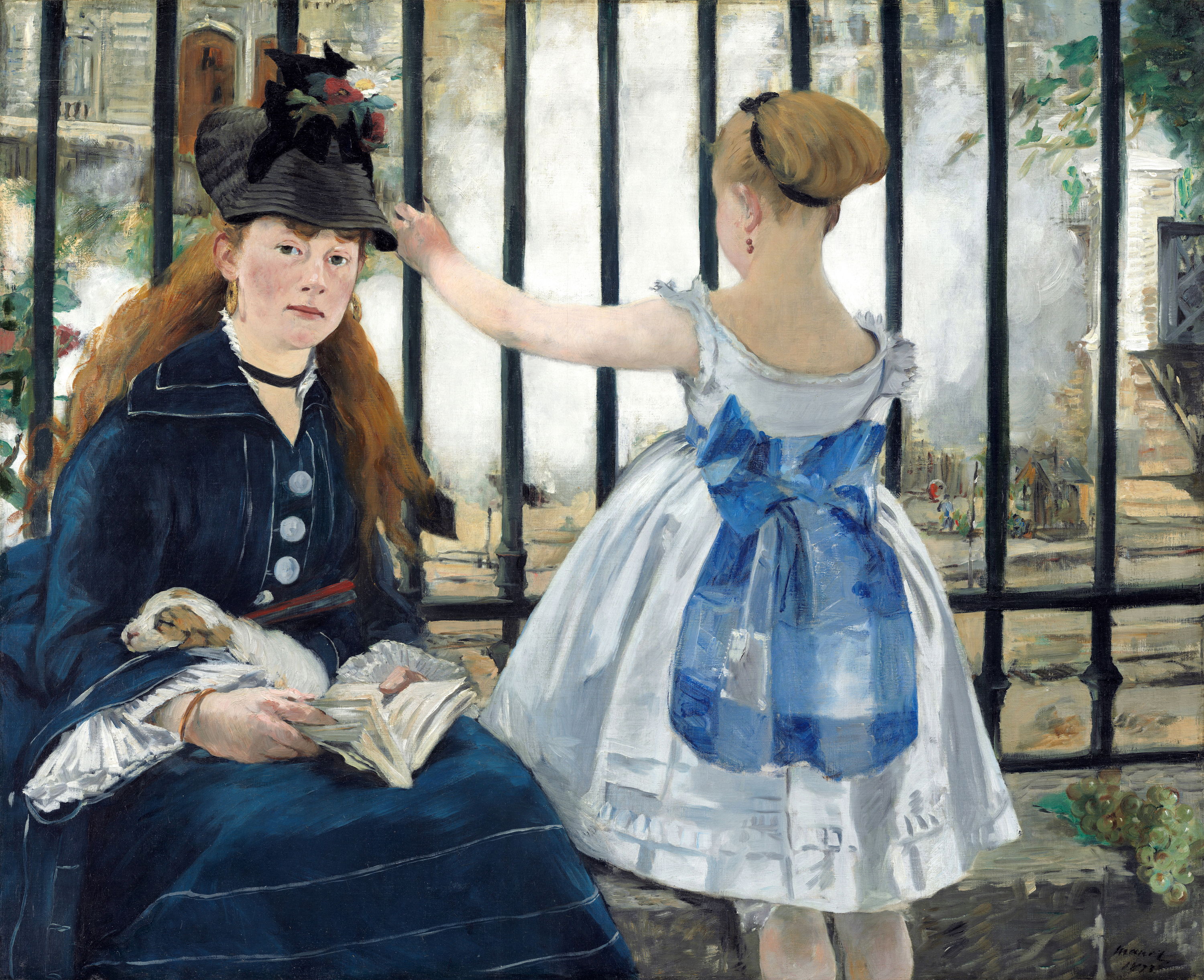 Victorian Meurent in The Railway by Edouard Manet, 1873

The Railway, widely known as Gare Saint-Lazare, is an 1873 painting by Édouard Manet. It is the last painting by Manet of his favourite model, the fellow painter Victorine Meurent, who was also the model for his earlier works Olympia and the Luncheon on the Grass. It was exhibited at the Paris Salon in 1874, and donated to the National Gallery of Art in Washington, D.C. in 1956.

Meurent is depicted sitting to the left side of the frame, in front of an iron fence near the Gare Saint-Lazare in Paris. The pensive subject is wearing a dark hat and sombre deep blue dress with white details, and is looking towards the viewer, while a sleeping puppy, a fan and an open book rest in her lap. Next to her is a little girl, modelled by the daughter of Manet’s neighbour Alphonse Hirsch, a contrasting figure wearing a white dress with large blue bow, standing her back to the viewer, watching through the railings as a train passes beneath them. The black band in the girl’s hair echoes the black band around the neck of the woman. Instead of choosing the traditional natural view as background for an outdoor scene, Manet opted for the iron grating which “boldly stretches across the canvas” (Gay 106). The only evidence of the train is its white cloud of steam. Modern apartment buildings can be seen in the background, including the house on the Rue de Saint-Pétersbourg, near the Place de l’Europe, where Manet had rented a studio since July 1872, and also a signal box and the Pont de l’Europe.

The arrangement compresses the foreground into a narrow focus, separated from the background by the row of railings. The traditional convention of deep space is ignored. Resting on a parapet to the right of the painting is a bunch of grapes, perhaps indicating that the painting was made in the autumn. The dog may be a reference to Titian‘s Venus of Urbino; Manet had earlier echoed Titian’s composition in his Olympia.