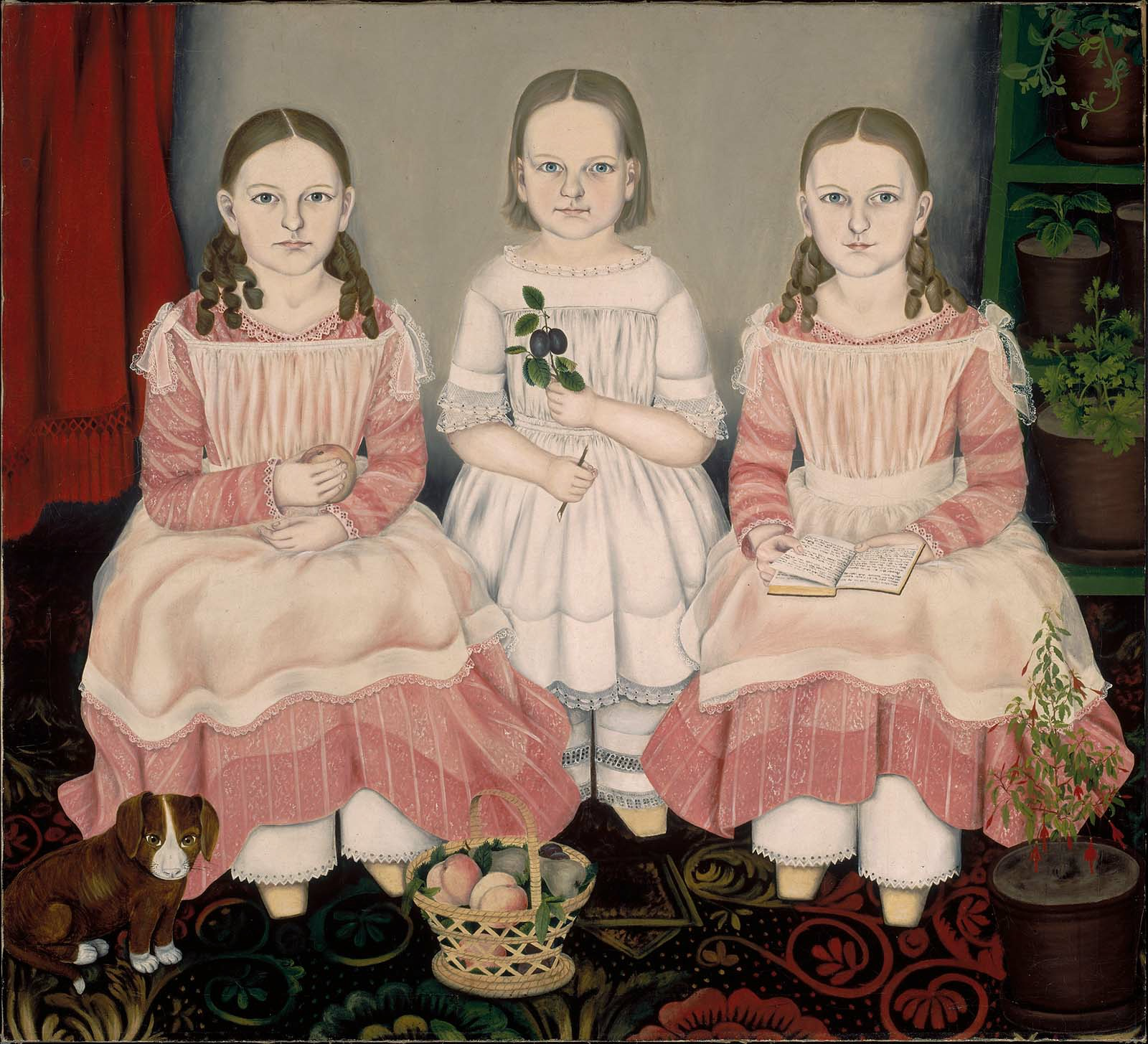 The Lincoln Children (Laura Eugenie, Sara, Augusta) by Susan Waters, 1845
.
Many folk artists of the eighteenth and nineteenth century were women (though few of their names have come down to us), who created objects for domestic use-for instance, quilts, embroidered pictures, and watercolor memorials. Susan Waters, however, is unusual for having painted portraits for a living, and especially for traveling from town to town in search of commissions, a mode of working more often chosen by men.
.
Waters’s only artistic training came during her years at a female seminary in Friendsville, Pennsylvania, which she first attended at age fifteen. She took up portraiture about 1843, when her husband became ill and unable to support the family. Waters is known to have been active as an artist for only about three years, painting the local citizenry in southern New York State. In the 1840s she specialized in portraits of children, and this image of three of the twelve children of Otis Lincoln, an innkeeper from Newark Valley (near Binghamton), New York, is widely regarded as one of her finest achievements. The three little girls (Laura Eugenie, age nine, Sara, age three, and Augusta, age seven) are arranged in a pyramid. They are shown in fancy dresses, ornamented with eyelet and lace. The girls hold pieces of fruit and a book, common attributes in mid-nineteenth-century portraits of children and meant to advertise their sweetness and their attentiveness at school. The handsome furnishings (including an expensive ingrain carpet), the pretty plants on a stand, and even the charming puppy with its neatly aligned paws combine to create a pleasing image of domestic stability and comfort. The intense expressions of the children, on the other hand, give the painting a startling directness.
.
Shortly after finishing The Lincoln Children, Susan Waters apparently retired from painting. She resurfaced some thirty years later as a painter of animal subjects and achieved modest success with sentimental pictures of kittens and baby chicks. None of them equaled the ambition and vividness of her early folk portraits, and it is these for which she is most admired today.
source: Arts Jumeaux, Museum of Fine Arts Boston