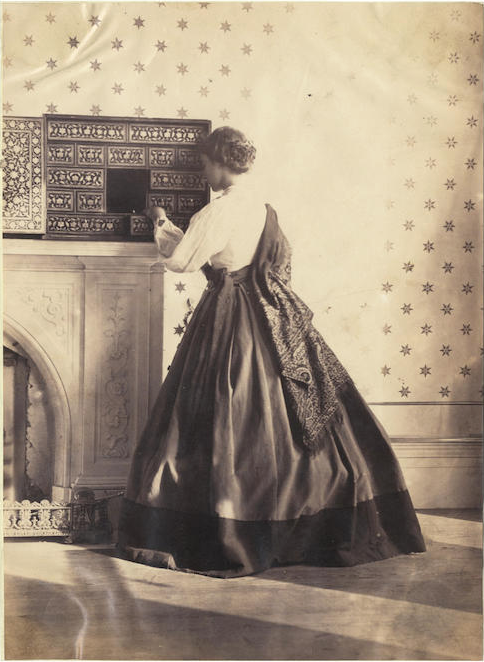 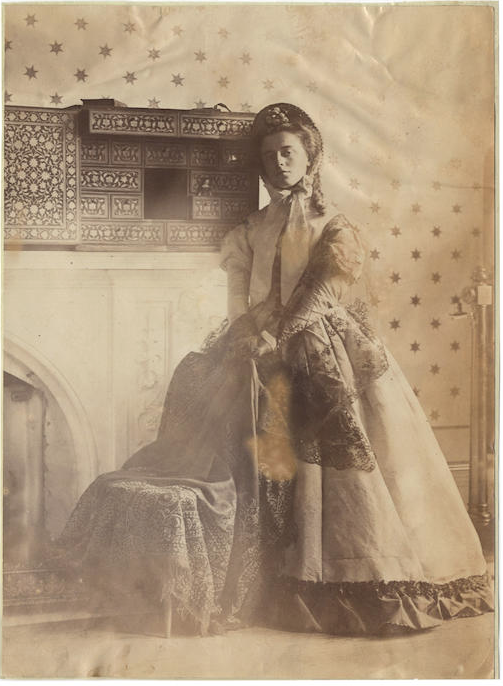 Clementina Maude, wearing the full dark skirt and a paisley shawl, facing away from the camera as if examining one of the draws in the cabinet resting on the mantelpiece, laid on leaf now trimmed to image size, photograph of a nineteenth-century Italian painting pasted on verso, the sitter identified in pencil on the verso with number ‘8’.

The photographer is the girl’s mother, Lady Hawarden:

Clementina Elphinstone Fleeming was born in Dunbartonshire in 1822, the third of five children of a British father, Admiral Charles Elphinstone Fleeming (1774-1840), and a Spanish mother, Catalina Paulina Alessandro (1800-1880). In 1845 she married Cornwallis Maude, an Officer in the Life Guards. When Maude’s father, Viscount Hawarden, died in 1856, his title, and considerable wealth, passed to Cornwallis.

The surviving photographs suggest that Clementina, now Lady Hawarden, began to take photographs on the Hawarden’s Irish estate at Dundrum, Co. Tipperary, from late 1857. Many of these were taken with a stereoscopic camera, and the present archive contains several Dundrum photographs which form one half of a stereoscopic image.

In 1859 the family also acquired a new London home at 5 Princes Gardens (much of the square survives as built, but No. 5 has gone). From 1862 onwards, Lady Hawarden turned the entire first floor of the property into her photographic studio. Here she kept some of the props which came to be synonymous with her work: gossamer curtains, a freestanding mirror, a small chest of drawers and the iconic ’empire star’ wallpaper, as seen in several of these photographs. The superior aspect of the studio no doubt encouraged Lady Hawarden’s sophisticated, subtle and pioneering use of natural light.

It was also in this studio that Lady Hawarden began to concentrate on photographing her eldest daughters, Isabella Grace, Clementina, and Florence Elizabeth, whom she would often dress up in costume tableaux. The girls were frequently shot – often in romantic and sensual poses – in pairs, or, if alone, in front of a mirror or with their back to the camera. Hawarden’s photographic exploration of identity, otherness, the doppelgänger and female sexuality, as expressed in the vast majority of these photographs, was incredibly progressive in comparison with her contemporaries, most notably Julia Margaret Cameron. As Graham Ovenden comments in Clementina Lady Hawarden (1974), she “struck out into areas and depicted moods unknown to the art photographers of her age. Her vision of languidly tranquil ladies carefully dressed and posed in a symbolist light is at opposite poles from Mrs Cameron’s images… her work… constitutes a unique document within nineteenth-century photography“.

She exhibited, and won silver medals, in the 1863 and 1864 exhibitions of the Photographic Society, and was admired by both Oscar Rejlander and Lewis Carroll, who purchased five images which went into the Gernsheim Collection and are now in Texas. In 1865 Lady Hawarden died, and although her loss was regretted in the photographic journals, her work was soon forgotten.

In 1939 her granddaughter presented the V&A with 779 photographs, most of which had been roughly torn from their original albums with significant losses to corners. Proper examination and appreciation of this gift was delayed by World War Two, and it was not until the 1980s that Mark Haworth-Booth offered Virginia Dodier the opportunity to make a detailed appraisal and catalogue of the V&A holdings. These holdings constitute almost the entire body of Hawarden’s surviving work, apart from the five images now in Texas, and small groups or single images at Bradford, the Musée d’Orsay and the Getty. The appearance of the present collection is totally unexpected, and represents a remarkable opportunity to acquire a series of images (most of which appear not to be duplicated elsewhere) by a photographer whose work is otherwise unobtainable.

Like those in the V&A, most of the present images have been removed from an album, but, remarkably, with very little loss: only one image is missing a corner, making this collection all the more exceptional. Some smaller images are arranged on album leaves that are still intact (the images measuring 322 x 235mm). As distinct from the V&A’s holdings, it is presumed that these images are from an album which belonged to one of the sitters or their siblings. The most significant group in the present collection measure approximately 198 x 144mm. and mostly depict one figure in the first floor front room at 5 Princes Gardens. Curiously there are no images of this size in the V&A collection, but the presence of close variant images in a smaller format suggests that Lady Hawarden was using two cameras in the same session. The V&A collection has a variant pose of image number 5 (below), but in the smaller format [PH.457:564-1968].