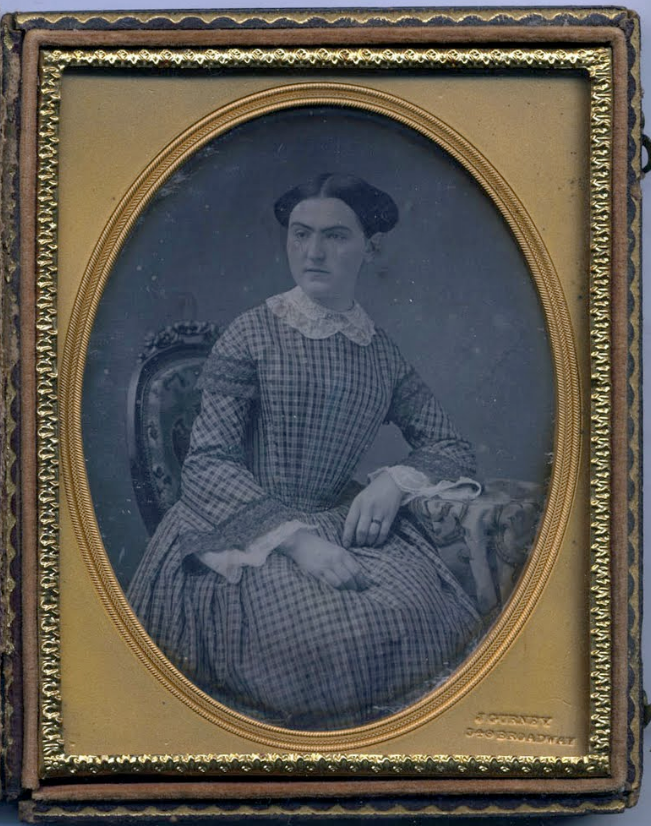 The mat is stamped “J Gurney, 349 Broadway”. This was Gurney’s second studio, which he occupied from 1852 to 1858— nine rooms where New York’s most distinguished citizens came to have their portraits taken and to lounge around the palatial reception room, admiring the daguerreotypes on display.

The portrait of Ophelia illustrates the chair, the tablecloth and the exact pose that Gurney used for nearly all the women he photographed during this period. (He used different props and poses for men and children.) Every photographer labored to find the pose that would most gracefully display a woman’s face, body and hands.  The subject had to hold the pose for quite a few seconds, and many photographers used a head brace to make sure they didn’t move.  Children were often strapped into their chair and babies sometimes could not be kept still until the photographer had to throw a sheet over the mother and then place the tot in her lap for a “hidden mother” portrait.

Ophelia Merle was clearly not a beauty, but she was well-placed in New York’s social hierarchy, with French-speaking parents and ancestors from Switzerland. Her full name in New York’s “Who’s Who” was  “Ophelia Merle d’Aubigné.”  She was born on Sept. 28, 1835, married in 1862 to Lyman Beecher Carhart of Peekskill, New York, gave birth to two children (also listed in “Who’s Who in New York City & State”), and she died on July 7, 1893 at the age of 57.