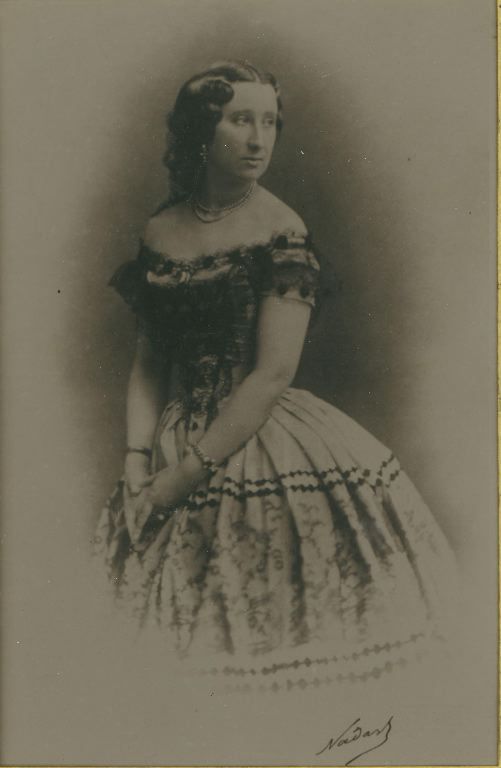 Céleste de Chabrillan (1824-1909), courtesan and author, illegitimate daughter of Anne-Victoire Vénard, was born on 27 December 1824 in Paris. Her childhood was unhappy and at 15 she was imprisoned for vagrancy. At 16 she entered a brothel but left within six months to become Céleste Mogador, dancer at the Bal Mabille and the Théâtre Beaumarchais and toast of Paris as the Hippodrome’s star horse-rider. She became the mistress of Lionel, comte de Chabrillan, who was busily wasting his fortune. This was done by 1852 and Lionel left for the Australian goldfields. Céleste meanwhile achieved success as an actress and her memoirs were accepted for publication. On 9 January 1854 she married Chabrillan in London and two days later they sailed for Melbourne in the Croesus to take up his appointment as French consul-general, a position obtained for him by his infuriated family.

The Chabrillans erected their prefabricated house at St Kilda and visited turbulent Ballarat; Céleste recorded that Governor Sir Charles Hotham ‘is a man of the highest breeding, most amiable but that is not enough’. This visit and later experiences provided Céleste with material for her novels. She had little social life to distract her as her Mémoires had preceded her to Melbourne. She described herself as ‘an object of fear and repugnance to certain members of Melbourne society’ and though, curiosity overcoming them, ‘some of the braver and kindlier ladies called’, she was ‘suspicious of their advances’. Her few friends included the photographer, Antoine Fauchery, and Lola Montez.

In 1856 an unlucky importing venture impoverished the Chabrillans and in August Céleste sailed for France to collect money owing to them. In spite of the climate’s effect on her health, she wrote, ‘I felt myself loving that hard Australian soil; the plants, the trees, my own loneliness’. In Paris her best-selling Mémoires gained instant publication for her Australian novel, Les Voleurs d’Or. Alexander Dumas senior reviewed it and wrote of Céleste, ‘One of those created by God for self-sacrifice and struggle … During the years she spent … away from France … she re-educated herself completely; not only did she learn English but re-learned French … during two nights I sat up until dawn reading Les Voleurs d’Or‘. Céleste wrote for twelve to fifteen hours a day, producing two more Australian novels, Miss Pewell and The Emigrants. She paid their creditors and was rejoined briefly by Lionel who then returned to Melbourne and died from dysentery on 29 December 1858. Céleste refused the Chabrillans’ demand that she relinquish their name. Their later persecution was balanced by the interest of the two Dumas in her literary career. Altogether she wrote twelve novels, twenty-six plays, seven operettas, poems and songs.

In the Franco-Prussian war Céleste started Les Soeurs de France to care for the wounded and later gave her home at Le Vésinet to house war orphans. Her friendship with the comte de Naurois left her financially secure for the rest of her long life. She died at Montmartre on 18 February 1909.