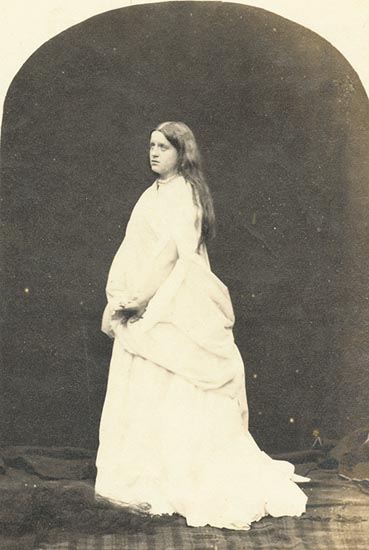 Allegorical Portraits of the Countess of Dudley by Victor Albert Prout (attributed to), 1863

Georgina Elisabeth Ward, Countess of Dudley (née Moncreiffe; 9 August 1846 – 2 February 1929) was the wife of William Ward, 1st Earl of Dudley, and a noted beauty of the Victorian era.

During the Boer War and World War I, Lady Dudley served with the British Red Cross Society. In late 1900, she was involved in running the Mayfair nursing home for disabled officers under its auspices. Her actions at that time proved to be pivotal in ensuring Captain Trenchard (later to become Marshal of the Royal Air Force) recovered from a wound he had received in action.

She died at her home at Pembroke Lodge, Richmond Park in February 1929 at the age of 82, having spent over half her life as a widow. She and her husband the Earl of Dudley had six sons and one daughter.

The theft of Lady Dudley’s jewels on 12 December 1874 at Paddington Station was a famous crime in Victorian England. The jewels worth perhaps £25000 were never recovered.