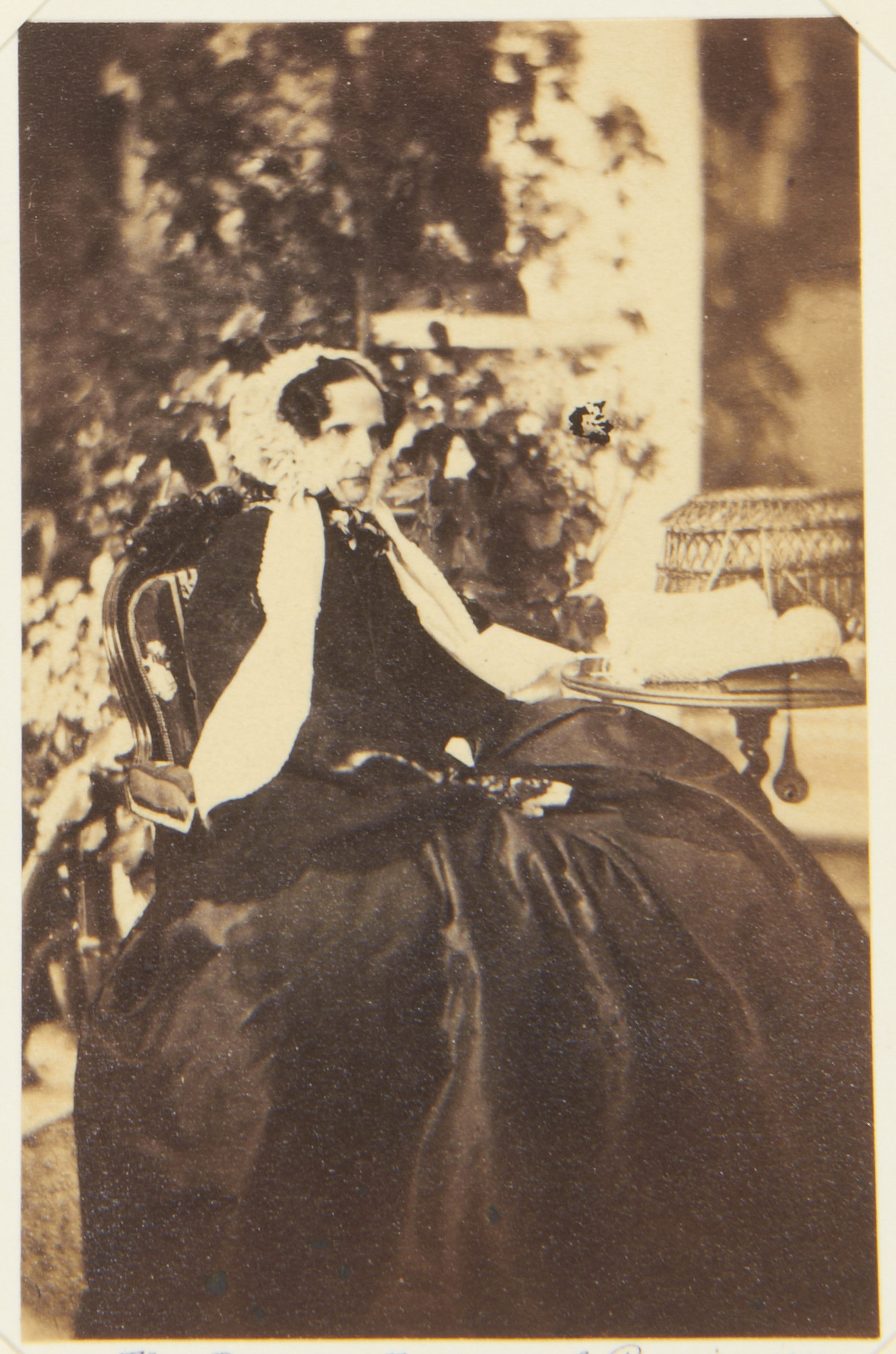 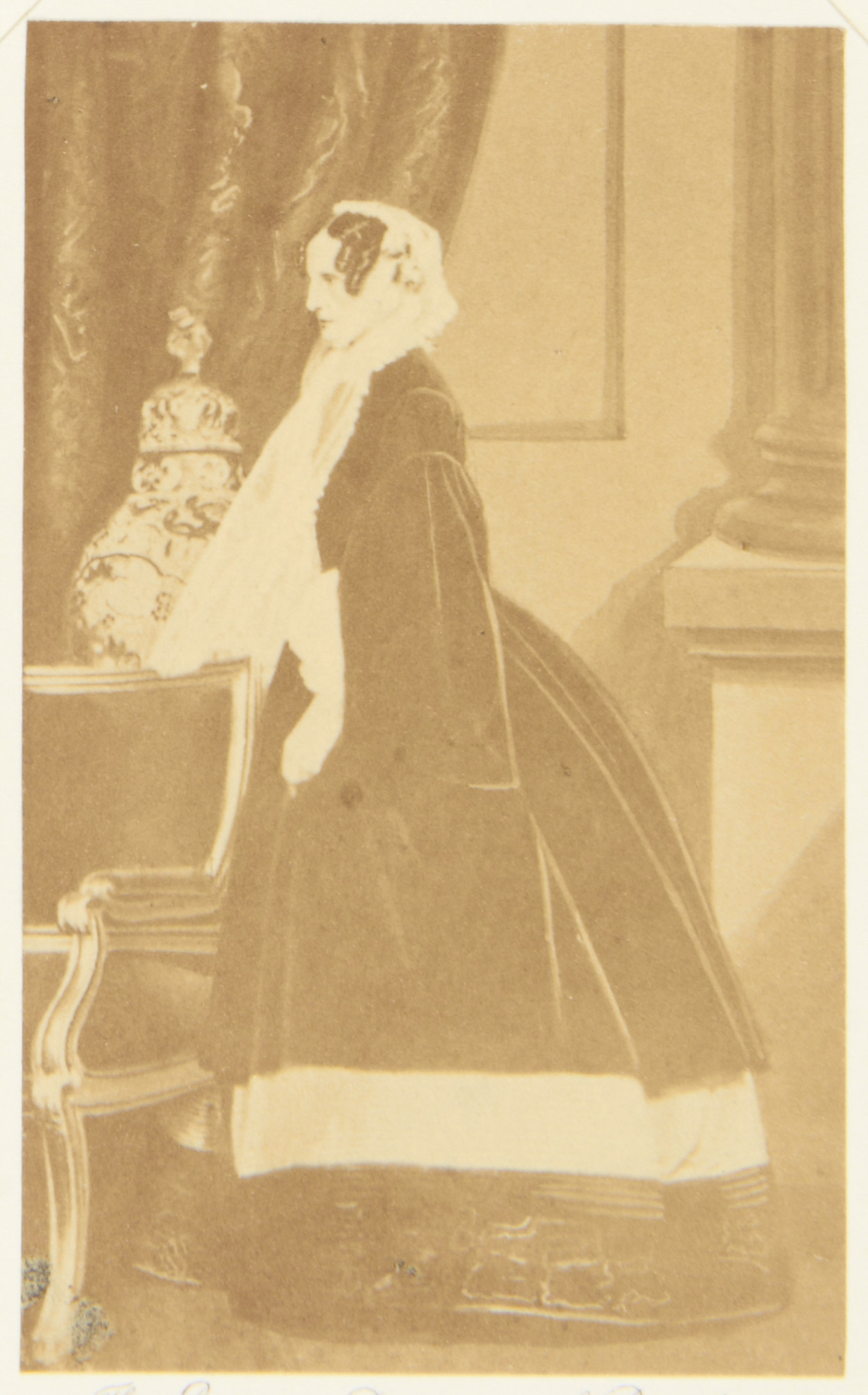 On the photo we see Alexandra Feodorovna in the year of her death. She bore seven children.

Alexandra Feodorovna, born Princess Charlotte of Prussia (13 July 1798 – 1 November 1860), was Empress consort of Russia. She was the wife of Emperor Nicholas I, and mother of Emperor Alexander II.

In 1814, her marriage was arranged for political reason with Grand Duke Nicholas Pavlovich of Russia, the future Tsar Nicholas I. They fell in love with each other and married in 1817. Upon her marriage, Princess Charlotte converted to Russian Orthodoxy, and took the Russian name Alexandra Feodorovna. Ideally matched with her husband, she had a happy marriage that produced a large family; seven children survived childhood.

At the death of her brother in law, Tsar Alexander I of Russia, in December 1825, Alexandra’s husband became the new Russian Emperor. Alexandra enjoyed her husband’s confidence in affairs of state, but she had no interest in politics other than her personal attachment to Prussia, her native country. She was the obedient and admiring supporter of her husband’s views. Her personality was completely overshadowed by Nicholas I’s strong character. As empress consort, Alexandra Feodorovna had no interest in charity work. Her chief interests were in family affairs, dancing, balls and jewels. After 1841 her health deteriorated. She spent long sojourns abroad in search for a respite to her frail constitution. The death of her youngest daughter, Alexandra, in 1844, was a terrible blow. As she became largely an invalid, Nicholas I took mistresses, but Alexandra retained her husband’s love. She survived Nicholas I by five years and died in 1860, a much loved matriarch of her family.

(…) Alexandra Feodorovna survived her husband by five years. She retired to the Alexander Palace at Tsarskoe Selo, and remained on good terms with her late husband’s mistress Barbara Nelidova, who she made her personal reader.

The Dowager Empress’s health became more and more fragile with the years. Unable to spend the harsh winters in Russia, she was forced to make long sojourns abroad in Switzerland, Nice and Rome. She wrote in September 1859 “I am homesick for my country and I reproached myself for costing so much money at a time when Russia has need of every ruble. But I cough and my sick lungs cannot go without a southern climate”.

After returning from a trip abroad in July 1860 she did not cease to be ill. In the autumn of 1860, her doctors told her that she would not live through the winter if she did not travel once more to the south. Knowing the danger, she preferred to stay in St. Petersburg, so that if death did come it would happen on Russian soil. The night before her death, she was heard to say, “Niki, I am coming to you.” She died in her sleep at the age of sixty-two on 1 November 1860 at Alexander Palace in Tsarskoe Selo.

She had seven children:

Via: Wikipedia, The Royal Collection