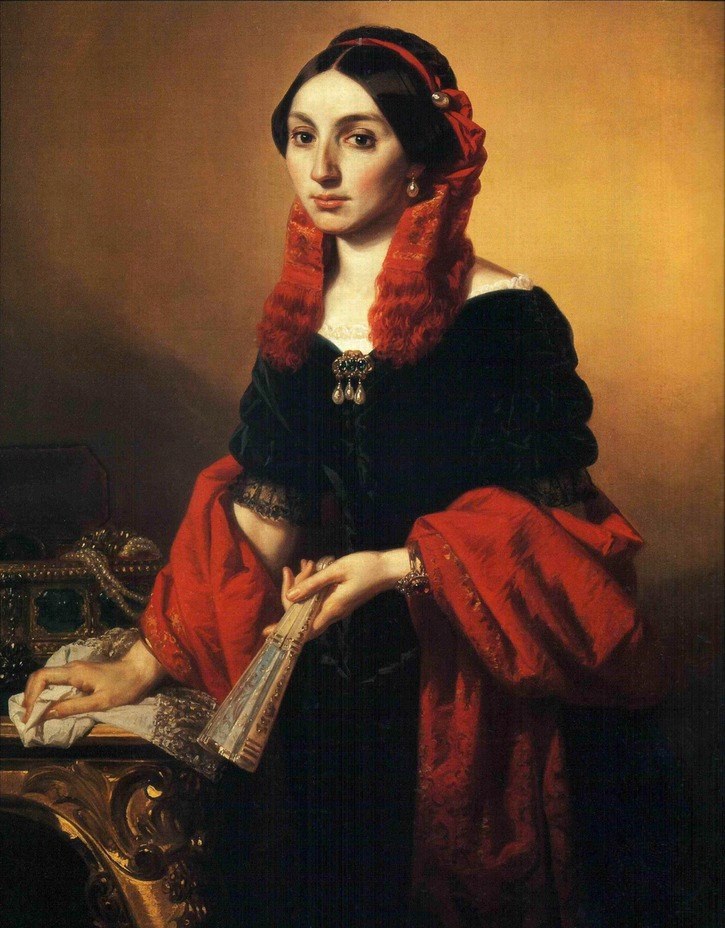 Louise wears a dark velvet evening dress with two-segment accordion sleeves and a vee waistline. She has a beautiful fringe trimmed red headdress, matching her red embroidered shawl. Here I see a somewhat mysterious woman who emanates a certain sensuality. Not a lot will be left of that only a few years later.

Louise Marie Thérèse d’Artois (Louise Marie Thérèse; 21 September 1819 – 1 February 1864) was a duchess and later a regent of Parma. She was the eldest daughter of Charles Ferdinand, Duke of Berry, younger son of King Charles X of France and his wife Carolina of Naples and Sicily, daughter of King Francis I of the Two Sicilies.

Louise’s father died when she was five months old. When her grandfather abdicated in 1830, Louise joined the rest of her immediate family in exile, eventually settling in Austria. As the granddaughter of the king, Louise was a petite-fille de France. Her younger brother, Henri, Duke of Bordeaux, was King of France and of Navarre from 2 to 9 August 1830, and afterwards the LegitimistPretender to the throne of France from 1844 to 1883.

Her father-in-law was the Duke of Parma for a few months. In March 1848 revolution broke out in Parma supported by King Charles Albert of Sardinia. Ferdinando Carlo escaped from Parma, but was taken prisoner at Cremona. He remained a prisoner at Milan for several months until the British government negotiated his release. After a brief sojourn on the island of Malta, he travelled to Naples and then Livorno where he was joined by Louise Marie Thérèse who had just given birth to their first son. Then the family sought refuge in England and Scotland.

In August 1848 the Austrian army entered Parma, and officially restored Charles II. Ferdinando Carlo and his family, however, remained in England, since hostilities continued between the Austrian and Piedmontese armies. For several years Charles II had considered abdicating in favour of Ferdinando Carlo, but he delayed in the hope that when he did so things would be more secure for his son.

On 24 March 1849 the abdication of Charles II was announced. Ferdinando Carlo, still living in England, succeeded to the title of Duke of Parma, Piacenza, and the Annexed States taking the name Charles III. On 18 May 1849 her husband re-entered Parma, but left again two days later. He did not take over the administration of the duchy until 25 August.

When her husband was murdered in 1854, Louise served as Regent for their young son, the new duke Robert I. Like the other rulers of the Central Italian states, she and her son were ousted during the Franco-Austrian War of 1859, and they retired to Austrian protection in Venice.

Various schemes following the war either for her and her son’s restoration in Parma, or territorial swaps which might leave them ruling over Tuscany, Modena, or the Romagna, came to nothing, as the whole of central Italy was annexed by Piedmont in March 1860. Louise lived out the remainder of her life in exile.

Queen Sophie of the Netherlands met Louise Marie in 1862 and described her in a letter to a friend:

The other day I made the acquaintance of the Duchesse de Parme, Count Chambord’s sister. She is much larger than Princess Mary of Cambridge, very small, but lively, agreeable, without bitterness after so many misfortunes. Her boys are dwarfs but full of French repartée and gaiety. I liked her and pity such a lot—murder and revolutions persecuting her since birth…

Louise died on 1 February 1864 at the age of forty-four in the Palazzo Giustinian in Venice. She was buried in her grandfather Charles X’s crypt at the Franciscan monastery Kostanjevica in Görz, Austria (now Nova Gorica, Slovenia).

Other members of the French Royal Family buried there include her brother Henri, Count of Chambord, her aunt Marie Thérèse of France, and her uncle Louis Antoine, Duke of Angoulême.

So on the above painting, at the age of around 31, she must already have had, at least, three of her four children, and maybe expecting her fourth – if the painting is indeed from 1850 and not later. In any case, it is a most flattering portrait. Especially shocking are the photos of her in later years. It makes you wonder: what happened? Was it because of the grief for her murdered husband? Was it even a happy marriage? Or was it due to stress of having to live in exile? Or did women in those days just age much more quickly and abruptly as most women do nowadays? Were it the four pregnancies in such short amount of time that wore her out so quickly?

This is the Duchess with her four children in 1865 (according to WikiCommons): 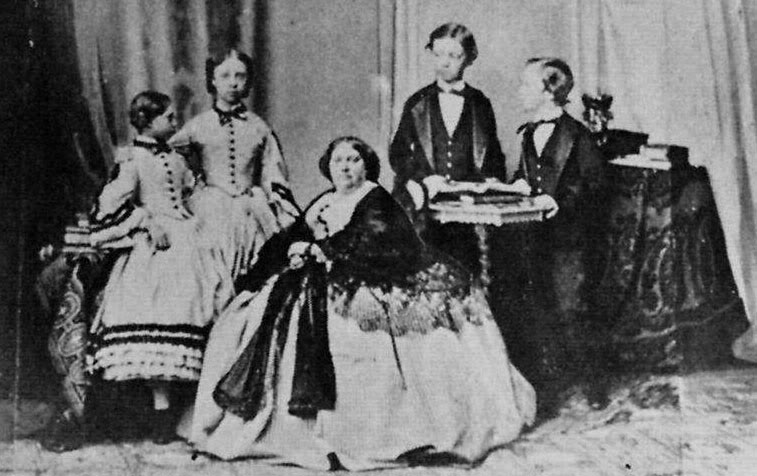 For sure this date is incorrect for the simple fact that the Duchess died in 1864. This might have been around 1858 or 1859? She looks so voluminous, seated thus in that dress. And this is the Duchess around 1860 (again, according to WikiCommons), believe it or not:

I would not have recognized her as the same woman of the painted portrait above which either really exaggeratedly idealized her beauty, or she truly suffered a great ordeal to have turned out the way she did, in such a short amount of time! But I’m inclined to think that the beauty of her painted portrait, like many portraits in those days, was far from reality. The only woman that I can say for sure measured up to the photographs was Sissi, Empress of Austria. In my opinion she was strikingly beautiful on the paintings as well as on the photographs. And then she was so wise as to ensure that in older age she was not to be photographed anymore, so that the world would always remember her as the beauty she once was.