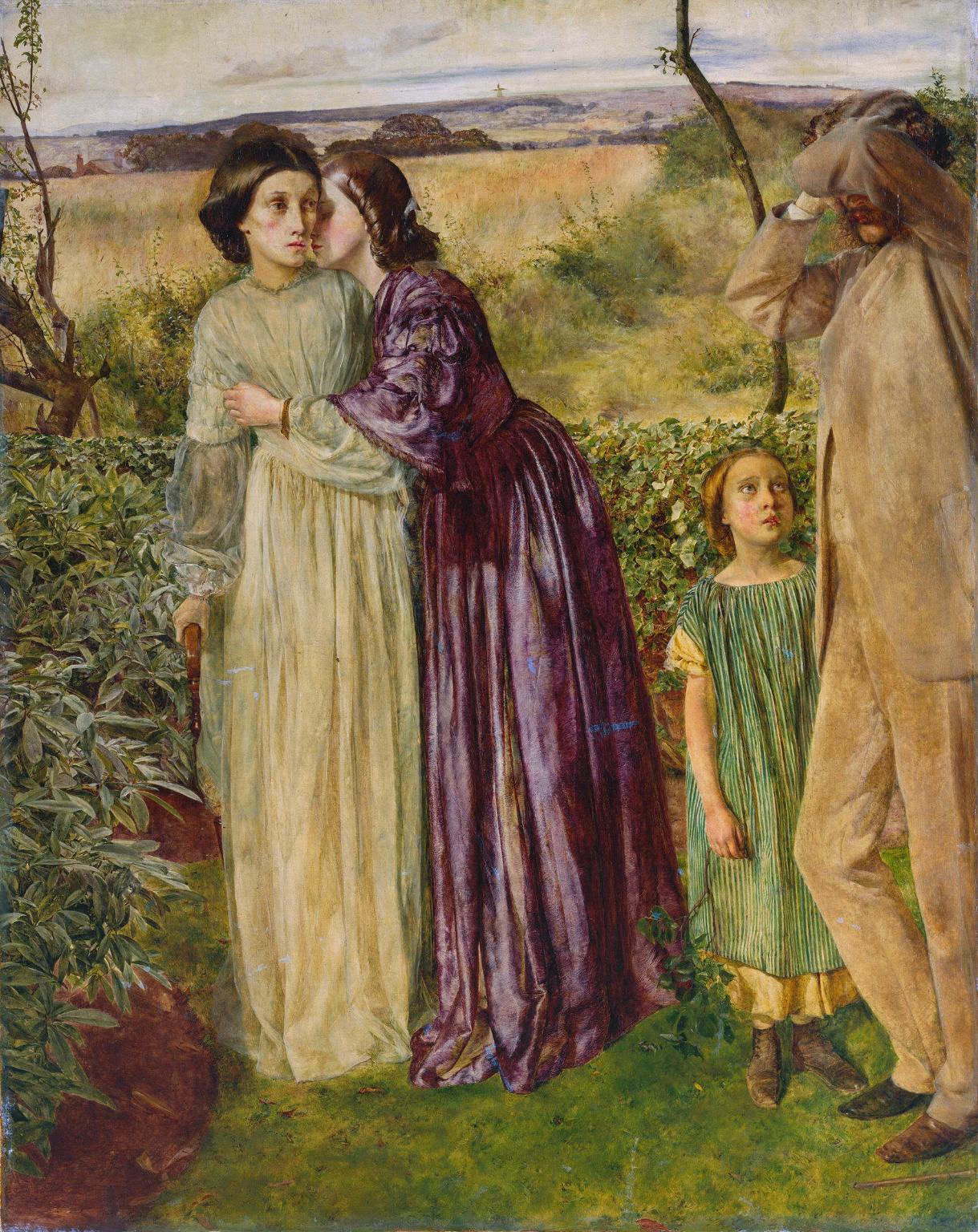 Too Late by William Lindsay Windus, 1858
.
This picture is typical of the sentimental subject matter favoured by some Victorian artists. When it was exhibited in 1859 it was accompanied by a quotation from Tennyson’s poem ‘Come not when I am dead‘:
.
– If it were thine error or thy crime
I care no longer, being all unblest;
Wed whom thou wilt, but I am sick of time;
And I desire to rest.
.
The woman on the left of the picture is dying of consumption and a broken heart. Her errant lover has returned to her side, but too late for them to enjoy any time together. She appears delicate and drawn and supports herself with a stick; all she desires is death and a release from her illness. Windus emphasises the woman’s unhealthy appearance by contrasting her pale clothes, lank hair and pinched features with those of her ringletted, rosy-cheeked companion. She is clearly agitated by the appearance of her lover, who hides his face in shame, symbolising his deceit.
.
The theme of the picture may have partly been suggested by Windus’s brother-in-law’s death from consumption in 1856. Sadly, Windus’s wife, Mary Tonge, was also to die prematurely, from cancer, in 1862. In this respect, his own marriage was perhaps also ‘too late’, since they were only together for four years.
.
Following the Pre-Raphaelite aesthetic of truth to nature, Windus painted much of the picture in the open air. The landscape setting was a view from a fellow artist’s garden at Liscard, near Birkenhead, looking south-west towards Bidston Hill, with the Welsh hills just visible in the background. A Mr Borthwick posed for the lover, but none of the other models have been identified.
.
The picture was bought by Windus’s patron, the Liverpool tobacco merchant John Miller, who was an early collector of Pre-Raphaelite art. Miller also owned the small sketch of 1857 on which the picture was based and which he lent to the Hogarth Club in 1857-8. Windus sent the picture itself for exhibition at the Royal Academy in 1859, where it was demolished by the critic John Ruskin (1819-1900). Ruskin recorded in his Academy Notes, ‘Something wrong here: either this painter has been ill; or his picture has been sent to the Academy in a hurry; or he has sickened his temper and dimmed his sight by reading melancholy ballads.’ Windus lacked self-confidence and was greatly discouraged by such criticism. He was naturally of a melancholy disposition and after the death of his wife in 1862 he withdrew into obscurity.
.
Frances Fowle, December 2000
source: Tate Museum