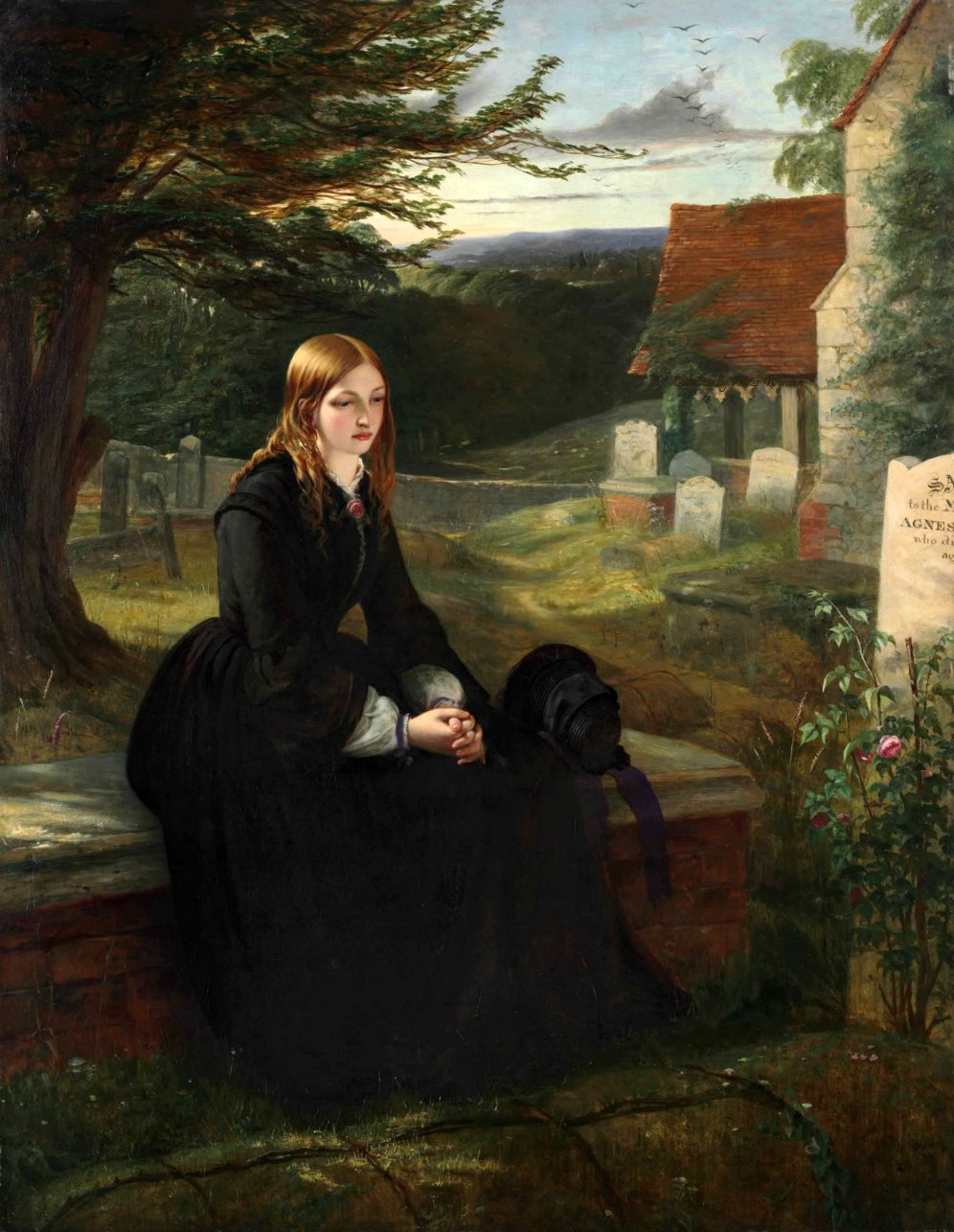 The Sister’s Grave by Thomas Brooks, 1857

The Sister’s Grave is an early masterpiece by the Victorian genre painter Thomas Brooks. Painted in 1857 and exhibited the following year, it is very much a work of its time, exhibiting a Pre-Raphaelite attention to detail. It is also characteristically skilful in its evocation of the required sentiment: although the scene Brooks depicts is essentially tragic – a young woman mourning at the grave of her recently deceased sister – there is a palpable sense of comfort and renewal conveyed by the loveliness of the surrounding landscape and the sunlit bulwark of the parish church.

Brook was born in Hull and, like so many provincial artists, came to London to train first at Mr Sass’s Academy in Bloomsbury and then at the Royal Academy schools as a pupil of historical genre painter Henry Peronnet Briggs, RA (1791-1844). Brooks then spent a few years in Paris, where he is recorded as studying much in the Louvre, before returning to Hull. He established himself as a portraitist, but the submission of two paintings to the Royal Academy – in 1844 and 1845 – attracted such critical acclaim that he made the move to the capital. His 1845 exhibit, The Village Student, a beautifully lit study of a boy reading, paid tribute to both Dutch 17th Century painting and its main English adherent: Sir David Wilkie.

Brooks’ style was to develop in this realist vein during the 1850s, and The Sister’s Grave shows it at its zenith. Light is paramount, and the resulting modelling of surface and texture creates an almost three-dimensional robustness. This sculptural clarity is consistent with the Dutch tradition that attracted early 19th Century painters, but the richness of colour palette and the narrative subject matter show Brooks to have been alike inspired by the Pre-Raphaelite Circle. This group of artists, headed by William Holman-Hunt and John Everett Millais, sent shock waves through the art world upon their public inception in 1848, but by the mid 1850s their style had proved itself to be the most generative influence upon contemporary practitioners.

Brooks himself was to focus upon subjects of acquiescence in the face of adversity during this period. The Sister’s Grave is roughly contemporary to his most famous work, Relenting, (1855; RA), which depicts a bailiff heeding the pleas of a young widow whose children are crowded into humble attic lodgings (this holds the artist auction record, making $79,000 at Christie’s New York in 2008). The following decade Brooks began to explore maritime subject matter, though still focused upon human interaction, and demonstrated his dramatic eye with ambitious compositions such as Launching the life-boat (1869; RA). In the 1870s and 80s Brooks also began to rely upon a prettified type of figurative genre. The rural setting and simple lifestyle evoked in his earlier work are replaced by a cast of richly attired women; his style, analogously, loses its meticulous quality and becomes more amorphous.

We do not know where The Sister’s Grave is set, but the mellow landscape with its rolling alternation of hills and woodland suggests the Southern Weald. Brooks has taken care to incorporate the beloved sister’s name on the gravestone. St Agnes is the patron saint of young girls and embodies chastity (as per Keats’s The Eve of St Agnes), but the derivation from the Latin agnus (Lamb) also connects the dead girl to Christ as the Lamb of God. The sibling relationship was important within Victorian culture, the sisterly bond perhaps especially so. Middle class sisters would share an education in home skills whilst their brother might be sent away to school, and be united in their hopes for marriage and idealised family life.

Brooks has picked out the subtlest of details in his depiction of the seated mourner: tears glimmer in her lower eyelids. Her hair is arranged flat to her head then falls in ringlets: this style predates the picture, being most popular in the 1840s, and may in this context confirm the wearer’s youth. Her black dress is typical of the mid 1850s however, with its natural waist and ‘trumpet’ sleeves flaring from the elbow. Mourning regalia only became fully part of Victorian culture following the death of the Prince Consort, in 1861, and our modern image of black-plumed horses and complicated costume specifications belongs to that subsequent period. (An entire department store devoted to mourning, Peter Robinson, was opened on Regent Street in 1868). The use of mauve alongside black – as in the ribbons that border the girl’s cuffs – had long been habitual mourning attire, however, whilst the rose pinned at her collar (presumably taken from the grave) throws the emphasis back upon her living self. The rose carried many meanings in the highly codified Victorian ‘Language of Flowers’, most of them generically feminine: such as grace, beauty, and love.

The pattern of woven briars, criss-crossing the grassy grave in tough yet orderly fashion, is a striking detail within the painting. The same device can be seen decorating other grave plots. Whether this was a custom with some practical purpose, such as thwarting gravediggers, or whether it has more symbolic import, such as representing Christ’s crown of thorns on the cross, is unclear and warrants further research.

The Sister’s Grave was well-received in the artist’s lifetime, eliciting praise from James Dafforne in his 1872 Art Journal monograph on Brooks, who called it ‘most impressively treated’.