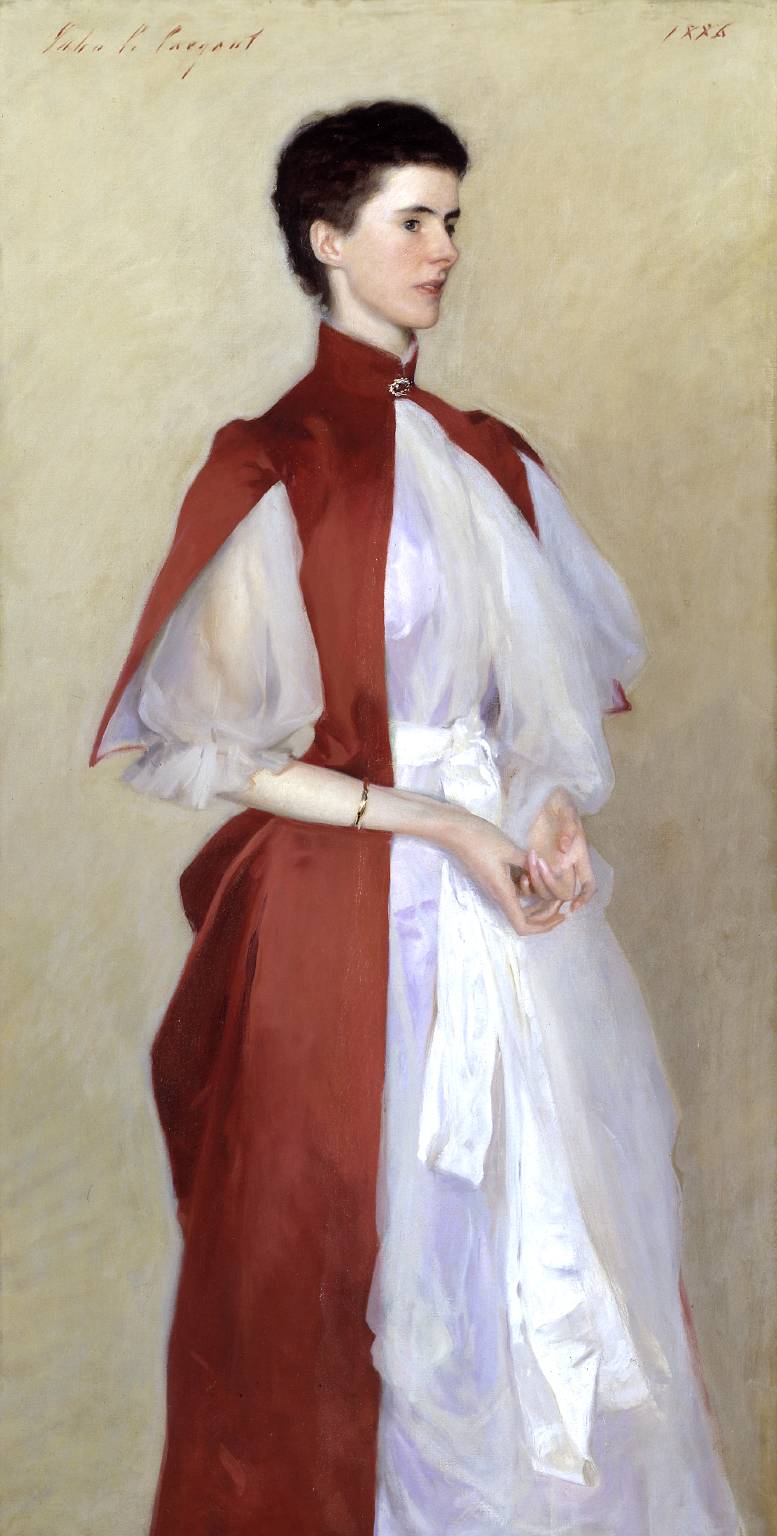 Mrs Robert Harrison by John Singer Sargent, 1886
.
Sargent moved from Paris to London in the summer of 1885. Finding it difficult to attract patrons, he turned to his friends and family for portrait commissions. He may have been introduced to the cousins Robert and Peter Harrison by Alma Strettell. The future wife of Peter Harrison, Strettel was a close friend of Sargent and, in 1877, he had illustrated her book, Spanish and Italian Folk Songs. Mrs Robert Harrison, née Helen Smith (c.1858-1936), was the daughter of a wealthy Tyneside businessman and politician. At the age of nineteen she married the stockbroker and musical connoisseur, Robert Harrison of Shiplake Court, Henley. The Harrisons, like many of Sargent’s patrons, formed part of the high society of late Victorian Britain. However they had unconventional tastes. For example in 1886, the year of this portrait, Robert Harrison also bought one of Whistler’s night time views of London, Nocturne in Blue and Gold: Old Battersea Bridge. At this time memories of the notorious libel case between Ruskin and Whistler which had taken place in 1878 were still alive in the public imagination (Ormond, p.144).
.
The Portrait of Mrs Robert Harrison was begun in 1886, shortly after Sargent had returned from a summer in France. Ormond has suggested that this painting is a bridge between the two dominant styles of late nineteenth-century French painting, Realism and Impressionism. The details of the head and hands are precise, yet the colouring of the portrait shows a move away from the old masterly emphasis of Sargent’s style, inspired by his friendship with Monet and the work of the Impressionist artists he had seen in France.
.
The change in Sargent’s style contributed eventually to the creation of a market for his portraits among members of London society, but approval came slowly. Following the exhibition of this portrait at the Royal Academy in 1886, The Athenaeum reported that ‘An exercise in white, red and grey; is, so far as this goes, excellent, although it is decidedly unpleasant as a household companion, and, for the owner’s sake, we hope unjust to the lady’ (Ormond, p.144). Her unusual dress was also commented upon. The columnist for the Evesham Journal and Four Shires Advertiser exclaimed that she had never seen Mrs Harrison ‘wearing such red wing-like appendages to her costume, which look as though about to expand and convey her to the regions of Mephistopheles’ (Ormond, p.144). Two years after this portrait was completed, Sargent painted the Harrison’s eldest son, Cecil (Southampton City Art Gallery). In contrast to the portrait of Mrs Robert Harrison, Sargent’s portrait of the ten year old Cecil was praised by the Art Journal for ‘the brilliance and purity of its flesh colour and for the truth with which the boy’s navy-blue costume has been represented.’ (Ormond, p.183)
.
Heather Birchall, December 2001