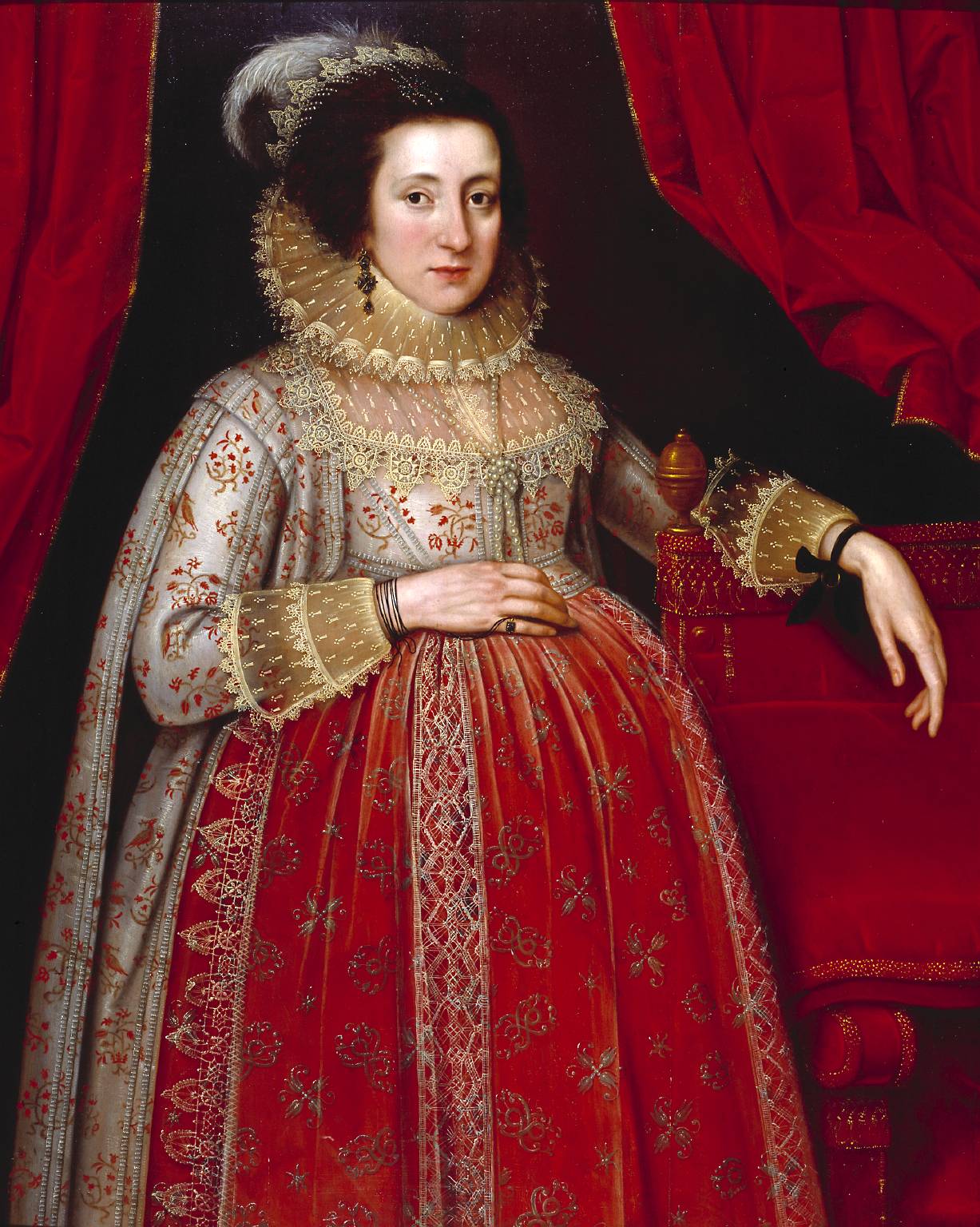 Portrait of a Woman in Red by Marcus Gheeraerts II ~ 1620

This portrait is traditionally thought to represent a lady of the Constable family, who were ancestors of the Dukes of Norfolk in the Herries line. If this is the case, she may be Anne, daughter of Sir William Roper, the wife of Sir Philip Constable Bt, of Everingham, Yorkshire. The elaborate pendant jewel above the sitter’s foreheard appears to incorporate an ‘R’, which could stand for ‘Roper’.

The painting is inscribed ‘1620’ above the left arm of the sitter, who is evidently very pregnant. Anne is recorded as having borne several children between 1618 and 1630. From the 1580s through to about 1630, what might be termed the ‘pregnancy portrait’ seems to have been a distinct sub-genre of British portraiture (see Hearn, 2000). Gheeraerts painted a number of these from the mid-1590s onwards, including other three-quarter-length images of heavily pregnant women, such as the newly acquired Portrait of an Unknown Lady, c.1595.

The reason for the brief vogue for this unexpectedly explicit mode of portraiture is unknown. At a time when a wife’s principal role was to bear as many healthy heirs as possible to perpetuate and extend a family’s name and influence, such a portrait would act as a form of visual evidence of anticipated dynastic success. At the same time, the childbirth process was potentially so hazardous that the portrait might also act as a record of the features of a beloved individual who could shortly die.

Although the pigments used for the reds in the present portrait have slightly faded, it is still a rich harmony of varying shades of this colour. Red textiles were both celebratory and a mark of high status. During the early seventeenth century, ladies were often portrayed wearing black threads or ribbons round their necks or, as here, their wrists. This sitter also wears a gold ring threaded through the black ribbon round her left wrist, which droops elegantly across the back of a scarlet-upholstered chair. The black string acts as a contrast to set off a lady’s fashionably white skin, but it was also sometimes used, as here, to anchor and display an item of jewellery which perhaps had a memorialising significance, having been inherited, for instance, from a deceased parent.

Marcus Gheeraerts the Younger was born in Bruges and was brought to England by his painter father, a religious exile from the Catholic Spanish Netherlands. By the early 1590s he was working for court patrons and his most celebrated painting is the large ‘Ditchley’ portrait ofElizabeth I (National Portrait Gallery, London). He was the favoured artist of Anne of Denmark (1574-1619), wife of Elizabeth’s successor James I, until about 1617, when he was superseded in fashion by Netherlands-trained new immigrant artists such as Paul van Somer (c.1576-1622) and Daniel Mytens (c.1590-1647). His last known works date from 1629-30.

The present composition confers on the sitter considerable dignity. Although the pose was by this date becoming a standard one, the soft modelling of the face, the elegant hands and the sense of impeccable balance between the shapes – for instance, in the way that the curtains at either side follow the outline of the figure – are highly characteristic of Gheeraerts’s later work.