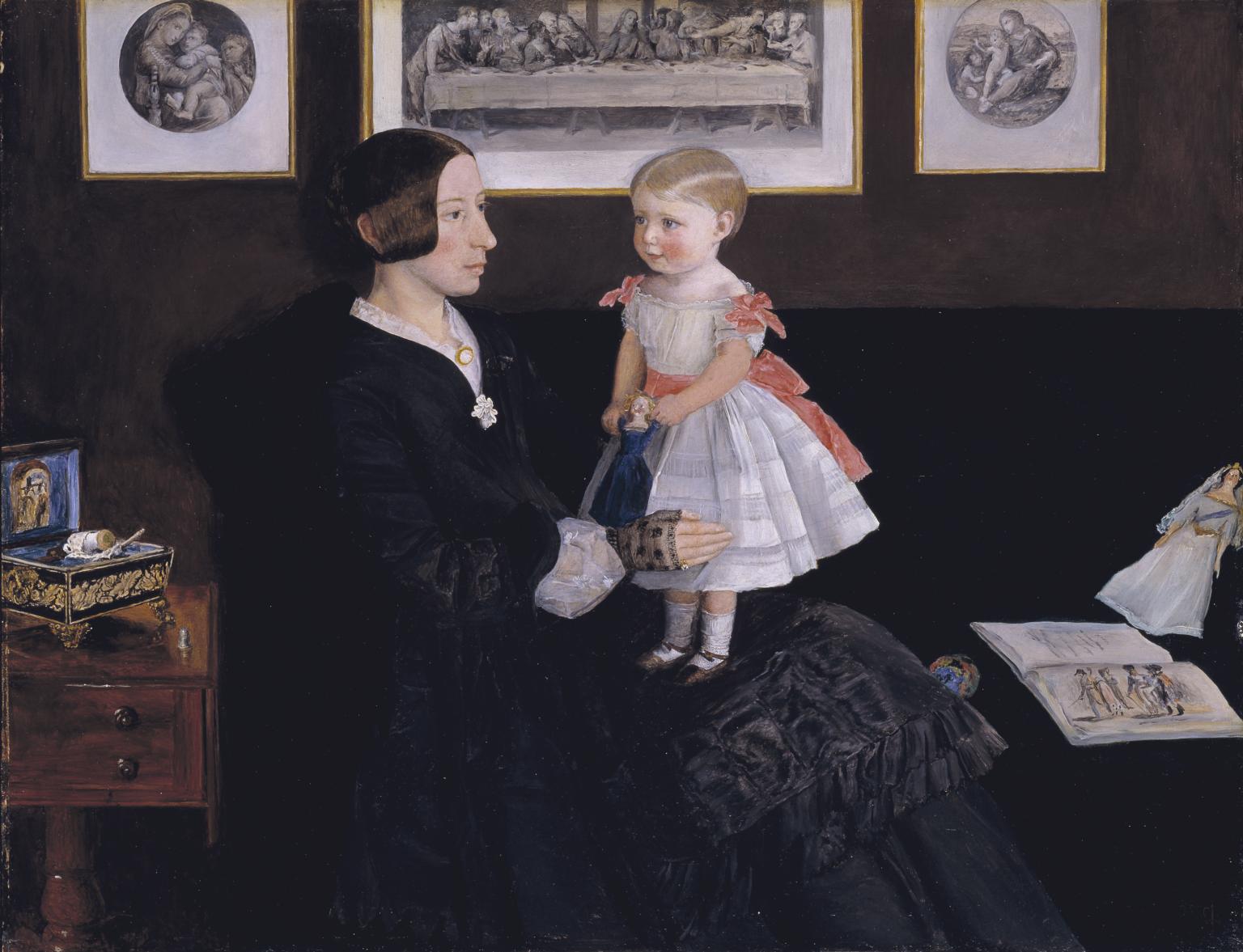 James Wyatt (1774-1853) was an Oxford collector, art dealer, print publisher, curator of the Duke of Marlborough’s collection at Blenheim, and Mayor of Oxford from 1842 to 1843. Millais evidently knew Wyatt by 1846 when he painted a watercolour of his grand-daughter Mary (private collection). Three years later Wyatt bought Millais’s painting Cymon and Iphigenia (collection Viscount Leverhulme) and commissioned a portrait of himself with Mary which was shown at the Royal Academy in 1850 (1849, private collection). This painting, intended as a pendant to the 1849 work, depicts Wyatt’s daughter-in-law Eliza Wyatt, née Moorman (1813-95) with her daughter Sarah, later Mrs Thomas (1849-1916).

The dating of the picture is uncertain. It may have been painted during Millais’s long stay in and around Oxford during the summer and autumn of 1850, when he was working primarily on The Woodman’s Daughter and Mariana. Millais stayed with the Wyatts at the beginning of this visit, in June, later moving to Botley before returning to stay with the Coombe family in Oxford in September. He did not return to London until November. Sarah Wyatt was born on 17 January 1849 and would have been about twenty months old by the autumn of the following year. There are, however, notes in the possession of the sitters’ descendants, probably made early in the present century by a son or nephew of Sarah, which give 1853 as the date of the work. The evidence for this date is unknown and there is no record of Millais visiting the Wyatts in Oxford that year. Judging from the child’s apparent age, a date of 1850 is more likely.

On the wall behind the sitters are, from left to right, prints after Raphael’s Madonna della Sedia, Leonardo’s The Last Supper and Raphael’s Alba Madonna. Millais disdained Raphael at this time, and used this portrait to set out his position as a Pre-Raphaelite. His stark, realistic portrayal of this mother and child contrasts sharply with Raphael’s soft, idealised depiction of the subject. When hung next to its companion portrait James Wyatt and his Grand-daughter, this work invites comparison with a very different sort of portrait of Eliza Wyatt by Sir William Boxall, a romantic depiction in a circular format, shown hanging on the wall at the top right of the portrait of Mr Wyatt.