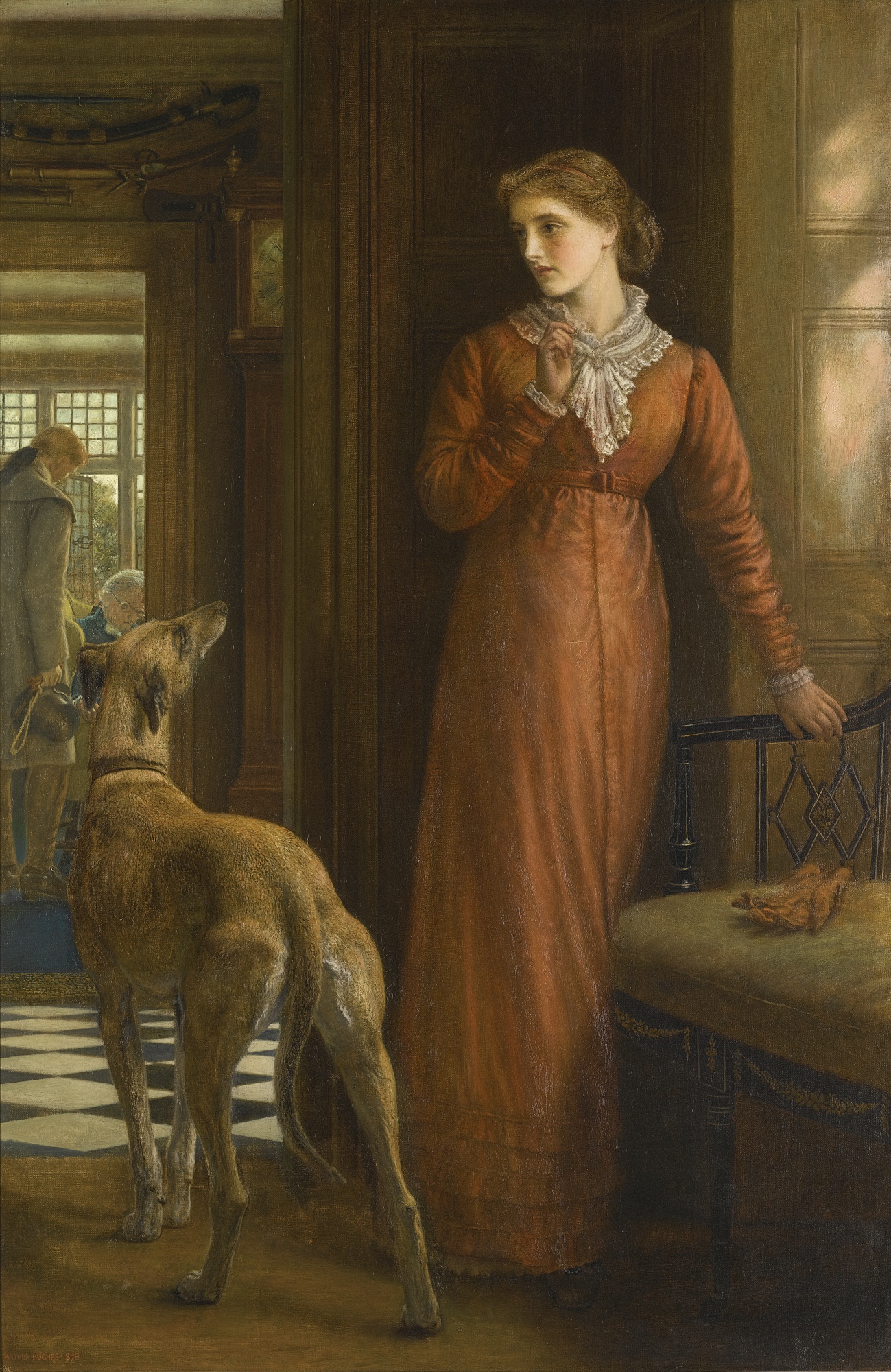 Uncertainty was exhibited at the Royal Academy in 1878 and was described by Dante Gabriel Rossetti’s brother William Michael, as depicting a ‘female figure perfect in sweetness and maidenhood… The damsel in question [is] blushingly modest and expectant while her suitor is “asking papa” in another room with its door… open. The lover’s fine greyhound, left behind during the colloquy, looks with confident affection at the young lady… Her salmon-pink dress is the chief colour-item…’ (Art Journal, 1878, pp.176-7)Some artists are blessed with beautiful daughters whose service can be called upon to pose for their pictures. Arthur Hughes probably painted his daughter Amy (later Mrs John Greville Chester 1857-1915) in Uncertainty. As a child she had charmed her father’s friend Lewis Carroll who took several touchingly sentimental photographs of her with her sister Emily and with her father. In 1868 the pretty eleven-year-old posed for her father’s Good Night (sold in these rooms, 19 June 1990, lot 26). She continued to model for her father occasionally and certainly appears in Our Daughter of 1874 (private collection) and probably also The Compleat Anglor of c.1884 (private collection). Comparison of her classically regular profile in these two latter portraits, with that of the worried young lady in Uncertainty, makes it compelling to identify her appearance again. If this was the case, it is touching that Hughes painted his daughter in a painting of this subject at a time when she was probably thinking of her own future: she married five years after it was exhibited.

Hughes’ painting recalls the socio-dramas of his friend John Everett Millais, particularly Trust Me, Yes and its companion No. Hughes met Millais at the Royal Academy Schools in 1846 when he was only fourteen. Millais’ pictures of troubled couples such as The Huguenot (private collection) and The Black Brunswicker (Walker Art Gallery, Liverpool) inspired Hughes’ most celebrated pictures April Love (Tate) and The Long Engagement (Birmingham Museum and Art Gallery), both ruminations on the transience of love. Hughes’ paintings also reflect the appetite for melodramatic love stories printed in contemporary periodicals such as Good Words, the pages of which he had been commissioned to illustrate. The sentiment expressed by the dog in the present picture probably derives from the loyal hound in The Long Engagement painted in 1858, and more than a quarter of a century after Hughes painted Uncertainty he painted a greyhound in the same pose looking adoringly at his mistress in Friends (private collection).

Uncertainty was owned by Sylvester Zefferini Poli (1859-1937), an Italian emigre who settled in America where he first worked as a wax sculptor in a similar manner to Madame Tussaud in Europe, before specialising in dime museums and curio shows. He rapidly expanded his business empire into vaudeville theatre and by 1916 he was the most successful theatre owner in the country. At the height of his success he owned almost thirty theatres and several hotels, including the Savoy in Chicago. It was probably the narrative drama of Uncertainty that appealed to Poli as a theatrical man and as someone with strong moral values who repulsed to put anything on his stages that he felt was corrupting or lewd – the strong message of fidelity in the painting would have appealed to him. The painting remained in the Poli family until relatively recently when it was rediscovered. Therefore it is listed as being untraced in Lionel Roberts’ excellent catalogue of Hughes work (it is included in his online addenda).