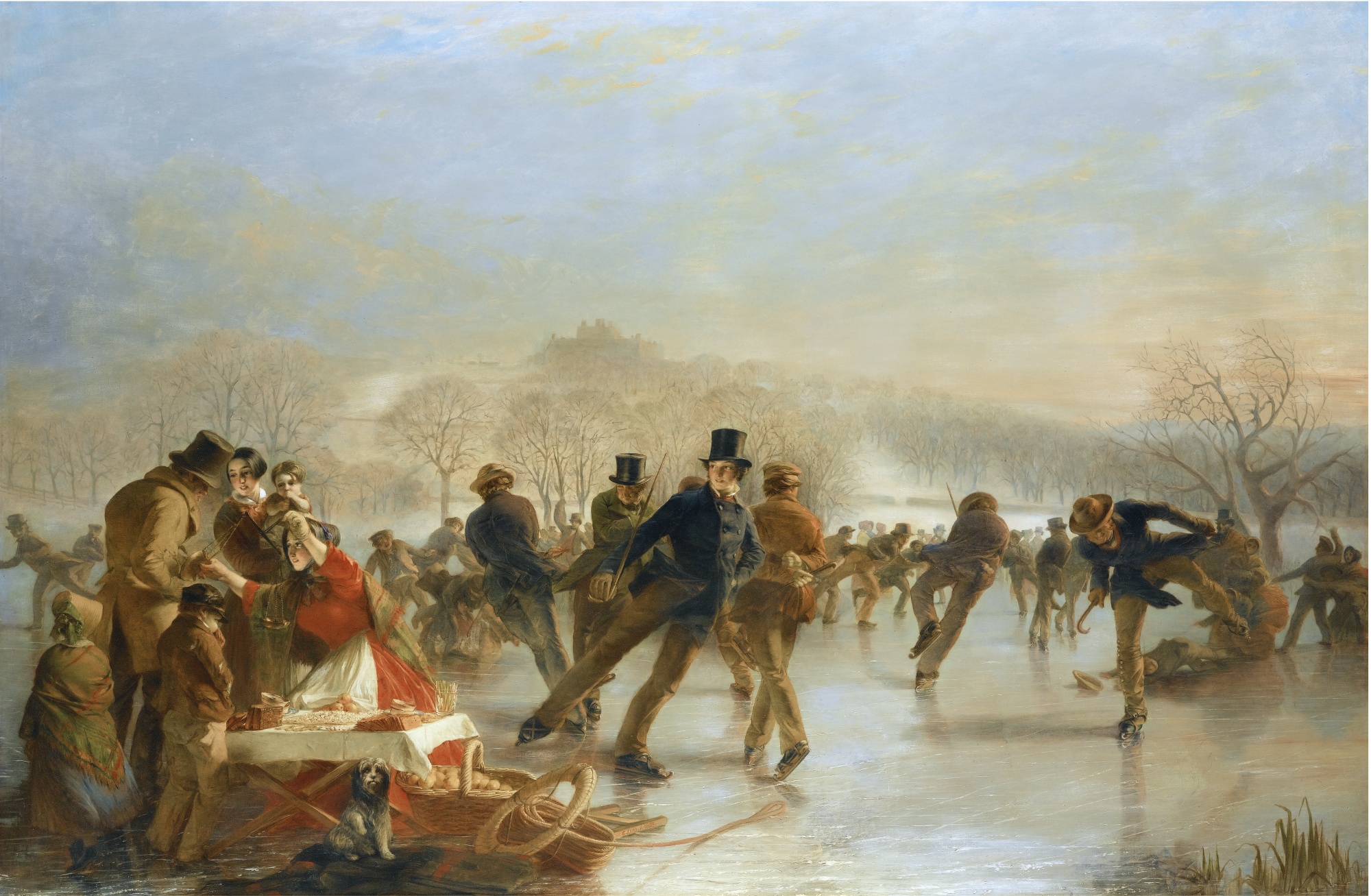 Skaters, a Scene on Duddingston Loch near Edinburgh by Charles Lees ~ 1853

‘Within the last few years the author of this work has made amazing progress in his art; all his previous efforts having been immeasurably distanced by his ‘Curlers’, – a large picture recently exhibited, and now being engraved; and also, and chiefly, by the present work, which is of the highest character in almost every desirable quality of Art.  The frosty atmosphere is delightfully rendered in the sky, and its effects upon the faces of the moving groups is marked with unmistakable correctness.  The “scene” is a crowded one; but no damaging confusion is apparent in the system of agroupment.  On the contrary, such features of the composition as naturally give value to it, are, without being frittered into disjointed fragments, skilfully preserved and made prominent, and impart a unity to the whole, in purpose, action, and character.  The skaters are thrown into bold and graceful poses, infinitely diversified; the folds and arrangement of their costume rustling in the breeze, truthfully indicate the velocity with which they are severally urged onward in the “roaring play.”  In the right foreground, a group, gathered around a girl selling fruit, is one of the most happily rendered passages in the composition, and seems besides, to be necessary as a relief to he bustling action in other parts.  The ‘Skaters’ is a work of careful study, excellent in design and expression, precious and harmonious in colour, and spiritedly and broadly handled.’ (The Art Journal, 1854, p.104)

Painted in 1853, the present work is the first and principle treatment of a subject which became a defining series of Lees’ career.  The picture’s success and reception can be gauged by the numerous works which followed in rapid succession; Skaters; Duddingston Loch By Moonlight, (RSA 1857, no.111)  now in the Fleming-Wyfold Collection, Winter afternoon: Curlers and Skaters on Linlithgow Loch  (RSA 1858, no. 24), Winter Day:  A Slide, Duddingston Loch (RSA 1859, no. 248), A Winter Holiday: Scene on the Ice (RSA 1860, no. 437) and Shinty: Scene on the Ice at Duddingston (RSA 1862, no. 381).

The beautifully realised figures display an amusing variety of character, from fallen children and flailing adults, through to the elegant gentleman in the central foreground whose competence is such that he can afford a sideways glance at the beautiful young stall holder who is selling her wares. With the silhouette of Craigmillar Castle on the horizon, the skillfully rendered atmospheric conditions evoke an unmistakable sense of seasonal celebration and frivolity.  It is possible that the more graceful skaters were members of the Edinburgh Skating Club, a society dedicated to figure-skating who regularly met at Duddingston, and whose members were made up of local professionals and landed gentry.  Founded in the 1740s It holds the distinction of being the earliest club of its type in the world.  To gain membership, applicants had to perform a figure of eight on alternate feet and then jump over a series of hats placed on the ice.

The skating club is strongly associated with Raeburn’s iconic portrait, The Revd. Robert Walker skating on Duddingston Loch.  Lees was born in Cupar, Fifeshire and was a pupil of Raeburn whose influence and inspiration is clearly evident in both the style and subject of the present work.