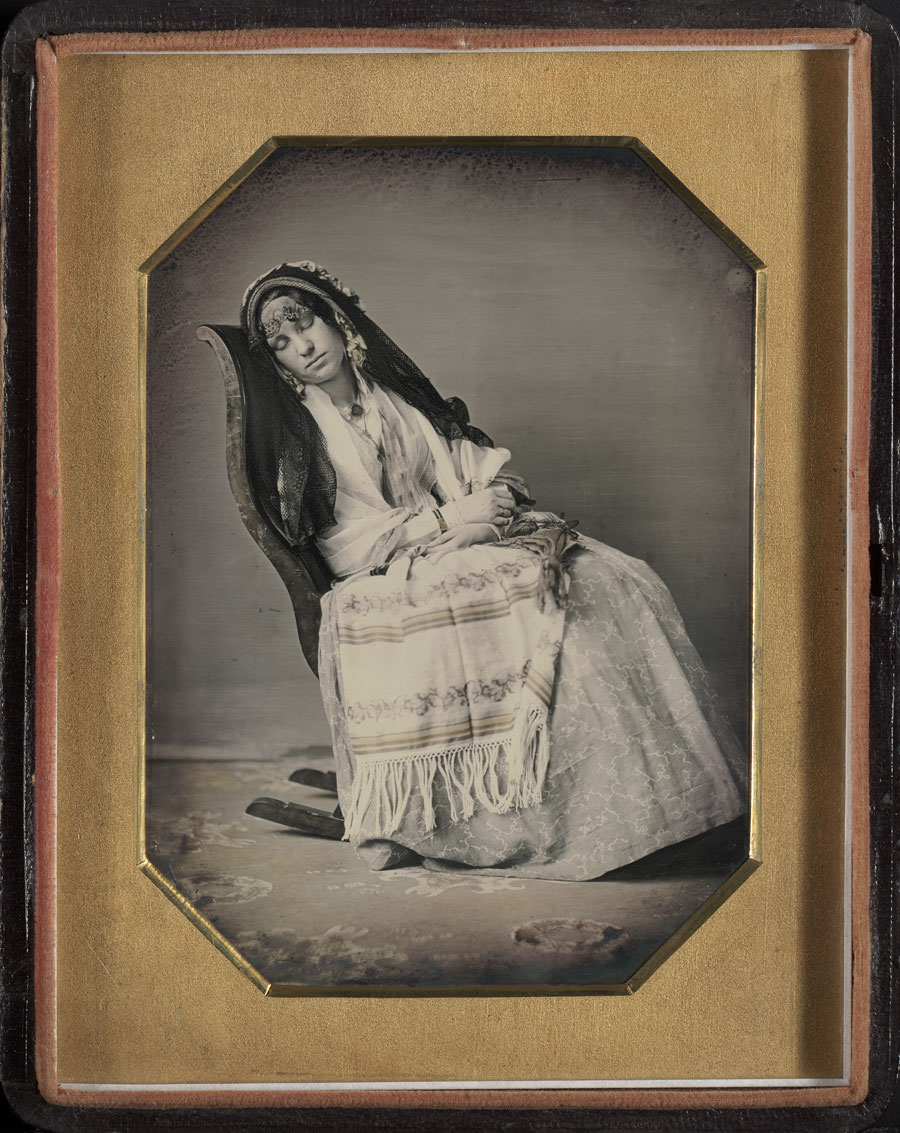 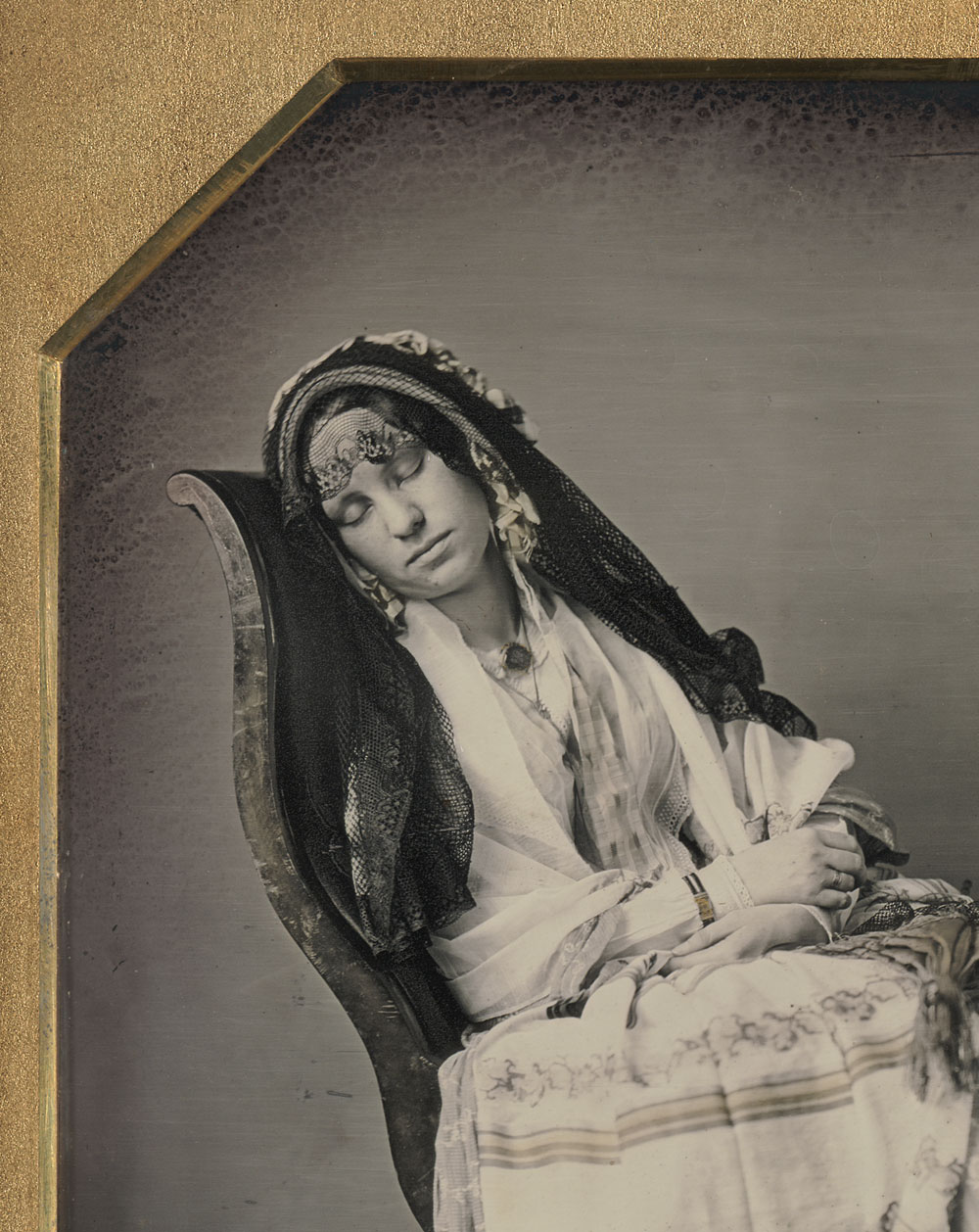 This is one of the most mystical and haunting Daguerreotypes that I have seen. The first question that comes to mind is no doubt whether the woman on the picture is dead or alive? Is it a post mortem photo or is she merely asleep? She looks very peaceful and most graceful. I found the answer to my question on the website of the International Center of Photography which shows a photo of David Collins with Frances Amelia Collins in old age! See photo below, by Thomas Collins. 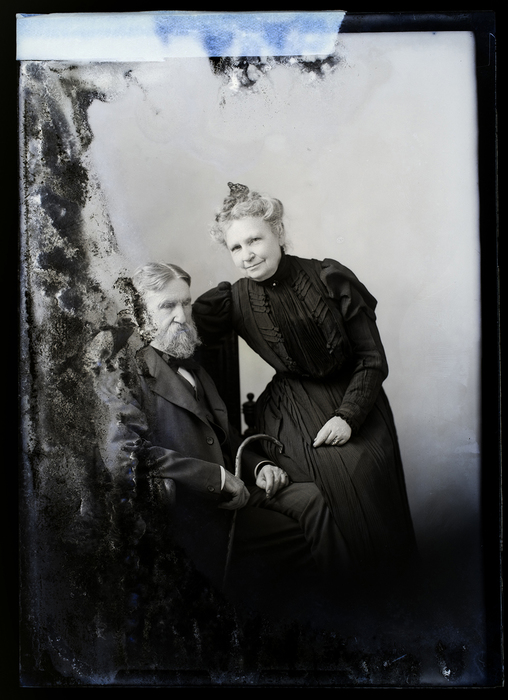 So certainly the photo of Frances Amelia with eyes closed is not a post mortem, but of a woman asleep or resting. I like the funny expression on her face in the later photo, as if she is laughing at me for even thinking that the above photo could have been a post mortem. It sure looked like one, at first glance. The photographers, David and Peter Collins, were brothers. I wonder what their relation was to Frances Amelia Collins Mitchell. Maybe she was one of their four sisters? And she was posing for her brothers, pretending to be dead? Or asleep, or daydreaming? Or maybe she was convalescent? Who knows… In any case she surely knows how to play the part for on the photo in the rocking chair she looks most spiritual. For me the image has a beautiful mise-en-scene which illustrates the brother’s talent for creating haunting images.

Frances is clad in a beautiful black lace veil that falls over her forehead. It is hard to see but underneath the black veil she wears a bonnet, you can see one of its broad loose ribbons hang loose in front of her bodice. She wears a ring on her ring finger and a thin long necklace which could be a pen necklace. Over her white undersleeves she wears a bracelet which could be hair jewelry, but it is hard to tell from the photo. It is hard to recognize, but on her lap lies her parasol, with a pair of black net gloves. It is hard to see what the bodice of the dress looked like, but for sure it was of the same fabric as the skirt, which has a very particular pattern. If you look carefully on the left side of the image you can see the same pattern of the skirt also on the piece of wide three-quarter-length sleeve that protrudes from underneath the white lace fichu shawl which is wrapped loosely around her shoulders, and the piece of the sleeve that sticks out on the right side of the image. You can clearly see the narrow white undersleeves with a small lace trim as well as the small lace collar adorned with a brooch. She might be wearing a chemisette underneath and the shape of her bodice and dress might have looked something like the dress on this illustration here. It seems like she is wearing two shawls, or rather a sheer white lace-trimmed fichu or pelerine and a long fringe-trimmed shawl to keep warm.

She really is a lady of mystery, shrouded in layers of veil, fichu and shawl! I still wonder though, why did the photographers choose to depict her thus, in a state of rest or daydream, while she was dressed for the outdoors, with a bonnet on and her parasol and gloves on her lap? One did not wear these things indoors. So I wonder, did she just get in from a long walk and fell asleep, or is she about to go out, but was too tired after all?

The magic seems completely disappeared on a later photo of Frances, also taken by the Collins brothers a decade later, somewhere in the 1860s (see photo below, from the website of the International Center of Photography). It is hard to believe it is the same woman. She has a completely different ‘aura’ about her.

And on the photo below she seems even more removed from the spiritual woman in the rocking chair. She looks more like someone you don’t want to get into a fight with… Shocking, what time can do to a person.

Seeing the above photo of Frances makes the first photo of her in the rocking chair even more special and magical, and the photographers even more skillful to have been able to capture such a magical moment in time.